Objective: To compare the effect of mobilisation with movement and Mulligan knee taping on anterior knee pain, hamstring flexibility and physical performance of the lower limb.

Methods: The randomised controlled trial was conducted from July to December, 2019, at the physical therapy department of Sahat Clinic, Rawalpindi, Pakistan, and comprise participants of both genders having patellofemoral pain who were randomised into mobilisation with movement group A and Mulligan knee taping group B. Both the groups were treated for 2 days per week for 2 consecutive weeks. Outcome was measured using the numeric pain rating scale, the Kujala pain rating scale, the active knee extension test and the time-up-and-go test. Assessments were taken at baseline, and at 2nd and 6th weeks post intervention. Data was analysed using SPSS 21.

Conclusion: Mobilisation with movement was found to be more effective in the treatment of patellofemoral pain and associated knee functional performance.

Patellofemoral pain (PFP), or anterior knee pain (AKP), is a common musculoskeletal disorder. It involves dysfunction in mechanical forces between the patella and the femur.1 Patients typically complain diffuse AKP which is caused by an increase in the compressive forces across the patellofemoral joint. Pain increases during activities like prolonged sitting, climbing the stairs or descending, kneeling and squatting.2 The worldwide PFP prevalence has been reported as 15-45% of population.3 Females are at two times higher risk of PFP than males, especially young active females.4 Literature is inconclusive with respect to its pathophysiology, but there are many biomechanical factors contributing to PFP, such as patella maltracking, imbalance in action of vastus lateralis and vastus medialis muscles, hip internal rotation, lower limb muscles inflexibility and rear foot eversion1 In rehabilitation sciences, numerous conservative management strategies for PFP have been suggested to address these predictive factors, including therapeutic exercises for muscular imbalances, patellar taping, various manual therapy techniques, patient education and activity modifications.5 A range of manual therapy techniques are effectively practised for the treatment of musculoskeletal disorders or dysfunctions.6 Mulligan's Mobilisation with Movement (MWM) is a routinely-applied pain-free manual therapy technique that involves concurrent application of painfree accessory mobilisation by a physical therapist along with active physiological movement performed by the patient. After this passive end range pressure or stretching is applied. To decide position for application of glide, which can be weight-bearing or non-weightbearing movements, depends upon the nature, severity and irritability of the condition.7 Hence, passive repositioning of joint's faulty positions combined with active movement is the underlying mechanism for this technique.8 MWM is proven to alleviate pain and enhance functional status in PFP patients, as they exhibit patellar maltracking along with incongruent joint surfaces, like positional faults.9,10 In contrast, Mulligan Taping (MT), also called Mulligan knee taping, is also an invaluable component in PFP management as it relieves pain and corrects the patellar alignment.11 MT is an emerging and newly-established alternative technique for PFP.12,13 It involves application of rigid tape spirally under tension around the knee while sparing the patella completely. Tibiofemoral rotation is altered this way, contributing to reduction of hip internal rotation, which is one of the contributing factors for PFP.13,14 The current study was planned aimed to compare the effect of MWM and MT on anterior knee pain, hamstring flexibility and physical performance of the lower limb.

The single-blind randomised controlled trial (RCT) was conducted from July to December, 2019, at the physical therapy department of Sahat Clinic, Rawalpindi, Pakistan. After approval from the ethics review committee of Riphah International University, Islamabad and being prospectively registered at www.ClinicalTrials.gov (NCT04173468), the sample size was calculated using OpenEpi Version 315 in line with literature9 while keeping the level of significance as 0.5 and power of the study 0.80. The sample was raised using non-probability purposive sampling technique16 from among patients of either gender aged 20-45 years with unilateral AKP persisting for over two months, giving pain scoring rate on numeric pain rating scale (NPRS) >3 during at least two activities. Those excluded were patients with Meniscus tears, bursitis, patellar tendon injury, ligamentous injury, joint degeneration changes, patellofemoral dislocation and / or frequent subluxation. Also excluded were patients having undergone lower extremity surgery, patients having knee pain referred from hip, lumbar spine and ankle joints, and those taking any pain medications. After taking written informed consent from the enrolled subjects, they were randomised into MWM group A and MT group B through flipping a coin and later the sealed envelope method as for keeping the participants blinded to their respective allocation. Prior to data-collection, permission was obtained from the administration of the clinic. Baseline assessment was taken with outcome measure tools that included NPRS, which measure pain on a 0-10 scale, having high reliability.17 The reliable 13-item Kujala pain rating scale (KPRS) evaluated over 100 points exploring pain and functional performance with score approaching 100 indicating less pain and better performance.18 The reliable active knee extension (AKE) test was used for hamstring flexibility assessment with a cut-off value of 160°; angle <160° being considered hamstring tightness, as objectively measured with universal goniometer.19 To evaluate functional performance and dynamic balance, the reliable time-up-and-go (TUG) test was used, with cut-off scores ranging from 8 to 11.5 seconds. Score >14 seconds indicated high risk for falling.20 Group A received straight leg raised (SLR) with traction and tibial gliding (TG) techniques. For SLR with traction, the patient rested in supine position, and the therapist grasped the patient's leg at the ankle level and applied traction longitudinally. Then lifted it up passively in extension for few seconds and returned to its initial position. This was repeated 10 times with 3 sets and 1- minute interval in between. Further, for TG, the patient was asked to be in the best pain-free position while maintaining active knee extension movement in supine position. The treatment started in non-weight-bearing position. With one hand on femur for fixation and other on tibia for gliding towards the tibia, the patient performed 10 repetitive active knee extensions, with 3 sets and 1-minute interval in between.8,9 After the application of MWM techniques, home exercises were advised for the next 6 weeks, consisting of stretching of hamstrings 8-10 times with 20 sec hold, strengthening of quadriceps and vastus medialis oblique (VMO) with 10 repetitions and 3 sets. In group B, MT was applied while the patient was in standing position and hips and knees were medially rotated and flexed to 20 degrees. A 38mm rigid tape was applied from the neck of fibula which was passing anteriorly over the tibia to secure internal rotation of tibia at the knee, and passing below the medial joint line and behind the knee. Finally, the tape ended over the anterolateral aspect of femur. Maximum tension was applied when passing below the medial knee joint line. Once the patient assumed the standing position, tension in the tape increased, altering tibiofemoral tension and inducing hip in external rotation. Tape was applied for only two days per week. Patients were thoroughly screened for skin allergy and instructed to take the tape off immediately if any pain, burning or skin irritation was experienced. Patients were guided and advised on homebased exercise, including stretching of hamstrings 8-10 repetitions with 20 sec hold, strengthening of quadriceps and VMO with 10 repetitions in 3 sets.12,13 In total, 4 treatment sessions were held; 2 visits per week for 2 consecutive weeks. Detailed assessment was taken at the end of 2nd and 6th week post-intervention. Data was analysed using SPSS 21. Shapiro Wilk test was applied to check normality of data. Non-parametric tests were applied at p<0.05. Mann Whitney U test was applied for inter-group comparisons, and Friedman test with 0.05 level of significance was applied for intra-group analysis. 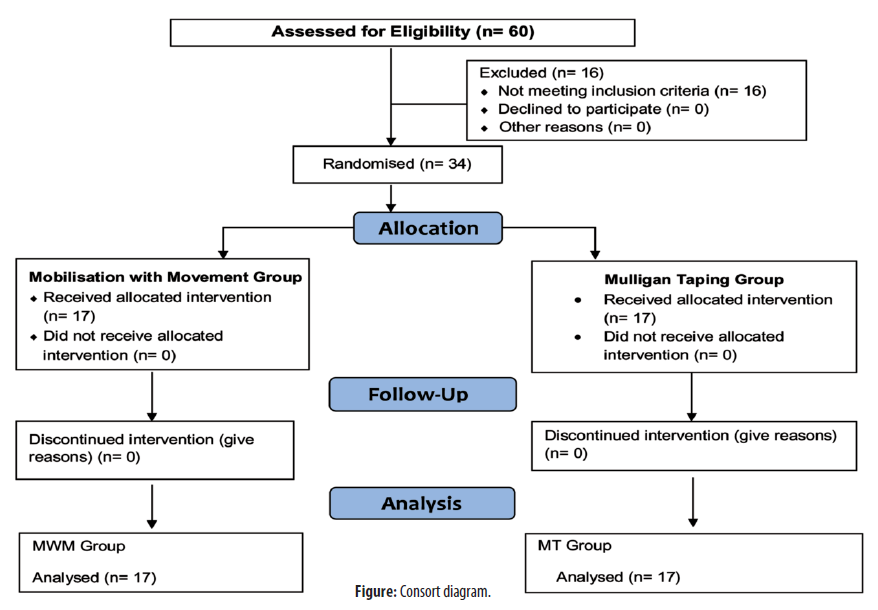 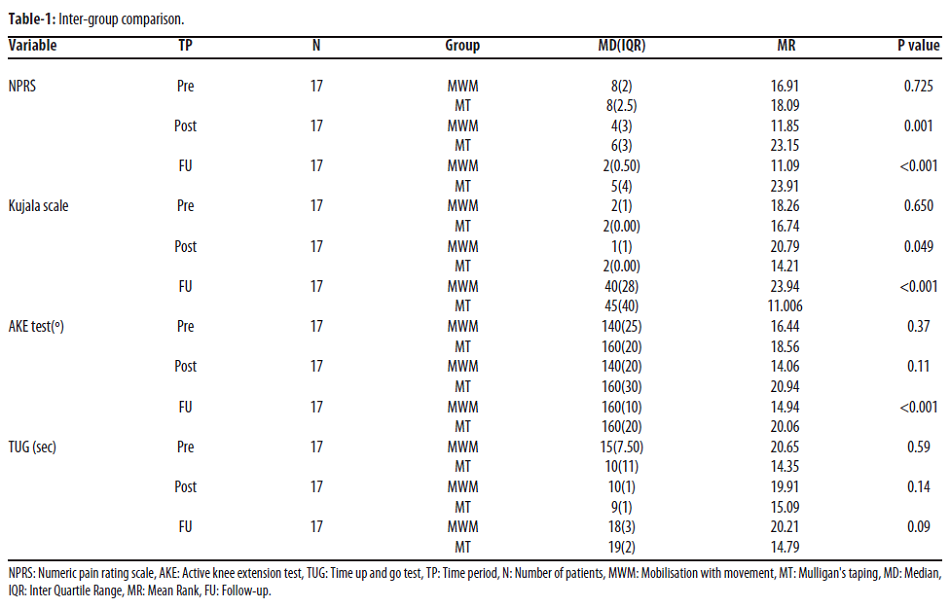 In intra-group comparisons, both the groups showed a significant difference (p<0.0001) for all outcome variables post-intervention (Table-2). 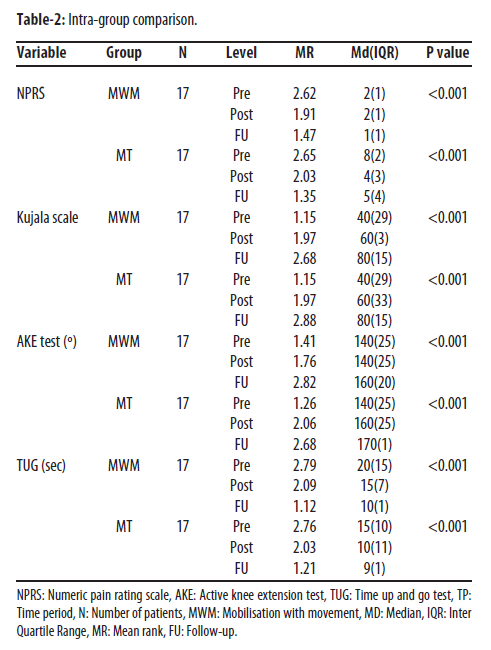 The results indicated that MWM technique was more effective for improvement in knee pain and functional performance compared to MT at both post-intervention assessments. Patients who had received MT showed significant improvement in AKE test at 6-week follow-up. In addition, both groups had significant recovery across all parameters. MWM technique has previously proven its efficacy on various peripheral joints with positional faults and altered arthrokinematics, resulting in joint pain.12,21-23 In PFP syndrome, it has been proposed that increased mechanical compression of patella against femur exhibiting altered arthrokinematics could be the source of anterior knee pain. Abnormal mechanical muscle pull due to weakness of quadriceps and tightness of hamstrings is also considered a source for increased patellafemoral joint compression. Simultaneously, muscular imbalances amongst vastus medialis, vastus lateralis and illiotibial band are considered predictors for patellar maltracking in PFP syndrome.1 Corroborating evidence suggests underlying neurophysiological factors along with decreased kinesiophobia to be the mechanism for pain reduction in MWM.11,21 The current study also favoured MWM for reduction in NPRS scores compared to MT, as was the case with earlier studies.9,10 In addition, rapid improvement in Kujala score, which is specific for PFP and knee functional performance, were found in both groups over 2 weeks. Contemporary evidence support this finding.9 In the current study, both treatment techniques improved hamstrings flexibility in terms of greater range of AKE measured by goniometer over a period of 6 weeks. But comparative analysis indicated greater flexibility in the MT group. Further findings indicated no inter-group difference for TUG test, although intra-group analysis suggested subsequent improvement in terms of less time in accomplishing the test. The result is again supported by the literature.9 The current study has some limitations, including lack of inactive or placebo control group in the design, and failure to do double-blinding of the trial. It was a singlecentre study. Participants' body mass index (BMI) information was not uniformly taken. Further research is needed to explore the mechanism of these techniques with some imaging methods to objectively determine any positional change in the joint. Long-term effects of both treatments need to be established as well.

MWM was found to be more effective for treating patellofemoral pain and functional activities of knee. MT was found to be a promising option to enhance hamstring flexibility.

11. Pawar BR, Jeganathan A, Monisha R. A Comparative Study to Determine the Effectiveness of the Taping and Mulligan’s Mobilization with Movement Techniques on Pain in Knee Osteoarthritis. Indian J Public Health Res Dev. 2019; 10:75-12.

22. Collins N, Teys P, Vicenzino B. The initial effects of a Mulligan's mobilization with movement technique on dorsiflexion and pain in subacute ankle sprains. Man Ther. 2004; 9:77-82.

23. Teys P, Bisset L, Vicenzino B. The initial effects of a Mulligan's mobilization with movement technique on range of movement and pressure pain threshold in pain-limited shoulders. Man Ther. 2008; 13:37-42.