Insular gliomas most commonly present with drug-resistant seizures, irrespective of the tumour grade. Even though surgery is the mainstay of treatment, complex anatomical location and close proximity to eloquent cortex makes surgical resection difficult. Herein the authors have reviewed the literature with regards to seizure control after surgical management of these tumours. The review does not address quality of life, or survival benefits of surgery. In summary, excision of these gliomas significantly improves seizure control, and extent of resection along-with trans-cortical approach are important predictors of seizure outcome.

Insula, often referred to as the fifth lobe of the brain, is a common site for gliomas; 25% of intracranial low-grade (WHO Grade I and II) and 10% high-grade gliomas (WHO Grade III and IV) are present in the insular region.1 Due to its challenging anatomy, being covered by the three opercula; frontal, temporal and parietal, and its close vicinity to eloquent areas and important vasculature (middle cerebral artery and its branches including the lenticulostriate arteries), surgical management of insular gliomas is challenging (Figure 1,2).2,3 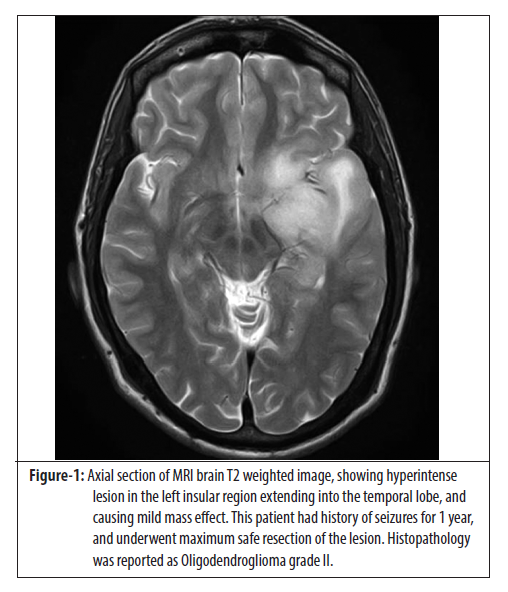 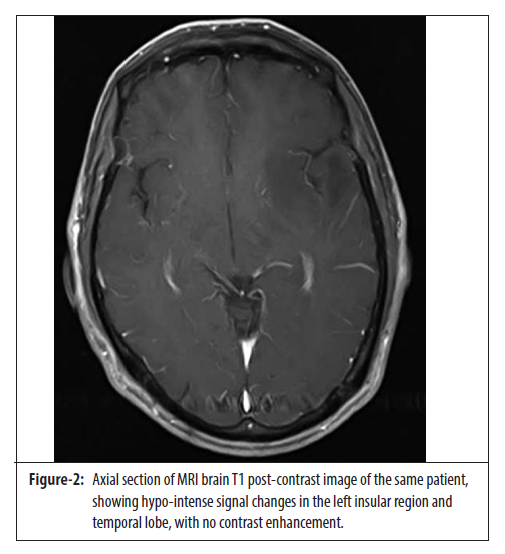 Apart from a variety of presenting symptoms, insular gliomas often tend to be epileptogenic due to the complex neural connections present there, resulting in worsening quality of life and cognitive impairment.1,4 Low grade insular gliomas have a higher likelihood of causing epileptic seizures (more than 80%) than high-grade insular gliomas. Incidence of these seizures can be dependent upon tumour grade, type and location, with low grade gliomas having a higher likelihood of seizures (more than 80%) than high grade gliomas.5

Few studies have reported outcomes with regards to seizure control after glioma resection, and different factors have been attributed to affect seizure control without consensus. We have reviewed the literature to evaluate and summarize the current evidence on seizure freedom after surgical resection of insular gliomas.

In one of the earliest studies, Von Lehe et al., retrospectively reviewed 24 patients who had undergone surgical resection of insular lesions for epilepsy.6 Eleven (45.8%) patients in their series had non-neoplastic lesions, whereas 13 (54.2%) patients had glial/glioneural tumours.6 The mean follow-up time in their study was 37.5 months.6 Seven (29.1%) patients had sub-total resection of the tumour due to eloquent area involvement, while rest had gross total resection.6 They used the International League against Epilepsy (ILAE) classification to assess seizure outcome, and reported that 15 patients were totally seizure free (62.5%, ILAE 1) and 4 more patients had a significant seizure control (ILAE 2 & 3) at follow-up.6,7 Tamara et., al studied predictors of 12-month post-operative seizure control in 52 patients with low grade insular glioma presenting with drug-resistant epilepsy (failure of seizure control with 2-3 anti-epileptic drugs or AED therapy, as per the ILAE definition). Thirty-five (67.31%) patients had attained complete freedom from seizures, 4 (7.69%) had rare seizures, 8 (15.38%) had meaningful improvement and 5 (9.62%) had no improvement. They concluded that infiltrative low-grade gliomas had worse seizure control, and more than 90% extent of resection was a predictor of good seizure outcome.8

In a retrospective case series, Baran et al., studied trans-opercular approach for resection of insular gliomas and long-term seizure control.9 Among the 22 patients in their study, 15 (68.1%) had presented with seizures, and 18 (81.8%) had low grade gliomas.9 Awake craniotomy was performed in 11 (50%) patents, and gross total resection was achieved in 6 (27.3%) patients.9 The average follow-up time was 33 months. They reported that 20 (90.9%) patients were seizure free, with 19 patients on one AED and one off AED, at last follow-up.9 They also found that that the use of ultrasonic aspirator and neuro-navigation during surgery improved safety.9 Khatri et al., performed a retrospective analysis of 41 patients operated for high grade insular gliomas at their center.10 Thirty-three (80.5%) patients had excellent seizure control (ILAE 1A) at a mean follow-up of 18.4 months, with more than half of them, 24 (58.5%), on a single AED.10 They concluded that trans-cortical approach had better seizure outcomes than trans-sylvian approach.10

Wang et al. published the largest retrospective case series comprising of 109 patients who had presented with seizures, and were operated for insular gliomas.3 Pre-operative seizure duration was 6 months (median), and majority (77%) had frequent seizures. Refractory seizures were present in 84 (77%) patients.3 Almost half (52, 48%) patients had more than 70% extent of tumour resection, and 48 (44%) patients underwent a second surgery after tumour progression. The median follow-up in their series was 48 months. They reported freedom from seizures in 74 (68%) patients, at 1 year from surgery.3 Extent of tumour resection was found to be a predictor of seizure control, and seizure recurrence was associated with disease progression.3 In another similar, recent retrospective analysis of giant insular gliomas, Rossi et al., studied 95 patients, of which 70 (73.7%) had undergone gross total resection.11 They concluded that suboptimal tumour resection was associated with inadequate seizure control after surgery.11

Surgical excision of insular glioma leads to effective seizure control in majority patients. Extent of resection is the single most important predictor of favourable seizure outcome, and recurrence of seizures is often associated with recurrence or progression of disease.