Endemic Syndromes associated with Diabetes – A call for Awareness, recognition and management in India and beyond

Diabetes mellitus has reached pandemic proportions throughout the globe. Though hyperglycaemia is the hall mark feature of diabetes, there are several variations in its etiology, clinical presentation, and associated complications. Some of these variations have been distinctly described in specific regions and ethnicities across India and other regions in the world. In this commentary we describe these endemic syndromes associated with diabetes to improve their awareness, recognition and management. A focused attention on these relatively neglected clinical challenges would encourage future discussion and research to address these conditions.

Diabetes mellitus is a heterogenous syndrome which can fox the clinical observer with its wide spectrum of etiopathology, clinical features, natural history, complications and management strategies. Contemporary guidelines from international organizations attempt to do justice to this diversity, by crafting evidence-based recommendations which are relevant to a global audience. However, there are many clinical situations which occur in limited or isolated pockets. These may include unique etiologies of diabetes, specific comorbidities or related to its complications. They often require a person centric response and specific therapy. In this commentary, we have listed and discussed these endemic syndromes in diabetology to improve their clinical recognition. A focused attention on these relatively neglected clinical challenges may encourage future discussion and research to address these conditions. (Figure) 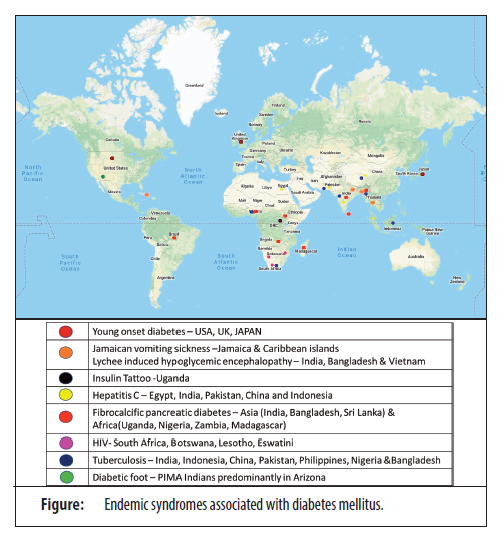 Diabetes itself has been considered endemic to a few ethnicities. A century ago, diabetes was thought to be a Jewish disease, both in continental Europe and in the United States of America. This was separate from the increased susceptibility of Ashkenazi Jews to metabolic disorders. Observers in India mentioned that diabetes occurred in migrant Marwari population in Calcutta, suggesting that it was endemic to their population. In Africa, diabetes was considered non-existent, and it was thought that the syndrome was endemic to those having a Caucasian descent.1

Contemporary scientific and lay discourse uses the words ‘pandemic’ and ‘epidemic’ to describe the epidemiology of type 2 diabetes. It is also possible to evaluate diabetes as an endemic disease. A diabetes endemicity index has been proposed in this regard, which utilizes the relative prevalence of prediabetes and diabetes to assess whether a particular geographical area can qualify to be mentioned as a diabetes endemic zone.2

Modern medicine also recognizes the heterogeneity of diabetes, with differing clusters having been identified on the basis of genophenotypic profiling. The classification of diabetes is also open to improvement, and updates are expected in this field.

Endemicity with respect to different types of diabetes

FCPD was characterized by onset during childhood/adolescence/young adulthood, moderate to severe hyperglycaemia, high insulin requirement, resistance to ketosis, associated exocrine pancreatic dysfunction, and pancreatic calcification. Proposed etiologies included consumption of cassava as a staple food, and malnutrition per se. PDDM was characterized by a similar age of onset and clinical features, with a low body mass index and history of childhood malnutrition.3

Though current classifications of diabetes do not list these conditions, they continue to be recognized in certain areas of the world, including India and Ethiopia. It is rational, therefore, to include MRDM as an endemic syndrome in diabetology.

A newly recognized entity, post-immuno therapy new-onset diabetes (PINOD), is induced by drugs used in oncology. Programmed cell death-1 ligand 1 (PD-L1) inhibitors nivolumab, pembrolizumab and durvalumab, are associated with the development of new onset diabetes. Though it is difficult to justify terming PINOD as endemic, its occurrence in a limited subset of patients, in a few tertiary health care ecosystems, allows its inclusion in this discussion.5

Jamaican vomiting sickness, or toxic hypoglycaemic syndrome, is a form of hypoglycaemia that is endemic endocrine to Jamaica and other Caribbean islands. It is also found in some west African countries. Intake of the unripe Blighia sapida fruit (ackee fruit) leads to inhibition of neoglucogenesis and severe hypoglycaemia. Clinical manifestations of this sometimes fatal disease include vomiting abdominal discomfort, convulsions, delirium, dehydration shock, hepatitis, and coma.6

Jamaican vomiting sickness hypoglycaemia is due to hypoglycin A and hypoglycin B, which are found in the unripe fruit or arils of the ackee tree. Hypoglycin A gets metabolised to methylencecyclopropylacetic acid (MCPA), which inhibits the beta oxidation of fatty acids. This provides glucose and glycogen for the body’s energy needs, but also depletes a cofactor that is necessary for gluconeogenesis. This leads to hypoglycaemia and its clinical presentation. Management is by intravenous dextrose, with octreotide having been shown to have beneficial effects through its insulin suppressive effects.

A similar environmental disease, lychee induced encephalopathy, is endemic to some parts of India, Episodes of acute encephalitic fever, that coincide with the annual harvest of Litchi sinensis (lychee fruit) have now been identified as being due to hypoglycaemia. Identified in Vietnam and Bangladesh as well, the pathogenesis of lychee-induced hypoglycaemic encephalopathy is similar to that of Jamaican vomiting sickness. The condition is more common in malnourished children. Prevention of this endemic disease entails optimal nutrition among children with diabetes, and avoidance of over-eating of the lychee fruit, especially by malnourished children.7

The complications of diabetes are myriad, and occur in various forms. Chronic complications are more common in people with poor control and occur more frequently in health care systems that are unable to provide optimal care. There are certain complications that are reported relatively more often from specific countries. Mauriac syndrome and the syndrome of limited joint mobility with its Namaste sign, have been often documented in India.8

Presentations of diabetic foot may be endemic to specific locations or populations, based upon the lifestyle. Tailor foot (bunion of the foot), for example, is common in Asiatic cultures where sitting in cross-legged posture is common. Pilgrim’s foot (blisters of the sole) is ‘endemic’ to pilgrims who under take long journeys barefoot, often for religious purposes. Silencer foot is common in persons living with diabetes in northwest India and Pakistan: the heat of the silencer of the motorcycle scalds and wounds the medical aspect of the calf in persons with sensory neuropathy, leading to a difficult to heal, painless neuropathic ulcer, which may get secondary infection.9

High amputation rates have been reported in some ethnic groups like the Pima Indians, making limb amputation an endemic syndrome of sorts.

A saddening report two posthumous deliveries, by Caesarian section, in young women with type 1 diabetes, suggests that maternal mortality due to uncontrolled diabetes may be endemic, yet unrecognized, in underserved populations.

Many people with diabetes, especially uncontrolled diabetes, have comorbidities. These may be acute or chronic, and metabolic or non-metabolic. The non-metabolic comorbid conditions include infections such as tuberculosis, HIV/AIDS (human immunodeficiency virus/ acquired immune deficiency syndrome) and hepatitis C. Though these infections occur across the world, they are found in greater prevalence in particular countries. The term “syndemic” has been used to describe the occurrence of these illness along with diabetes. We include these infections as endemic syndromes in diabetes, keeping in mind that they are endemic in specific geographical pockets.10

Hepatitis C is a blood-borne viral infection which has been identified as a risk factor for both type 1 and type 2 diabetes mellitus While both diabetes and hepatitis C virus (HCV) occur worldwide, HCV is most frequent in Egypt, India, Pakistan, China and Indonesia. These countries also happen to a have a high burden of diabetes, which makes it imperative to focus on this “syndemic syndrome”.

HCV infection leads to insulin resistance, which can further lead to diabetes. Chronic HCV increases the risk of developing autoimmune diseases, including type 1 diabetes. Therapy for HCV can also be associated with drug- induced dysglycaemia. Persons with diabetes who contract HCV experience an increased risk of cirrhosis, suboptimal response to treatment, and greater chances of developing hepatocellular carcinoma. Cooccurrence of diabetes and HCV creates a challenge for glycaemic control as well, with most oral glucose-lowering drugs being contraindicated in severe hepatic failure.

HIV is a blood borne viral infection which, if unchecked, leads to full blown AIDS. HIV is endemic to certain countries, including South Africa, eSwatini, Lesotho and Botswana.

Persons with HIV are more likely to have type 2 diabetes. Both insulin resistance and insulin deficiency contribute to the pathogenesis. Persons living with HIV may also find it challenging to inject insulin and dispose off insulin syringes and needles. Concurrent substance abuse can also contribute to dysglycaemia in persons with HIV. Use of highly active antiretroviral therapy (HAART) may be associated with metabolic dysfunction, including dysglycaemia and lipodystrophy. This is especially common with protease inhibitors like indinavir and nucleoside reverse transcriptase inhibitors such as stavudine, zidovudine and didanosine.

Tuberculosis and diabetes together have been termed as “the dual epidemic”. While it is estimated that one fourth of the world’s population is infected with tuberculosis, the majority of patients are found in eight countries: India, Indonesia, China, Pakistan, the Philippines, Nigeria, Bangladesh and South Africa. These countries are also hotspots for diabetes, and their health care systems will do well to focus on persons with diabetes as a high priority target group for tuberculosis screening.

Persons with uncontrolled diabetes are more prone to developing tuberculosis have a greater risk of dysglycaemia, and will need insulin more often. Many oral glucose-lowering drugs may not be tolerated by persons with anorexia and other gastro-intestinal complaints. Erratic appetite and absorption create a challenge in initiating and titrating doses of anti- diabetic therapy.

The dhat syndrome is a well documented culture-bound sex neurosis, endemic to South Asia. Research reveals that the emission of semen is equated with diabetes or the passage of sugar in the urine, by many persons.11 Diabetes is common morbid condition in persons with dhat syndrome, and dhat may be a contributory factor to diabetes fatigue syndrome.12

Endemicity associated with complications of therapy

Diabetes therapy can be associated with various complications. One such condition, due to inappropriate insulin technique, is termed as ‘insulin tattoo’. Hyperpigmentation of the skin is noted at the site of repeated insulin administration. This condition has been reported in western literature before but more recently also form Africa (personal observation: Dr. Silver Bahendeka, Uganda) and may be considered now endemic to African ethnicity.13

This article reviews certain aspects of diabetes etiopathology, clinical presentation, comorbidity and iatrogenic adverse events, that are more prevalent in certain parts of the world. Thus by using the term ‘endemic syndromes in diabetology’, the authors aim to draw attention to these important aspects of diabetes and to encourage documentation of similar, clinical patterns across the world.