Obesity has reached pandemic proportions globally and is now also affecting developing countries in the south Asian region. Though conventionally described as a non-communicable disease, in certain ways it can be transmitted from one individual to another. In this paper we describe the different ways in which obesity has been considered as a communicable disease. The role of gut microbiota in causing obesity, transfer of microbes causing changes in body composition, viral infections associated with human obesity and above all it being a socially contagious disease in view of rapid globalization, are few of the communicable attributes of obesity. This framework has also led to development of novel treatment strategies for managing this rapidly increasing pandemic.

The prevalence of obesity is increasing rapidly across the world, including several developing countries in the south Asian region. This has further increased following modernization of lifestyle resulting in limited physical activity and a huge calorie burden on the community. Though classically described as a non-communicable disease, it is often identified in clusters, affecting individuals who work or stay together.  By definition a disease is said to be communicable when it can be transmitted from one individual to another susceptible host, through a vector or an inanimate environment. Not only obesity has been considered as a socially contagious disease in context of rapidly increasing globalization but also has been technically demonstrated to be transmissible through several gut microbiota experiments from one organism to the other. Understanding obesity through this lens even has therapeutic implications especially while addressing multiple family members or a cohort of patients through obesity support groups. 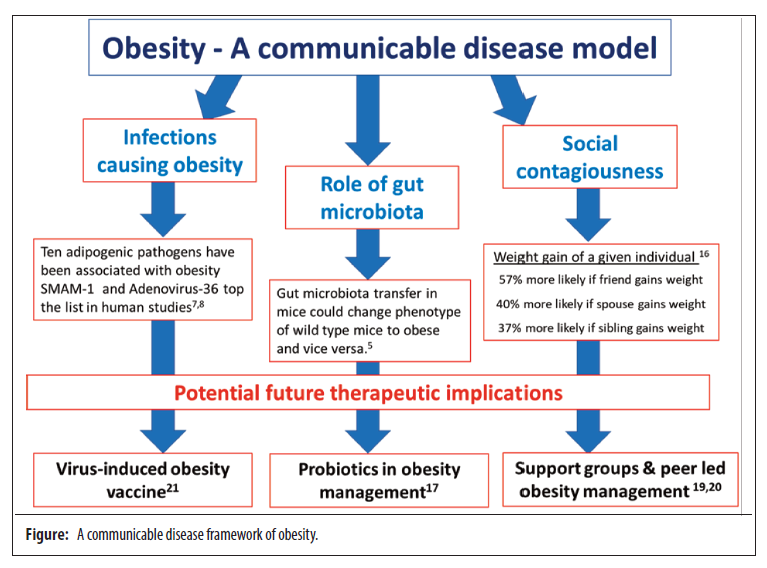 (Figure) In this paper we have detailed several aspects of obesity through the lens of a communicable disease and how this perspective could improvise its current understanding and management.

With an increasing life span of individuals with chronic infective disorders, there is an emerging interest in studying these communicable disorders in light of non-communicable diseases and vice a versa. Rather these now come under the framework of chronic diseases and principles of NCD management work better to address these infections. A classically described example of this is in people living with HIV infection.1 At times there is also a well described intersection of communicable and non-communicable diseases. Osteoporosis associated with chronic liver infections; metabolic syndrome with HIV infection are few examples that have been described in literature.

Certain non-communicable disorders have been shown to have an infective component in their aetiology like Paget’s disease – slow viral infections like paramyxoviridae, Type 1 diabetes - enteroviruses, Gall bladder cancer etc. However, certain disorders like obesity could be considered infective beyond just association with other infective disorders but through hard core evidence to demonstrate the ability of transferring the obese phenotype from one organism with obesity to another lean individual. This has been summarized in the following section.

The transfer of gut microbiota and changes in body size

Gut microbes have been the focus of research related to metabolic disorders over the last decade or so. Gut microbiota composition is determined by previous environmental exposure and further shaped by host genetics. It can have a variety of impact on different components of metabolic syndrome through several inflammatory pathways. The key pathways related to obesity include Interleukin–1beta which is obesogenic whereas interleukin-18 as a weight friendly molecule. Furthermore, in a recent paper by Henao-Mejia et al, it was demonstrated that microbiota transfer from mutant mice predisposed the wild type mice to develop components of metabolic syndrome, indicating that altered microbiota was a cause rather than consequence of this phenotype.4 Though several similar experiments have been performed in the past, these have been successful in the rodent models.5,6 It is however important to note that mice are coprophagic and hence spread of intestinal bacteria is likely more efficient in them during cohabitation than will be the case with humans.

So far ten adipogenic pathogens have been identified in different organisms that could lead to obesity. These include human and non-human viruses, scrapie agents, bacterial and gut microflora as has been discussed before. In a study by Dhurandhar et al, individuals having antibodies to SMAM-1 were found to have a significantly higher body mass index as compared to those who were negative for the antibody test. (35.3±1.5 kg/m2 vs 30.7±0.6 kg/m2, respectively; p<0.001).7 The obesogenic animal viruses include canine distemper virus, Rous-associated virus type 7, Borna disease virus, scrapie agent and

SMAM-1. All of these viruses except SMAM-1 affect the central nervous system whereas SMAM-1 and a few other adenoviruses(Ad-5,35 and 37) directly act on adipose tissue and help in differentiation of preadipocytes to mature adipocytes.8

In a study by Atkinson et al, who measured antibodies to Ad-36 in 502 individuals of varying body mass index from 3 cities in the United States including New York City, Madison, and Naples found Ad-36 antibodies in about 30% of individuals with obesity in contrast to only 11% of lean individuals.9

The emerging evidence in this area suggests that at least a part of this rapidly increasing pandemic could be related to obesity.10,11 This becomes even more relevant in the current times when the world is grappling with the COVID-19 pandemic.

Furthermore, bacteria like mycobacterium tuberculosis have been demonstrated to persist in adipocytes.12 Moreover, invasion of human fat cells by these infective organisms, has shown to worsen the existing chronic inflammatory mileu in individual with obesity and further predisposes to the cardiometabolic complications of obesity.13

Role of globalization in making obesity a socially contagious disease

Beyond evidence of physical transmissibility, obesity is also considered as a socially contagious disease as co-inhabitants tend to share eating habits and may lead to co-developing the obese phenotype. Moreover, with increasing globalization a term called ‘infectobesity’ has been introduced, which in addition to infectious causes of obesity also encompasses the widespread impact of changing social norms that promote weight gain. Though a global phenomenon, infectobesity impacts individuals with different ethnicity in a very disparate manner. The south Asian phenotype are more susceptible to a rapidly increasing calorie dense westernized lifestyle.14 Apart from dietary intake, exposure to common external stressors may result in a sustained hypothalamic pituitary axis dysregulation.15

In this study by Christakis et al, involving 12,067 people, who were assessed repeatedly between 1971 to 2003 as part of the Framingham heart study statistical models were used to study if weight gain in one person was associated with weight gain in his/her friends, siblings, spouse or neighbours. Interestingly it was found that an individuals chance of becoming obese increased by 57% if they had a friend who became obese in a given interval. Among pairs of siblings, if one sibling became obese, the chance that the other would become obese increased by 40%. If one spouse became obese, the likelihood that the other spouse would become obese increased by 37%. People of the same gender had a relatively greater influence on each other than those of the opposite sex.16

Despite obesity reaching pandemic proportions, therapeutics of obesity is still a relatively underdeveloped area. Though procedures like bariatric surgery have been on the rise they are unaffordable for a large majority of individuals living with obesity. Understanding obesity through the lens of an infective disorder provides newer avenues to manage this complex disease. While gut microbiota is still a novel field of research, emerging literature on the favourable impact of altering the gut microbiota composition on body weight is rapidly becoming available.17,18 Addressing the ‘infectobesity”’ model in light of rapid globalization emphasizes better impact of weight loss regimes when done as a group or addressed as a family or as a group.19,20 Development of a vaccine for virus induced obesity has been on the cards and an area of active research a few centers across the world.21

Thus to conclude obesity though classically described as a non-communicable disease, has several aspects that could be considered in the domain of a communicable disease. This framework not only provides a better understanding of the subject but also opens up novel treatment avenues for managing this rapidly increasing pandemic.