Objective: To assess the presence of psychiatric morbidity and associated socio-demographic factors among informal caregivers of children suffering from intellectual developmental disorders.

Method: The analytical cross-sectional study was conducted at the Neurology Department of a tertiary care hospital in Rawalpindi, Pakistan, from January 1, 2018, to December 31, 2019, and comprised informal caregiver of children diagnosed with intellectual developmental disorders presenting at the paediatric or neurology outpatient clinics of the hospital. Intellectual developmental disorder was diagnosed by consultant neurologists or psychiatrists or paediatricians on the basis of International Classification of Diseases-11 criteria. Psychiatric morbidity in the informal caregiver was assessed using the 12-item general health questionnaire. Data was analysed using SPSS 23, and binary logistic regression was applied to assess association.

Conclusion: Majority of informal caregivers of children with learning difficulties were found to have psychiatric morbidity.

Previously classified as disorders of mental retardation or learning disability, the set of these disorders have now been summarised under the umbrella of intellectual developmental disorders (IDDs) in the International Classification of Diseases version 11 (ICD-11).1 They can also exist as comorbid entity with various other neuropsychiatric disorders, like Attention deficit hyperactivity disorder (ADHD), autism, conduct disorder, cerebral palsy (CP) and epilepsy.2,3 Pharmacological or non-pharmacological options available only control the behavioural problems or associated physical or mental symptoms, but have no role in the definitive management of the underlying brain damage.3

Caregiving has been a difficult task, especially for patients with chronic conditions. Chronic diseases or progressive diseases pose a great challenge on the caregivers compared to the acute diseases. Special scales have been designed to quantify the burden of caregiving among various populations.4,5 Most studies revolve around the caregiving of old patients or critical patients with acute problems.6,7 Caregiving of a mentally handicapped child may be different in this regard.

Children with learning disabilities are catered to differently in different cultures. Even in the developed countries with good prenatal diagnostic facilities and more chances of uneventful labour, there is a steady rate of epidemiology of these disorders.8 Depending upon the degree of disability, these children need constant caregiving throughout their life.9 Primary caregiver, usually the mother, is the chief person involved in this task and she may be prone to psychological distress due to this burden. A recent study done on the mothers of children with IDD revealed that most mothers were depressed and were using negative coping strategies for overcoming their stress.10 Another study done in Kenya, a developing country, replicated these findings and revealed that mothers of IDD children are more at a risk for developing clinical depression compared to the mothers of children having normal intelligent quotient (IQ).11 A study done in Karachi revealed that 70% caregivers of IDD children were suffering from depression or anxiety.12

Various factors can be linked to the presence of psychiatric morbidity among the primary caregivers of IDD children. Some of them include caregiving burden, age of the caregiver as well as that of the patient, financial issues and the type and severity of learning disability.13,14

The prevalence of children with this problem is around 6% in Pakistan15 which is a huge number and may keep on increasing as antenatal facilities and awareness regarding screening during this time are still insufficient. Informal caregiver has the responsibility of other children as well. Besides, the caregiver has to perform other tasks in life in addition to the rearing of children. Sound mental health of the caregiver is necessary for the task of caregiving and for the other tasks of life as well.

The current study was planned to assess the presence of psychiatric morbidity and associated socio-demographic factors among primary caregivers of IDD children.

The analytical cross-sectional study was conducted at the Neurology Department of a tertiary care hospital in Rawalpindi, Pakistan, from January 1, 2018, to December 31, 2019. After approval from the institutional ethics review committee, the sample size was calculated using the World Health Organisation (WHO) calculator with population prevalence proportion of 70%.12 The sample was raised using non-probability consecutive sampling technique from among the informal caregivers of diagnosed IDD children presenting at the paediatric or neurology outpatient clinics of the hospital. Informal caregivers were basically family caregivers providing care to family members without any financial incentive. All IDD cases were screened and informal caregivers of only those children were enrolled who had been diagnosed by consultant neurologists, paediatricians or psychiatrists on the basis of ICD-11 criteria,1 which has defined the condition as a disorder characterised by significant limitations in intellectual functioning and adaptive behaviour, originating during the developmental period.1

Those excluded were informal caregivers who did not consent to participate, and those with a past or current history of any chronic physical or psychiatric illness or current history of substance use. Also excluded were pregnant caregivers, had age >60 years and those with patient admitted in ward for any acute reason. Those who could not read or fill the study questionnaire were also excluded.

After taking written informed consent from the participants, sociodemographic data was collected using a predesigned structured proforma, while the 12-item general health questionarre (GHQ-12) was used as the psychometric tool which is a valid and reliable instrument to assess psychiatric morbidity. Urdu translation already used in previous studies16,17 with good validity was used to screen the primary caregivers of children. The overall score range is 0-36, with a cut-off score of 3.

A clinician was present as they subjects filled up the two data-collection tools to answer any queries.

Comorbid epilepsy was diagnosed by consultant paediatricians or neurologists based upon clinical and electrophysiological findings. Family income was classified according to the World Bank’s definition of income groups or gross national income (GNI) per capita.18

Data was analysed using SPSS 23. Frequencies and percentages for gender of both the patients and the caregivers as well as for patients with and without psychiatric morbidity were calculated. Chi-square and binary logistic regression analysis were performed to look for the association of age, gender of caregiver, gender of patient, presence of more than one chronic patient in the family, comorbid epilepsy in the child and family income with the presence of psychiatric morbidity among the primary caregivers. P<0.05 was considered statistically significant. 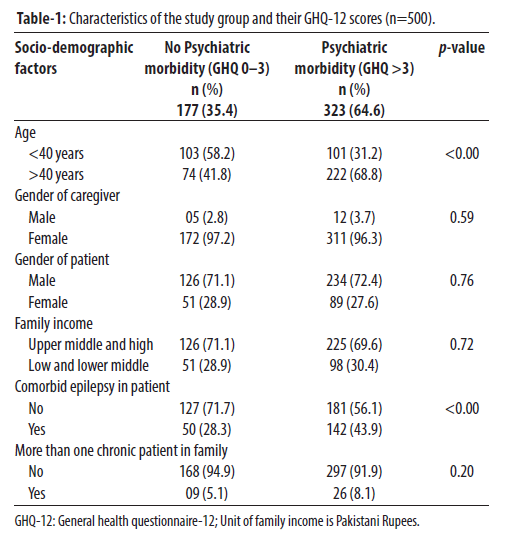 Increasing age of the caregiver and the presence of epilepsy as a comorbid in the patient had a relationship with psychiatric morbidity, and binary logistic regression was significant (Table 2). 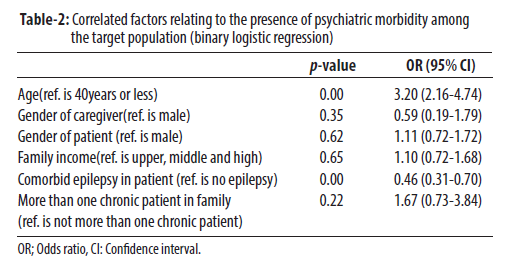 Child neurology and child psychiatry are almost non-existent specialties in Pakistan as no more than half-a-dozen specialists exist in the whole country for these specialties. On the other hand, the burden of the patients needing care related to these specialties is huge.19 General paediatricians or adult psychiatrists or neurologists are usually handling these patients without adequate training to handle them. This deficiency not only affects patient-care, but also increases the burden on parents and caregivers. Learning developmental disorders, which were previously called mental retardation disorders in ICD-10, have been stigmatised for centuries now. These patients need some support throughout their life depending upon the nature and extent of the disability.3 This fact exposes their caregivers to a lot of burden, especially in case of the primary caregivers. By virtue of this caregiving burden, they have increased chances of having physical and psychological problems. The current study aimed at assessing the presence of psychiatric morbidity among the primary caregivers of IDD children.

More than 60% of the sample showed the presence of psychiatric morbidity. This finding is not uncommon and other studies have also shown similar results.10-12 This strengthens the fact that caregiving burden of an IDD child can lead to psychological problems among caregivers. Once caregivers have mental health problems, it can lead to poor QOL of the caregivers as well as poor caregiving ability.

There was a clear female predominance among primary caregivers in the current study. It is in accordance with the existing literature.9,12 The few males that were primary caregivers in the study were either divorced or widowed. Due to very few number of male primary caregivers, the analysis could not reveal any significant results, but it should be kept in mind that women almost have double the chance of getting neurotic illness compared to the males. As such, when women have to take the responsibility of caregiving for a IDD child, their own mental health should be screened regularly.

Increasing age of the caregiver was found significantly related with the presence of psychiatric morbidity, which is in accordance with literature.14 A few subjects in the current study were maternal or paternal grandmothers due to either the death or the non-availability of the mother.

Presence of comorbid epilepsy among the IDD children was also a strong predictor of psychiatric morbidity among their primary caregivers. Previous studies have also reported similar findings.20 Epilepsy also has poor prognosis among IDD children which further increases the burden on the person taking care of such a child.

The limitations of the current study include the use of a subjective questionnaire which is sensitive to over- and under-reporting by the subjects. Ideally, screened cases should have been evaluated clinically by a mental health professional or by using a detailed interview. Caregiving burden was also not measured among the participants ad it could have a strong impact on psychiatric parameters. Grade and type of learning developmental disorders was also not part of the study design. Caregiving burden and stress of the caregiver may be very different in mild patients compared to severe or profoundly handicapped patients. Addressing these limitations in future studies can generate more generalisable results.

Majority of the informal caregivers of IDD children were found to have psychiatric morbidity. Providing care to IDD children is a stressful task and leaves the caregiver vulnerable to mental health issues. Special attention should be paid to the caregivers with advanced age and those whose patient is suffering from epilepsy in addition to IDD.