Objective: To determine the nutritional knowledge and clinical practices of physicians regarding nutrition in cirrhosis patients.

Results: Of the 92 participants, 52(56.5%) were males, while the overall mean age was 28.3±4years and mean years in service 3.7±3 years. The mean score obtained was 5.8±2.1. Of the total, 33(35.9%) physicians had received formal nutritional training, 27(29.3%) were giving regular nutritional counselling and 48(52.2%) wrongly believed in the implementation of restricted diets. A large number of participants incorrectly considered salt 61(66.3%), water 49(53.2%) and lipids/oils 24(26%) to be avoided in ascites. Mean knowledge scores varied significantly for physicians dealing with cirrhosis patients on a daily basis (p<0.001) and those who had received formal training (p=0.003).

Conclusion: The nutritional knowledge of physicians regarding cirrhosis was found to be sub-optimal.

Adequate nutritional care is one of the key factors for an active and healthy life. Despite its central role in overall development, malnutrition and its implications on the individual as well as society have always been neglected. Approximately 11 million deaths per annum have been attributed to poor dietary habits and therefore, the need for improved and sustained dietary counselling with prompt implementation is of paramount importance.1

Deterioration in nutritional status of cirrhosis patients is often overlooked by healthcare providers.3 Many lacunae have been identified for the lack of dietary counselling in patients, including paucity of data,4 lack of training in graduate and post-graduate curricula,5 inadequate knowledge of the treating physician,6,7 non-availability of a dietician and multi-disciplinary team (MDT) approach8 and a general approach of the medical registrars considering nutritional assessment and training to be of low priority since they are rarely tested.9

Nutritional knowledge, including assessment, counselling, implementation and ensuring compliance, despite being of paramount importance, has notably been ineffective and insufficient for many years and has been reported to be the weak area for many physicians.10 The current study was planned to highlight the lacunae regarding the knowledge of doctors, and their practices regarding counselling cirrhosis patients.

This multi-centre cross-sectional knowledge, attitude and practice (KAP) study was conducted at Pak Emirates Military Hospital, Rawalpindi, Bahria Town International Hospital, Rawalpindi, and District Headquarter (DHQ) Hospital, Mandi Bahauddin, Pakistan, from January to March 2020. After approval from institutional ethics review committee and the concerned heads of the departments, the sample size was calculated with margin of error 10%, confidence interval (CI) 95% and percentage of satisfactory or good practice scores of doctors 39.5%.11

Those included were registered medical practitioners (RMPs) working as house officers, medical officers, registrars and senior registrars in the medical and allied wards. Newly-inducted house officers with experience of <6 months, doctors on administrative positions and those involved solely in research work were excluded.

Data was gathered after taking written informed consent from all the participants. The subjects were interviewed using a structured questionnaire developed in the light of literature.1,2 The questionnaire consisted of two sections; the first contained questions regarding socio-demographic data, including gender, age and years in service, while the second section comprised questions related to the regular dealing and necessary training/information regarding nutrition in the cirrhosis patients, and knowledge related to the nutritional needs of cirrhosis patients.

The questionnaire was distributed among the doctors working in the wards, out-patient department (OPD) and the Accident and Emergency (A&E) department. The filled-up questionnaires were re-collected at the end of each shift. The scores were calculated by giving a score of 1 to correct responses and 0 to the incorrect ones. 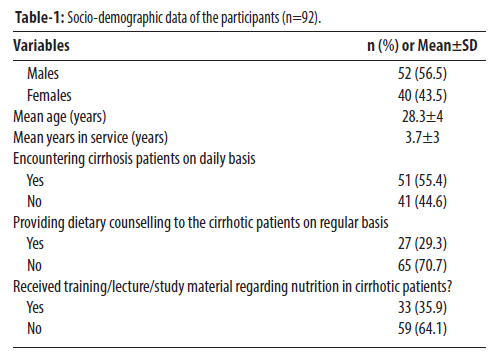 Overall, 51(55.4) participants correctly identified the focal person(s) responsible for dietary counselling of patients; 75(81.5%) correctly identified the importance of nutritional assessment upon every visit; 60(65.2) accurately pointed out BMI as being an ineffective tool for nutritional assessment; 18(19.6%) were able to answer correctly the number of calories and 16(17.4%) answered correctly the number of meals per 24 hours in cirrhosis patients. Majority of the participants 48(52.2%) wrongly believed in the implementation of restricted diets; 70(76.1%) correctly answered the question regarding the need for micronutrients; and 71(77.2%) accurately answered the need for physical activity in these patients.In the open-ended question, 37(40.2%) doctors answered incorrectly or were not able to answer regarding the anthropometric measurements used for nutritional assessment in cirrhosis patients; 34(37%) jotted down a single measurement; and 2(2.2%) were able to write down 4 measurements accurately. Similarly, 46(50%) participants were not able to enumerate the micronutrients required as a balanced diet in a cirrhosis patient; 20(21.7%) were able to enlist a single micronutrient; and 18(19.6%) enlisted 2.Further, 54(58.7) subjects wrongly considered restricting salt, 37(40.2) animal proteins, 35(38%) lipids/oils and 26(28.3%) spices and seasoning in uncomplicated cirrhosis patients, while 7(7.6)% were able to answer the question correctly.

Similar was the case with doctors who incorrectly considered salt 61(66.3%), water 49(53.2%) and lipids/oils 24(26%) as things to be avoided in ascites, while 5(5.4%) answered the question correctly. In cases of recurrent encephalopathy with sarcopenia, 45(49%) doctors answered correctly, restricting only animal proteins (Table 2).

The knowledge scores were significant for physicians dealing with cirrhosis patients on a daily basis (p<0.001) and those who received formal training (p=0.003). Gender (p=0.89), number of service years (p=0.07) and physicians providing counselling on a regular basis (p=0.31) did not impact the scores significantly (Table 3). 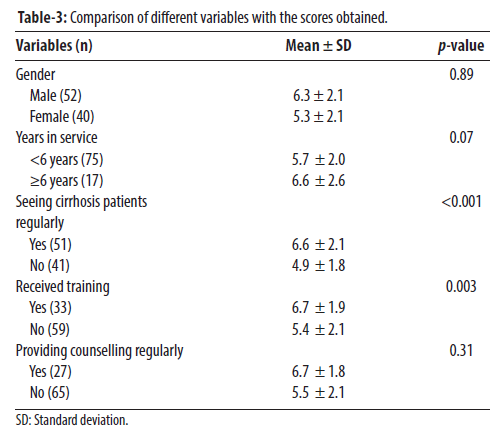 Dedicated nutritional counselling empowers patients and caregivers to take due care. Studies have reported the relevance of nutritional training and education in gastrointestinal diseases along with the lack of proper clinical application and poor integration of knowledge into the curricula and daily practice.10,12,13

The current study had a predominance of younger physicians compared to earlier studies.8 Younger physicians scored lower and were less aware than their older colleagues in the study, which is in contrast to a similar study in the Asian Pacific region.8 However, others found no such difference.14-17

A considerably low percentage (29.3%) of the physicians reported counselling their patients regarding nutrition on a daily basis in the current study, which was in line with a study at the University of California which reported 22% physicians imparting nutritional knowledge.13 However, other studies done in American and European regions showed a higher inclination of the treating physicians towards nutritional counselling compared to Asian and African countries.19,20

A study showed that referral to dietician was as high as 64% in the developed countries20 and nutrition was considered to be the sole domain of dieticians only, although MDT is the ideal approach21 which, again, is limited by financial and work-force provision. A good percentage of physicians (94%) agreed to their paramount role in providing nutritional counselling to the patients, but an equally large number of physicians (84%) had not been formally trained.6 The European Association for the Study of the Liver (EASL) guidelines for nutrition in cirrhosis patients has emphasised the role of all healthcare members looking after the patient with regular nutritional assessments on every visit.1

The current study showed that only 6.5% participants were able to give more than two correct responses to the open-ended question regarding micronutrients, which is in contrast to a similar study from the United States that showed a percentage of 34.1% regarding knowledge of micronutrients.13 EASL recommends diet supplementation with vitamin D3, calcium, multivitamins, zinc and 5gm of salt in patients with ascites.1

There was a significant relation between the knowledge scores and the exposure of the physicians with cirrhosis patients. The finding is in accordance with one published study.23 This highlights the need for well-structured nutritional training with frequent assessments and appraisals.

Approximately 60% of the physicians answered the question regarding caloric intake in cirrhosis patients incorrectly, which was in contrast to a study done in Ghana.3 Recent guidelines recommend a daily caloric intake of ≥35kcal/day divided in to ≥5 meals over the span of the whole day. Contrary to previous beliefs, no restriction in diet is required for compensated cirrhosis and only animal protein is avoided in patients with recurrent porto-systemic encephalopathy (PSE) though vegetable proteins, diary and eggs are allowed. Also, 1.2-1.5g/kg body weight of protein with 5gm of sodium chloride is recommended for all cirrhosis patients irrespective of the disease severity.1

The strength of the current study is its multi-centre nature although the results cannot be generalised as the training modalities, teaching practices, patients’ inflow and segregation of the patients into separate specialised wards might play a role in the differences in clinical practices. Also, a vast majority of the patients visit private clinics, which were not included in the study.

In terms of limitations, doctors working in gastrointestinal (GI) department or those who have worked previously at GI wards have a better understanding of the nutritional needs of cirrhosis patients which might have affected the current findings. Further, the cross-sectional study could not establish a causal association between nutritional education scores and patients’ misconceptions.

The nutritional knowledge of physicians regarding cirrhosis was found to be sub-optimal, clinical practices adopted were not evidence-based, and clinical assessment with nutritional counselling lacked vigour and consistency.

9.      Quigley EMM. Editorial: Nutrition in gastroenterology: more relevant than ever yet largely ignored in our education and training. Curr Opin Gastroenterol 2020; 36: 99-100.