Germ cell tumours (GCT) are the most common malignancy in men between the ages of 15 and 35 years. Pure choriocarcinoma is a very rare entity of non- seminomatous germ cell tumour and comprises only 1% -3% of all the testicular tumours. Choriocarcinoma syndrome is a clinical condition in which haemorrhage occurs from the metastatic sites with elevated level of the Beta-Human Chorionic gonadotropin (Beta –HCG). A 15-year-old adolescent boy presented in with left sided testicular swelling along with dark coloured cutaneous lesions of the scalp, chest and chin for the last one month. He underwent left sided orchiectomy, and the histopathology report showed Pure Choriocarcinoma. Unfortunately, he died after the beginning of chemotherapy due to alveolar haemorrhage.

A 15-year-old adolescent boy presented to our clinic on December 17, 2019 in Shaukat Khanum Memorial Cancer Hospital & Research centre, Lahore, with the complaints of left sided testicular swelling and fever for four weeks along with cutaneous swellings on sternum and lower chin for the last one week. On examination, there were multiple cutaneous swellings of approximately 0.5 to 1.5 cm in size on his scalp, chin and sternum. He also had an enlarged, firm left testicular mass which measured approximately 7x6.5x6 cm in size with bilateral inguinal lymphadenopathy. His laboratory tests report showed Alpha Fetoprotein (AFP) of 2552 IU/ml and Free Beta HCG of 2532 ng/ml. 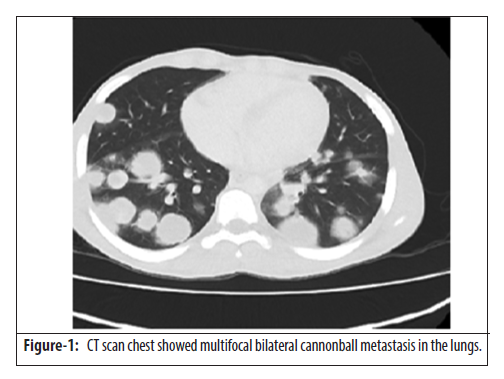 He underwent left inguinal orchiectomy with inguinal lymph node biopsy on December 24, 2019. After 24 hours of operation, the patient developed respiratory distress and per rectal bleeding. Initially, he was managed conservatively with supportive care and then in the multidisciplinary team meeting of our hospital it was decided to start BEP (Bleomycin, Etoposide, and Cisplatin) conventional chemotherapy of GCT in view of huge disease burden and raised AFP. After starting chemotherapy, his clinical condition further aggravated and his oxygen requirement increased. On the fourth day of chemotherapy, he developed left arm weakness; Magnetic Resonance Imaging (MRI) of the brain showed multiple hyper dense lesions in the frontal, temporal and parietal lobes (Figure-2). 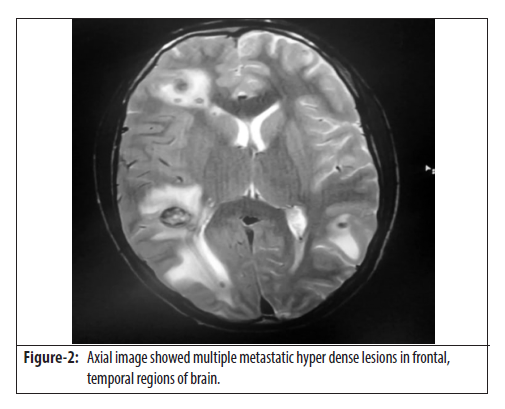 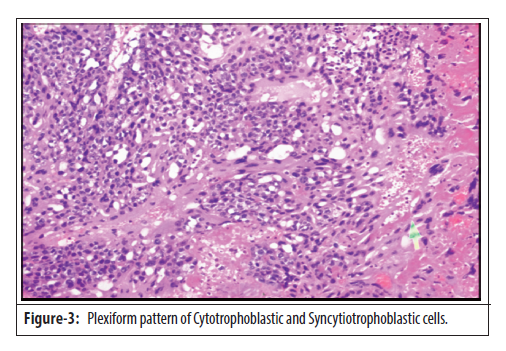 On the fifth day of chemotherapy, his clinical condition further deteriorated due to respiratory distress along with profuse bleeding from cutaneous lesions. He was shifted to the Intensive Care Unit (ICU); on intubation fresh blood drained out through the endotracheal tube. The patient went into cardiac arrest and, unfortunately, died due to pulmonary haemorrhage.  Histopathology report came after his death which showed non-seminomatous germ cell tumour almost exclusively choriocarcinoma with lymphovascular invasion, 70 mm, pT2.

Choricarcinoma syndrome was defined for the first time by Logothetis et al3 as a characteristic clinical presentation of haemorrhage from metastatic germ cell tumour with more choriocarcinoma elements and markedly raised level of beta-HCG. Our patient also presented with high value of beta-HCG with advanced disease.

Haemorrhage in choriocarcinoma occurs in any organ, such as lungs, intestine, liver, kidney, etc. due to invasion of choriocarcinoma cells in the blood vessels of these organs and present with life-threatening haemorrhages. Lung metastasis leads to diffuse alveolar haemorrhage, which was the cause of death in our patient.4

Choriocarcinoma rarely metastasises to skin and in literature only 16 cases have been reported with cutaneous manifestation of choriocarcinoma. About 5% of patients of choriocarcinoma had gastrointestinal involvement either due to direct spread from adjacent retroperitoneal lymph nodes or haematogenous spread.5

Testicular choriocarcinoma with brain metastasis has been reported in 17 cases in literature and carried a poor prognosis because it is complicated due to intracerebral haemorrhage and herniation.6 In our patient, there were multiple supratentorial and infratentorial metastatic lesions in the brain which were detected 24 hours before his death.

In clinical setting, choriocarcinoma syndrome presents in two ways: in an advanced stage or acutely due to development of tumour lysis syndrome on the second or third day of starting chemotherapy7 and very rarely presents before the start of the treatment. In our patient, both the components were present and his clinical condition further deteriorated after starting chemotherapy.

To overcome the development of choriocarcinoma syndrome, mechanical ventilation support before starting chemotherapy is needed for the treatment of acute respiratory distress syndrome (ARDS) as it reduces mortality. Modified chemotherapy such as etoposide and cisplatin for two days followed by full dose BEP chemotherapy on day 11 based on Massard et al.’s findings7 proved that mortality reduced from 66.7% to 20% after modified BEP treatment. However, recovery from ARDS depends on multiple factors, such as good supportive care like mechanical ventilation and preventive use of Granulocyte monocyte colony stimulating factor (G-CSF).

In our patient, the cause of death was alveolar haemorrhage, which resulted in ARDS and cardiac arrest. Thus, goals of treatment should be individualised depending on the extent of the tumour, for instance if lung metastasis is present chemotherapy without Bleomycin should be a wise decision.8 Despite all of the above treatment, in literature the prognosis of choriocarcinoma is always fatal.

Choriocarcinoma syndrome is an extremely rare entity and when patient presents with similar symptoms, the prognosis is usually dismal.