Primary breast sarcoma (PBS) is a rare group of non-epithelial tumours arising from connective tissue of the breast. We report the case of a 55-year-old female who presented with rapidly increasing mass in the left breast. The mammogram showed a large high density mass occupying the whole of the left breast, while Doppler ultrasound showed a mass of increased vascularity. Diagnosis was confirmed by histopathology of ultrasound-guided biopsy. Although there are no pathognomonic imaging features of PBS, presence of a solitary large mass showing rapid growth, with circumscribed or indistinct margins without axillary lymph node involvement should raise the suspicion of sarcoma and prompt biopsy to ensure early diagnosis and treatment; particularly considering the aggressive nature of these sarcomas.

Breast sarcomas (BS) are among the rare mesenchymal tumours that originate from the connective tissue of the breast.1 They account for less than one percent of all breast malignancies and less than five percent of all soft tissue sarcomas.1,2 BS clinically presents as a rapidly growing mass, without skin thickening, nipple discharge or axillary lymphadenopathy.3 Radiological modalities, such as mammography, ultrasound, Computed Tomography (CT) and Magnetic Resonance Imaging (MRI) are used to evaluate primary breast sarcoma (PBS). Diagnosis is confirmed on biopsy findings. We present the case of PBS in a 55-year-old lady who presented with rapidly enlarging left breast mass and underwent various diagnostic imaging procedures. Informed consent of the patient has been taken for the publication of the report.

A 55-year-old peri-menopausal female presented at the Breast Clinic at Shaukat Khanum Memorial Cancer Hospital and Research Centre, Lahore on May 15, 2019, with left breast lump for two months. It was rapidly increasing in size and was not associated with nipple discharge or retraction. On clinical examination, there was a large mass involving the whole of the left breast that was not attached to the underlying muscle. Prominent blood vessels were noted in overlying skin. 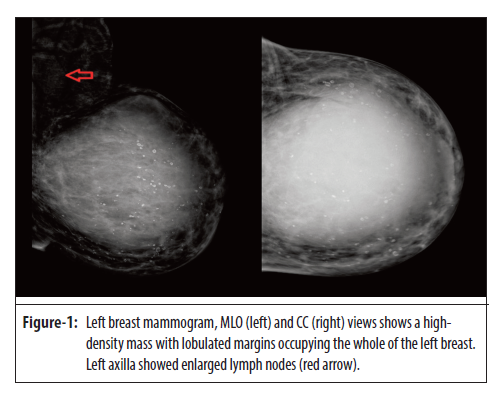 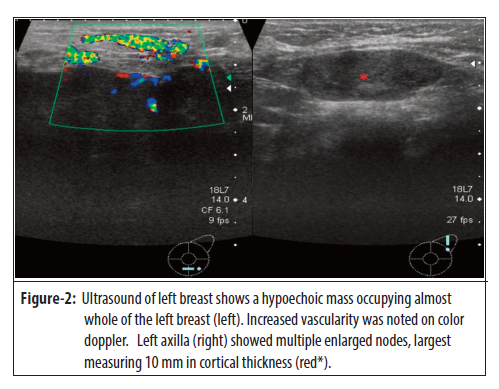 Contrast enhanced CT examination through the chest, abdomen and pelvis was performed for metastatic workup. It showed a large enhancing mass occupying almost the whole of the left breast, measuring up to 10cm in maximum dimension, involving the overlying skin as well as invading into the underlying pectoralis major muscle.  Associated left axillary lymph nodes were also enlarged, measuring up to 1.5cm in short axis. There were no pulmonary, hepatic or osseous metastasis (Figure 3). 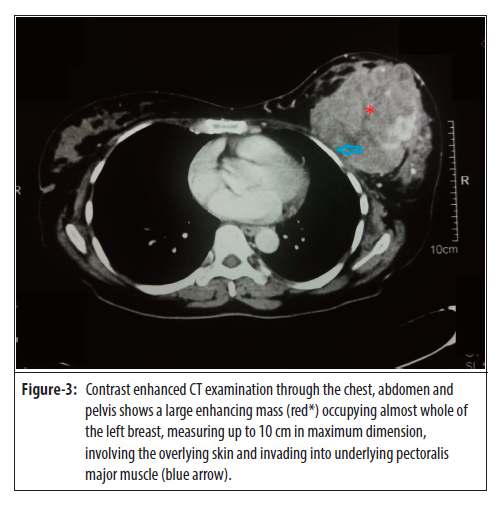 As per the multidisciplinary team’s (MDT) recommendation, the patient underwent left modified radical mastectomy (MRM). Histopathology of the mastectomy specimen showed undifferentiated spindle cells sarcoma with all margins free of tumour. The differential diagnosis were primary breast sarcoma versus sarcomatous overgrowth in malignant phyllodes. As no background features of phyllodes were identified on extensive sampling, the former diagnosis was favoured. Immunohistochemical stains were negative for Desmin, S100, CD34 and CK. Results of axillary nodal dissection showed 15 reactive lymph nodes, with no evidence of metastasis.

After MRM, the MDT decided to start six cycles of systemic chemotherapy (Adriamycin/ifosfamide) followed by radiotherapy. After three cycles of chemotherapy, the patient developed hypokalaemia and acute kidney injury due to post- chemo persistent vomiting and was admitted in the ICU for three weeks. Chemotherapy was stopped and radiation therapy was done for left chest wall (50 Gy/25 fractions) with 10 Gy boost. Follow-up CT scan has not been done yet.

BS arises from interlobular mesenchymal tissue.1 It presents as palpable, mobile rapidly growing mass without skin thickening, nipple discharge or axillary lymphadenopathy. It can form masses as large as 30 cm in diameter, with mean diameter of 3 cm.3 BS can be categorised as: primary (de novo development) or secondary (therapy related development).4 PBS has no known aetiology; however, the main risk factor for secondary breast sarcomas (SBS) is previous radiation therapy following breast-conservation surgery for breast cancer or non-Hodgkin's lymphoma and genetic syndromes, such as neurofibromatosis type 1 and Li-Fraumeni syndrome.3,5 PBS occurs over a wide age range, but mostly in the fifth or sixth decade of life.3

Imaging features of PBS are different from those typically seen in commoner epithelial neoplasms. Taletha B et al also described single high density oval-shaped mass with indistinct margins as most common mammographic finding in their study.6 Our case also had similar features of large oval mass with indistinct margins. Pleomorphic calcifications commonly seen in invasive ductal carcinomas are not seen in PBS. PBS have rapid growth pattern and have pushing border, which makes their margins circumscribed on imaging; however, there is histological evidence of invasion. This explains the aforementioned imaging findings of PBS which are in contrast to the feature of spiculated or irregular margins associated with invasive epithelial neoplasms. However, angiosarcoma may grow as ill-defined haemorrhagic mass and show architectural distortion on mammogram.6 Sonographic evaluation of our patient showed a large hypoechoic mass with indistinct margins occupying almost all quadrants with increased vascularity seen on colour Doppler. These are similar to the sonographic features described by Taletha B et al and Surov et al in their studies.6,7

CT scan was performed in our case as part of the metastatic workup for staging, which showed local invasion into underlying pectoralis major muscle and absence of metastasis. Similarly, 18 F-FDG PET/CT shows intense metabolic activity in BS and it is used for base line staging as well as in post-treatment restaging.8

Differential diagnosis of PBS includes sarcomatoid carcinoma, carcinosarcoma, fibromatosis, nodular fasciitis and fibrous histiocytoma.9 Differentiation from metaplastic carcinoma is important for treatment as well as prognosis.6 MRI study was not done in our case. There are a handful of studies that have described MR features of PBS. MRI may aid in distinguishing PBS from phyllodes tumours. Tan H et al have described that both tumours appear as lobulated masses with smooth margins and cystic areas on MRI; however, they noted that internal septations and hyperintense slit-like fluid-filled spaces described on T2-weighted sequences seen in phyllodes tumour were not seen in BS.6,10

Diagnosis of PBS is based on histopathology. Staging system for PBS is based on American Joint Committee on Cancer (AJCC) 7 for soft tissue sarcomas (STS), which takes into consideration the histological grade (G), tumour size (T), regional lymph node status (N) and presence or absence of distant metastasis (M).4

Management of PBS should involve a MDT that includes a radiologist, pathologists, surgeons and medical and radiation oncologists. Aggressive local therapy with mastectomy is recommended. Use of adjuvant radiotherapy is also advocated.1

Early diagnosis of PBS is essential. Because of non-specific imaging features, biopsy is crucial to make a definitive diagnosis. The presence of rapidly growing mass with indistinct or circumscribed margins with the absence of spiculated margins and grouped microcalcifications should alert the radiologist to consider the possibility of BS in the differential diagnosis and perform a biopsy. Imaging has a role in staging as well as in follow-up of these patients.

Disclaimer: This case report has not been previously presented or published elsewhere.