We aimed to detect typhoid carriers by performing duodenal fluid culture in patients in a tertiary care hospital in Pakistan. A cross-sectional study was conducted during 2017 at the Aga Khan University Hospital, Karachi. Patients who underwent upper gastrointestinal endoscopy were included. Participants were interviewed, and duodenal fluid samples were taken for culture to detect Salmonella typhi (S. typhi) and paratyphi. A polymerase chain reaction on 100 randomly selected sub-samples was also conducted. A total of 477 participants were enrolled. The mean age was 42.4±15.5 years. History of typhoid fever was present in 73 (15.3%) participants. Out of the 477 duodenal fluid cultures tested for various micro-organisms, 250 (52.4%) were positive. Neither S. typhi nor paratyphi were isolated. S. typhi was also not detected by PCR. To better detect S. typhi carriage in general population, future studies should target people with gall bladder diseases and screen them using culture and PCR based methods.

Globally the estimated incidence of typhoid fever ranges between 12 to 27 million and mortality ranges from 129,000 to 223,000 deaths each year. Typhoid fever has a faeco-oral mode of transmission and is, hence, common in regions with poor water supply and sanitation, particularly among the young population. The case-fatality rate of typhoid fever is estimated to be 1% in those who receive appropriate antibiotics compared to >10% in those who receive inappropriate treatment.1

In endemic countries, ~2%-5% of individuals with acute typhoid illness become chronic carriers and excrete Salmonella typhi (S. typhi) in their stool and urine without any symptoms. Carrier rates range from 2%-10% depending upon the type of population, sample analysed, and testing method used.2 Identification of chronic carriers is difficult, as ~25% of carriers do not recall having acute infection. Carriers can be detected either by isolating an organism in the stool, bile/duodenal fluid aspirate, urine, or gallbladder tissue on culture, or through serological methods as well as by molecular techniques (PCR amplification). Single stool culture has a low sensitivity (30-35%) and the need for sequential sampling makes its application logistically difficult.3 Duodenal tube aspiration or string test has better sensitivity (>50%) but is again logistically difficult.4 The risk of becoming a chronic carrier following an acute infection increases with age, is greater for women and is associated with gallstones and cholecystitis.2

Despite the high incidence of typhoid, the prevalence and epidemiological risk factors for becoming a chronic carrier have not yet been widely explored. Studies that were conducted on typhoid carriers had limitations, such as epidemiological rigor, inefficient diagnostic methods, or small sample size and have been performed on a selected population—predominantly food handlers and people with biliary diseases.5 At present, typhoid fever is one of the leading public health problems due to the emergence of resistant S. typhi strains.6 With the recent advances in the development of novel vaccines and human being the only reservoir for S. typhi, regional eradication of typhoid fever should be promising. Yet, spread of pathogen by chronic carriers obscures the elimination of typhoid fever. Thus, it is imperative to identify this challenging population prospectively. Here, we aimed to detect salmonella carriers by duodenal fluid culture among the Pakistani population.

We conducted a cross-sectional study between January-August 2017 at Aga Khan University Hospital (AKUH) in Karachi, Pakistan. All individuals ≥1 year of age, who underwent upper gastrointestinal (GI) endoscopy, were included. Those who had a history of cholecystectomy or did not consent were excluded. Typhoid carrier was defined as an individual whose duodenal fluid, obtained during upper GI endoscopy, was positive for S. typhi or S. paratyphi on culture. Information on history of typhoid fever and its treatment, socioeconomic status, and source of drinking water was collected from all subjects. Safe water was defined as the use of boiled or bottled (filtered) water for drinking. All other sources of water were deemed unsafe. A confirmed case of typhoid fever was defined as an individual whose blood culture showed growth of S. typhi or S. paratyphi at the time of past illness. Eligible participants were interviewed after taking informed written consent from participants/legal guardian. Assent was obtained for children age ≥7 years. Duodenal fluid samples were collected prospectively. Prospectively, ~2-10 ml of duodenal fluid was collected in labelled mucus traps through endoscopy. Normal saline flush was used in patients in whom it was difficult to collect the adequate amount of duodenal fluid.  The samples were then transferred to the hospital’s research laboratory to perform the culture. Polymerase chain reaction (PCR) was also performed on 100 randomly selected sub-samples of archived duodenal fluid specimens which were stored at -80°C. Ethical approval was taken from the Ethical Review Committee of AKUH (4526-Ped-ERC-16). All participants’ related information was kept confidential. Statistical analysis was carried out using standard statistical software. For socioeconomic status, factor analysis was performed for constructing a wealth index. The crowding index was reported as ‘not crowded’ if there were ≤2 persons/room and considered as ‘crowded’ if there were >2 persons/room. For visualising the study participants' geographical location, GIS mapping was done using Landsat satellite. Patients residing in the regions outside Karachi were identified and categorised according to the city. However, participants residing in Karachi were mapped according to their residential addresses. 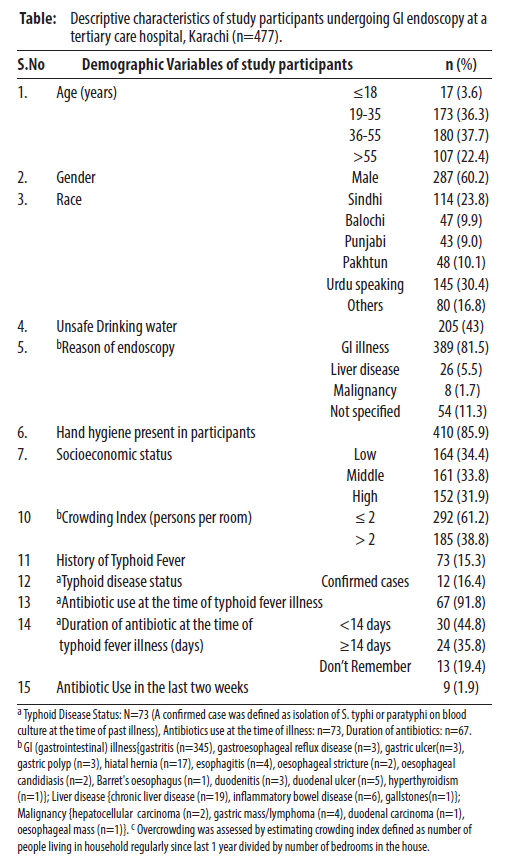 On the GIS map, our study participants were widely dispersed, representing around 356 (74.5%) from Sindh (54% from Karachi) (Figure). 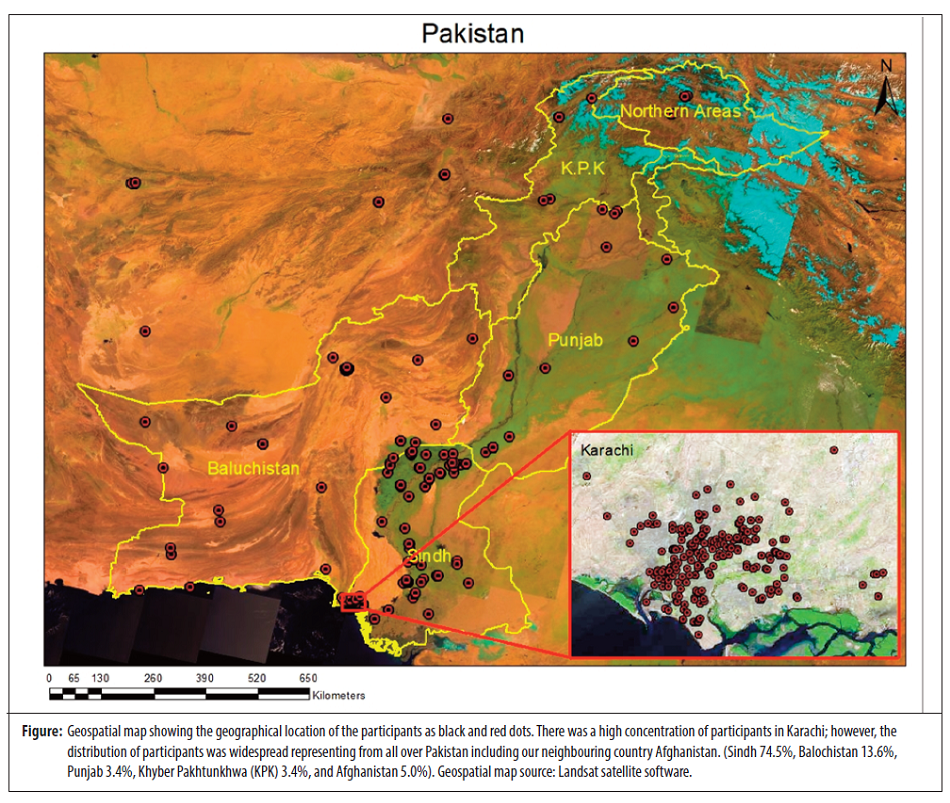 Controlling typhoid fever is challenging for many developing countries due to poor health care facilities and the interdependent nature of WASH (water, sanitation and hygiene) factors. This issue is further compounded by the presence of silent typhoid carriers. In order to identify chronic S. typhi carriers, screening through anti-Vi serology by ELISA (Enzyme-Linked Immunosorbent Assay) is recommended before culture.7 However, serological techniques are only useful when the titres are interpreted with regards to the background antibody levels in the local population;8 something which is not possible in developing countries. Hence, we studied culture and PCR techniques on duodenal fluid collected from patients during routine upper GI endoscopy.

In our study, Escherichia coli (E. coli) and Pseudomonas spp. were the most frequently isolated bacteria; this is consistent with past literature.9 This observation may suggest that most of the bacteria in bile originate from the intestinal tract. The non-isolation of S. typhi or S. paratyphi in our study may be attributed to our selected study population. We might have had a better yield in detecting S. typhi in the duodenal fluid if we had included patients with gall bladder diseases because of the role of Salmonella carriage in the pathophysiology of cholangiocarcinoma and cholelethiasis.5,10,11 In addition, it might be because the method used to collect bile from duodenal fluid is not ideal. We suspect that collecting bile and gallbladder tissue directly by more invasive techniques may yield better detection rates. Robert H. G. et al used string capsule for isolating S. typhi from patients with acute typhoid fever. Other methods include direct puncture of gallbladder, through endoscopic retrograde cholangiography or during cholecystectomy. Dongol et al found 24 out of 1,377 (1.7%) S. typhi carriers in bile from cholecystectomy patients in Nepal.12 Similarly, Vaishnavi C. et al found 21 out of 445 (4.7%) S. typhi from all bile samples.13

Furthermore, reports from past studies have shown that isolating Salmonella from culture is difficult as compared to molecular (PCR) based methods. Lucilia L. et al analysed the presence of S. typhi in gallbladder obtained from 99 adult corpses by culture and PCR. They reported 10 out of 99 (10.1%) S.typhi carriers. However, they observed that only one sample was positive on culture while nine samples were positive by PCR and confirmed by DNA sequencing. However, we failed to detect typhoid carriers by PCR on 100 randomly selected duodenal fluid specimens. This could be because we tested only limited number of samples.

Our study design was the major limitation and it was difficult to overcome given the diagnostic concerns of identification of typhoid carrier status at the outset. Literature shows that the sensitivity of salmonella detection from duodenal fluid samples is ~50% which is inconsistent with our study; therefore, further studies are needed to investigate this discrepancy by studying patients with gall bladder diseases.

Even though we did not identify salmonella carriage on duodenal fluid culture and PCR in our study, we still assume that there is a high prevalence of typhoid carriers considering the burden of typhoid fever in Pakistan. We understand that UGI endoscopy is not feasible for identification of typhoid carrier status at a public health level and the yield is low. We recommend development of serological tests that can identify salmonella carriage and have the ability to distinguish between acute illness from chronic carriage.

Acknowledgement: We are grateful to Professor Dr Anita K. M. Zaidi for providing funding support through a research grant from the Fogarty International Centre at the National Institute of Health. Combined and individual acknowledgements are owed to our co-workers, data collectors and data entry operators. We are thankful to the gastroenterologists, endoscopy staff members, technicians and nurses for collecting duodenal fluid samples. We are extremely thankful to Mrs Shahida Qureshi, Mrs Aneeta Hotwani and Mr Furqan Kabir for providing support in performing culture and PCR tests. We acknowledge Dr Abdul Momin Kazi and Mr Ayub Khan for helping us in GIS mapping of study participants and would like to acknowledge Dr Hadi Usmani and Dr Abdullah B. Naveed for helping us in the manuscript writing.

Disclaimer: This study was part of a Master's Thesis Project.

Funding disclosure: This research was funded by a research training grant from the Fogarty International Centre at the National Institute of Health (1D43 TW007585-01).