Papillary thyroid carcinoma (PTC) is the most common type of all thyroid carcinomas and accounts for up to 90% of all thyroid malignancies. It is the most indolent form of the disease and has an excellent prognosis. On the other hand, Primary thyroid lymphoma (PTL) is a rare entity accounting for only about 1% to 5% of all thyroid malignancies and only 2% of extranodal lymphomas. Synchronous PTC and PTL is a very rare condition and only a few cases have been reported in the literature up till now. We report one such case in a 52-year-old lady who was referred to us with goiter and progressively increasing difficulty in breathing.

Primary thyroid lymphoma (PTL) is a rare entity which accounts for only about 1% to 5% of all thyroid malignancies and only up to 2% of extranodal lymphomas.1,2 Clinical manifestation can vary but it is usually characterised by painless thyroid mass, rapidly enlarging in size and associated with compressive signs and symptoms such as shortness of breath, stridor, difficulty in swallowing and  hoarseness.3

Occurrence of simultaneous PTL and PTC is very rare and only a few cases have been reported in the literature.3 Here, we report a rare case of synchronous thyroid malignancy of PTC and PTL and further discuss the management of this case and sum up the characteristics of these diseases based on the available literature.

A 52-year-old female patient was referred to the ENT clinic of Aga Khan University Hospital, Karachi in April, 2019 with complaint of gradually progressive painless neck swelling for the last one year associated with difficulty in breathing for the past three months. There was no history of change in voice, dysphagia or weight loss. The patient had no family history of thyroid diseases, immunodeficiency or prior malignancy or radiation to the neck.

On physical examination, her thyroid gland was grossly enlarged, measuring approximately 8 x 6 cm in size and the left lobe was larger than the right one. Swelling was firm, non-tender and moving while swallowing. Multiple cervical lymph nodes were palpable at left level II to V. No significant findings were noted on systemic examination.

Laboratory work up was performed which showed normal thyroid profile. Ultrasound of the neck showed heterogeneously enlarged thyroid gland with left- sided cervical lymphadenopathy. Contrast enhanced computed tomography (CT) scan showed enhancement of the left thyroid lobe with compression of the trachea, along with multiple enlarged lymph nodes at the left level II to V and in the central cervical compartment. Level III and IV nodes were compressing the left internal jugular vein (IJV). As ultrasound had revealed a left thyroid heterogenous lobe, ultrasound-guided Fine Needle Aspiration Biopsy (FNAB) was done from the left lobe. The smear revealed scattered lymphocytes, a few macrophages and plasma cells against haemorrhagic background with scanty colloid. Clusters and groups of Hurthle cells and a few clusters of follicular cells were also present. The cytologist was of the opinion that there was a possibility of Hashimoto’s thyroiditis. As the patient complained of compressive symptoms and progressive difficulty in breathing, she underwent total thyroidectomy with central and left level II to V neck dissection.

On the first post-operative day, the patient had a neck drain output of 800ml in 24 hours. Chyle leak was suspected and, therefore, Somatostatin 10mg subcutaneously was given every eight hourly, fat-free diet was started and bolster dressing over left neck was applied. On the next two days the drain output increased to 1,320 ml and 1,980 ml, respectively. The patient was kept NPO and fluid replacement with electrolyte monitoring was done. Despite all the measures the neck drain output continued to be more than 1,000 ml for the following two days.

The patient underwent re-exploration of the neck and the Chyle leak was repaired. Intra-operatively Chyle leak was identified at level IV, and multiple under-running sutures were taken to stop the leak. Valsalva was given and no leak was identified intraoperatively after the repair. Post-operatively she remained stable, the drain output was less than 30 ml on the next two days and she was discharged after the removal of the drain. 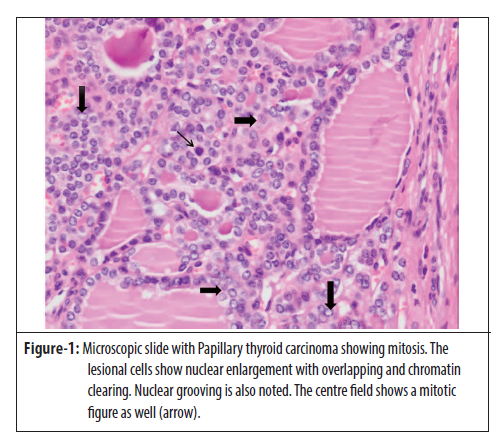 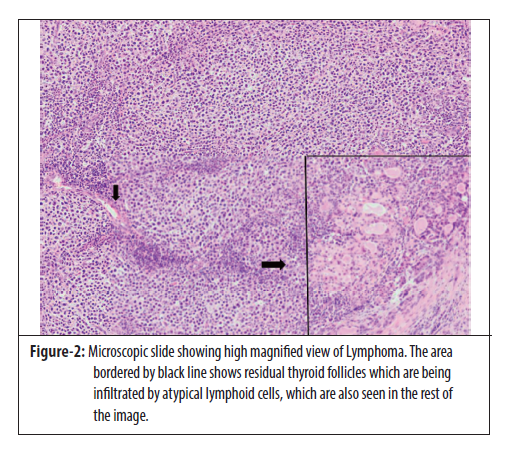 She was referred to the medical oncologist for chemotherapy and was given six cycles of R-CHOP regimen. She was also referred to the endocrinologist and nuclear medicine for thyroxine replacement. Radioactive iodine ablation (RAI) was not given as the pathological staging of PTC was pT1a N0. She is on regular follow-ups and after a year of completion of the treatment she is disease free.

Up to 20% to 50% of the patients with PTC have cervical metastasis at the time of diagnosis. The most common site for regional metastasis is central level VI and rarely in lateral neck and anterior mediastinum.14 Similarly, neck nodal involvement is also a common presentation in cases of lymphoma.15 In our patient, there were multiple enlarged cervical lymph nodes on the left side, fused together with each other. FNAC of the lymph node should have also been performed to confirm metastasis from PTC or any other lesion. Similarly, in patients with Hodgkin’s lymphoma (HL) and a suspicious thyroid nodule, a FNAC of that nodule should be performed to confirm the diagnosis and exclude thyroid malignancy.4

Due to lack of a standard approach for synchronous multiple primary malignancies, it is always very difficult to manage such cases. Surgery is the mainstay of treatment for thyroid cancers followed by radioactive iodine (RAI) therapy after the surgery to improve the outcomes by looking after the residual or persistent disease in patients with differentiated thyroid cancer,14 whereas in cases of HL, chemotherapy and radiotherapy are the frontline treatment options16 and with the recent advancements in the treatment protocols, 90% of the patients with HL achieve an excellent control of the diseases.15

When a patient is diagnosed with synchronous PTC and lymphoma, starting the treatment of lymphoma will be the optimal option, given the fact that PTC is the most idle form of thyroid cancer17 and enlarged cervical lymphadenopathy secondary to lymphoma will disappear or regress after the treatment of lymphoma, thus making surgery for PTC much easier with decreased chances of complications and incomplete surgery.4 In this case, cervical lymph nodes dissection could have been avoided as these nodes would have responded to chemoradiotherapy and, hence, we agree to the “Lymphoma first approach” recommended for the synchronised condition.4,9

Our patient developed Chyle leakage post-operatively which is the surgical complication of extensive neck dissection.18 Although we were able to manage this complication, it should be kept in mind that if the “Lymphoma first approach” was opted for this patient, lateral neck dissection and its possible complication could have been avoided. Therefore, we suggest that in cases of synchronous PTC and HL, initial treatment plan should be chemoradiotherapy followed by total thyroidectomy and RAI therapy.

Synchronous PTC and lymphoma is an extremely rare condition which poses a significant management challenge. Lymphoma first approach should be opted for in such cases, followed by total thyroidectomy and RAI therapy for thyroid malignancy to achieve optimal long-term survival. Studies with larger sample size are required to further clarify this condition.

Informed consent: Consent was taken from the patient to report this case.