Methods: The interventional study with secondary data was conducted in the Neonatology Department of the Children’s Hospital and the Institute of Child Health, Lahore, Pakistan, using 2-year data of all the training workshops from 2017 to 2018. The participants were consultants, post-graduate residents, nurses, lady health visitors, lady health workers and rescue workers. Knowledge was tested through a true/false questionnaire regarding resuscitation skills both before and after the hands-on workshop. The score of each candidate was recorded on a results sheet. Baselines scores were compared with respective post-workshop test. Data was analysed using SPSS 20.

About 5.4 million children aged <5 years die worldwide every year, and 45% of them are newborns. According to the World Health Organisation (WHO), about two-third of these newborns die in the first 24 hours. Pakistan ranks among the countries with highest neonatal mortality rate (NMR). In 2017, the NMR in Pakistan was estimated to be 42/1000 live-births.1,2

The initiation of breathing is a critical step in the physiological transition of a baby from intra-uterine to extra-uterine life. Approximately 85% of babies born at term will initiate spontaneous breathing within 10-30 seconds of birth, an additional 10% will respond to drying and stimulation, 3% will initiate respirations after positive-pressure ventilation (PPV), 2% will be intubated to support respiratory function, and 0.1% will require chest compressions (CCs) and/or drugs to achieve this transition.6,7 Effective resuscitation during the Golden Minute, which is the first minute of life post-delivery, can improve mortality and morbidity from this preventable cause. Therefore, training programmes on neonatal resuscitation for all health workers involved in the management of the newborn at birth are vital to improve neonatal survival. In developed countries, different training programmes are conducted, like helping babies breathe (HBB), neonatal resuscitation programme (NRP) and newborn life support (NLS). All these training programmes are similar, but with minor differences and are based on the guidelines of the International Liaison Committee on Resuscitation (ILCOR). Such training programmes are regularly conducted and monitored by resuscitation councils, and studies have shown improvement in knowledge and skills of healthcare workers after attending these workshops.8-12

In Pakistan, a training programme called the Neonatal Life Support (NeoLiS) was developed in 2008 which was also based on ILCOR guidelines and endorsed by the Pakistan Paediatric Association (PPA). The current study was planned to assess the improvement in knowledge of healthcare professionals after attending the NeoLiS training workshop.13

The interventional study with secondary data was conducted in the Neonatology Department of the Children’s Hospital and the Institute of Child Health, Lahore, Pakistan, using 2-year data of all the training workshops from 2017 to 2018. The workshop was developed keeping in view the facilities available for effective resuscitation at different levels of healthcare establishments in the country, and without compromising on ILCOR guidelines. The first part of technique related to the Golden Minute was influenced by HBB, but continued further on to the administration of drugs. Thus, it was simpler, evidence-based and avoided confusion in techniques in different resuscitation programmes developed by different countries. Moreover, it was easier for the facilitators to follow one algorithm where they taught only the initial part, up to airway management, to nurses and midwives working in level-I healthcare facilities, and continued further to the injection of drugs while training doctors and nurses in Level-III hospitals. The workshops were regularly arranged and monitored by the Neonatal Resuscitation Council of PPA and the Directorate of NeoLiS. Each workshop consisted of 25-30 participants who were doctors, both consultants and post-graduate residents, nurses and paramedics, including lady health visitors (LHVs), lady health corkers (LHWs) and rescue workers. All individuals who participated in the workshops were included, but those who did not completely fill the questionnaire were excluded. Knowledge was tested through a true/false questionnaire regarding resuscitation skills (Annexure) both before and after the hands-on workshop. 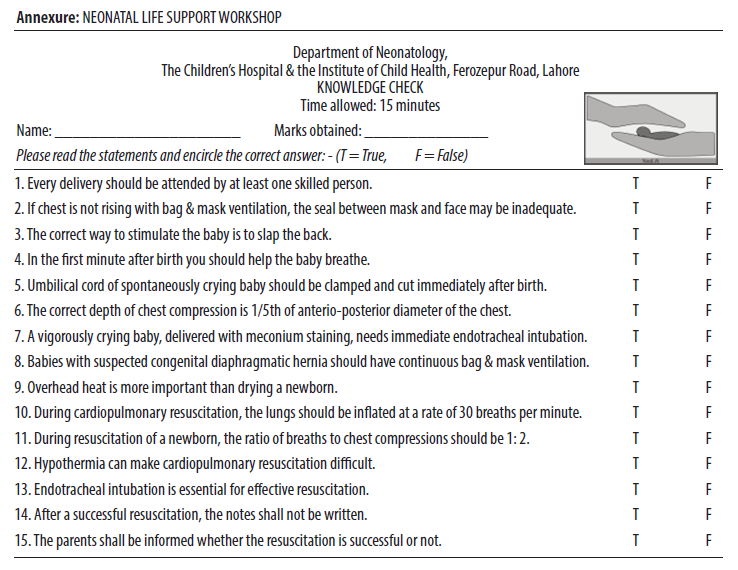 Each question carried one mark. The score of each candidate was recorded on a results sheet. Baselines scores were compared with respective post-workshop test. Data was analysed using SPSS 20. P <0.05 was considered significant.

The difference was significant for all the three catgories of healthcare workers (Table 2).

Resuscitation at birth is the cornerstone to preventing birth asphyxia and associated morbidity, like cerebral palsy (CP). It is estimated that each CP patient consumes about £750,000 during his/her lifetime for treatment which otherwise could be spent on national development projects. Preventing asphyxia, therefore, not only saves a newborn from lifelong disability, but also saves a family from perpetual emotional trauma and the nation from diverting huge amount of funds for treatment and rehabilitation of disabilities associated with CP. An effective neonatal resuscitation course is expected to improve the knowledge of all cadres of healthcare professionals.14

A study on HBB workshop assessed skills of physicians, nurses and other health workers, showing overall improvement from pre-workshop mean score of 8.7/10 to a post-workshop mean of 9.4/10.15 Another study assessed the educational effectiveness of HBB in healthcare professionals and found marked improvement in knowledge and skills after such courses.16 The results of these studies are consistent with current findings.

Healthcare professionals, like physicians, nurses and paramedics, have different sets of background knowledge regarding resuscitation and therefore, the outcome of these resuscitation workshops sometimes depend on their previous knowledge. A study showed that there was only modest gain in knowledge after a workshop as it had enrolled only undergraduate students who had no background knowledge of resuscitation.17 Similarly, a study on Paediatric residents also showed modest gain in knowledge after NRP.18 Another study on HBB included physicians and nurses, and reported marked improvement in knowledge post-workshop. However, the overall score percentage of nurses was lower than that of the doctors though post-training even those nurses who commonly did not perform these skills in real-life situations were also able to perform at a level similar to that of the physicians.19 The current study also showed significant improvement in knowledge of staff nurses and paramedics after attending NeoLiS workshop. However, the overall results of staff nurses and paramedics were lower compared to those of the doctors. This is likely due to the previous background core knowledge of doctors about resuscitation.

The knowledge and skills gained by healthcare professionals during neonatal resuscitation workshops are expected to decline over time and need to be updated on a regular basis. A study on NRP assessed knowledge using a questionnaire and concluded that the scores significantly improved after the course. However, scores at 6-month follow‐up were significantly decreased from post-test, while remaining significantly higher compared to the pre-test performance.20 Another study showed that skills declined more than knowledge over time.21 Likewise, in the current study, immediate assessment of knowledge after the workshop showed significant gains in results. However, further studies are required to assess the long-term impact of these workshops on healthcare professionals.

The NeoLiS training workshops resulted in significant gain in knowledge about neonatal resuscitation by healthcare professionals when assessed immediately after the workshop.

14.    Azzopardi D, Strohm B, Linsell L, Hobson A, Juszczak E.  Implementation and Conduct of Therapeutic Hypothermia for Perinatal Asphyxial Encephalopathy in the UK – Analysis of National Data. PLoS ONE 2012; 7: e38504.