Whiplash is a soft tissue injury of the cervical spine that is generally caused by trauma from a motor vehicle accident or gunshot. It is associated with a wide range of clinical symptoms, including neck pain and stiffness, pain and restricted movement in the upper arms. We report the manifestations of this trauma within the beliefs and psychological functioning based on a comprehensive psychological assessment that include a review of hospital records, clinical examinations, a structured clinical interview, an inventory of psychosocial function, and a post-traumatic maladaptive belief scale. The results show that the patient’s traumatic cervical syndrome manifested as moderate impairment in friendships and romantic relationships which reveal severe daily impairment in work, parenting, and self-care activities. The study further suggests that the injury is associated with maladaptive beliefs and significant impairment in psychosocial functioning.

Neuropsychiatric disorders are major public health problems, constituting 10.4% of the global disease burden.1 Whiplash is the most common injury following traumatic events such as motor vehicle accidents, falls, and gunshot wounds. Approximately 83% of people suffering from this kind of injury develop severe disabilities.2,3 In the US, the annual economic burden of whiplash injuries is about $3.9 billion, including medical treatment and rehabilitation.

Spinal cord injuries (SCIs) can contribute to physiological, biological, and neurological injuries as well as psychological disorders such as mood disorders, anxiety, and depression.4 One of the studies revealed that depression rate among patients with a history of SCI ranges from 18.7 to 26.3%.5 A longitudinal study compared the anxiety and depression rates among SCI patients, 3 years post-discharge findings revealed that SCI patients are more vulnerable to anxiety and depression.6 Furthermore, depression and anxiety are the most common psychological disorders in the West and Asia Pacific, and their environmental and genetic factors play an important role in their development. Anxiety and co-morbid symptoms of depression are commonly reported in clinical settings and their combination can decrease the quality of life and increase disability which may complicate the healthcare response.7 Therefore, the current case report sought to examine the socio demographic factors related to the development of depression and anxiety following severe traumatic cervical spine injury.

A 38-year-old male patient was brought by a Rescue 1122 team to the emergency unit of a local District Headquarter Hospital (DHQ) Multan, with multiple serious injuries, including a deep laceration on the right occipital region of the head and a deep wound on the neck. He initially presented with vomiting and minor ear and nose bleeding and was determined to be unconscious, with a score of 7 out of 15 on the Glasgow Coma Scale (GCS). He received initial treatment at the emergency unit, where he was diagnosed with a firearm injury (FAI) on the left side of the neck, and subsequently he was moved for observation to the intensive care unit (ICU).

After 36 hours, the patient gained consciousness, receiving a GCS score of 13, and a comprehensive examination was performed, including a blood chemistry test and radiograph. Magnetic resonance imaging (MRI) of the spine revealed a “fracture of the spinous process of C4 vertebral body with multiple adjacent small bony chips, haematoma and specks of air adjacent to fracture and in the track of the bullet on left lateral side of neck.” The patient reported severe neck pain, upper arm immobility, and difficulty in walking. Given the findings of the medical history, physical examination, and blood tests, he was diagnosed with grade-IV traumatic cervical spinal cord injury with whiplash disorder. When discharged from the hospital, he sought follow-up and rehabilitation. Literature suggests that people with disabilities are prone to psychological dysfunction.8 Therefore, after the patient’s third month of rehabilitation services, a psychological assessment was conducted in the month of January 2020, to assess his functional impairment and maladaptive beliefs.9 Ethical approval was obtained from the Department of psychology ethics committee (DPEC), International Islamic University, Islamabad (IIU-FSS/PSY/DPEC/-2019-8/01/2020), for submitting the case report for publication. Before applying the psychological tests, the patient and his caregivers were informed about the procedure and ethics of the study and subsequently informed and written consent was obtained from the patient and his caregivers. Subsequently the following instruments were used to determine the possibility of the physical and psychological problems.

Glasgow Coma Scale (GCS) is the most common scoring method, which is widely used to describe the consciousness of a person particularly following a traumatic injury.10 Therefore, GSC was used to assess the consciousness level of the patient. Subsequently, Magnetic resonance imaging (MRI) was used to assess the morphological changes in craniocervical junctions. MRI finding indicates that the patient has grade-IV traumatic cervical spinal cord injury with whiplash disorder. Furthermore, The Quebec classification of whiplash associated disorders is used to assess whiplash injury. It assesses neck symptoms and spinal issues (e.g., fracture, dislocation, and neurological problems). It is a five-level severity classification ranging from 0 to IV. Grades 0, I, and II cover whiplash injuries, while grades III and IV indicate traumatic cervical spinal cord injury.11 Furthermore, inventory of psychosocial function (IPF) was used for assessment of functional impairment. It is a self-rating scale consisting of 80 items which measures seven different functional domains related to work, friendships and socialization, romantic, family relationship, education, self-care and parenting. It has a good content validity, and reliability. Initially, for the IPF, respondents were asked to answer a dichotomous yes/no about the application of each domains in last 30 days. If the functional domain is relevant than the respondent is asked to respond to each question related to that domain on a Likert scale ranging from 0=Never” to 6=Always”.12 Furthermore, a posttraumatic maladaptive belief scale (PMBS) was developed to assess the maladaptive belief occurring after traumatic events. It measures the personal belief associated to trauma. It is 15 items scale of 7 point Likert ranging from 1=not true, 7=completely true.9 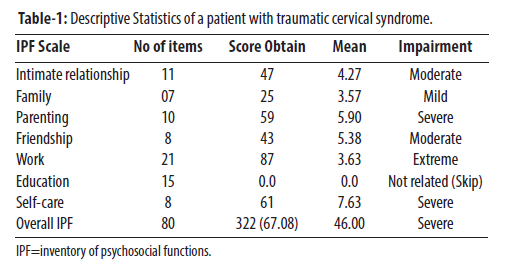 Table-1 represents the Descriptive Statistics of the patient with traumatic cervical syndrome.

Traumatic cervical spine syndrome, in general, and particularly with the Whiplash Injury, is a serious public health issue and is associated with physical and psychosocial impairment. Such problems also contribute significantly in the global burden of diseases. Some empirical work shows that there is a relation between psychosocial functions and trauma related disorder, including PTSD. A study reported that divorce ratio was found to be twice as much in combat veterans suffering from trauma related disorders like PTSD, as compared to non-PTSD veterans.13 Trauma related disorders not only affect the learning process, at the same time it also disturbs the occupational life of trauma survivors.14

In the current study we have also demonstrated that how an individual suffering from traumatic cervical syndrome with whiplash injury survived and subsequently developed personality and behavioral issues. After comprehensive physical investigation and psychological assessment findings show that patient’s personal relationship with spouse or partner was moderately disturbed particularly in the last 30 days and family relationships were mildly impaired. Furthermore, severe and moderate impairment had been seen in his parenting friendship relationship, and socialization from the last 30 days. Similarly, result showed extreme and severe impairment in work including home based work and self-care. However, the patient skipped the educational related domain because it was not related to him. The current result showed that the patient produces a high score in terms of overall IPF, which indicates severe psychosocial impairment and disability. The result in table 2 showed that a high score on post-traumatic maladaptive belief scale indicates that the patient has dysfunctional belief after traumatic events. Similarly, high scores were seen on sub-scales such as threat to harm, self-worth and judgments and trustworthiness. High score on threat to harm indicates the perception that the world is a dangerous place. This is very important, because self-worth and judgment reflects the perception of one’s own ability to manage challenges and obstacles in daily life, while reliability and trustworthiness reflects that other people can be trusted in a relationship. Our findings suggest that this individual has developed psychosocial impairment in the consequence of traumatic cervical syndrome. In addition to this, he also developed maladaptive beliefs which need to be further investigated and therefore, need to be dealt with evidence based intervention.

This study has presented only a single case of a gunshot wound, and these findings may not necessarily be applicable to other cases. Researchers and therapists should carefully utilize the findings as per context and situation of their cases. Moreover, time duration and nature of injury play an important role in the diagnostic process, and researchers approached this case study after three months of trauma due to nature of injury. Future studies should carefully address these aspects.

This case report finding demonstrated that psychometric instruments may be utilized to add into the treatment plans of traumatic cervical syndrome associated with severe psychosocial impairment in comprehensive health assessment. Such practices will facilitate therapists to characterize the psychological difficulties clearly and plan evidence -based psychosocial intervention, facilitating rehabilitation.