Objective: To determine the diagnostic accuracy of the bedside index for severity in acute pancreatitis in comparison with Ranson scores in predicting mortalities and severities in patients with acute pancreatitis.

Methods: The cross-sectional study was conducted at the Department of Emergency Medicine, Aga Khan University Hospital, Karachi, from July 1, 2017, to January 1, 2018, and comprised patients who presented with acute pancreatitis. The bedside index for severity in acute pancreatitis score was applied in the emergency department and the patients were followed up in ward/intensive care unit where Ranson scores were calculated within the following 48 hours. Both the scores were calculated and compared for the prediction of severity and mortality for each patient. Data was analysed using SPSS 20.

One of the most common pathologies diagnosed in patients presenting with abdominal pain coming to the emergency room (ER) is acute pancreatitis (AP), which is a major surgical challenge1 with the most common triggering factor being gall stones.2 It is the inflammation of the pancreas in which there is sudden activation of pancreatic enzymes which self-digest and self-destruct the pancreas itself. It is self-limiting in majority of cases, and requires only symptomatic treatment, but severe disease is present in 20-30% cases that can progress to systemic inflammation and cause life-threatening necrosis of the pancreas, multi-organ failure and can potentially lead to death.2,3 A clinically-based classification system, the Atlanta Classification, is widely used and accepted universally.4 Quick, accurate and early evidence-based risk stratification of patients allows early initiation of intensive care therapy for patients with severe acute pancreatitis (SAP) to prevent adverse outcomes, like severe disease and mortality.5 Therefore, a tool that can stratify risk reliably in predicting severity and prognoses of AP is of great importance when it comes to managing AP patients.2

Accuracy, simplicity, promptness and precision are the characteristics of an ideal scoring system and one which can have reproducible description of the severity of disease. There are a variety of systemic scores available to evaluate and predict the severity and mortality in AP patients. Ranson score, Acute Physiology and Chronic Health Evaluation-II (APACHE II) and Computed Tomography Severity Index (CTSI) are among the common scoring systems used.6 Complex scoring systems, like APACHE II, are suited well for the purpose of research, but a more simplified scoring system, such as the Bedside Index for Severity in AP (BISAP) is required to help physicians in their routine clinical practices, predicting patient’s adversities in a timely fashion.7 However, all scoring systems have their own advantages and limitations. For example, one of the limitations of the Ranson criteria is missing the early therapeutic window as the score is not completed till 48 hours of presentation of an AP patient.3 APACHE II has its complexity as a major drawback and limitation, but has the advantage of allowing determination and prediction of disease severity on the very day of hospital admission.7 CTSI cannot reflect the inflammatory and systemic response of patients, as its calculation is based on computed tomography (CT) scan findings of some local complications.6

The BISAP has been recently applied as a simple and accurate method in predicting AP severity, with studies demonstrating its accuracy8 and mortality predictions being similar to those of the other scoring systems, including APACHE-IIand Ranson scores.6 BISAP was not only proven to have high specificity, but also has a higher negative predictive value (NOV) at scores >3.9 Incremental rise in the value of BISAP score from 3 and above has shown to correlate with an increased risk of pancreatic necrosis leading to multi-organ failure (p<0.0001), and death as the outcome.9

The current study was planned to determine the diagnostic accuracy of BISAP in comparison with Ranson scores in predicting mortalities and severities in AP patients in an ER setting.

The cross-sectional study was conducted at the Department of Emergency Medicine, Aga Khan University Hospital (AKUH), Karachi, from July 1, 2017, to January 1, 2018. Approval from the institutional ethics review committee was taken, also exemption for consent was accepted by the hospital ethical review committee as this study was cross sectional and did not require any interventions. The sample size was calculated by assuming sensitivity 71.5%, specificity 99.1% and prevalence 31.25%.8 The sample was raised using consecutive non-probability sampling technique.

Those included were patients aged 16-75 years presenting to the ER with epigastric pain who were found to have AP on the basis of amylase or lipase level thrice the normal value. Those excluded were patients with chronic kidney disease (CKD), tumour lysis syndrome, chronic liver disease (CLD), patients referred from other hospitals after 1-2 days of Ap diagnosis and patients leaving against medical advice (LAMA) <48 hours post-admission.

True positive (TP) level was set at score >3 for both BISAP and Ranson, false positive (FP) at score >3, true negatives (TN) at score <3, and false negative (FN) at score <3. Sensitivity was taken as the ability to rule out mortality, meaning TP + FN. Specificity was the ability to rule in mortality, meaning TN + FP. Mortality was defined as death occurring within hospital stay or within 28 days, and that was labelled as positive.

Data was collected using the Emergency Severity Index-IV (ESI-IV) as a triaging tool on the electronic database. Triage system ESI-IV has five levels, from P1 to P5, with P1 requiring immediate intervention, P2 being in a high-risk situation, while P3-P5 patients were categorised as per the number of resources utilised in management. At the triage counter, a standard set of vital signs were measured and documented for all patients. All patients who came with severe abdominal pain and were being managed in ER for AP were enrolled using electronically-generated medical record numbers. BISAP score was applied and calculated in the ER, and the patients were followed in ward/intensive care unit (ICU) where the Ranson score was calculated in the following 48 hours. Both the scores were calculated to predict severity and mortality for each patient.

Data was analysed using SPSS 20. Mean and standard deviation (SD) of all quantitative variables, like age, systolic blood pressure (SBP), HR, BISAP and Ranson scores, were calculated. Also, shock index (SI) values were derived by dividing HR with SBP.Frequencies and percentages were calculated for gender, disposition, level of care and mortality in Ranson and BISAP. Tables (2 x 2) were used to calculate specificity, sensitivity, diagnostic accuracy (DA), NPVs and positive predictive values (PPVs) for BISAP and Ranson scores while keeping Ranson score as the gold standard. Effect-modifiers, like age, gender, episode of pancreatitis, shock index, disposition of patient and level of care, was dealt with through stratification and 2 x 2 tables to calculate specificity, sensitivity, NPV, PPV and DA for BISAP and Ranson scores.

TP, FP, FN and TN values of the two scores were worked out (Table 3). 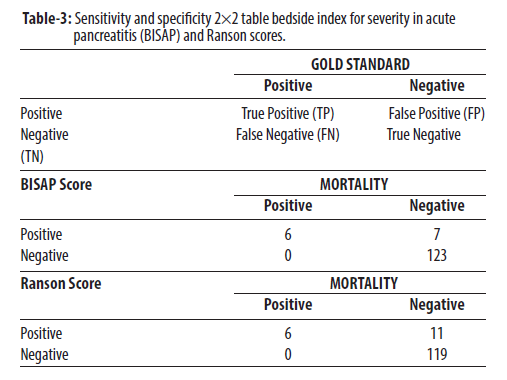 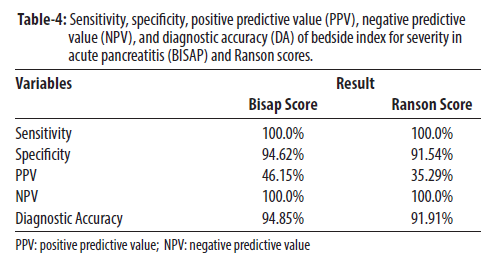 AP can present in varying degrees, from a mild, self-limiting disease to a severe and potentially life-threatening condition. AP is a common surgical condition that is seen worldwide associated with morbidity/mortality, and adding to the burden on healthcare systems10 with several studies reporting an increase in the incidence of disease annually.11 As Ranson score is most commonly used for the identification of AP severity and mortality in the current setting, the current study used BISAP score for predicting the same severity in the local population because of its early identification of AP severity and mortality as well as due to its cost effectiveness.