Method: The cross-sectional study was conducted from November 2018 to December 2019 after approval from the Gomal University, Dera Ismail Khan, Pakistan, and comprised blood samples from transgender sex workers who were seropositive for human immunodeficiency virus-1 and seronegative for human immunodeficiency virus residing in two cities of Khyber Pakhtunkhwa province and Islamabad, the federal capital. Formalin-fixed paraffin-embedded (FFPE). Samples were collected from the partner institute along with the patients data, but without any follow-up from the study subjects which was purely on the basis of physical availability. β-globin gene and EBER-1(EBV encoded small RNA-1) were amplified for qualitative assessment and existence of Epstein-Barr virus. Characterisation of EBNA-2 (EBV Nuclear Antigen-2 was done through nested polymerase chain reaction.

Results: Of the 80 subjects, 40(50%) each were seropositive and seronegative individuals. The overall mean age was 28±6.917 years. Among the seropositive group, 38(95%) were homosexual and 2(5%) were heterosexual. Among the seropositive group, 16(40%) had Epstein-Barr virus genotype 1 and 6(15%) had genotype 2, while co-infections were found in 2(5%) subjects. In the seronegative group, 36(90%) subjects had Epstein-Barr virus genotype 1, while there was no case of genotype 2 or co-infection. EBV-2 genotypes with HIV seropositivity showed strong association (p=0.005). Amplification for the EBER-1 gene was done in all the 80(100%) samples.

Conclusion: Epstein-Barr virus EBV genotype 1 was found to be the most frequent type, while genotype 2 and co-infections were detected in only seropositive samples.

Epstein-Barr virus (EBV) is a gamma-herpes virus and is responsible for causing persistent infections in humans globally.1,2 The distinct response of B lymphocytes to EBV can be observed in lymphoproliferative diseases of B cell origin, such as opportunistic infections and lymphoma cases.3 EBV strains are generally classified into EBV-1 and EBV-2 types.4 Its genotypes are characterised using gene sequences that encode EBNA-2 (EBV Nuclear Antigen-2), 3A, 3B, and 3C proteins.4 Transmission of both EBV-1 and EBV-2 occur orally, through sexual contact, as well as through blood, and cause infection of B lymphocytes.5 Mostly, only one of the two sub-types have been found in peripheral blood B lymphocytes of healthy individuals.6 EBV-1 infects white and Asian communities more frequently,5,7 whereas in African countries, both EBV types have been found.6 Regarding Pakistani population, the prevalence of EBV in those infected with human immunodeficiency virus (HIV) is not known. EBV-2 infection has more frequently been observed in HIV-infected patients and those with acquired immunodeficiency syndrome (AIDS).8,9 Interestingly, homosexual men have been shown to have EBV-2 infections more commonly than EBV-1.8-10 The transgender Pakistani community associated with sex work is thus at a comparatively higher risk of having and transmitting sexually-transmitted diseases (STDs). Sharing of needles and reusing the same for injecting drugs have put such addicted people at higher risk of having infectious diseases. As shown previously, HIV infection has high prevalence in transgender sex workers (TSWs) in Pakistan.11

The current study was planned to see any possible relationship beteween EBV genotypes and HIV seropositive TSWs of Pashtun ethnicity.

The cross-sectional study was conducted from November 2018 to December 2019 after approval from the ethics review committee of Gomal University, Dera Ismail (DI) Khan, Pakistan, and comprised blood samples from TSWs who were seropositive for HIV-1 and seronegative for HIV residing in two cities of Khyber Pakhtunkhwa (KP) province and Islamabad, the federal capital.  After taking informed consent from each subject, formalin fixed paraffin embedded samples were collected from the partner institute, along with the patient’s information and the patients were not reached further for any follow up. Collection of blood samples was purely on the basis of physical availability of the individual.

Amplification of β-globin gene through polymerase chain reaction (PCR) was used for proper functioning of amplification of reaction. β-globin primers were used to detect the 130bp product. For PCR reaction to perform, the same thermocycling conditions were used as described in literature.13

EBV DNA was confirmed by amplification of EBER-1 product of 140bp (Figure) through EBER-1 primers(Table 1). 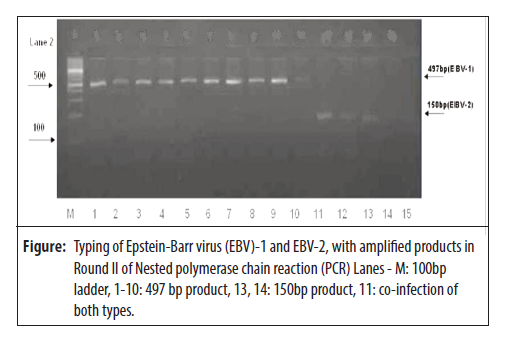 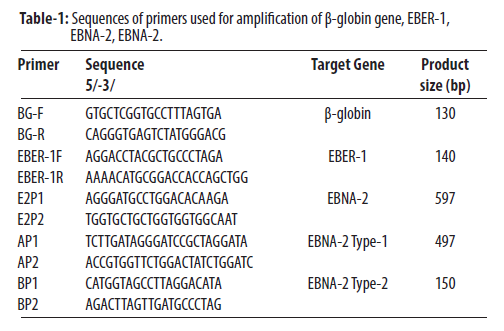 The reaction mix of 25µl consisted of 260ng DNA, 240µM of each  deoxynucleoside triphosphate (dNTP), 1 U of Taq polymerase, 7.5pmol of each primer and 1x Taq reaction buffer. The reaction was carried out through 30 cycles that consisted of 30 seconds denaturation at 95oC, 30 seconds annealing at 57oC and 30 seconds extension at 72oC. Denaturation in the beginning was done at 95oC for 5 minutes, while the final extension was done at 72oC for 10 minutes.

EBNA-2 gene was amplified with specific set of primers.14 For amplification through nested PCR, thermocycling conditions.13 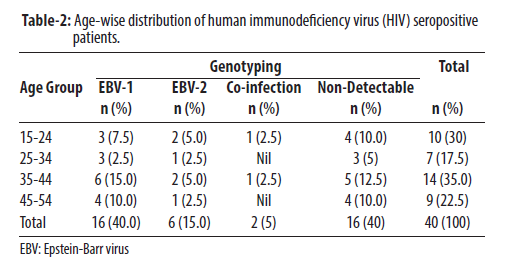 In the seronegative group, 36(90%) subjects had EBV genotype 1, while there was no case of genotype 2 or co-infection (Table 3).

The incidence of EBV genotypes in relation to homosexual and heterosexual orientation was also noted (Table 4). 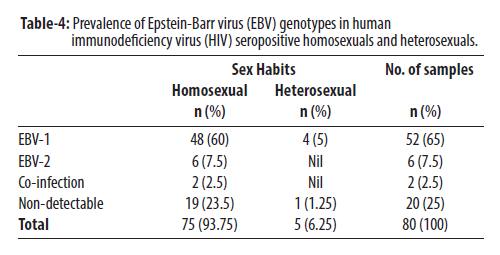 EBV-2 genotype with HIV seropositivity showed strong association (p=0.005), while the incidence of EBV genotype in relation to homosexual and heterosexual orientation was not significant (p=0.6).

To our knowledge, this is the first study reporting the prevalence of EBV infections in HIV seropositive individuals in this particular region.

In Pakistan, the epidemiology of HIV has been characterised in drug users and its transmission to other individuals of the community.15,16 The findings of the current study are in agreement with previous studies1,17,18 for the presence of EBV-1 and EBV-2 genotypes along with co-infections in Pakistani HIV seropositive sex workers. The prevalence of EBV genotypes among HIV seropositive transgenders in the current study was comparatively less frequent than the European population.7 Earlier studies on EBV strains in B lymphoblastoid cell lines showed 1-3% of healthy white EBV carriers in Europe harbouring EBV-2 strain,4 whereas EBV-2 prevalence in HIV seropositive subjects was found to be much higher at 50-62%.4,7 Detection of EBV-2 strain confirmed the current hypothesis of the presence of  EBV-2 strain in high-risk population of TSWs in Pakistan. Compared to the previous studies,7,15 the prevalence of EBV-2 and co-infections was found to be lower in this study, but it does not reflect the true picture of whole Pakistani community because the current study had a small sample size, used random sampling technique, and was limited to a small region. Interestingly, however, EBV-2 was detected only among homosexual HIV seropositive individuals and not in heterosexual individuals, showing its route of transmission through sexual contact, and this was in contrast to previous studies.11,15,16 The main reason behind high prevalence of EBV-2 in homosexuals is that those persons infected with HIV have the tendency of getting sex with HIV-seroconcordant persons and that may lead to exposure for more EBV-2 infections and transmission.

Due to the taboo associated with the sex trade, transgenders are not generally open to talking about their sexual interests and about sharing personal information. Considering the hardships associated with sample collection from TSWs, we could not follow the statistically-recommended (10% of the total population recommended generally) sample size. Consequently, samples were randomly collected from individuals who agreed to participate. This could be considered a limitation.

EBV-1 was found to be the most common genotype and EBV-2 prevailed only in homosexual HIV seropositive individuals.