An audit of gynae-oncology practices in ovarian cancer treatment based on enhanced recovery after surgery (ERAS) protocol amongst two gynae-oncology units, in UK and in Pakistan

Method: The retrospective cross-sectional study was done at the gynaecology departments of St Georges Hospital, United Kingdom, and the Aga Khan Hospital, Pakistan, and comprised data of an equal number of ovarian cancer patients from each centre who underwent ovarian cancer surgery from January 2015 to December 2016. The former centre practiced the enhanced recovery after surgery protocol, while the latter centre followed traditional practices. Data was analysed using SPSS 19.

Results: Of the 100 patients, there were 50(50%) in each group. Baseline variables were comparable except for diabetes which was more prevalent in the local group (p=0.03). Mechanical bowel preparation was performed in 47(94%) of local patients compared to 1(2%) in the other group, while the duration for nil-per-mouth status as well as the use of nasogastric tube and peritoneal drain were significantly different (p<0.05). Epidural anaesthesia was used in 39(78%) of patients in Pakistan compared to 4(8%) in the United Kingdom. The duration of thromboprophylaxis was also significantly different (p<0.05).

Conclusion: Implementation of enhanced recovery after surgery protocol was found to have the potential to improve postoperative outcomes and good functional recovery without compromising patient safety.

Gynaecological cancer surgery for ovarian malignancy is performed to stage the disease in the early stage and to undertake optimal cytoreduction in the advanced stage. Recovery of these patients from major surgery requires extensive medical and nursing input, as they usually have large abdominal incisions and extensive dissection.1 However, a rapid recovery is imperative to start timely adjuvant therapy, which is largely dependent on the prevention, the early detection and the prompt treatment of major intra- and post-operative complications.

The traditional peri-operative surgical practices include overnight fasting, bowel preparation, nasogastric (NG) tube, peritoneal drain insertion, and antimicrobial and thrombi-embolic prophylaxis to prevent infections and complications. The introduction of enhanced recovery after surgery (ERAS) programmes in the 1990s in Denmark changed the concept of peri-operative care.2 It was first used for patients undergoing colorectal surgery. Afterwards, it was adopted in other surgical disciplines, such as orthopaedics, gynaecology and urology.3,4 The key elements common to all ERAS pathways include pre-operative patient education, reduction of pre-operative fasting, omission of bowel preparation, peri-operative normovolemia, limited use of NG tubes and drains, early removal of urinary catheters, aggressive multimodal analgesia to minimise opiate consumption, early post-operative mobilisation and early oral nutrition.5,6

These innovations in practices have reduced morbidities associated with these major surgeries and have shortened the recovery time without adding to complications.7 To our knowledge, no study from Pakistan is available that assesses the benefits and safety of ERAS protocol in patients with surgical management of ovarian cancer.

The current study was planned to compare the peri-operative practices and complications in ovarian cancer patients undergoing upfront surgery for primary disease under the traditional practices and the ERAS protocol.

The retrospective cross-sectional study was done at the gynaecology departments of St Georges Hospital (SGH), National Health Trust (NHS), London, United Kingdom, and the Aga Khan University Hospital (AKUH), Pakistan, and comprised data of an equal number of ovarian cancer patients from each centre who underwent ovarian cancer surgery from January 2015 to December 2016. Data included pertained to patients having undergone primary cytoreductive surgery for advanced stage ovarian cancer determined by International Federation of Gynaecology and Obstetrics (FIGO) stages III and IV. Data related to those having undergone surgical treatment for recurrence of ovarian cancer and those who had neoadjuvant chemotherapy was excluded. The sample was raised using purposive sampling at both hospitals.

The target population was about 200 patients at each centre, but, as it was a clinical audit, a snapshot sample of 25% gave 95% degree of confidence that the sample was representative of the target population.8 Data was retrieved from electronic database and charts, and was noted using a pre-designed structured proforma.

Of the 100 patients, there were 50(50%) in each group. Baseline variables were comparable except for diabetes which was more prevalent in the local group (p=0.03) (Table 1). 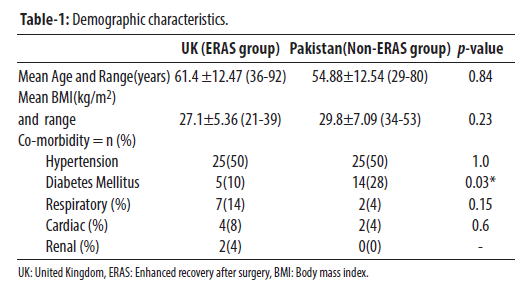 For post-operative pain relief, patient-controlled intravenous analgesia (PCIA) was employed in all ERAS patients, while an epidural for 48h was used in 39(78%) non-ERAS.

Postoperative thromboprophylaxis was low-molecular-weight heparin in both groups, but the duration of use was different (Table 2). 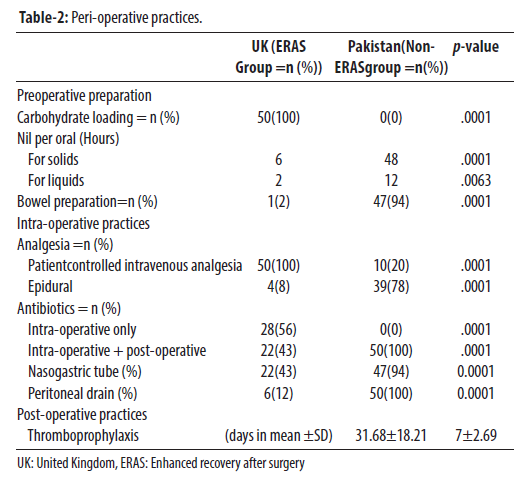 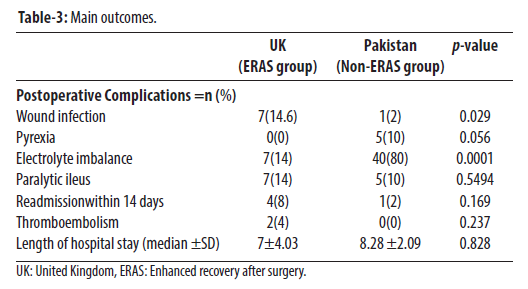 ERAS literature in advanced gynaecological surgeries, including gynaecological oncology, is relatively limited.4,7,9 The demographic data and co-morbidities in both groups in the current study did not show significant differences except for the presence of diabetes, indicating comparability.

Hunger, pain, fear and anxiety can all stimulate the stress response, which, in turn, can aggravate the risk of complications.10 The ERAS approach can reduce all these factors, thus reducing the stress reactions to surgery in these patients.

The policy of ’nothing by mouth after midnight’ before surgery is the traditional way of preparing patients for surgery to prevent aspiration during general anaesthesia, but this is not supported by evidence. Fasting results in significant detrimental effects by causing patient discomfort and metabolic changes that can adversely affect clinical outcomes. A systematic review also recommended fewer hours of fasting without an increase in the complication rate.11 This approach is also endorsed by the guidelines of the European Society of Anaesthesiology.12 In the current study, patients in the ERAS group refrained from solids for 6 hours and from liquids for only 2 hours, while patients in the non-ERAS group were largely kept on liquids for 48 hours prior to surgery, and consumed no liquids for almost 12 hours. Aspiration was not observed with reduced pre-operative fasting. The unfavourable effects of prolonged fasting could not be assessed because of the retrospective nature of the current study.

Pre-operative carbohydrate loading was not practised in the non-ERAS group, whereas it was given to all ERAS group patients. Studies have suggested that these supplements have low osmolality, and, hence, a very short stomach transit time. Also, these drinks are rapidly absorbed in the small intestine.13,14

Postoperative pain control can be administered by either epidural or PCIA.17,18 ERAS proponents do not favour epidural analgesia because of concerns regarding its effects on post-operative mobility of the patient, a delayed return of bowel activity and a delay in the removal of the catheter.19,20

A significantly higher number of patients in the non-ERAS group had had an NG tube and peritoneal drains inserted and kept in place in the early post-operative period with possibly no benefit. These measures were used due to the belief that gastric emptying is slowed because of the total omentectomy, and that gastric stasis can be a risk factor for an increased rate of post-operative nausea, vomiting and pulmonary complications. This is contrary to the results of a meta-analysis that showed no effect on the resumption of bowel function without NG decompression.21

The length of stay (LOS) was almost similar in the current study groups, which is not consistent with the findings of other studies related to benign hysterectomy and colorectal surgery,1,22 where LOS was found to be significantly reduced in ERAS patients. In the current study, two patients in the ERAS group had prolonged stay of 18 and 20 days due to pulmonary embolism (PE). Decreased LOS reduces the cost of inpatient admissions and post-operative complications. A meta-analysis of colorectal surgical patients and a study comprising patients from all surgical disciplines reported that ERAS is cost-effective.23,24 A small sample size and flexibility in adherence to the ERAS protocol may have added inconsistency to the results of the indexed study.

Complications and re-admissions were comparable in both groups in the current study, indicating that implementation of the protocol was safe, as has been shown by two RCTs.25,26

The result of the current audit implies that implementation of ERAS practices can lead to the improvement of post-operative outcomes and good functional recovery by decreasing morbidities and length of stay with no compromise on patient safety.27

Implementation of ERAS protocol was found to have the potential to improve post-operative outcomes and good functional recovery without compromising patient safety. The protocol can be safely employed in healthcare institutions in the developing countries.