Comparison of perioperative analgesia between intravenous paracetamol and fentanyl for rigid hysteroscopy: A randomised control trial

Objective:  To compare efficacy of intravenous paracetamol and fentanyl for intra-operative and post-operative analgesia in patients undergoing rigid hysteroscopy.

Method: The prospective randomised control trial was conducted at Aga Khan University Hospital, Karachi, from October 2016 to June 2017, and comprised patients aged 18-65 years with American Society of Anesthesiologists grade I or II undergoing hysteroscopy who were randomised into paracetamol group P and fentanyl group F. Anaesthesia induction technique was standardised and analgesia in group P was paracetamol 15mg/Kg administered 15-30 minutes pre-surgery, and in group F, it was fentanyl 2mcg/kg administered at induction of anaesthesia. Intra-operative pain was assessed by changes in heart rate, systolic, diastolic and mean arterial blood pressure, and post-operative pain was assessed using the visual analogue scale. Data was analysed using SPSS 19.

Results: Of the 60 patients, there were 30(50%) in each of the two groups. Baseline parameters were similar in the groups except for age differences (p<0.011). In group P, mean systolic blood pressure at 10,15, 20, 25 and 30 minutes, mean diastolic blood pressure at 20, 25 minutes, and mean arterial blood pressure at 20 minutes were statistically significant (p<0.05) compared to group F. The mean heart rate was not significant between the groups (p>0.05). Post-operative pain scores were similar at 0, 15 and 30 minutes (p>0.05). Rescue analgesia was needed in 3(10%) patients in each group on arrival in the recovery room.

Hysteroscopy is the gold standard1 for endoscopically performed procedures used for therapeutic and diagnostic purposes to rule out gynaecological pathology.2 Usually it is associated with mild to moderate pain3 and general anaesthesia is the preferred choice by patients, gynaecologists and anaesthesiologists alike due to rapid recovery and because it fulfils the early discharge criteria in day-case surgery. Fentanyl is the preferred narcotic analgesia administered intra-operatively and post-operatively for short surgical procedures,4 although it causes adverse effects, such as sedation, pruritus, and dose-dependent respiratory depression, which might hamper patient’s early discharge in surgical day-case.5 Paracetamol has a good safety profile6 is easily available and is effective for mild to moderate surgical pain.7 Paracetamol is a non-narcotic analgesic,8 introduced intravenously (IV) injectable in 20029 with onset in 5-10 minutes, peak effect at 1 hour and rapidly crossing the blood-brain barrier to produce immediate antinociceptive effect.10,11 Paracetamol has fewer side effects and facilitates patient’s early discharge in surgical day-case surgery.12,13

The current study was planned to compare the effects of IV paracetamol and fentanyl for intra-operative and post-operative analgesia in patients undergoing rigid hysteroscopy.

The prospective randomised control trial (RCT) was conducted at Aga Khan University Hospital (AKUH), Karachi, from October 2016 to June 2017 after approval from the institutional ethics review committee and registered at ClinicalTrials.gov NCT04762147. The sample size calculation was based on the coefficient of variation (CV) and percent changes in mean haemodynamic values from the baseline, by applying the rule of thumb formula14 n = 16 (CV )2/(lnµ0 − lnµ1)2; where CV = σ0/µ0 = σ1/µ1 was  taken biologically 30% and 20% change in mean hemodynamic values, with 80% power and 5% level of significance.

Informed consent was taken from all the participants and they were explained pain assessment through 0-10 visual analogue scale (VAS). They were then randomised into paracetamol group P and fentanyl group F using computer-generated randomisation process on PASS version.11 The randomisation list was exercised by an independent statistician with sequentially numbered sealed opaque envelope method.

All the subjects were pre-medicated with midazolam 7.5 mg one hour pre-surgery. Once the standard monitors covering non-invasive blood pressure (NIBP), electrocardiogram (ECG) and pulse oximetry, were applied, baseline vitals, including the patient’s systolic blood pressure (SBP), diastolic BP (DBP), mean arterial pressure (MAP) and heart rate (HR) were recorded. Anaesthesia technique was standardised in both the groups, including the induction with propofol 2mg/kg, laryngeal mask airway (Ambu® AuraOnceTM) size 3 placement and maintenance of anaesthesia with isoflurane dial concentration at 1.5% in oxygen and nitrous oxide (40:60). Analgesia in group P was paracetamol 15mg/kg administered 15-30 minutes before the start of surgery. In group-F, it was fentanyl 2mcg/kg administered at the induction of anaesthesia with propofol. Intra-operative pain was assessed by changes in HR, SBP, DBP and MAP every 5 minutes from the start of surgical stimulation till the finishing of the procedure. Intra-operative inadequate analgesia was assumed if HR, SBP, DBP and MAP increased by 20% of the baseline values. Fentanyl was the intra-operative rescue analgesia for both the groups and it was planned to administer in 25μg boluses for inadequate analgesia. In the recovery room, post-operative pain was assessed by VAS at 0, 15 and 30 minutes, and IV tramadol 10mg boluses were used for the rescue analgesia. All data was noted on a pre-designed proforma. Data was analysed using SPSS 19. Relevant descriptive statistics, frequencies and percentages were computed for qualitative variables, such as ASA status and severity of pain. Mean±standard deviation (SD) were calculated for age, height, weight and BMI, and they were analysed using independent sample t test. Repeated measure analysis of variance (ANOVA) with post-hoc multiple Bonferroni comparison was used to observe inter-group and intra-group effect on intra-operative mean SBP, DBP, MAP, HR and VAS score. Level of significance was set at p<5%. 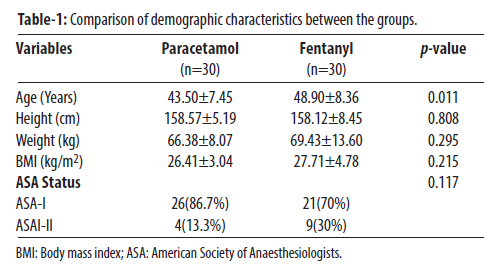 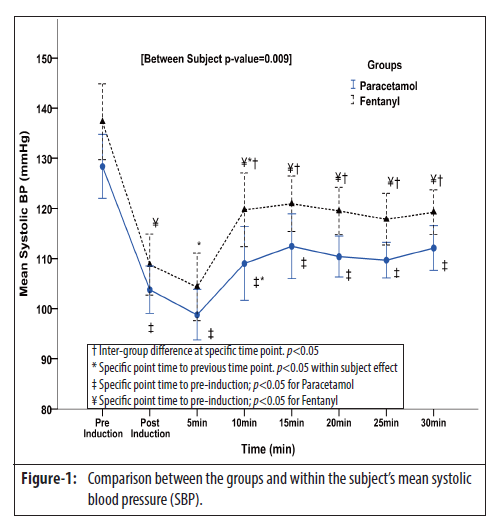 and the same was the case with mean DBP at 20 and 25 minutes compared to group F (Figure 2). 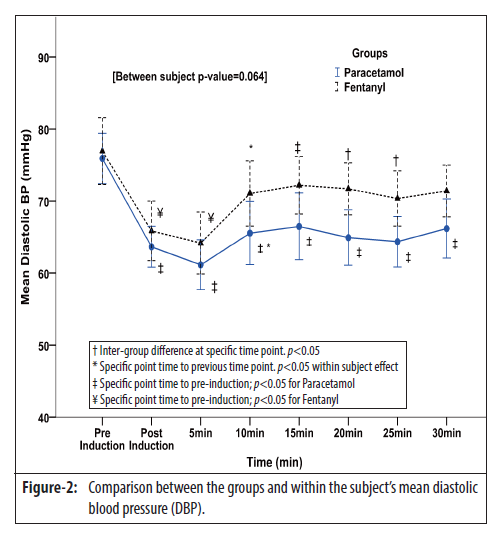 MAP was significant (p<0.05) at 20 minutes in group P compared to group F. The mean HR was statistically non-significant in both the groups (Table 2). 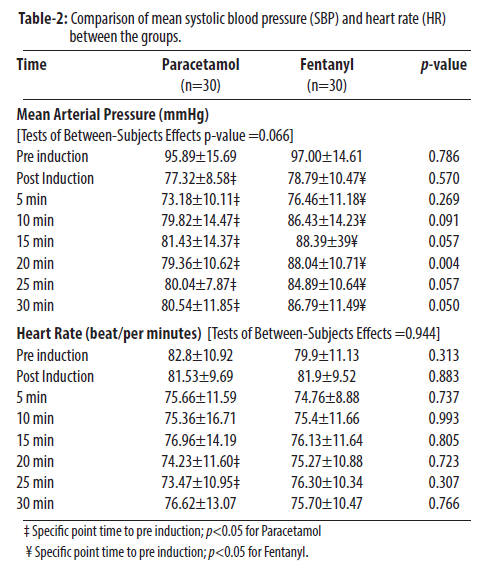 Postoperative VAS scores were similar at 0, 15 and 30 minutes between the groups (p>0.05). VAS scores were non-significant, but on arrival in the recovery room at 0 minute, mild pain with mean VAS 2.8±1.09 and 2.77±1.19 was observed in both groups and 3(10%) patients in each group experienced moderate pain, which was settled with one dose of rescue analgesic. VAS scores at 15 and 30 minutes also showed mild pain in both groups (Figure 3). 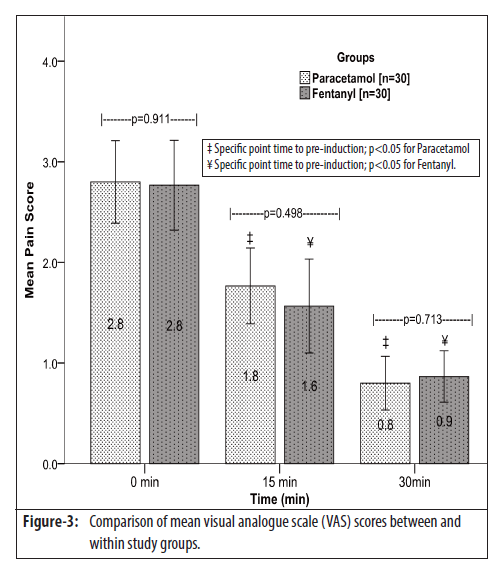 There were no side effects observed for any of the two drugs used.

The major finding of the current study is the comparable efficacy of IV paracetamol and fentanyl for rigid hysteroscopy under general anaesthesia in a day-care setting. Intra-group significance was noted in group P for mean SBP, DBP, MAP values that were lower compared to group F. However, no patient had intra-operative inadequate analgesia in both the groups. Post-operative VAS scores were also statistically non-significant in both the groups. Three patients in each group required post-operative rescue analgesia, while the rest were discharged timely from the recovery room and the surgical day-care bay.

The focal point of the study was the adequacy of narcotic-sparing analgesia for mild and moderate post-surgery pain. The main obstacle of patient’s discharge from day surgery is the poor pain management, which alleviates the patient’s anxiety, morbidity and cost secondary to increased length of stay in hospital.15 Fentanyl is a commonly used narcotic analgesic in day-case surgical procedures, though it caused adverse effects, and has availability issues in lower middle-income countries (LMICs. In contrast, paracetamol is a non-narcotic analgesic which is easily available and is commonly used for the multimodal analgesics in surgical patients. IV paracetamol rapidly crosses through the blood-brain barrier and produces antinociceptive effect within 15-20 minutes.16 One study compared IV paracetamol 1g and morphine 0.1mg/kg for knee arthroscopy in ambulatory settings. The pain score was not significantly different in both the groups, but the patient’s discharge was delayed in the morphine group secondary to the development of narcotic side effects.17 Another study18 compared IV paracetamol and saline placebo for evaluating the opioids-sparing effects of paracetamol in caesarean delivery, and concluded that IV paracetamol group had received remarkably reduced amount of oral narcotics compared to the placebo group. Another study7 comparing paracetamol and fentanyl for dilatation and curettage procedure reported findings similar to the current study with regard to non-significant difference in HR variability between the groups. Mean SBP at 5, 10, 15 and 20 minutes, and DBP at 5 minutes were significantly lower in the fentanyl group compared to the values in the current study, while mean SBP at 10, 15, 20, 25 and 30 minutes and mean DBP at 20, 25 minutes were lower in the paracetamol group. Nevertheless, the study demonstrated equal analgesic efficacy of IV paracetamol and fentanyl for suction evacuation procedures.7 Moreover, one study’s13 findings are almost similar to the current study in terms of analgesic efficacy, procedural pain intensity, haemodynamic variabilities and experimental variables. However, the difference was in the selected procedure, such as dilatation and curettage compared to rigid hysteroscopy in the current study. Another disparity was in the mean age group which was 27.5 years compared to 46 years in the current study.

The current study has a few limitations, such as a small sample size, lack of placebo, short follow-up duration and unblinded status. However, an independent observer in the operating room and in the recovery room was assigned to collect data. Further studies should have a larger sample size along with the inclusion of placebo and appropriate blinding.

IV paracetamol offered analgesic efficacy similar to fentanyl for rigid hysteroscopy in ambulatory surgery. In case of non-availability of narcotic analgesics in LMICs, paracetamol could be used as an alternative for mild to moderate pain post-surgery.

Disclosure: The text is based on an academic thesis.

Conflict of interest:  None.

Source of funding: None.