Objective:  To determine the indications and threshold of haemoglobin levels for packed red blood cell transfusion and its association with outcomes in a paediatric intensive care setting.

Method: The retrospective study was conducted in the paediatric intensive care unit of the Aga Khan University Hospital, Karachi, and comprised medical records of all inpatients with age between 1 month and 16 years who received packed red blood cell transfusions between January and December 2017. Data was retrieved from the hospital database and was analyzed using SPSS 22.

Conclusion: Packed red blood cell transfusion, which is frequently prescribed in intensive care settings, was not found to be associated with favourable outcome.

The transfusion of packed red blood cells (pRBCs) remains a cornerstone in the management of many critically ill children admitted in the paediatric intensive care units (PICUs).1 An approximate 15 and 85 million pRBC units are transfused annually in the United States and worldwide, respectively.2,3 One explanation for the vast use of pRBC transfusion may be the prevalence of anaemia in patients admitted to the PICU. Anaemia has been found to be present in 36.7% to 74% children admitted in PICUs; 15% of them requiring pRBC transfusion.2,3 Furthermore, the causes of anaemia are multi-factorial and include overt or occult bleeding, iatrogenic bleeding, blood loss due to underlying disease or illness severity, and treatment causing bone marrow suppression.2 These anaemic patients have been found to have higher paediatric risk of mortality (PRISM) score, longer length of hospital stay (LOS) and longer duration of mechanical ventilation compared to patients without anaemia.2

The decision to transfuse pRBCs is based on the patient’s haemoglobin (Hb) levels, clinical status, age categories in terms of children, adolescents and infants as well as the clinician’s expert opinion, common practice, and evidence extrapolated from literature.4 Recent guidelines have suggested a threshold of 5gm/dl of Hb for pRBC transfusion, but the level of evidence is very low.5

However, the benefits of pRBC transfusions must be cautiously weighed against its risks.6 There has been increasing evidence showing association of pRBC transfusion with increased mortality, longer PICU stay, longer duration of mechanical ventilation, increased risks of infections and transfusion reactions.1,7 There have also been an increase in immune modulations, haemolysis, transfusion-related acute lung injury (TRALI), alterations in micro-circulations, allergic reactions and development of multi-organ dysfunctions (MODs) in these patients.7,8 A study in 2007 showed that red blood transfusion in critically ill children is independently associated with increased mortality, prolonged duration of mechanical ventilation, infusions of vasoactive agents and PICU stay.9 Higher mortality rates were found among patients with multiple transfusions.9 Patients who received pRBC transfusion were 5 times more likely to die than patients who did not receive pRBC transfusions, and similar conclusions have been made by other studies.10

Hence, although pRBC transfusion is considered a potentially life-saving intervention with the aim of improving adequate oxygen delivery to vital organs in critically ill children, it is not a benign therapy.11 Further prospective, randomised trials and retrospective studies as well recent Transfusion and Anaemia Expertise Initiative (TAXI) thereby suggest using a more conservative pRBC transfusion in most scenarios.12 There has also been a lot of emphasis on haemovigilance and pRBC sparing strategies and goal-directed pRBC transfusion with the sole purpose of increase tissue oxygen delivery.

The current study was planned to determine indications for pRBC transfusion, and its association with outcomes in a paediatric intensive care setting.

The retrospective study was conducted in the PICU of the Aga Khan University Hospital (AKUH), Karachi, and comprised data from January to December 2017, after approval from the institutional ethics review committee. AKUH is a 700-bed tertiary care university hospital with laboratory and blood accredited with the College of American Pathologists (CAP) and supervised by transfusion medicine physicians. The practice of haemovigilance has been implemented a few years ago, using a threshold of Hb 7gm/dl for pRBC in critically ill stable, non-cyanotic patients.13

Data retrieved from the hospital database comprised records of all inpatients with age between 1 month and 16 years who received pRBC transfusions during the study period. Data was excluded for patients weighing <3kg, having postconceptionl age <40 weeks, and those admitted with acute bleeding/haemorrhagic shock.

The primary outcome was indication of pRBC transfusion, pre- and post-transfusion Hb levels, length of mechanical ventilation and PICU stay, and mortality in this group.

Data was analysed using SPSS 22 and results were presented as mean with standard deviation and frequencies with percentages. P value was determined to assess the significance in groups using two sample t test for normally distributed data and Wilcoxon rank sum test for non-normal data. Univariate and multivariate logistic regression was performed to calculate odds ratio (OR) for outcome mortality with LOS, length of mechanical ventilation and with liberal, defined as pre-transfusion Hb >7gm/dl, and conservative RBC transfusion, defined as pre-transfusion Hb <7gm/dl) group. P<0.05 was considered statistically significant. Variables that were found to be significant at 0.25 level of significance were considered for multivariate analysis using stepwise forward model selection method.

During the study period, 600 patients were admitted in PICU, with 210(35%) receiving pRBC transfusion. Of them, 63(30%) did not meet the inclusion criteria and data related to them was excluded. The final sample comprised data of 147(70%) patients. The overall mean age was 67.89±65.8 months and 76(51.7%) of the patients were males.  Mean PRISM score was 11.72±7.86. Admitting diagnosis included sepsis and MODs, respiratory diseases, haematology/ oncology diseases, neurological illnesses and miscellaneous conditions, while indications for transfusion included low Hb, shock and hypoxia (Table 1). 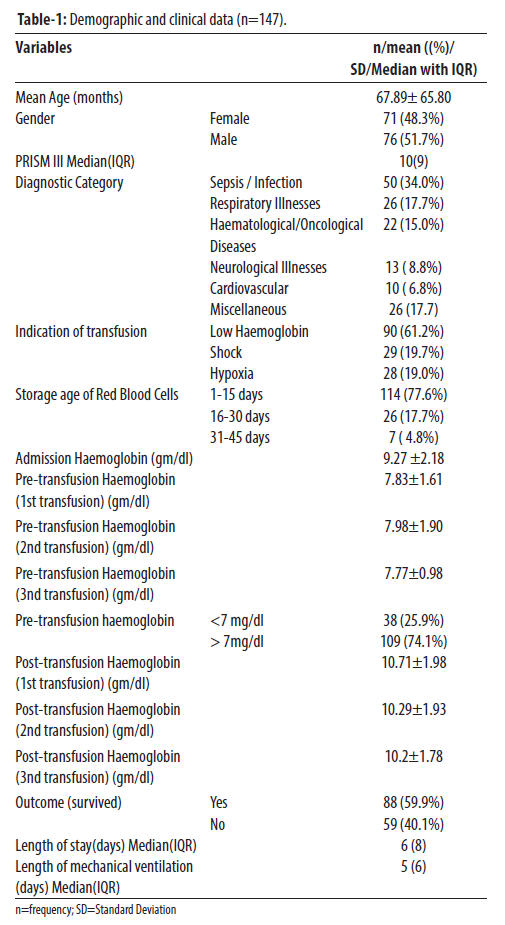 The mean length of stay in the PICU was 8.4±8.087days. Mean values for PRISM score, length of mechanical ventilation and PICU stay among the survivors were significantly different compared to those who expired (Table 2). 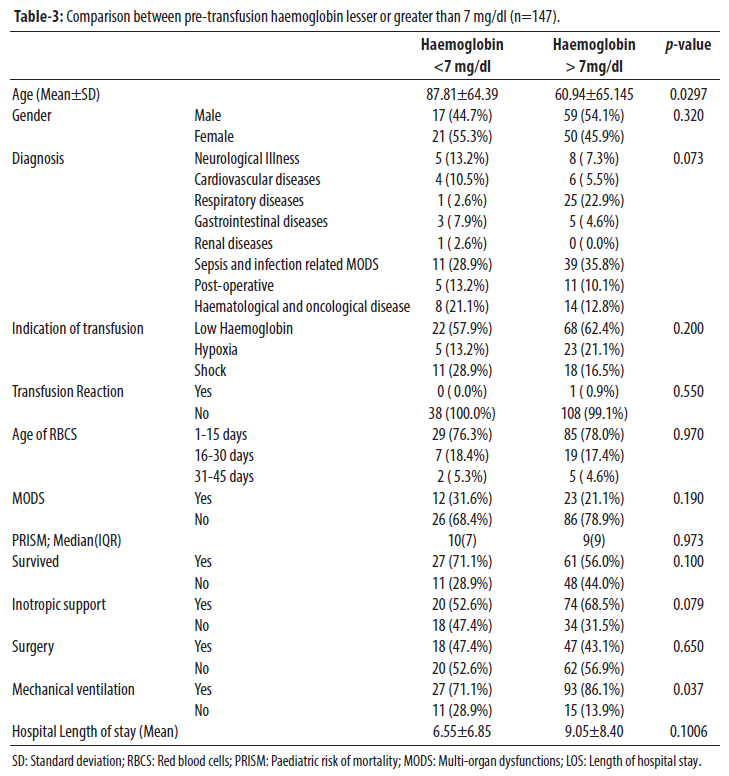 Mean Hb threshold for pRBC transfusion in patients during the current one-year audit was 7.87gm/dl, which is according to global recommendations and the AKUH protocol.13 However, recent transfusion guidelines recommend even lower threshold of 5gm/dl Hb in stable PICU patients.5 As such, there is room for improvement in this aspect. Previous studies also suggested that transfusing pRBCs at lower Hb threshold is better or at least not worse than transfusing pRBCs at higher

thresholds.15-17 Anaemia was the most common indication for blood transfusion in the current study, which is in accordance with literature.4 The incidence of anaemia observed in the current study, however, was significantly higher (55.9%) than the other studies.2,18,19 However, it is of note that these studies were done in developed countries and there is no known comparative data from developing countries. Anaemia in PICU patients is multi-factorial, resulting from underlying illness, pre-existing iron deficiency, frequent laboratory testing etc.2 The post-transfusion Hb level was around 10gm/dl which shows adequate increase and practice of enough minimum volume of transfusion to just bring Hb levels by 2gm/dl above the pre-transfusion levels.13 Another important thing to note is that in a small number of patients (25/147; 17%) post-transfusion mixed venous saturation mean values only improved from 58% to 61%. This means that probably the patients were either in shock or tissue oxygen delivery did not improve much with pRBC transfusion. This is very important point to consider while prescribing pRBC transfusion in PICU as the aim of pRBC transfusion is to improve arterial oxygen content and tissue oxygen delivery.

RBC storage is another important point to consider while transfusing pRBCs as this has also been associated with worse outcomes.20 A study showed that pRBC storage of >14 days was associated with prolonged LOS and development of MODs.20 In a recent randomised controlled trial (RCT), there was no difference in outcomes between patients transfused fresh versus standard stored pRBCs.21 In our study more than two-thirds of patients received pRBC storage life of 15 days or less and we did not find any association of storage life of RBCs with adverse outcomes.

Overall, patients had a mortality of 40% which is a considerably high incidence compared to earlier studies.9,15,17,19 The patients who did not survive had a higher overall PRISM score compared to the survivors. These findings can also be extrapolated from another study in a similar setting which concluded that critically ill children with high PRISM score are also at a higher risk of developing TRALI.22

One study showed mortality was independently associated with the number of transfusions.9 In 2004, a study concluded that the number of RBC units transfused to intensive care patients with anaemia was an independent predictor of a poor outcome.19 However, the current study did not show such an association. Transfusion reaction was also found to be rare (0.7%) among the patients and hence, it could not be concluded if there was a direct relationship between transfusion reactions and mortality.

Furthermore, patients in the current study had an increased length of mechanical ventilation and increased hospital stay. Similar finding was reported by another study in which RBC transfusion was independently associated with longer duration of mechanical ventilation in paediatric patients with acute respiratory syndrome.17 Patients who were transfused with a restrictive strategy had similar or better outcomes and requirement of inotropes as those with liberal transfusion strategies which has also been shown by previous studies.15,16

The current study has certain limitations, including retrospective nature with limited number at a single centre without any control group. Another important aspect that the study did not look at was wastage of blood products and cost implications of excessive or unnecessary pRBC transfusions. Quite often, more pRBC units are provided than required, and the leftover is discarded which can be easily prevented by ordering accurate volume of blood. Despite the limitations, the current study has highlighted some important practice trends in RBC transfusion in AKUH PICU. We continue to work more collaboratively with our haemovigilance team to decrease threshold of pRBC transfusion and use it judiciously in number as well in volume. We also strongly suggest that hospital systems and physicians work with blood bank and make a haemovigilance team to make the use of blood and blood products safe, rationale and judicious. It will be a cost-effective strategy since it will save cost as well as adverse effects of blood products, and make it available for more patients.

Transfusion of pRBC, which is frequently prescribed in PICU settings, was not found to be associated with favourable outcome. It is commonly prescribed with a threshold higher than the recommended Hb levels. Haemovigilance can be of great help in restricting unnecessary use of pRBC in PICUs.

Acknowledgement: We would to thank and acknowledge Dr Hafsa Sohail for help in data entry, management and introduction writing, Dr Shah Ali Ahmed for contribution in data collection and Dr Parveen Usman for her contribution in writing part of this manuscript.

Disclaimer: The Abstract was presented as an oral presentation at the World Congress of Intensive and Critical Care Societies at Melbourne, Australia, in October, 2019.