Method: The retrospective study was conducted at the Department of Neurosurgery，First Affiliated Hospital of Bengbu Medical College, China, and comprised data of patients who presented with ruptured, very small, intracranial aneurysms between March 2015 and May 2019 who were treated using low-profile visualised intraluminal support alone or with stent-assisted coiling. Outcomes from radiology and clinical assessments were obtained related to the time the patients were discharged and their subsequent mid-term examination.

Results: Of the 10 patients, 6(60%) were males and 4(40%) were females. The overall mean age was 47.70±10.22 years (range: 23-62 years). In the sample, 7(70%) patients experienced total occlusion and 3(30%) had nearly complete occlusion. All the 10(100%) patients had uneventful recoveries. Progressive thrombosis to complete occlusion occurred in 3(30%) aneurysms that had initially presented with Raymond grade II. There was no case of stenosis or occlusion.

Very small cerebral aneurysms are usually those with diameters <3mm.1 Because the aneurysm is very small, there is risk associated with direct surgical clipping and endovascular embolisation. Endovascular therapy of small aneurysms has become an optional treatment modality with specialised interventional materials and techniques. Intracranial stents are widely used. The low-profile visualised intraluminal support (LVIS) stent (MicroVention Terumo, Tustin, CA,USA) is a self-expanding, flexible, braided, single-wire, nitinol device, and its safety and effectiveness with respect to treatment of cerebral aneurysms have been described previously.2-4

The retrospective study was conducted at the Department of Neurosurgery, First Affiliated Hospital of Bengbu Medical College, China, and comprised data of patients who presented with ruptured, very small, intracranial aneurysms between March 2015 and May 2019 who were treated using LVIS alone or with SAC. Data was retrieved after approval from the institutional ethics review board from radiology and clinical assessments that had been obtained at the time the patients were discharged and on their subsequent mid-term examination. Data of those having undergone microsurgical clipping was excluded.

Each patient had a follow-up 3-24 months. Those included were diagnosed to have acute subarachnoid haemorrhage (SAH), which was identified by head tomography analysis and consistent with the position of aneurysms identified by computed tomography angiography (CTA). The patients were classified using the Hunt and Hess (H&H) grading system5 on the basis of digital subtraction angiography (DSA).

Endovascular surgeries started with the use of general anaesthesia. Guiding catheter of size 6F was passed into the femoral arterial sheath to access specific regions of the internal carotid artery (ICA), which depended on the aneurysm location. Rotational angiography and three-dimensional (3D) reconstruction was performed to visualise the configuration and shape of each of the aneurysms and the anatomical association between the aneurysm and its parent artery, as well as to ascertain the appropriate stent placement and coiling projection. A Headway 21 microcatheter (MicroVention, Tustin, CA, USA) was placed at the distal aneurysm neck using a 0.014-inch Synchro microwire (Stryker, West Valley City, UT, USA). The tip of the Headway 17 microcatheter was steam-shaped to conform to the anatomy of the specific aneurysm and was positioned in the aneurysmal sac. LVIS was inserted and moved to the head of the Headway 21 microcatheter with an outlet release.

Aneurysm coiling was conducted using coils with sizes and lengths that were appropriate for the specific aneurysm. When the aneurysmal cavity had been filled with one or more coils, the stent was partially deployed and covered the aneurysm neck only in part. Then the stent was fully deployed after the last coil was stabilised and isolated (Figure 1). 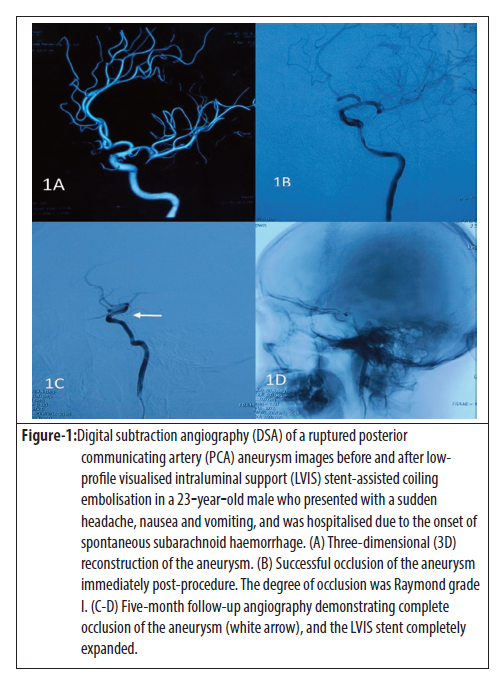 Procedures using semi-deployment of stents were used in all patients in line with literature.6 Two hours prior to surgery, patients were given oral dual anti-platelet therapy comprising 300mg aspirin and 300mg clopidogrel. Starting 24 hours post-surgery, the patients received oral, dual anti-platelet medications 100mg/d aspirin and 75mg/d clopidogrel for six weeks after which clopidogrel was discontinued. The patients continued to take aspirin for two years post-surgery. Twenty-four hours after surgery, routine head computed tomography (CT) scans were done to rule out any post-procedural haemorrhage or brain infarction. All patients were assessed using angiography on follow-up.

One aneurysm was embolised using the stent alone. When the microcatheter was in position, the upper middle cerebral artery trunk was not visible, and it was decided not to insert the coils (Figure 2). 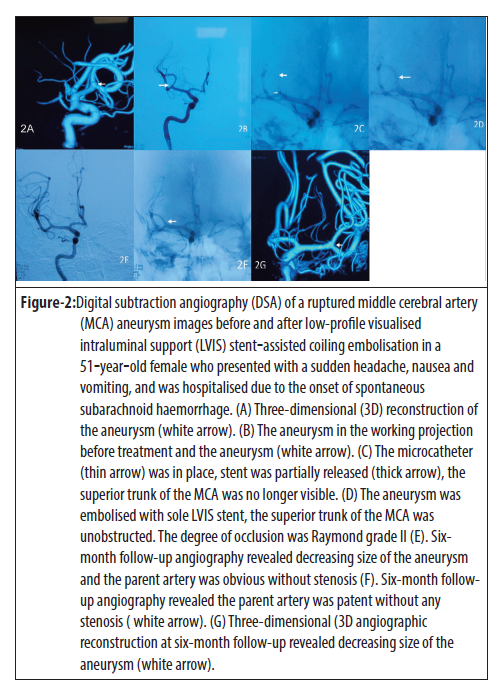 All the 10 patients received endovascular treatment within 0-5 days after the subarachnoid haemorrhage occurred, and no re-rupture was observed. Immediate post-operative angiography revealed that 7(70%) patients had Raymond grade I, and 3(30%) had grade II. Shortly following embolisation, the 3 grade II aneurysms showed increasing thrombosis with full occlusion. No movement or misplacement of stents or coils was observed, and there was no stenosis or occlusion in the parent arteries. On follow-up examination, all 10(100%) patients were found to have recovered without relapse.

Literature indicates that stent-assisted coiling used to treat intracranial aneurysms is both effective and safe.10 The use of SAC to treat cerebral aneurysms is based on the “fence-like” property of stents in which the endothelialisation of stents in blood vessels takes place, which produces the potential flow displacement effect. The microcather is secured using a stent, which avoids the so-called “kick-back” phenomenon. The safety of patients during treatment and the efficacy of coiling in very small intracranial aneurysms have increased through the development of new materials, including smaller coils, improved microcatheters, and steerable soft microguide wires. The use of endovascular coiling to treat very small cerebral aneurysms is reported to have significantly lower risk levels at approximately 3-4%.11

LVIS devices are made from titanium and nickel. They are auto-expanding, flexible devices that are constructed using a single wire. LVIS can be used by a single person with an appropriate delivery mechanism. The LVIS has an exceedingly small cell diameter of 1.0mm, which can boost stream displacement, and guard against the protrusion of the coil. Thus, the risk of escape of the coil is virtually eliminated. Wang et al. examined the cardiovascular effects of using LVIS with stents on intracranial aneurysms and reported that the Pipeline  device produced increased flow reduction compared to LVIS, but the use of LVIS resulted in more flow reduction when compared to the double-Enterprise stent.12 When considering intravascular treatment for aneurysms, LVIS was compared with predicate laser-cut Nitinol microstents, which are based on hypotubes (Neuroform stent; Stryker Neurovascular, Fremont, CA, USA), Enterprise stent (Codman Neurovascular, Raynham, MA, USA), and Solitaire stent (Medtronic Neurovascular, Irvine, CA, USA)). LVIS is constructed as a braided stent that does not just carry out a “fencing function”, but also inhibits coils from protrusion out of the aneurysm into the originating or “parent" artery, and it is also possible to accurately position the LVIS to obtain greater metal surface coverage (LVIS 23%) as well as to create a drum-like extension at the aneurysm neck.13,14

Based on published reports, Flow Diverter (FD) stents are more commonly used than LVIS in patients with large or complex aneurysms due to the haemodynamic effects, as FD stents have a great potential for branch occlusion, which could lead to serious complications.15,16 FD stents have not been used in patients with ruptured aneurysms, but, in clinical practice, some physicians use FD stents to treat large and complex aneurysms, such as subarachnoid haemorrhage.17 In general, LVIS, at an equitable cost, has a broader range of possible applications, not only for anterior circulation aneurysms, but also for posterior circulation aneurysms.

The semi-deployment technique for stents was used in the procedures for all the patients in the current study. When the coils were placed in the aneurysm sac, the microcatheter could be pushed into the parent artery. Thus, it was important to appropriately adjust the microcatheter to avoid this from occurring.

Due to its high metal coverage, we do not assume that the aneurysm sac was densely packed with coils when the stent-assisted procedure was used to treat very small aneurysms. After some time, the follow-up examinations also indicated satisfying results. Lu et al. reported similar views.18 For the one ruptured aneurysm that occurred in the current study, after using the stent semi-deployment, we stopped injecting coils into the sac, because we were not able to visualise the upper portion of the MCA, so the only option was to deploy just one stent.

Initial experience indicated that LVIS devices were both effective and safe to treat very small aneurysms. However, the single-stent technique needs additional research to determine how successful it is in causing aneurysm occlusion.

4.      Fiorella D, Boulos A, Turk AS, Siddiqui AH, Arthur AS, Diaz O, et al, LVIS investigators. The safety and effectiveness of the LVIS stent system for the treatment of wide-necked cerebral aneurysms: final results of the pivotal US LVIS trial. J Neurointerv Surg 2019; 11: 357-61.

13.    Fiorella D, Boulos A, Turk AS, Siddiqui AH, Arthur AS, Diaz O, et al, LVIS investigators. The safety and effectiveness of the LVIS stent system for the treatment of wide-necked cerebral aneurysms: final results of the pivotal US LVIS trial. J Neurointerv Surg 2019; 11: 357-61.