Objective:  To determine the level of serotonin in patients of vasovagal syncope and postural tachycardia syndrome after head-up tilt test.

Method: The cross-sectional analytical study was conducted at the Islamic International Medical College and the Department of Electrophysiology, Armed Forces Institute of Cardiology, Rawalpindi, from April 2017 to March 2018. Group A comprised cases of vasovagal syncope, group B had patients of postural tachycardia syndrome, and group C had healthy controls. Cases were chosen on the basis of history, episodes of syncope and findings of head-up tilt test. After the test, blood samples were taken for hormonal analysis of serotonin using enzyme-linked immunosorbent assay. Data was analysed using SPSS 21.

Conclusion: Serotonin was found to have a significant role in syncope pathophysiology.

Orthostatic intolerance results in the symptoms of syncope or pre-syncope due to cerebral hypoperfusion in case of prolonged standing. The incidence of syncope that cause hospital visit is 3% and 6.2 out of 1000 persons are sufferers of syncope.1

Physiologically, the human body has the ability to accommodate orthostasis by increasing leg and abdominal vessels’ tone, and activation of sympathetic nervous system. If the body fails to do so, this venous pooling progresses towards decreased venous return, and if this venous return is uncompensated, then syncope or pre-syncope-like state occurs.2 Patients who encountered syncope usually complain of dyspnoea, nausea, discomfort, blurred vision, dizziness, cyanosis and loss of consciousness.

The head-up tilt test (HUT) is commonly used to assess syncope symptoms in susceptible people. Patients having complaints indicative of syncope are tilted at 70o angle for 45-60 minutes to see if symptoms of syncope appear. It is usually applied to determine neuro-cardiovascular response due to orthostasis in patients who experience syncope or symptoms of syncope.3

Vasovagal, or reflex, syncope occurs when the vascular tone is not maintained by the autonomic nervous system in the lower dependent regions of the body in the standing position.4

Postural tachycardia syndrome (POTS) is another manifestation of orthostatic intolerance. These patients experience tachycardia while standing, instead of bradycardia, and hypotension as in the case of VVS. Usually, HR >120 beats per minute is seen during the 10 minutes of upright standing or tilt without hypertension. POTS is more common in females compared to males.7

It has been anticipated that variation in the level of different neuroendocrine hormones in the blood could cause progression and manifestation of syncope.

Serotonin (5-hydroxytryptamine [HT]) is a biogenic monoamine neurotransmitter which is synthesised peripherally in enterochromafin cells in the gastrointestinal tract (GIT), centrally in neurons from L tryptophan in substantial concentrations in neurons of central nervous system (CNS) and in platelet granules.11 Serotonin has a role in vascular dynamics ranging from vascular resistance and BP control in regulation of blood coagulation and platelet aggregation.12 Serotonin mediates its action through seven different forms of receptors (5-HT1 to 5-HT7), scattered throughout the body.13 In addition to peripheral serotonin receptors, central serotonin receptors have a role in the sympathetic withdrawal, thus causing hypotension and bradycardia.

The cross-sectional analytical study was conducted at the Islamic International Medical College (IIMC) and the Department of Electrophysiology, Armed Forces Institute of Cardiology (AFIC), Rawalpindi, from April 2017 to March 2018. After approval from the ethics review committess of the two institutions, the sample size was calculated using the World health Organisation (WHO) calculator.14 Those included were VVS patients in group A, POTS patients in group B, and healthy controls in group C. The patients were selected on the base of history, episodes of syncope and HUT results to differentiate between VVS and POTS. After taking the written informed consent from the patients, blood samples were drawn from the median cubital vein after HUT test which were centrifuged, and serum was analysed for serotonin hormone using the enzyme-linked immunosorbent assay (ELISA) method.

Data was analysed using SPSS 21. Data was expressed as mean±standard deviation. Analysis of variance (ANOVA) was also applied. P˂0.05 was taken as significant.

Serotonin level was significantly greater in group B compared to two other groups(Figure). 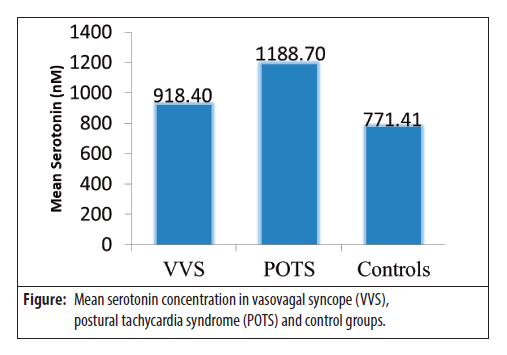 Patients of syncope are intolerant to orthostatic stresses that result in the gathering of blood in vascular beds of legs, abdomen and pelvis because of the gravitational effect. This pooling of venous blood leads to decrease in venous return, cardiac output and stroke volume and moves toward cerebral hypoperfusion and syncope.15

On HUT, various patterns of cardiovascular responses are observed on pathophysiological basis, showing that syncope could be neurocardiogenic, also known as reflex syncope, cardiogenic and orthostatic.16 Among these, neurocardiogenic syncope, or VVS, is common in which momentary and self-resolving unconsciousness occurs after bradycardia and vasodilation.17

Some neuroendocrine hormones have a role in VVS and POTS due to orthostatic intolerance. It is believed that hormones like catecholamines (epinephrine, non-epinephrine), angiotensin I and II, serotonin, cortisol, and renin are responsible for the maintenance and monitoring of vascular tone, HR and BP in the body.18

Serotonin is an amine derived from tryptophan amino acid, and it was previously thought that it is only a vasoconstrictor, but latter its role was established as neurotransmitter in CNS that modulates behaviour, mood and sleep.19

A study found that serotonin acts as vasoconstrictor and vasodilator subject to the type of receptors present in the vessel wall, tissues and smooth muscle cells.12 One study found that serotonin mediated its effects by acting upon different subset of serotonin receptors, ranging from 5-HT1 to 5-HT7 located on smooth muscle cells and vascular endothelial cells, and regulates vasoconstriction and vasodilatation through these receptors which were found to have some role in syncope by undergoing constriction or relaxation depending upon the types of receptors on the vessel wall which evaluates the role of serotonin in syncope.20

A study estimated cortisol and prolactin concentration in syncope patients as an indicator of augmented serotonergic activity during HUT. The level of serotonin cannot be measured directly in the CNS, whereas increased secretion of prolactin and cortisol occurs due to increased concentration of serotonin in the CNS. Increased levels of cortisol and prolactin were found in patients experiencing syncope, which indicated increased serotonergic activity in the brain.18 The present study also saw significant rise in serotonin levels in VVS patients.

One study evaluated the relation of serotonin with POTS along with bleeding tendencies.21 They evaluated delta granules storage pool deficiency (d-SPD) in POTS cases having bleeding tendencies. In d-SPD, serotonin rushes into the blood serum, resulting in increased levels in these patients. The current study also found raised levels of serotonin in the blood serum, indicating that there must be some contribution of serotonin hormone in the pathogenesis of POTS as it causes vasodilation and lowers the venous return to the heart as well as down-regulates the receptors that causes vasoconstriction, thus exacerbating the symptoms of POTS.

One study on the effect of central serotonergic activity in the monitoring of HR and BP reported that variation in central serotonin levels may cause pathophysiology of various states like neurocardiogenic syncope, orthostatic hypotension and carotid sinus hypersensitivity. Higher concentration of serotonin causes lowering of sympathetic control that results in hypotension and bradycardia leading to syncope.22

A study on the concentration of serotonin at seven instances during HUT used high performance liquid chromatography (HPLC) with electrochemical calorimetric detector, and found serotonin level to be higher with syncope, but the results were statistically non-significant.23

Another study11 discussed the contribution of peripheral serotonergic activity in the progression of VVS. The level of serotonin in the earlyl stage of HUT was less compared to during or after the test in positive syncope cases. In the current study also, the level of serotonin was significantly high at the end of HUT.

Since the current study was conducted with limited resources, it has a few limitaions, like not dealing with hormonal receptors.

The findings of the study suggest that studies should also be performed at the receptor level which may help ascertain the pathophysiology, diagnosis and treatment of syncope patients.

Serotonin was found to be involved in the pathogenesis of VVS and POTS.

Disclaimer: The text is based on an M.Phil thesis.