Early sexual debut is common in Nigeria and increases HIV risk among adolescents. About 152,000 adolescents are living with HIV. Lack of knowledge and appropriate sexual reproductive health services are some factors responsible. This paper estimated the cost of secondary school-based HIV/AIDS intervention for schools in Enugu State, Nigeria. The rationale for estimation is to avoid unaffordable and ineffective interventions. The cost was estimated between March to October 2019 for schools in urban and rural areas with population of 1595 students. The cost estimation was aided through UNAID proposed guideline. The estimation was done by classifying intervention into cost of training, cost of services and cost of commodities. The cost was estimated at $5954. The estimated cost in urban is lesser than that of rural. This estimated cost of intervention may inform stakeholders with the knowledge of cost implications to avoid unaffordable school-based HIV interventions in Enugu State, Nigeria.

Sexual and reproductive health of adolescents has always been an issue of concern in global public health and has become a challenge. Adolescence is a critical stage of human development, when at this stage children are becoming sexually active.1 Adolescents, at this stage, are exposed to the affluence of unrestricted information through internet, mobile phone technology, and electronic media.1 They are exploratory and often indulge in risky sexual practices for the reason of experimentation and peer influence. Adolescents are vulnerable to Sexually Transmitted Diseases (STDs), and this constitutes a public health challenge in Nigeria.2

In 2019, 152,000 adolescents (between ages 10-19) were living with HIV, making up 8% of the total number of people with HIV in Nigeria.3 Several factors increase HIV vulnerability among young people, including lack of knowledge and appropriate sexual reproductive health services.4 According to the National Bureau of Statistics (NBS),5 early sexual debut is common in Nigeria, with 15% of girls and 4% of boys having sex prior to age 15 years. This increases HIV risk among this group as often the virus is passed from older men to younger women.6 Despite their elevated risk, reports showed that few adolescents test for HIV regularly.6 Furthermore, Nigeria has the second-largest HIV epidemic in the world (National Agency for the Control of AIDS).7 In 2017, 3.1 million people were living with HIV in Nigeria.8 However, in 2019, a recently published Nigeria HIV/AIDS Indicator and Impact Survey,9 one of the largest population-based HIV/AIDS household surveys ever conducted, found the prevalence to be just 1.9million, which is 1.4% of the total population with adolescents contributing 8% of people living with HIV.3 The apparent decline has been attributed to better surveillance.

Adolescents' vulnerability to HIV is not only because of being sexually active in schools, but also many sexual contacts among them are unprotected.10 Another reason for their vulnerability to HIV is lack of sex education, including education on prevention of STDs.11 Consistently, studies have attributed adolescents’ high-risk sexual behaviours to poor in-depth knowledge about sexual health risks and low self-risk perception towards HIV/AIDS.12 These reasons necessitate school health education initiatives to increase level of knowledge, influence, attitudes and encourage safe sexual practices among adolescents. School-based health education is used to increase HIV-related knowledge and shape safer sexual behaviours to help prevent new infections among this vulnerable group.13 It gives an opportunity to reach large numbers of young people in an environment already equipped to facilitate educational lessons and group learning.14

The term school-based, educational intervention means any intervention which is aimed at children (between ages 5 and 18) and mainly delivered in an educational setting (such as a school). It helps to improve students’ health literacy, behaviours, and achievements. School-based health promotion could be particularly valuable in developing countries facing challenges of low health and a high burden of diseases.15 Another reason for necessity of school-based intervention is that researchers have identified lack of knowledge as one of the leading issues to the increase in HIV vulnerability among secondary school students.4,8,11

Cost estimation in this study followed a step by step guideline according to UNAID costing guideline.22 The guideline is as follows; prioritizing target population; setting coverage target for reaching a specific sub-population; choosing and designing effective intervention packages and activities for target population; computing cost of intervention as unit costs; estimating total resource needs based on size of sub-population; examining impact of planned interventions on incidence and prevalence of HIV; optimizing strategic allocation of resources (re-examining); and finally, resource gap. This study was limited to cost estimation; hence, it did not go beyond estimating the total cost of resources needed for intervention into examining impact of intervention prevalence of HIV, optimizing strategic allocation and resources gap as contained in the guideline developed by UNAID.22

The estimated cost of service delivery was possible with the information acquired through pilot study. In the pilot study, a questionnaire instrument was developed by researchers and titled HIV cost estimation questionnaire. The instrument contained different ranges of cost for different intervention personnel and related services and materials. The instrument was administered to 30 health workers, which included; ten (10) medical doctors, five (5) health educators, five (5) lab attendants, five (5) health counselors and five (5) outreach workers who were also health workers. Their responses were analyzed using a statistical mean. The result was used for school-based cost estimation of HIV intervention. Other information regarding stationary, transportation, and cost of awareness was informed by the local market in the study area. The estimated cost was analyzed using percentages and pie chart. The explicit cost was estimated in a spreadsheet shown in the results section. 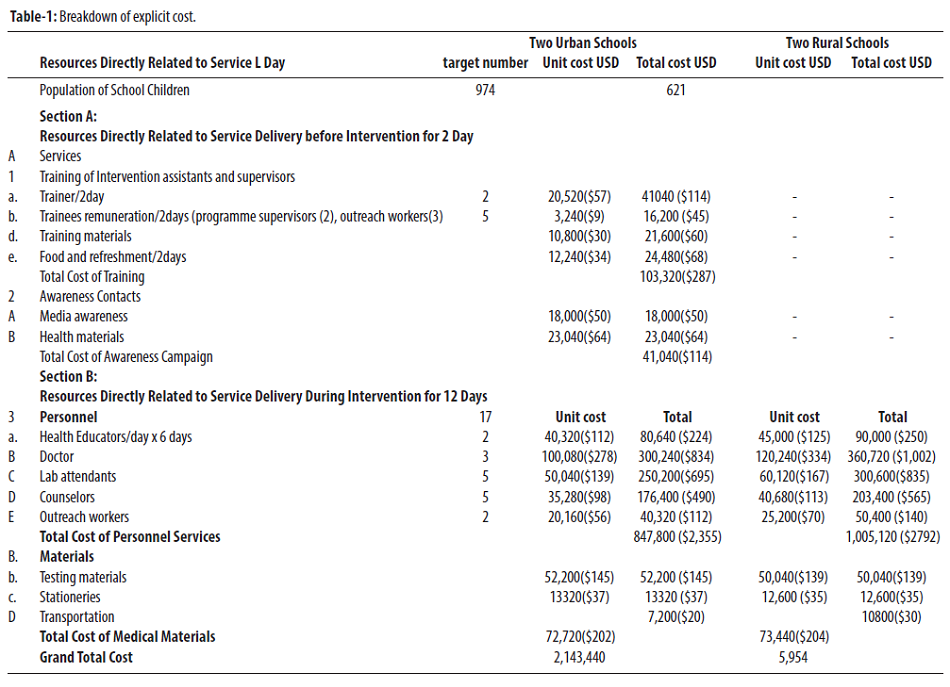 Table 1 is a spreadsheet structure containing a simple estimation module for different essential elements of intervention, for example, training, light refreshment, remuneration for health workers, laboratory materials, stationery and cost of transportation. The estimation was done for rural and urban areas with a total population of 621 and 974 students respectively. The total estimated cost (TEC) was 5,954USD. The total estimated cost for training (TECT) before intervention was $287. This entails cost of allowance for two trainers $114, cost estimate for allowance of trainees $45, training materials and refreshment $128. The awareness contact estimated cost (ACEC) was $50. The training was proposed to last for 2days with an estimate of 14hours. Five (5) trainees consisted of outreach workers who were expected to work as supervisors of intervention, take clinical notes, and carry out interviews when necessary on recipients of intervention. The trainers are health educators from health centers and hospitals. The refreshment is proposed to be given intermittently in the process of training. Hence, before and during intervention, awareness wouldbe created through phone calls to the schools, advertising intervention through local media and using posters on HIV and preventive measures and need for school-based interventions. The cost of awareness creation was determined through visitation of local media stations and communication centers within study area.

From the spreadsheet, cost was also estimated for other materials, which included test material, stationary and transportation, and their percentage cost was$145/ $139; $37/$35; and $20/$30 for both urban and rural schools, respectively. Hence, the total estimated cost of this proposed intervention was$3,696. The cost estimation on medical test material, stationary and transportation were informed through the information gathered from lab attendants from medical centers around, local markets, and from locations of the intervention, respectively. 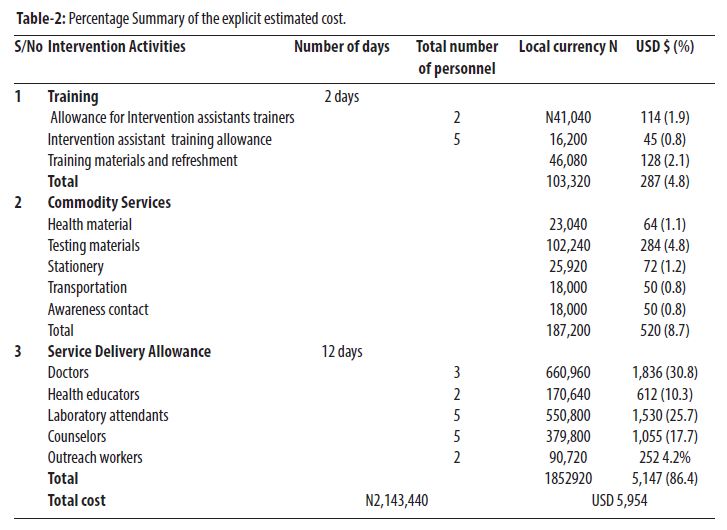 Table 2 shows the percentage analysis of estimated cost. The analysis was classified into: training; commodity services and service delivery. For training, 4.8% of TEC (total estimated cost) was estimated, which included 1.9% allowance for intervention assistant trainees; 0.8% for intervention assistant training allowance and 2.1% for training materials and refreshment. For commodity services, the cost estimated is 86.4% of TEC. This entailed 1.1% for health material distribution. Testing material had 4.8%, stationary 1.2%, transportation 0.8% and awareness contact 0.8%. For service delivery allowance, 4.2% of TEC was estimated, which comprised 30.8% for doctors, 10.3% for health educators, 25.7% for laboratory attendants, 17.7% for counselors and 4.2% for outreach workers. 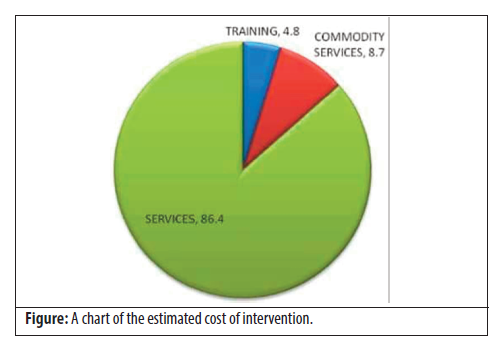 Figure shows at a glance the estimated cost of various classifications of intervention activities. From the pie chart, it could be seen that bulk of the cost is on services followed by commodity services and lastly cost related to training.

15.    Mukamana O, Johri M. What is known about school-based interventions for health promotion and their impact in developing countries? A scoping review of the literature. Health Educ Res 2016; 31: 587-602