Method: The quasi-experimental study was conducted at the Dow University of Health Sciences, and the Dr. Ruth Pfau Civil Hospital, Karachi, from January to July 2018, and comprised nurses from two tertiary care hospitals.  A single educational session lasting 90-120-minute was conducted for all the subjects. Knowledge level was tested at baseline and post-intervention using the Comprehensive Breast Cancer Knowledge Test questionnaire. Data was analysed using SPSS 20.

Globally, breast cancer (BC) is the second most common cancer, and fifth primary cause of mortality. As  noted by the Global Cancer Observatory (GLOBOCAN), by 2030 estimated BC cases  will be 2.4 million in women.1 According to Inclusive Cancer Statistics 2016, the incidences of BC was 246,660 and mortality was 40,450 in women and it rose up in 2017  to 252,71.2 A study in Karachi reported BC incidence of 34.8%.3 According to the World Health Organisation (WHO) in 2017, the incidence of BC had increased in developed countries due to luxurious lifestyle and proper registry system, while in the developing countries the incidence has risen due to cultural trends and  late reporting  to healthcare providers.4

Millions of people all over the world are living with   cultural   myths about BC due to ambiguous information.5 International and national BC organisations, like the American Cancer Society  and the Korean Breast Cancer Society, have emphasised on BC awareness sessions to all, including the healthcare professionals, non-health care professionals and housewives etc.6 Furthermore, studies have shown that basic goal of conducting educational session of BC is to create awareness among females for early identification and prevention of BC so that BC morbidity and mortality could be overcome.7 Pakistan has a variety of cultures in which women are reluctant to discuss issues of breast with partners, and are more comfortable with female nurses in sharing such problems. Hence, nurses’ knowledge must be updated related to BC which might be useful in educating women about BC.8

Many descriptive studies have been conducted in countries like Nigeria,9 Bangladesh,10 India,11 Iran12 and Pakistan,13 showing that that nurses’ knowledge of BC was low regarding signs and symptoms, risk factors and cultural myths. Their knowledge level regarding BC needs to be updated in order to educate women on a mass scale.9-15 Experimental studies were conducted among nurses in Iraq and Turkey, showing that the knowledge of nurses was low before the awareness session which increased after post-session.16 To the best of our knowledge, no interventional study has been done in Pakistan which could reveal the effect of an educational session on nurses’ knowledge related to BC. The current study was planned to assess the effect of a nursing educational session on nurses’ BC knowledge level.

The quasi-experimental study was conducted at the Dow University of Health Sciences (DUHS), and the Dr. Ruth Pfau Civil Hospital, Karachi (CHK), from January to July 2018. After approval from the DUHS ethics review board, the sample size was calculated using the WHO software,17 while taking the mean total BC knowledge score of primary healthcare nurses before education as 58.51±15.63 and post-intervention as 75.96±9.5318 and keeping confidence level at 95%, power of the test 80%. To account for possible dropouts, the sample size was inflated by 20%. The sample was raised using consecutive sampling technique.

Those included were female nurses registered with the Pakistan Nursing Council (PNC), having minimum qualification of three-year diploma or diploma in midwifery. Those who had recently participated in any BC awareness session were excluded.

After taking informed consent from the subjects, demographic data was noted on a proforma. Further data at baseline was collected using the self-administered modified questionnaire of the Comprehensive Breast Cancer Knowledge Test (CBCKT) with an alpha coefficient of 0.71.19 In terms of established validity and reliability, Kuder-Richardson 20 (KR-20) test was used to check the reliability of the modified questionnaire. Alpha co-efficient was 0.76 which was obtained after a pilot study of 10% of the same population. The CBCKT questionnaire consisted of 30 items and three domains of knowledge which were facts, risk factors with causation, and myths about BC. These domains, or categories of knowledge, were developed on the basis of score. Facts, risk factors with causation, and myths about BC had 8 items (max score = 8), 8 items (max score = 16) and 14 items (max score = 42) respectively. Participants knowledge was calculated on the basis of percentage0-50% = poor, 51-75% = fair, 76-87% = good, and 87-100% = excellent.

The first phase of the study comprised enrolment and pre-test assessment. In the second phase, an educational session lasting 90-120 minutes was conducted, while in the third phase, a post-test assessment was done after one month using the same questionnaire as was used at the baseline. The teaching session included PowerPoint presentations and a booklet having basic knowledge related to signs and symptoms, risk factors, causes, early assessment, diagnoses and cultural myths of BC.

Data was analysed using SPSS 20. Since the data was not normally distributed, non-parametric tests were used. Wilcoxon test was used to assess the difference in pre- and post-test knowledge. Quantitative variables were expressed as mean and standard deviation, while qualitative variables were expressed as frequencies and percentages. P<0.05 was considered statistically significant. 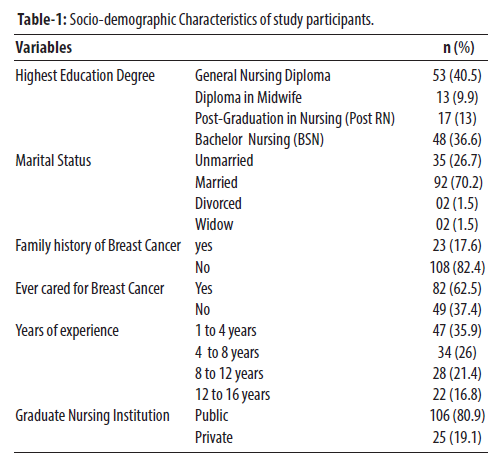 In the pretest, most participants showed poor knowledge in all three components of knowledge (Table 2). 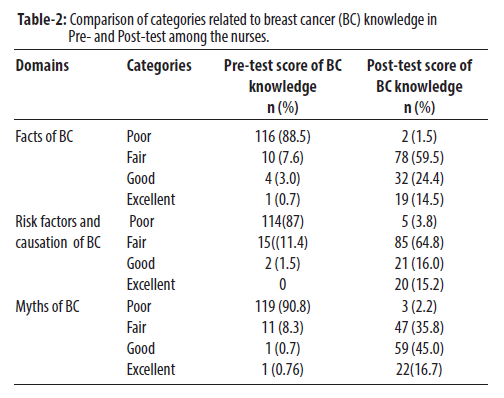 There was significant difference between pretest and posttest scores in all the three components of BC knowledge (Table 3).

A single educational session in the current study had a constructive effect on nurses’ BC knowledge, which is in line with earlier findings.20 Descriptive studies in Pakistan, India, Iran and Saudi Arabia have shown inadequate knowledge of BC in women because of vague information provided by healthcare providers.12,21 In contrast, descriptive studies in Turkey and Nepal exhibited that women had adequate knowledge about BC although there was further need of educational programmes for updating their knowledge according to the recommendations of the American Cancer Society.11,22 These studies suggested that a teaching session is required for improving BC knowledge of nurses.23

After attending the educational session, the participants’ knowledge improved significantly in the current study. The findings related to the myths domain in the current study is unique. Knowledge related to risk factors and BC causation also improved significantly, which was consistent with studies done in Egypt,24 Kenya25 and Colombia26 and inconsistent with a study done in the United Kingdom.27 The current study found the lowest difference in the domain of facts, while in studies done in the United Kingdom and Kenya, this was the domain that showed the highest difference25.

Furthermore, the current study categorised BC knowledge as poor, fair, good and excellent. At baseline, the highest percentage of participants was in the poor category in all the three domains. After the educational session, the knowledge of participants improved in a way that only lower percentage of participants remained in the poor category. This is core evidence of successful educational session. Experimental studies in Turkey, South Africa, India and Iraq did not assess BC knowledge in terms of categories.11,12 Descriptive studies in India and Malaysia emphasised the need of an awareness session regarding BC to increase the knowledge of the nurses.28

Majority of the participants in the current study were diploma holders, married, having no BC history, having 1-4 years of experience, and having completed graduation from public-sector institutions. Similar and contrasting11,29,30 findings have been reported in earlier studies.

Awareness is fundamental effort which can overcome the risk of having BC by early identification and through changing lifestyles. Also, it is a basic right of women to overcome BC adversity.31 Studies suggested that BC awareness among nurses should not be neglected as their role in educating women about BC, how to identify BC in early stages, its  risk factors, and causation of BC is very important.8 A study recommended that awareness sessions among nurses must be conducted.21

In terms of limitations, nurses improve their knowledge after any academic session, and the current study failed to touch the element of knowledge retention. Another limitation is that conversion of knowledge into practice was not measured.

Nurses attending a single educational session about BC showed a significant improvement in all the three domains of knowledge.