Conclusion: The genetic variant of N-acetyltransferase 2 rs1208 was found to be significantly associated with oral cancer progression and development of associated risk factors.

Oral cancer (OC), or mouth cancer, is a subtype of head and neck cancer developing a tumour in the oral cavity.1 Approximately at around 3% of all malignancies, OC occurrence worldwide is around 500,000 cases annually,2 making it the second leading cause of death  in both men and women.3 In India and Pakistan, 8-10% (1/3rd) of all cancers occur in the oral cavity.4-6 OC is more frequent after age 40, peaking at 60 years. It is more lethal in males than females with a ratio of 2:1.7-9 There is a need to develop therapeutic strategies to cope with this situation.

The N-acetyltransferase 2 (NAT2) metabolising gene is present on chromosome 8p21 region10 that contains two exons with one long intron of about 8.6 kb. Exon 1 is very short (100 bp), and the entire protein coding region is contained within the 870-bp exon 2. NAT2 alleles having high and low activities are associated with a variety of malignancies.11,12 The NAT2 gene is a well-known phase-11 xenobiotic metabolising enzyme (XME) and polymorphism of XME genes is strongly associated with OC risk.13 OC is a multi-factorial disease having interaction with various genetic and environmental factors.14 The single nucleotide polymorphism (SNP) rs1208 of NAT2 gene mutates A803G and Lys268Arg with the allele origin of G/A, with A being the ancestral allele.10 This SNP was observed in rapid acetylators, and the risk allele for it is G.15 A830G is not associated with a reduction in O-and N- acetyltransferase catalytic activity and also not in protein expression and stability.

NAT2 is a highly polymorphic enzyme affecting the activity of the enzyme and differentiating the individuals as rapid, intermediate and slow acetylators.12,16-19 The frequency of OC is getting higher due to population growth, aging and irrational lifestyle.20 In Asian countries, tobacco is extensively used, and about 90% OC cases are caused by tobacco and its products.5,21 Diet lacking in fruits and vegetables, antioxidants, vitamins, minerals, and comprising processed meat is carcinogenic, leading to OC.22,23

The current study was planned to find the genetic polymorphisms of OC associated with phenotypic and genotypic variations in a specific region.

The case-control study was conducted from November 2017 to April 2018 after approval from the Institute of Molecular Biology and Biotechnology, Bahauddin Zakariya University (BZU), Multan, Pakistan, and comprised oral cancer patients and healthy controls. The sample size and statistical analysis was calculated using a MedCalc for Windows, version 19.6.4 (MedCalc Software, Ostend, Belgium).24 SNP was analysed with an odds ratio (OR) 2 at 95% confidence interval (CI), 5% minor allele frequency with case-control ration 0.909 ratio, and error rate in an allelic test 6.9%. The sample size for a common SNP was significant (p<0.05). The sample was raised using opportunity sampling technique.

The subjects were categorised into control Group 1 having unaffected, normal and healthy individuals without any clinical signs and symptoms of OC, and patient Group 2 having clinically-diagnosed OC patients.

After taking consent, data was collected related to age, smoking, and consumption of naswar, betel leaves and nuts using the standard interviewer-administered questionnaire.

Genotypic frequencies of NAT2 rs1208 with OC were calculated. The allelic frequency of the genetic variant of NAT2 rs1208 was calculated using Hardy-Weinberg equilibrium for the wild type allele, and mutant type allele in both the cases and the controls. Statistically, values were analysed using the chi-square goodness of fit test with a degree of freedom to study the associated risk factors with genetic variants and OC. OR, standard error (SE) and 95%CI were measured using the online MedCalc statistical calculator with a significant cut-off value p=0.05.25.26 Hardy Weinberg equilibrium (HWE) was used to calculate the frequency of NAT2 variations either for mutant or wild type alleles. 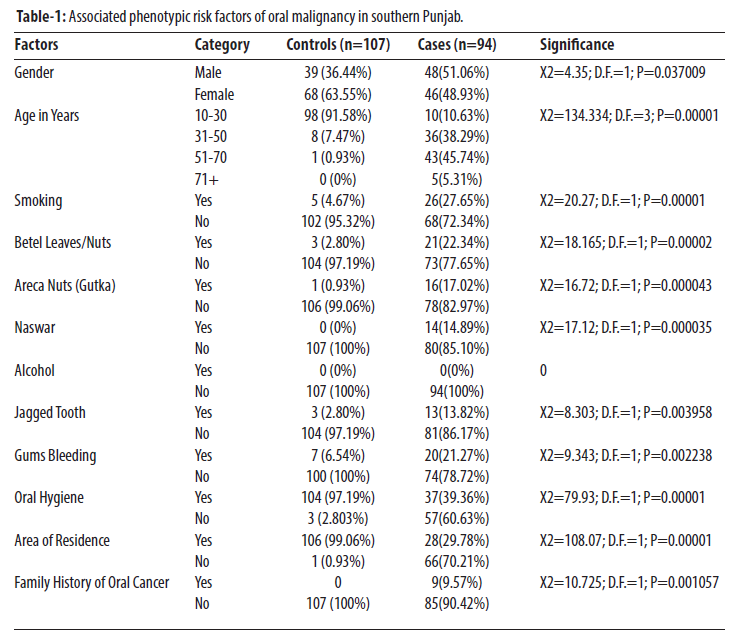 Smoking increased OC risk 7-fold, while betel leaf and naswar usage were not found to be significant (Table 2). 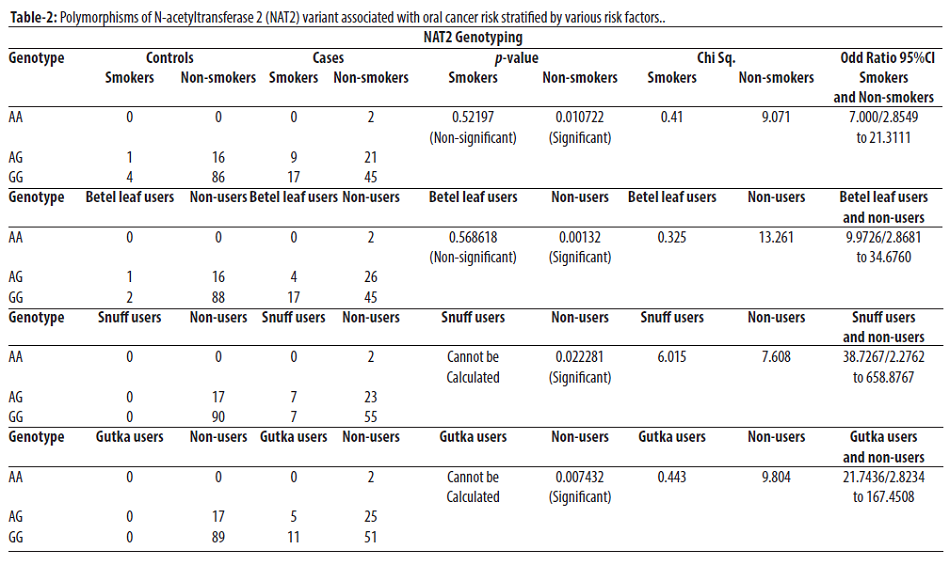 Oral cancer is a multi-factorial disease having interaction with various genetic and environmental factors.14 The current study analysed SNP of NAT2 associated with OC in southern Punjab, and found the association of genetic polymorphisms of NAT2 with various demographic risk factors. The findings of the current study are in line with literature.2,7,19,27

We have observed the distribution of NAT2 alleles in population of the Southern Punjab and accounted for most NATs in other nations.28 In control and cancer patients, risk factors including gender, age, smokers, chewers, and others have not been similar. It has been reported that gender is an important factor and males have been found to be more vulnerable than females to disease development (p=0.037009).2,7 This study shows the association of phenotypes with the high risk of oral cancer. The interaction between the NAT1 and NAT2 polymorphisms with these phenotypes is probably due to the role of NATs in nitrosamine metabolism as the most significant carcinogen in the use of tobacco and other components of the molecules.29 The frequencies of genotypes and phenotypes are different in our population, however the distribution of normal, rapid and slow acetylators in the control population was found similar in African population, but it was different from Japanese and Turkish populations.30,31 NAT2 alleles having high and low activities are associated with a variety of malignancies. This gene has SNPs affecting the activity of the enzyme and thus differentiating the individuals as rapid, intermediate, and slow acetylators.11,12 It has been shown that the homozygous ancestral allele is more prevalent in cases as compared to the control-subjects.7 We observed significant outcomes about the homozygous distorted G allele. It is dominant in both controls and cases. A recent study among a Chinese population found a CC genotype of NAT2 rs1565684 T>C polymorphism indicating significantly higher risk of oral cancer.32 We found statistically meaningful association of oral cancer with NAT2 polymorphism.

Genetic variant of NAT2 rs1208 was found to be significantly associated with OC. Genetic and environmental risk factors, like smoking tobacco, gender, aging and family history were major risk factors.

Conflict of interest: The person who signed the ethical review statement is also a co-author.