Objective: To determine the level of cardiovascular fitness in young adults, and to find the relationship of maximum oxygen uptake with body mass index and physical activity.

In today’s world, cardiovascular fitness has become a rising concern with the sudden but significant fall in physical activity.1 Heart diseases have been found to be the leading cause of mortality, according to Centres for Disease Control and Prevention (DCD) and the World Health Organization, accounting for 17 million deaths worldwide annually.2,3 Low cardiovascular fitness accounts for an estimated 12% of all deaths in the United States.1 Lifestyle modification and risk factor reduction can reduce this increasing death rate due to cardiovascular diseases.1

The WHO has also reported that around 3.2 billion deaths each year are attributed to lack of physical activity.4 The level of maximal oxygen uptake (VO2max) serves as a suitable measurement of the level of physical exercise and cardiovascular endurance in an individual. VO2max is defined as the maximum level of oxygen delivered and utilised during intense exercise.3

Childhood and adolescence, which serve as a crucial base towards the development of a young adult as in these phases not only significant psychological and physiological developments take place, but baseline determinants of lifestyle and behaviour are also established. It has also been reported that approximately 32% Americans are obese, and a vast majority of US adults do not engage in regular physical activity.6 This is due to the fact that lack of physical activity induces obesity, and obesity further discourages activity. This never-ending relationship between obesity and physical activity may lead to worsened cardiorespiratory endurance.

Adults who were overweight when they were children have higher levels of lipoproteins, blood pressure and fasting insulin levels and, thus, are at increased risk for cardiovascular disease compared to adults who were slim as children.7

Several studies have listed top five risk factors leading to death as high blood pressure (BP), smoking, high blood glucose and obesity, and all these are connected with physical inactivity.1,4 Alongside the increase in these risk factors, there is decline in many physiological systems owing to ageing, in addition to loss of muscle mass, decline in balance ability, reduction in muscle strength and endurance and decline in cognitive performance. All these have a significant impact on one’s functional independence.6

The cross-sectional study was conducted from January to June 2019 at two private universities in Islamabad, Pakistan. After approval from the ethics review board of Shifa International Hospital, Islamabad, the sample size was calculated using Rao software while assuming the young adult population to be 864,099 with a confidence interval (CI) of 95% and 5% margin of error.8 The sample was raised using non-probability convenience sampling technique. Those included were young healthy adults aged 18-25 years. Those excluded were individuals with anaemia, pulmonary and cardiovascular diseases, history of thoracic surgery, active/passive/retired smokers and those with any active pathology. All the parameters were excluded by detailed history, general physical assessment and cardiopulmonary system assessment.

Data was collected after taking written informed consent from each subject.

Bruce protocol was used to measure VO2max. Pre-test vitals were noted. The subjects were given guidance over how they can stop the test process in case they felt over-exhausted or started to get symptoms of calf pain and shortness of breath. Other reasons of termination were participant’s denial and THR achieved. At the completion of Bruce protocol, participant’s post-test vitals were noted. The outcome measures in all the participants were assessed by a professional physical therapist to ensure uniformity. In the end, total runtime and gender was used to calculate VO2max using the formulas, VO2 max = 14.8 – (1.379 * T) + (0.451 * T2) – (0.012 * T3) for men, and VO2max = 4.38 * T – 3.9 for women.13

The participants were classified into superior, excellent, good, fair, poor, and very poor categories of VO2max.13

Data was analysed using SPSS 24. Mean and standard deviation was calculated for quantitative variables, like age, MHR, THR, total time on treadmill, VO2max and IPAQ score. Frequencies and percentages were calculated for qualitative variables, like gender, BMI, reason for termination, level of physical activity, VO2max categories according to age and norms for males and females. Shapiro Wilks normality test was applied on all baseline variables and p<0.05 for all the variable indicated that the data was not normally distributed. The test of choice was Wilcoxon signed rank test for inter-group comparisons. Spearman correlation was used to assess the relationship of VO2max with physical activity and BMI.14 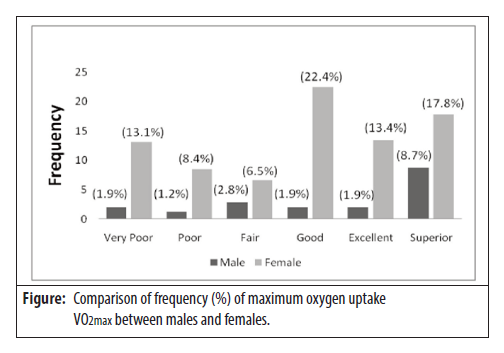 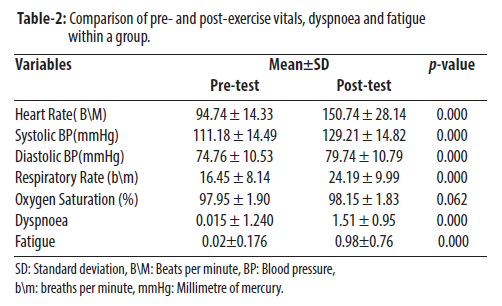 Greater VO2max in males might be due to the reason that they are taller, having greater muscle mass and lower BMI.

In present study, the findings of pre-test and post-test HR, SBP and DBP showed high significance. Similar results were reported by two studies.18,19

SBP was found increased because afferent signals are sent from the exercising muscles to the brain, stimulating the sympathetic centre and causing a rise in HR and cardiac output and resulting in SBP increase.20

However, conflicting results were found in the studies mentioned above for DBP.14,15 This conflict might be due to the differences in testing protocols.

Contrary to the results, negative but significant relationship was found in a study.23 This difference in results might be due to the different protocols used in the studies. Further, correlation of VO2max and BMI was seen at different categories of BMI and at different stages of exercise.20 VO2max, which indicates total body oxygen consumption, depends on ventilation and cardiac output. In obesity, due to accumulation of fats, lungs’ capacity to increase the ventilation is impaired which affects VO2max. Obesity also limits cardiovascular endurance with increase in workload. So increase in obesity can lead to decrease in cardiovascular fitness, which might be one of the possible reasons for the negative relationship of BMI with VO2max. Therefore, daily physical activity in early age of life should be promoted for better performance, and to increase muscle endurance.23

The current study has a few limitations, like male-female ratio being not equal in the sample. Also, VO2max and IPAQ were not assessed by gold standard tools, like VO2max   machine and accelerometer respectively.

Disclaimer: The institutional review board (IRB) was the same for two studies, conducted by two different groups of medical students. The current study is Phase 1, while phase 2 of the project relates to “effect of -intensity interval training versus continuous moderate training on peak VO2max in young adults of Islamabad”. The inclusion criteria of the second phase is young adults falling in very poor, poor and average category of VO2max from phase 1, and that is why the study was dived into two phases. The second phase will be conducted in future by other medical students under the supervision of the same supervisor.