In developing countries, most of the women suffer from protein-energy malnutrition, micronutrient malnutrition and vitamin-A deficiency. These deficiencies reduce the chances of weight gain during pregnancy, which results in inadequate growth of the foetus.1-3 Mothers with low body mass index (BMI<18.5kg2) or those who are underweight face adverse effects such as low blood pressure, fatigue, low bone mineral density, anorexia nervosa, and bulimia nervosa, which further leave adverse effects on their physical and mental health.4,5

In the literature, women’s age, education, and familial wealth status are known to have a significant effect on their BMI.6,7 Women's health and women empowerment are complementary to each other.8 Poverty causes malnutrition in countries where inequalities regarding health, education and economic resource between men and women exist.9 Gender inequality is also a major cause of hunger and malnutrition in women.10 A woman’s freedom of movement and mobility, her paid work and access to resources play an important role not only in improving her own nutritional status but also of her children.11-13 Women’s participation in decision-making is positively associated with their good nutritional outcomes.5,11,12,14-16

This paper attempts to investigate the impact of biological, demographic, and socioeconomic determinants of nutritional status of mothers in developing countries.

Taken from nationally representative Demographic and Health Surveys of 38 developing countries, secondary data (215,940 respondents) has been used for this study. Mother’s nutritional status was proxied through her BMI. The value of BMI below 18.5 kg2 was classified as undernourished whereas BMI value above or equal to 18.5 kg2 was classified as not malnourished. The explanatory variables such as mother’s age, education, age at first marriage, husband’s education and employment status, number of children ever born, number of children alive, household wealth and locality are self-explanatory and given by the data set. However, women’s empowerment was measured through constructing an index capturing the information on 17 indicators relating to five dimensions of women empowerment. The index was generated through principal component analysis (PCA) by using SPSS. Due to the dichotomous nature of the dependent variable, binary logistic regression was applied as the estimation technique. The Study was conducted in the Islamia University of Bahawalpur, Pakistan.

The results of the study are the outcomes of two types of analyses. 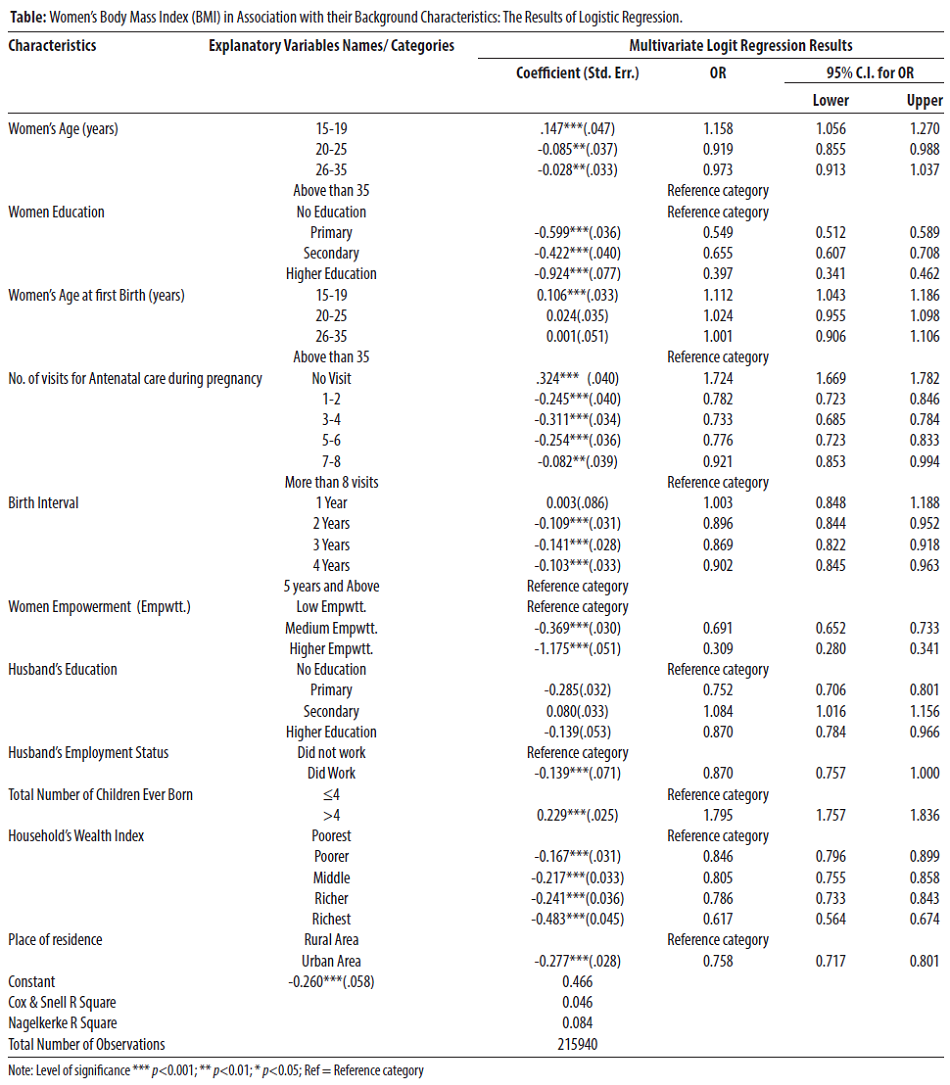 Column A (Table) presents the descriptive statistics (in the form of frequency distribution) and column B presents the probability of malnutrition. Here, we present the findings of binary logistic regression. According to the logistic regression results, women between the age of 15 and 19 years have more chances of being undernourished (OR=1.158, 95% CI=1.056-1.270) as compared to reference category of women above 35 years.

Wealth status of the household — to which a mother belonged — showed an inverse relationship with the prevalence of malnutrition among mothers. The probability of being malnourished for women belonging to the poorest households as compared to the women belonging to relatively well-off households reduced as the wealth status of the household improves. More rural mothers were suffering from malnutrition than the urban ones, i.e., the probability of malnutrition was high in rural women as compared to urban ones. It was noted that women with fewer children and living in the urban areas are healthier.21 Similar kind of explanatory variables have been embraced in the studies — on sufficient maternal iron supplementation22 and tetanus toxoid vaccination23 as the components of maternal healthcare — and for better maternal healthcare, the awareness and education of a woman, her husband’s participation, and cash transfer programmes have been proposed as the strategies to target mothers from the marginalised households of India.

21.    Sattar A, Baig S, Naveed ur Rehman, Bashir B. Factors affecting BMI; Assessment of the effect of sociodemographic factors on BMI In the population of Ghulam Mohammad Abad Faisalabad. Professional Med J 2013; 20: 956-64.