Objective: To compare the diagnostic accuracy of two systems in predicting mortality among patients with acute exacerbation of chronic obstructive pulmonary disease.

Method: The cross-sectional study was conducted from November 2017 to June 2018 in the Department of Chest Medicine, Jinnah Postgraduate Medical Centre, Karachi, and comprised patients with acute exacerbation of chronic obstructive pulmonary disease. Dyspnoea-eosinopenia-consolidation-acidaemia-atrial fibrillation system was compared with acute physiology and chronic health evaluation II scoring system after mortality scores were calculated for each patient. Data was analysed using SPSS 21.

Conclusion: Both scoring systems were found to be good predictors of mortality, but dyspnoea-eosinopenia-consolidationacidaemia-atrial fibrillation score was a simpler and effective clinical tool.

Chronic obstructive pulmonary disease (COPD) is a major public health problem. The disease is one of the most important causes of death worldwide. The Global Burden of Disease study projected it to become the third leading cause of death globally by 2020, while a newer projection estimated it to be the fourth one by 2030.1 Exacerbations are infrequent in early COPD and are largely a feature of moderate-to-severe disease.2 The American Thoracic Society (ATS) and the European Respiratory Society (ERS) define COPD exacerbation as an acute change in patient’s dyspnoea, cough, or sputum that is beyond normal variability and that is sufficient to warrant a change in therapy.3

Acute exacerbations of COPD (AE-COPD) are both common and often fatal.4 AE-COPDs are major events in the long-term course of the disease since their repetition is associated with impaired lung function, health status and survival and markedly increased healthcare costs.5 A large number of scales and scores have been developed for

AE-COPD, like dyspnoea-eosinopenia-consolidation-acidaemia-atrial fibrillation (DECAF),4 modified DECAF, CAPS4 (The COPD and Asthma Physiology Score).6 Scores like confusion urea-respiratory rate-blood pressure-age 65 (CURB-65),7 which was initially developed for pneumonia, has also been used in AE-COPD, and general intensive care unit (ICU) scoring systems, like acute physiology and chronic health evaluation-II (APACHE-II)8 has been used to predict mortality. Many studies comparing these systems have also been done on various populations with different results.9,10

The current study was planned to compare the diagnostic accuracy of DECAF and APACHE-II scoring systems in predicting mortality among AE-COPD patients.

The prospective cross-sectional study was conducted from November 2017 to June 2018 at the Department of Chest Medicine, Jinnah Postgraduate Medical Centre (JPMC), Karachi. After approval from the institutional ethics review committee, the sample size was calculated using diagnostic accuracy calculator16 with Sn=50%, Sp=81%, margin of error 10% and prevalence for detecting mortality 0.475. The sample was raised using non-probability consecutive sampling technique from among male and female patients aged 40-70 years, previously diagnosed with COPD for >6 months, and admitted with primary diagnosis of AE-COPD. Patients with myocardial infarction (MI), positive troponin-I, chronic kidney disease (CKD), creatinine >1.5, and malignancy were excluded.

After taking written informed consent, detailed history was recorded and both DECAF and APCHE-II scores were calculated for all the subjects. Clinical examination included assessment of mental state consciousness level, signs of exacerbation, chest radiological examination, electrocardiogram (ECG), arterial blood gas (ABG) analysis, measurement of serum creatinine and complete blood count (CBC). Mortality scores for AE-COPD were calculated for each patient and the individual parameters used in calculating the scores were also recorded. DECAF has 5 variables; extended Medical Research Council dyspnoea (eMRCD) 5a or 5b, eosinopenia <0.05x103/dL, consolidation, acidaemia with potential of hydrogen (pH)<7.3, and atrial fibrillation (AF), with a maximum score of 64. APACHE-II was scored out of a maximum of 71 based on 12 physiological variables, age and chronic health as per operational definition.8 At the time of discharge or death, the score were compared for in-hospital mortality.

Data ws analysed using SPSS 21. Frequencies and percentages were computed for categorical variables, like gender, smoking status, DECAF and APACHE-II scores and in-hospital mortality. Quantitative variables were presented as mean±standard deviation (SD), like age, duration of COPD, duration of AE-COPD. Open-epi 2x2 table was used to calculate sensitivity, specificity, positive predictive value (PPV), negative predictive value (NPV) and diagnostic accuracy of DECAF and APACHE-II for in-hospital mortality.17 Effect modifiers, like age, gender, duration of COPD, and duration of AE-COPD, were controlled through strictly following the inclusion-exclusion criteria and stratification. Normality of data was checked with Kolmogorov-Smirnov test, while chi-square and Mann Whitney U tests were used for comparison. P<0.05 was considered statistically significant. 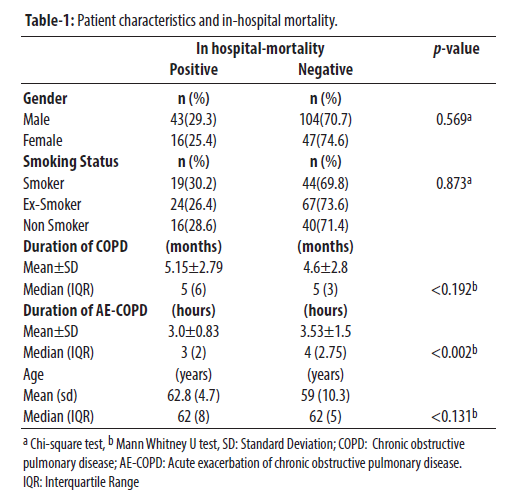 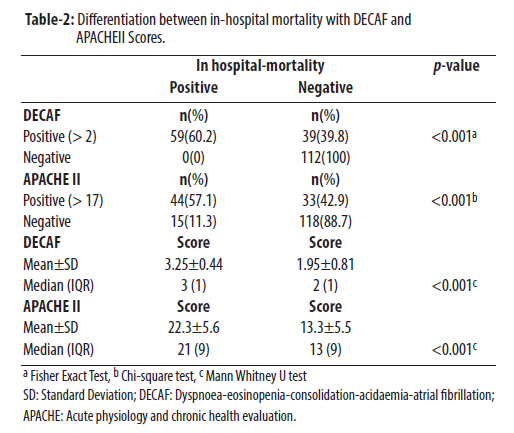 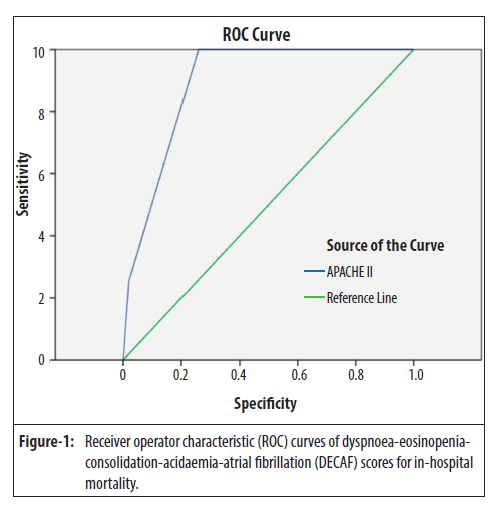 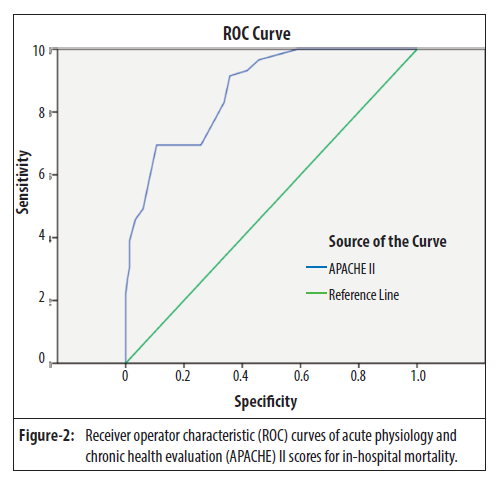 The difference between the scoring methods was not significant (Table 3).

Despite improvements in care, death during hospitalisation for AE-COPD is a challenging issue.9 AE-COPD is a common cause of admission to ICUs, but appropriate level of treatment of patients presenting to ICU with AE-COPD is still debatable.8,19 Several AE-COPD severity scores have been developed and are being used to predict in-hospital mortality from that condition. Also, a number of studies have been published in this regard.4,18-20 Various studies have been conducted locally to assess the prediction of mortality scores, specifically APACHE-II, in different clinical settings.21,22 The current study compared DECAF and APACHE-II scores, which are widely-used scoring systems. According to a study, DECAF score is a stronger prognostic score than the CURB-65, APACHE or COPD and asthma physiological score prediction tools.20

The mortality rate in the current study matched findings in literature.22,23 Studies4,19 have also shown mortality rates of 10.4% and 4%, possibly reflecting the different threshold for hospital admission among different countries. In a study, 41 patients were discharged after treatment and 9(18%) died during the hospital stay.24 Maha et al. reported that during the hospital stay, 20(7.58%) patients died.10

The current study found no significant difference in terms of smoking status and gender. Morbidity due to COPD was greater in men than women. Male gender and smoking habit had been known to have a significant correlation with mortality.10,25,26 Maha et al. found that the non-surviving group had a statistically significant higher age than the surviving patients.10 Roche et al.27 found that age was an independent risk factor for in-hospital mortality. The current study found no statistically significance difference between in-hospital mortality and age.

In the current study, DECAF score showed a good discrimination for in-hospital mortality. Also, it was better than the APACHE-II prognostic index in predicting in-hospital mortality. Different studies showed varying AUROC for APACHE-II and DECAF scores in AE-COPD patients.4,6,9,28 The current study has some limitations, as it was a single-centre study with a small sample size. Besides, other scoring systems were not compared. Despite the limitations, the study provides valuable clini  cal information for assessing ICU outcomes of AE-COPD.28,29

Both DECAF and APACHE-II scores were found to be good predictors of mortality, but DECAF score was found to be a simple, effective and quick tool to calculate mortality risk.

2.      BTS guidelines for the management of chronic obstructive pulmonary disease. The COPD Guidelines Group of the Standards of Care Committee of the BTS. Thorax 1997; 52 Suppl 5: S1‑28.