Conclusion: The serum uric acid levels of patients with IgA nephropathy should be monitored to effectively control hyperuricaemia and to avoid its complications.

IgA nephropathy is a group of immune glomerular diseases, primarily induced by IgA deposits in the mesangial area due to multiple etiological factors. This disease is the main pathological type of glomerulonephritis worldwide.1 In the past, the prognosis of this disease was considered good. However, in recent years, studies have shown that IgA nephropathy was a progressive glomerular disease. About 15-20% of patients with IgA nephropathy develop into end-stage renal disease within 10 years after pathological diagnosis using renal biopsy, hence needing renal replacement therapy.2 Donadio et al, reported that IgA nephropathy-induced end-stage renal disease accounted for 10% of all kinds of end-stage renal diseases.3 At present, the pathogenesis of IgA nephropathy remains elusive. The progression of IgA nephropathy is affected by many factors, such as age, severity of proteinuria, and high blood pressure. Recently, with the improvement of living standards and changes in dietary structure, especially the intake of foods rich in purines, the prevalence rate of hyperuricaemia is on the rise, and its pathogenic roles in cardiovascular and kidney diseases have attracted widespread attention.

Uric acid, as the final product of human and primate purine metabolisms, is mainly synthesized in the liver and small intestine. About 2/3 of serum uric acid is excreted by the kidney, and the remaining 1/3 is cleared in the intestinal tract. Both excessive serum uric acid production due to purine metabolism disorder and decreased uric acid excretion by the kidney can increase the uric acid level, causing hyperuricaemia. Besides, elevated serum uric acid level can cause gout, high blood pressure, cardiovascular diseases, kidney diseases, etc. Meanwhile, since uric acid is a reducing agent, the decrease of serum uric acid level inhibits the scavenging of considerable oxygen radicals, which may also damage renal function. Niskanen et al, found that uric acid might be an independent risk factor for cardiovascular and renal diseases after many other risk factors were controlled.4 Syrjänen et al, followed up 223 patients with IgA nephropathy for 10 years, and found that hyperuricaemia increased the risk of disease progression

This case control study has been approved by the ethics committee of our hospital, and written consent was obtained from all patients. Between January 2016 and December 2017, 244 patients with primary IgA nephropathy diagnosed by percutaneous renal biopsy in Jiangjin Center Hospital were selected. They were then divided into a group with normal serum uric acid level (n=182) and a group with elevated level (n=62). IgA nephropathy was diagnosed in accordance with the WHO classification criteria for pathological diagnosis of primary glomerular diseases in 1995.7 Exclusion criteria: Patients with IgA nephropathy caused by Henoch-Schonlein purpura, hepatitis B virus infection, systemic lupus erythematosus, cirrhosis and tumours; complication with other kidney diseases such as diabetic nephropathy, obesity-related nephropathy and interstitial nephritis; with systemic diseases that might affect renal physiology and pathology.

Age, gender, course of disease, body mass index (BMI), blood pressure, liver function, renal function, and levels of blood lipids, blood glucose and 24-hour urine protein were recorded. Fasting elbow vein blood was collected on the morning of the next day after grouping for routine blood and biochemical index tests. Procedure for 24-Hour urine protein excretion test was explained to all patients. Each patient was told to clear the bladder from 7 am from when timing was started and all urine discharged within 24 h was stored in a container (including the urine sample at 7 am) and mixed.

2)      BMI was calculated as weight in kgs divided by height in meter squared and obesity was defined in these subjects as BMI ≥28 kg/m2.8

4)      Hypertension: According to the JNC 8 Hypertension Guidelines from JAMA Network, a blood pressure of ≥140/90 mmHg during the course of disease or the physical examination upon hospital admission was defined as hypertension.10

A Tru-Cut biopsy needle was used to rapidly perform one-time percutaneous puncture under the guidance of ultrasonic B-scan, and living renal tissue samples were collected. A portion of the samples were embedded in paraffin, prepared into 2 μm-thick sections, and subjected to HE, PAS, PASM and Masson staining, respectively. Then Lee’s grade for IgA nephropathy11 and tubulointerstitial lesion (TIL) grade12 were evaluated under light microscope. The remaining samples were frozen, sectioned and stained with isothiocyanate-labeled goat anti-human IgG, IgA, IgM, C3, C4, C1q and fibrinogen. The deposition site, distribution characteristics and intensity of the kidney were observed with direct fluorescence staining. Indirect immunofluorescence assay was performed to detect hepatitis B, HBsAg and HBcAg. Then the degree of renal arteriolar lesions was assessed. Grade 0: Without lesions; grade 1: with mild thickening of the vascular wall, and without changes such as fibrinoid necrosis; grade 2: with moderate thickening of the vascular wall, accompanied by fibrin deposition, necrosis and mild luminal stenosis; grade 3: with obvious thickening of the vascular wall, hyaline degeneration, sclerosis, and obvious luminal stenosis.

All data were analyzed by SPSS 17.0 software. The continuous data were expressed as mean±standard deviation (X±SD), and inter-group comparisons were performed with t test. The categorical data were expressed as case number and/or percentage, and inter-group comparisons were conducted with Chi-square test. P<0.05 was considered statistically significant, and p<0.01 was considered strongly statistically significant. 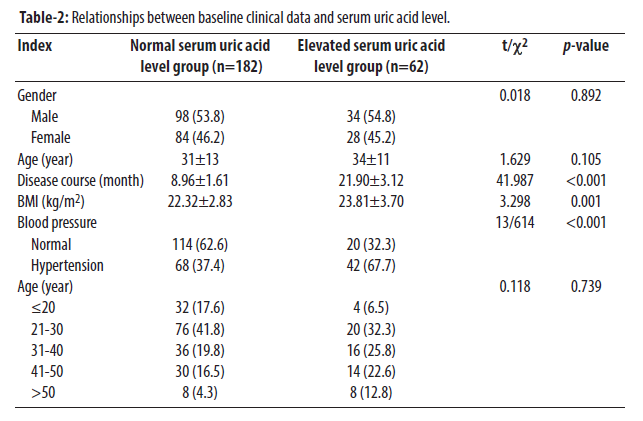 IgA nephropathy accounted for 32.7% of the primary renal glomerular diseases diagnosed by renal biopsy during the same period. The incidence rate of IgA nephropathy complicated with hyperuricaemia was 25.4%. The normal serum uric acid level group had significantly lower BMI as well as levels of urea nitrogen, creatinine, triglyceride and urine protein than those of the elevated serum uric acid level group (p<0.05) (Table-3). 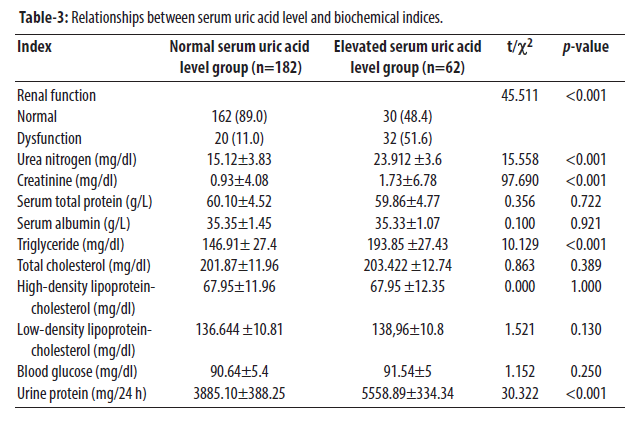 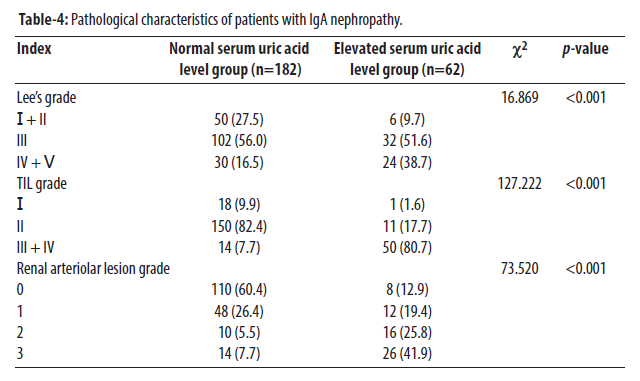 IgA nephropathy accounted for 32.7% of primary renal glomerular diseases diagnosed by renal biopsy in our hospital, which was lower than the reported incidence rate in literature.13 IgA nephropathy could occur at any age, but 80% of patients were 16-35 years old in one of the studies, which was consistent in our study.14 IgA nephropathy is more common in males. The male/female ratio was 2:1 to 6:1,15 and about 3:1 to 1:1 in China.16 Similarly, the ratio in this study was 1.18:1.

Hypertension is a common clinical manifestation of IgA nephropathy, which can accelerate the disease progression. A large number of animal and clinical studies have confirmed that hyperuricaemia was an independent risk factor for the onset and progression of

8.      Tan K, Consultation WE. Appropriate body-mass index for Asian populations and its implications for policy and intervention strategies. Lancet 2004; 363: 157-63.