A cross-sectional study was conducted from March to September, 2018 on the efficacies of albendazole and mebendazole against ancylostomiasis in school children of district Swat, Pakistan.

Faecal samples were collected from primary school children and preserved in 10% formalin. The samples were then sent to the Laboratory of Parasitology, in the University of Malakand for microscopic analysis. On the basis of drug availability, the Ancylostoma dueodenale infected students were divided into two groups. Group A was treated with Albendazole 400-450mg while group B was orally treated with Mebendazole 350-400mg. Eggs per gram were calculated before and after the treatment.

The present study concluded that albendazole and mebendazole are drugs of choice for the treatment of Ancylostomiasis.

According to World Health Organisation, two billion individuals are infected with STHs,2 about 3,000 to 65,000 deaths a year are caused by A. duodenale around the world.2 Hookworm infection is the leading cause of anaemia, loss of iron and protein in the intestinal tract. Kapadia et al,3 suggested that a mono infection of A. duodenale can use almost 150 µL of blood/per day from the host.

Most of the people included in the study area are dependent upon agriculture for their livelihood and used night soil as manure. They lived in muddy houses, their personal hygiene was low, they used faecally contaminated water, most are connected with farm animals and awareness on health was negligible; such conditions provide a suitable environment for the development of Ancylostoma duodenale.

Over the last several decades there has been a growing awareness about treatment through chemotherapy of STHs parasites in infected patients. Albendazole and mebendazole are the recommended treatment in patients all over the world2 while the WHO’s2 recommended drugs against STH are albendazole, mebendazole, zentel, Benzimedazole as well as levamisole.

For this study two rounds of faecal samples were collected from each student. Permission was taken from head of the school as well as parents prior to sample collection. On the first day, all students present were provided an empty faecal bottle that had an agreement form and was labelled with a distinctive ID number. After collection these faecal samples were sent for microscopic analysis. Those students who were found positive for ancylostomiasis were asked to meet their physician along with their parents. After 3 days of treatment another container with a letter and a unique number was provided to each infected student for their second stool sample. Each student was asked to write the name of the drug they had taken on the provided consent paper.

Data were analysed by using Graph paid version 5. Mean and standard deviation was calculated. P value of < than 0.05 was taken as statistically significant. 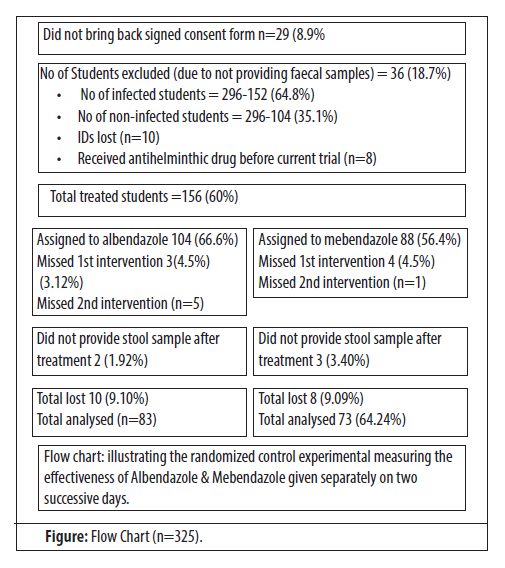 The efficacy of the drugs prescribed was noted via the counting of eggs in per gram of stool before and after treatment. Albendazole achieved a high ERR 75% whereas mebendazole resulted in 71% negative egg rate. No adverse effect was observed except in (n=3) cases in which Albendazole caused vomiting and diarrhoea (Table-1).

Geohelminths infestation is a global health problem for inhabitants of third world countries including Pakistan. Poor hygiene, impure water, overpopulation, improper disposal of faecal matter, contacts with soil in non-cemented houses, and immigration of public to capitals are key factors in the spreading of STHs. In Pakistan, soil transmitted helminthiasis are present in more than 29% of all school students.4

In the last four decades different studies have been published on the efficacies of albendazole and mebendazole that have ranged from 25.8% to 87.9% ERR.

Only school children between the ages 6-15 were enrolled for the study and data was collected only from those who agreed to participate.

Albendazole was found to be the more effective drug showing a 75% efficacy against ancylostomiasis.

Community hygiene should be developed to reduce the incidence of infection and tests must be conducted from time to time in the population.

Disclaimer: This manuscript was a part of MS/Mphil thesis degree of the 1st Author.

Funding Sources: The study was conducted with the facilities provided under the project SRGP #21-61 granted by HEC, Islamabad, Pakistan.