Hepatic venous outflow obstruction, due to hepatic venous thrombosis is the hallmark of Budd-Chiari Syndrome (BCS), a relatively uncommon disorder. The aim of this study was to explore imaging details and causes, and define invasive and non-invasive interventions for achieving successful portosystemic shunting (PSS).

The variations in imaging topology and associated risk factors in BCS cases, diagnosed during the past 20 months, were studied. Of the 53 cases (32 males, 21 females; mean age: 34.4±13.5 years), 5 (9%) were Hepatitis-B virus (HBV) positive, 12 (23%) were HCV positive and 6 (11%) were co-infected, rest were negative. Imaging features included mottled cirrhotic hepatic parenchyma, thrombosed hepatic and portal-vein with or without IVC thrombosis, left lobe atrophy, caudate hypertrophy, splenomegaly, portosystemic varices and ascites. Three cases had subacute onset; two had acute while the rest were chronic BCS. The aetiology was: protein C, S and anti-thrombin deficiency in 24 (45%), JAK2 mutation in 3 (6%), lupus antibody with increased homocysteine levels in 5 (9%) and cryptogenic in 21 (40%) cases. Twelve cases were planned for liver transplantation, 20 were prepared to undergo TIPS, and the rest were optimised medically.

Budd-Chiari syndrome (BCS) is a rare, complex liver disorder triggered by obstruction of one or more hepatic veins (HVs). Globally, the frequency of BCS is one in 100,000 among the general population.1 In two-thirds of the cases, hypercoagulability is recognised as the primary cause; more than one etiological factor may play a role in one-third of the cases. Primary myeloproliferative disorders are the principal cause of BCS in the Western population. Hepatic venous outflow obstruction leads to hepatic congestion and hypoxic damage of hepatocytes, which ultimately result in primarily centrilobular fibrosis.2 The cause of HVs obstruction may be thrombotic or non-thrombotic neoplastic infiltration as seen in angio-invasive hepatocellular carcinoma (HCC). It can occur anywhere along the course of hepatic venous drainage from hepatic venules to inferior vena cava (IVC) extending up to the right atrium. As compared to other chronic liver conditions, appropriate medical and radiological intervention or open surgical management leads to good prognosis.3

The spectrum of clinical presentation may range from acute symptoms like abdominal pain, ascites and hepatomegaly or chronic symptoms secondary to portal hypertension with haematemesis and melena, precipitated by acute exacerbation. Aetiology of BCS can be primary, if the origin is due to endoluminal obstruction of the hepatic venous system caused by a thrombogenic disorder or hypercoagulable state. Secondary sources are external compression of HVs caused by the mass effect of growing tumour mass or direct neoplastic invasion of hepatic venous drainage.4 Low levels of protein C, protein S, and anti-thrombin III is a common finding associated with acute thrombus and in patients with chronic liver disease, including BCS. Because liver produces circulating proteins and it is affected in liver dysfunction, proof of the primary deficiency remains a dilemma. Primary protein C deficiency is the most common disorder in chronic BCS group, prevailing in about 25% cases.5

On imaging, pathognomic features are enlarged caudate lobe in a majority of chronic BCS cases, caused by compensatory hypertrophy due to its direct venous drainage into the IVC. Non-visualisation of HVs, particularly in chronic cases, is due to long-standing thrombosis and compression caused by surrounding hepatic fibrosis with regenerating nodules. Portal vein thrombosis is present in about 15-20% of cases and likely related to sluggish and inert bloodstream exacerbated by the underlying prothrombotic conditions.6

Our aim was to study various radiological imaging patterns of BCS based on CECT, its etiology and outline the radiological interventions for achieving successful PSS.

Patient Selection Criteria: After getting approval from the institutional review board and informed consent from the study cases, all those with suspected or known BCS, referred from the department of gastroenterology, were reviewed retrospectively between January 2018 and September 2019. The study was conducted at Radiology Department, Pakistan Kidney and Liver Institute & Research Centre (PKLI & RC), Lahore, Pakistan. Baseline clinical and laboratory data were collected to classify the patients according to the Child-Pugh Score (CPS), and MELD (Model End-Stage Liver Disease) score to evaluate the functional status of the patient at the time of initial presentation. Baseline laboratory investigations included liver function tests, serum alpha-fetoprotein levels, analysis for a JAK2 mutation, protein C and S, anti-thrombin levels, serum ceruloplasmin and ferritin levels. Antibody titers for antinuclear antibody(ANA), anti-smooth muscle antibodies (ASMA) and anti-mitochondrial antibody (AMA), as the possible autoimmune cause of chronic BCS, were performed. Multidisciplinary team meetings planned further management.

Based on disease onset, clinical signs and imaging patterns, BCS cases were classified as acute BCS, if the symptoms developed within a month with decompensated liver disease with or without renal failure; or subacute (insidious onset with no ascites); or chronic BSC with changes related to liver cirrhosis and portal hypertension.

Clinical characteristics and Imaging features: Of the total 53 cases, 32 (60%) were males, and 21 (40%) were females, aged between 14 to 75 years (mean age: 34.4 ± 13.5 years). Child-Pugh Score / CPS-A, 12 (23%); CPS-B, 36 (68%) and CPS-C, 5 (9%) with median MELD-Na score of 10; 5 (9%) cases were Hepatitis-B virus (HBV) positive, 12 (23%) were HCV positive and 6 (11%) HBV/HCV co-infected, the rest of 30 (57%) were non-infected. Imaging features were mottled cirrhotic/nutmeg hepatic parenchyma (median size 19.8cm; range 16-24.6 cm), thrombosed hepatic veins ± IVC with or without portal vein thrombosis, left lobe atrophy, caudate hypertrophy, splenomegaly, portosystemic varices and ascites. Three cases had subacute onset, two had acute onset disease, while the rest were chronic BCS. Thrombosis of the central portal vein (PV) and its tributaries was seen in nine and cavernous transformation in seven cases; the rest had patent PV. Two cases had splenic and superior mesenteric vein thrombosis as well.

Thirteen cases had an imaging-based diagnosis of hepatocellular carcinoma with Alpha-Fetoprotein/AFP range 1125-20,000 ng/ml; the rest had <6ng/ml. Two cases had histopathological evidence of HCC as well.

Underlying Aetiology: The aetiology of BCS were protein C, S and anti-thrombin deficiency in 24 (45%) cases, JAK2 mutation in three (6%), lupus antibody with increased homocysteine levels in two (4%) and positive ANA, ASMA and AMA antibody titres in 3 (5%) cases, and cryptogenic in 21 (40%) cases. None of the cases showed positive work up for myeloproliferative disorder or paroxysmal nocturnal haemoglobinuria (PNH).

Twelve cases were offered liver transplantation, six of them had HCC as well; 20 candidates were planned to undergo TIPS including two for angioplasty, and the rest were medically optimised. Of a total of 53 cases, 12 patients have died, seven were lost to follow up, while the rest are on regular six-monthly follow up.

BCS may present with an acute/fulminant onset, sub-acute or chronic, depending on the duration and nature of presenting complaints. In our study, only two cases had an acute form of the disease, while all the rest of the cases had chronic BCS.

MPDs account as an aetiology for more than half of BCS cases in Europe and 90% of cases are diagnosed with JAK-2 mutations.9 In our study, three (6%) out of 53 cases had JAK-2 mutation, while none had MPD on genetic and laboratory workup.

The imaging spectrum of BCS is quite diverse and depends on the phase of the disease. In acute BCS disease, the morphology of the liver does not vary much and exhibits patchy areas of reduced peripheral perfusion with central enhancement and thrombosed hypo-attenuating hepatic veins, as shown in Figure-1. 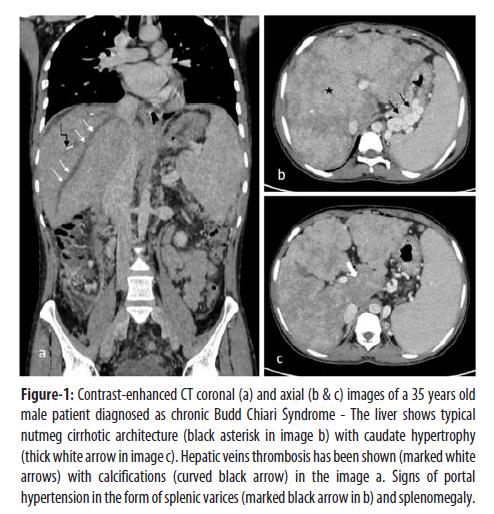 The IVC is compressed by the enlarged caudate lobe, due to its direct venous drainage into IVC, explaining the possible cause of its hypertrophy. Ascites and splenomegaly may or may not be present in early forms of BCS. Chronic thrombosis of the HVs or IVC can evolve into calcification.10

Chronic BCS is also characterised by the development of multiple regenerative nodules (Figure-2), 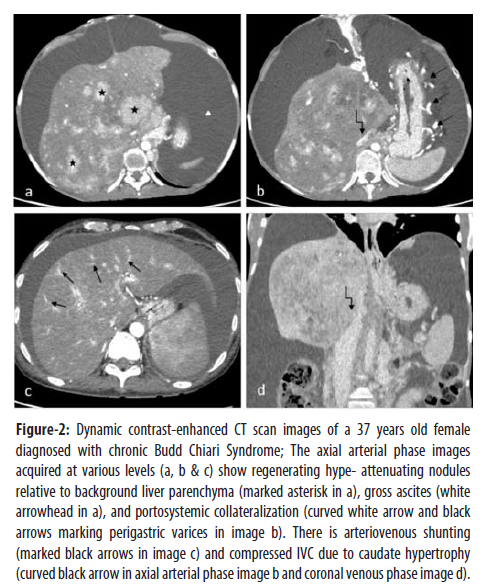 which can be viewed as arterialised areas with preserved hepatic venous outflow and remain relatively hyper-attenuating on portal venous phase images, differentiating them from typical HCC lesions. 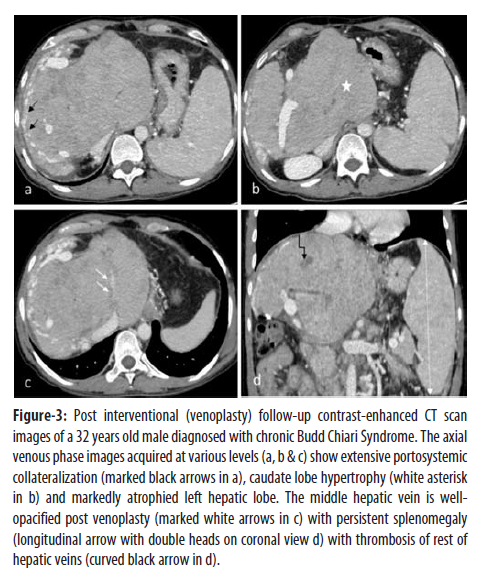 Figure-3 shows the post interventional CECT imaging of a case with chronic BCS who underwent venoplasty of middle HV. Although the patient has significant varices in the visualised sections, the clinical symptoms improved following venoplasty.

Frequency of limb salvage after infra-inguinal bypass for chronic limb-threatening ischaemia in diabetics: A retrospective study