Chondromyxoid fibroma is a rare tumour, representing <1% of all primary bone neoplasm. We report the case of a four-year-old female child with a one-year history of nasal obstruction and facial swelling. A large enhanced lesion with amorphous densities spreading into the right cribriform plate and floor of sphenoid sinus, laterally into the right lamina papyracea, inferolaterally into the medial wall of maxillary sinus, posteriorly into the nasopharynx and superior aspect of oropharynx was observed on CT scan. The mass was excised by Caldwell Luc's endoscopic medial maxillectomy via sublabial approach. CMF was confirmed histopathologically.

Chondromyxoid fibroma (CMF) is a rare benign tumour, estimated to represent less than 1% of all primary bone neoplasm and characterised by incomplete differentiation with chondroid, myxoid and fibrous areas in varying proportions.1 CMF usually involves metaphysis of long tubular bones mainly proximal tibia and distal femur.1 Tumours of craniofacial bones are extremely rare and most often involve the mandible and maxilla.2 In majority of the cases, CMF is discovered in young adults during the second and third decade of life and has a slight male predominance in a ratio of 1.28:1.3 The tumour is slow-growing, accompanied by mild symptoms (slowly progressive local pain, swelling, restriction of motion) that presents over months to years depending on the site and size.1 Histologically, there are typical spindle-shaped lobules or stellate cells with multinucleated giant cells of different sizes in a myxoid matrix.1 If incompletely removed, CMF proves to be quite aggressive locally and tends to recur, especially in children.3 In this report, we present the case of a four-year-old patient with CMF in the right nasal cavity with intraorbital extension.

A four-year-old Afghani female child admitted in otorhinolaryngology department of the Dr Ruth K. M. Pfau Civil Hospital, Karachi in October 2019, presented with a one-year history of progressive right-sided nasal obstruction and facial swelling. On physical examination, a pinkish mass could be seen protruding from her right nostril, and the septum was deviated towards the left side and obstructing the left nasal cavity as well, associated with heavy watery nasal discharge. There was no bleeding and the mass was not tender. Patency was decreased bilaterally and there was no sense of smell on the right side, but slight on the left side. There was also involvement of the right eye leading to proptosis. However, the patient did not have any visual impairment on visual acuity assessment using a Snellen chart, neither was there any restriction of extraocular movements. There was no history of weight loss or any cervical lymphadenopathy.

A computed tomography (CT) scan was performed with contrast which showed a large heterogeneously enhancing lesion with internal dense amorphous densities, with extensions into the right cribriform plate and floor of sphenoid sinus, laterally into the right lamina papyracea, inferolaterally into the medial wall of the maxillary sinus, posteriorly into the nasopharynx and superior aspect of oropharynx (Figure-1). 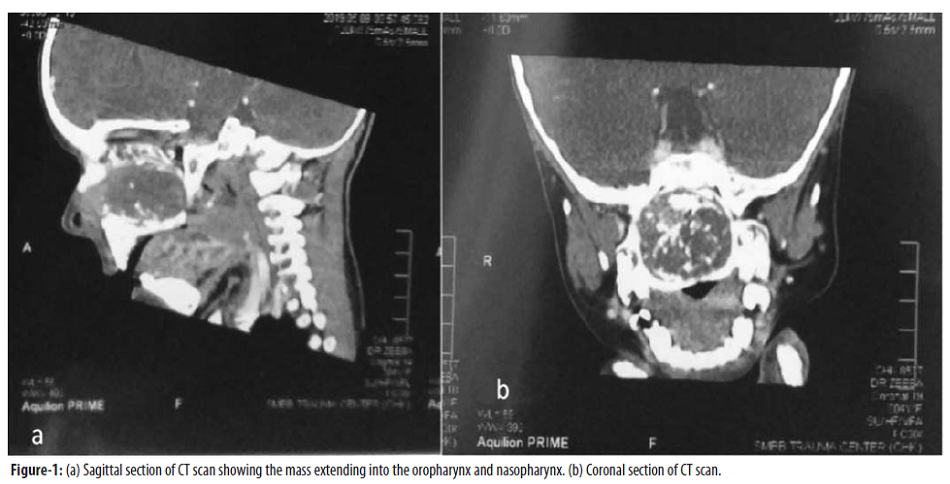 Echocardiography was done to exclude any cardiac anomaly.

The patient was operated under general anaesthesia. Caldwell Luc's endoscopic medial maxillectomy was performed via the sublabial approach and the mass was removed (Figure-2). 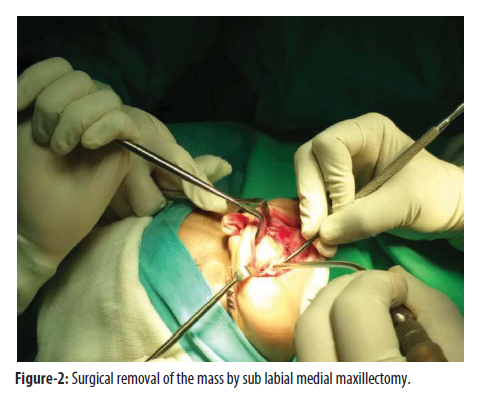 The biopsy performed before surgery was consistent with the features of Chondromyxoid fibroma. The specimen, after surgical removal, was sent for histopathological evaluation which showed fragments of tissue partly covered with stratified squamous and respiratory epithelium with several ulcerated areas. The underlying stroma has lobules of stellate to spindle-shaped cells present in a myxoid matrix (Figure-3). 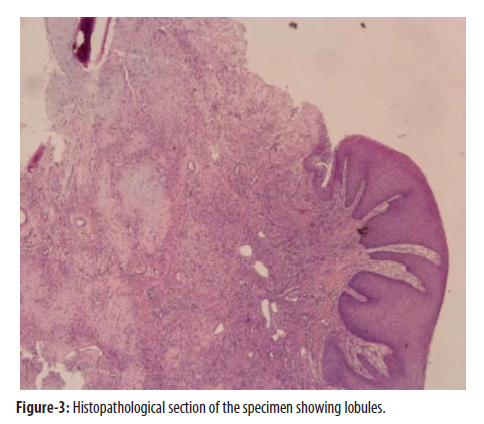 At the periphery of the nodule fibrous cells were present. Entrapped bony fragments were also noted. Separately lying granulation tissue was present. The patient was followed up in outpatient department (O.P.D) till six months. The patient was vitally stable and no signs of complications were noted during follow-up. Informed written and verbal consent was taken from the patient and her attendant regarding this study.

We encountered a rare case of Chondromyxoid fibroma of right nasal cavity. Primarily, Jaffe and Lichtenstein in 1948 narrated CMF as an extremely peculiar tumour with precursor elements being derived from cartilage.4 It accounts for <0.5% of bone tumours and mostly involves the metaphysis of long bones.1 The commonest site of involvement is around the knee joint. Craniofacial involvement is quite rare, approximately 5.4% with mandible and maxilla most commonly affected.5 Within the head and neck area, some cases have been discovered in paranasal sinuses, clivus, sella turcica and mastoid process.6 According to Nazeer T et al the nasal cavity in chondromyxoid fibroma is infrequently involved; this accentuates the distinct characteristic of our case,7 as in our case right-sided nasal cavity was involved.

The aetiology is still slightly obscure, but some immunological factors and anomalies involving chromosome 6 are implicated. Recently, specific genetic marker for CMF of long bone that is a pericentric inversion of chromosome 6 [inv (6) (p25q13)] has been anticipated.8 Numerous distinct breakpoints on chromosome 6 are non-randomly elaborated in CMF. A case report on a nasal cavity CMF by Smith CA et al has sharply linked the insertion between chromosomes 6 and 19 regarding this tumour arising from the nose.9

Normally, there is a male predilection when this neoplasm involves other sites. In contrast, when craniofacial involvement occurs, females of age more than 40 are twice likely to be affected.5 Our case slightly contradicts these trends as our patient was only four years old.

Symptomatic features depend upon the site of involvement. In the nasal cavity, CMF manifests as epistaxis, nasal congestion refractory to treatment, headache, diplopia, proptosis.9 Our patient presented with nasal obstruction and facial swelling.

On microscopy, Chondromyxoid fibroma portrays classic clusters of myxoid and peripheral fibrous elements with focal chondroid differentiation. In our report, the specimen showed multiple fragments of nodular lesions covered partly by squamous epithelium and partly by respiratory epithelium. Myxoid matrix and stellate long spindle-shaped cells were present in the centre of the lesions which were peripherally surrounded by fibrous cells. Many histopathologists misinterpret this pleomorphic appearance of CMF for chondrosarcomas, giant cell tumours or osteosarcomas.

Chondromyxoid fibroma needs to be individualised from three tumours arising in the cranium, namely chondroma, chondroblastoma, and chondrosarcoma. A polygonal eosinophilic cytoplasm and prominent calcifications discriminate chondroblastoma from CMF.10 CMF conspicuously distinct itself by the expression of cytokeratin antigens, epithelial membrane antigen and protein S-100, whereas chondroma and chondroblastoma stain positively for S-100 protein only. Low-grade chondrosarcomas, being more infiltrative than CMF, illustrates the lack of fibrous component.10,11 Our case was crucial as it infiltrated the orbit, lamina papryacea, and hard palate. Surprisingly, though the tumour was inseparable from medial rectus, there weren't any signs of vision compromise. We opted for complete surgical excision of the tumour as it is the substratum of treatment.1 The rate of recurrence and malignant transformation as stated is 11.5% and 0.7%, respectively.12

Usually chondromyxoid fibroma (CMF) affects the metaphysis of long bones; rarely occurs in craniofacial region especially the nasal region. In some literatures, it is mentioned that female of older age (greater than 40) has predilection of craniofacial region. We here present a case which involves right nasal region that is quite rare occurrence of this tumor, and the patient being only 4 years-old.

Owing to its rare site and occurrence in very young age, we are publishing a case report here to aware surgeons of its infrequent site and age. This will help the surgeon to keep it in differential diagnosis of the tumours of nose and will further help in devising a plan for management of such rare tumours.