The present study evaluated and compared functional outcomes of proximal humerus fractures of different categories and their management with different procedures. Data of this prospective cohort was obtained from the orthopaedic trauma registry at a tertiary care hospital for the period from June 2015 to October 2019. Sixty-eight adult patients with proximal humerus fracture were identified out of which 57 (84%) had been operated. Functional outcomes were assessed up to 12-month follow-ups and were compared with different treatment groups, fracture category, and between isolated versus proximal humerus with additional upper limb fractures. At 3-month follow-up, there was significantly better outcomes in Proximal Humeral Internal Locking System (PHILOS) treatment group as compared to PHILOS with bone graft/BMP (p=0.041). PHILOS combined with bone graft/BMP was associated with delayed recovery compared to other management methods. There was non-significant difference in functional outcomes between isolated versus proximal humerus fractures associated with other upper limb fractures, among different fracture categories and between genders.

According to literature, patients who encountered two-part fractures and were treated with intramedullary nailing showed satisfactory results while patients who sustained three- and four-part proximal humerus fractures and were treated with ORIF, intramedullary nailing or conservatively showed non-satisfactory functional outcomes.8-11 Patients managed with PHILOS achieved better functional outcomes and fracture stability in two- to four-part fractures.12,13

Furthermore, several research studies conducted on proximal humerus fractures, managed with different treatment approaches to evaluate their functional and clinical outcomes. It was observed that functional recovery was satisfactory for up to 14 months on average following proximal fracture treatment.14 Patients who underwent ORIF, although achieved bone union within three months after surgery, immobilisation for four weeks post-surgery resulted in stiffness or developed number of complications including malunion, screw protrusion, osteonecrosis, etc. Some patients required revision surgery or implant removal after ORIF procedure.15-17 PHILOS has become one of the most commonly used implant for fixation of proximal humerus fractures as several studies have suggested PHILOS to be the best treatment option for proximal humerus fractures. PHILOS had significantly better clinical and functional outcomes in majority of the patients, specifically in younger patients associated with satisfactory bone union. However, some patients did encounter surgery-related complications such as impingement, avascular necrosis, implant failure, stiffness, superficial surgical site wound infection and glenohumeral screw penetration.12,18-22

The current study data was extracted from a single-centre, prospective ongoing Orthopaedic Trauma Registry initiated after all institutional and ethical approvals in June 2015 at the Aga Khan University Hospital.23,24 Eligible patients older than 18 years of age, irrespective of gender, with trauma associated proximal humerus fractures were included. Patients with pathological fractures, and patients who underwent amputations were excluded. Written informed consent was taken from the patients or the guardian, if the patient was unable to give the consent by himself/herself. Trauma related data was obtained from patients' medical records and their outcomes were assessed by a senior researcher at 6 (±2) weeks, 3 months (±2 weeks), 6 (±1) months and 12 (±2) months after treatment.

From June 2015 to October 2019, a total of 69 adult proximal humerus fracture patients were identified from trauma registry. Out of 69 one patient, who was treated with circlage wire, was excluded from the analysis, while 68 patients remained in the study. Prospective cohort data obtained from trauma registry demonstrated 56 (82%) cases with isolated proximal humerus fractures, and 12 (18%) had associated other upper limb fractures as well. Functional outcomes were assessed on follow-up using Quick Disabilities of the Arm, Shoulder and Hand questionnaire (Quick DASH), categorised on the basis of scores as 'good (0-24)' to 'fair (25-49)' and 'poor (50-74)' to 'severe disability (75-100)'.25 Neer's classification was used for proximal humerus fracture categories.6 Data was analysed on SPSS version 19.0. Descriptive analysis was performed for age, gender, mechanism of injury and type of management. Continuous variables were expressed as mean (± standard deviation) and categorical variables as percentages (%). The p-value of less than 0.05 was considered as statistically significant with a confidence interval of 95%. 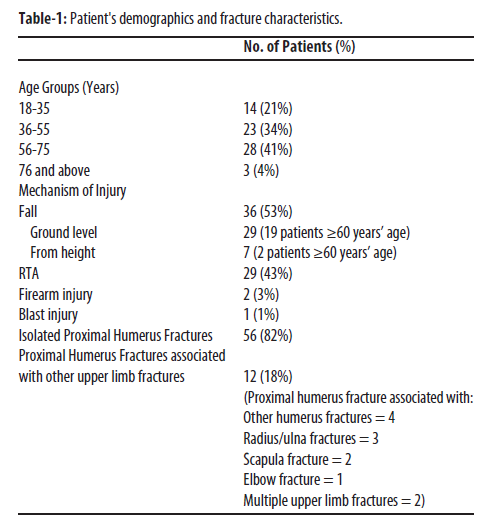 All the patients were managed with standard care by their treating orthopaedic surgeon and the cost was covered by the patient. Based on treatment procedures, the patients were divided into four groups ORIF, PHILOS, PHILOS with bone grafting/bone morphogenetic protein (BMP) and non-operated. As a routine practice, orthopaedic surgeons selected bone grafting or BMP with PHILOS, depending on 3-part to 6-part fracture category. Majority of the patients (N=42, 62%) underwent PHILOS procedure, followed by ORIF (N=9, 13%). PHILOS combined with bone grafting or BMP was performed in 6 (9%) patients and 11 (16%) patients were managed conservatively. The difference in outcome ('good' to 'fair' and 'poor' to 'severe disability') between surgical procedures was analysed using Fisher Exact test.

On the basis of different treatment approaches, relationship between treatment procedures to functional outcomes was assessed. At 6-week follow-up, except for PHILOS treatment group, in which 30 patients were assessed for outcomes, 7 (23%) achieved 'good' to 'fair' outcome. The rest of the patients in all treatment groups had 'poor' to 'severe disability' by this time.

At 12-month follow-up, all 4 patients, who were assessed for outcomes in PHILOS and non-operative group were able to perform routine daily activities without limitation. ORIF (N=2 of 3, 67%) and PHILOS combined with bone graft/BMP (N=1, 100%) treated groups still had difficulty in shoulder range of movement and impaired grip. 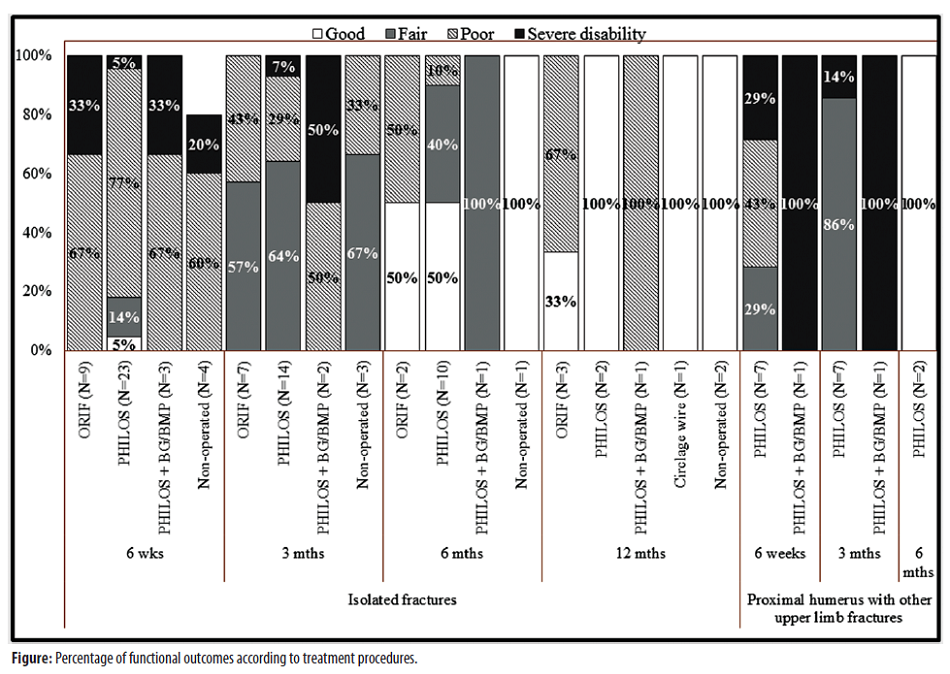 Fisher Exact test showed non-significant difference in functional outcomes at follow-ups 6 weeks onwards between groups A and B.

There was non-significant difference in functional outcomes between males and females. Patients' visit status was also recorded for each follow-up visit (Table-2).

Disclaimer: Study abstract was presented as a poster at Annual Surgical Conference held at Aga Khan University on February 14 to 16, 2020.

Funding Disclosure: The study was supported by the Aga Khan University Hospital, Department of Surgery, from May 2015 to February 2019. From March 2019, Project No. AOTME-R-2016-010 was supported by AO Foundation, Switzerland.