Correlation of serum calcium with severity of acute ischaemic stroke

Stroke is categorised as the number one cause of disability and the third most common cause of mortality worldwide. Literature reports that an estimated 6.5 million people lose their lives due to stroke every year, out of which 75% deaths occur in developing countries.1 The majority of strokes in Pakistan are a result of cerebral ischaemia, with the most common type being lacunar stroke.2 TOAST (Trial of Org 10172 in Acute Stroke Treatment) classification of stroke has classified the causes of ischaemic stroke into: large artery atherosclerosis, cardio-embolism, small vessel disease, other determined aetiologies and undetermined causes.3 Multiple variables have an impact on the prognosis and outcome of stroke, such as age, comorbidities, cause of stroke, location and severity of stroke, level of consciousness and blood glucose.3

Calcium is known to play a significant role in the pathogenesis of ischaemic stroke, since cerebral ischaemia causes an increase in intracellular calcium resulting in activation of cytotoxic enzymes leading to cell death.4 The present study was conducted to determine the correlation, if any, between serum calcium and severity of acute ischaemic stroke, and to establish the local perspective as there is a paucity of local data even though we are burdened with a large number of people presenting with acute ischaemic stroke.

A retrospective observational study was conducted at the Department of Medicine, Aga Khan University Hospital, Karachi, from January 2018 to December 2018, after taking ethical approval from the Ethical Review Committee (2018-0267-153). All patients presenting acutely within 24 hours of suffering stroke with CT scan at the time of admission showing a hypodense area, plus any two or more of the following symptoms inability to move one or more limb, aphasia, imbalance and GCS <15, were labelled as acute ischaemic stroke. Severity of the stroke was measured according to the Scandinavian stroke scale (SSS). Patients with a history of mania, bipolar effective disorder or post-traumatic stress, history of thyroid and parathyroid disorders, history of blood transfusion within one week, history of CNS disease (e.g. head trauma, multiple sclerosis), and with history of congestive heart failure, chronic renal failure, chronic obstructive pulmonary disease and chronic liver disease, were excluded. A score of less than 43 was classified as mild stroke, 26-43 as moderate, and less than 26 as severe stroke.5

We compared patients' characteristics as mild, moderate, and severe stroke by using Student t-test or Wilcoxon rank-sum test for continuous variables and chi square test or Fisher exact test for categorical variables based on cell counts. Spearman rank correlation test was performed to investigate the relationship between calcium quartiles and stroke severity and p-value of < 0.05 was taken as significant. 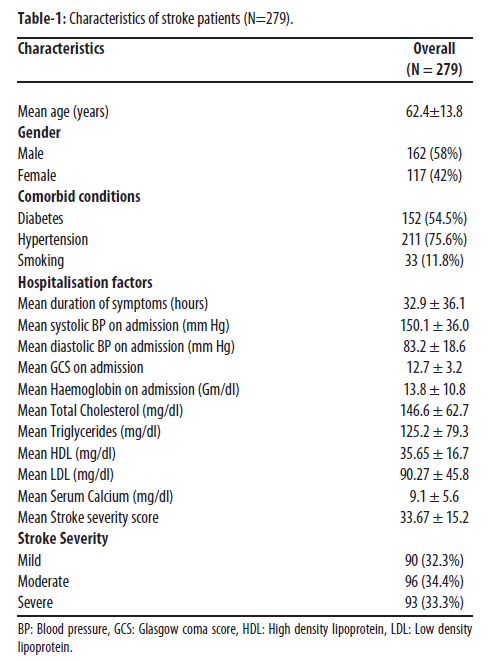 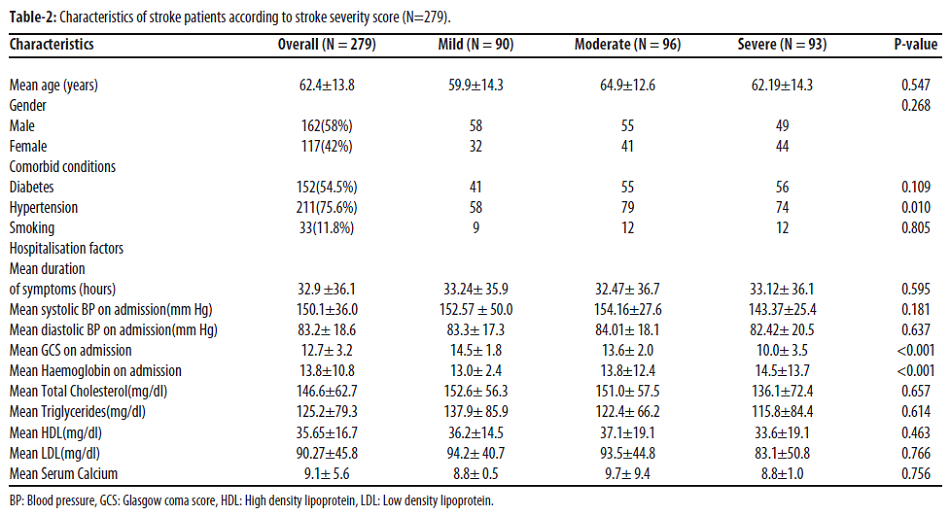 Table-2 shows the characteristics of stroke patients according to stroke severity score.

Stroke is one of the foremost causes of mortality and morbidity throughout the world, whether it is in the developing or developed country.1 Calcium ions are known to be involved in the pathophysiology of cerebral ischaemia as hypoxia/ischaemia results in transfer of calcium ions from extracellular to intracellular cerebral tissue spaces.4 Our study, however, showed no significant correlation between serum calcium and acute ischaemic stroke severity.

Review of literature, both global as well as regional has shown conflicting results. Some studies have found serum calcium to be low in transient ischaemic attack and further low calcium has been hypothesised to occur in ischaemic cerebral infarction.6 Some meta-analyses have even reported an inverse association between dietary calcium intake and risk of ischaemic stroke.7 However, some studies have reported that there is no significant association between serum calcium and stroke severity or serum calcium and risk of ischaemic stroke.8,9 One study has even suggested that higher levels of serum calcium are associated with more severe artery stenosis lesions.10 These arguments have led us to believe that serum calcium is not a reliable marker for accurate prediction of severity of stroke or its prevalence.

The study is limited by its design (retrospective study) and the timing of calcium samples could also not be accurately ascertained. However, it is important to note that all patients had a serum calcium sent at admission as part of initial baseline workup, from the emergency. Furthermore, since a majority of the patients presenting to our tertiary hospital have either been previously admitted elsewhere or are from far flung areas, true serum calcium values can neither be found nor can it be judged, if the value of serum calcium will be classified as early or late even if the study was done prospectively. Another problem with retrospective data collection was the quality of the data in the file and variability in the examination done by the physicians. Nonetheless, this study has offered new local information to clinicians which can influence clinical practice. Previous studies on this topic have used the modified NIHSS scale. Our study is unique as it uses the Scandinavian stroke severity scale, which has been found to be equal to the NIHSS and is easy to apply in the acute clinical setting.5

Conflict of Interest: The authors declare they have no conflict of interest.