Objective: To report long-term outcomes after pancreaticoduodenectomy from a single centre.

Methods: The retrospective study was conducted at Shifa International Hospital, Islamabad and comprised pancreaticoduodenectomy procedures performed by four surgeons at a single centre from January 2011 to June 2019. Outcome was assessed on the basis of morbidity, in-hospital mortality and survival. Data was analysed using SPSS 20.

Conclusion: With standardisation of operative technique and peri-operative management, low in-hospital mortality and acceptable long-term outcomes were achieved with standard and extended pancreaticoduodenectomy.

Pancreaticoduodenectomy (PD) remains one of the most complex abdominal surgical operations. In recent times, its safety has improved in centres with expertise.1 In fact, mortality in experienced centres is now as low as 1-2%.2,3 This marked improvement in outcome is due to refinement in surgical technique, centralisation of PD to high-volume centres, and efficient ancillary systems.4,5 Long-term outcomes post-PD have not been reported from Pakistan. Various reasons have been cited for this, including low prevalence, advanced stage at presentation and lack of follow-up protocols.4 Most reports include small cohorts demonstrating short-term outcomes with focus on in-hospital morbidity and mortality.6-8 Moreover, there is limited experience with extended pancreatectomies, lymphadenectomies and vascular resections.4,5

As a dedicated hepato-pancreato-biliary surgery and liver transplant unit at Shifa international hospital, we have performed complex pancreatic resections since 2011. These include multivisceral and additional venous resections.

The current study was planned to report short- and long-term outcomes post-PD from a single centre in Pakistan.

The retrospective study was conducted at Shifa International Hospital Islamabad and comprised data related to PDs performed by four liver transplant and hepato-pancreatico-biliary surgeons at a single centre from January 2011 to June 2019.

Details of patient selection, operative variables and post-operative care have been elaborated elsewhere.4,5 The study was approved by the institutional ethics review committee.

Pre-operative biliary drainage was reserved for patients with total bilirubin >10mg/dl or suspicion of cholangitis. Borderline resectable tumours were considered for upfront surgical resection. Venous resections, arterial resections and additional organ resections were performed selectively, if required, to achieve negative margins. In addition, extended lymphadenectomy of the aorto-caval region was routinely performed. Frozen sections from the pancreatic transection margin and bile duct margin were routinely sent and if positive, re-resection was performed. All patients had duct-to-mucosa pancreaticojejunostomy fashioned with PDS 6/0 over a Roux loop. Early nasojejunal feeding on post-operative day (POD) 1 and regular diet on POD 4 was encouraged. Broad-spectrum antibiotics carbapenems were administered for 5 days.

Demographics, clinical and histopathological variables were noted on a proforma. Morbidity was assessed based on Clavien Dindo grading.9 Post-operative pancreatic fistula (PF) was described as per the International Study Group on Pancreatic Fistula (ISGPF) guidelines.10 Multivisceral resection (MVR) was defined as the removal of an additional organ along with PD. Arterial resections were also considered MVR.11 Survival analysis was performed after the exclusion of patients who underwent PD within 1 year and/or patients with non-cancerous lesions on histopathology. Overall survival (OS) was calculated by subtracting the date of death or the last follow-up from the date of surgery. Survival was determined with Kaplan Meier curves and Log rank test was used to determine significance. All analyses were performed using SPSS 20. P<0.05 was considered statistically significant.

There were 155 PDs conducted during the study period (Figure-1). 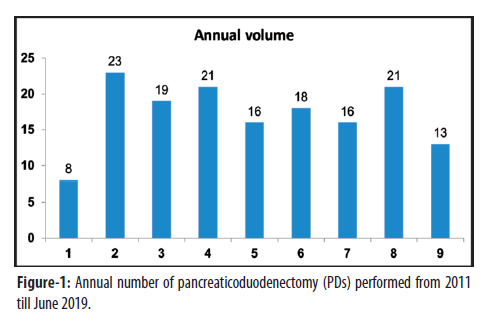 Of the 155 patients, 103(66.5%) were males. The overall mean age was 56.8±13.5 years (range: 8-85 years). Endoscopic retrograde cholangiopancreatography (ERCP) was the most common pre-operative drainage procedure done in 80(51.6%) patients, while 2(1.3%) patients underwent surgical bypass at an outside facility before undergoing PD. Extended procedures were performed in 42(27%) patients (Table-1).

Ampullary 57(36.8%) and pancreatic adenocarcinoma 52(33.5%) were the most common histopathological diagnosis (Table-2). 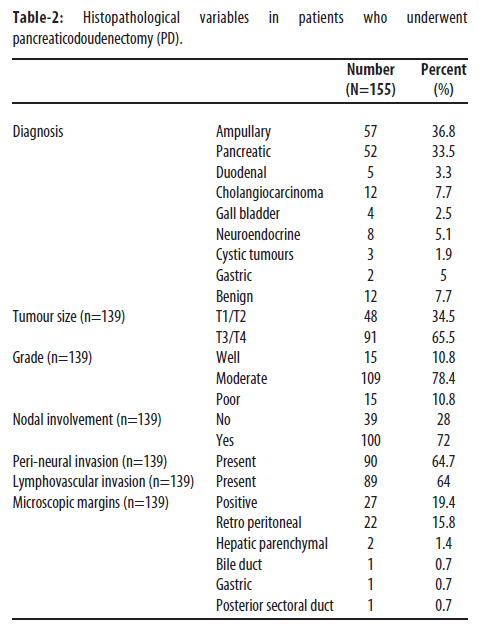 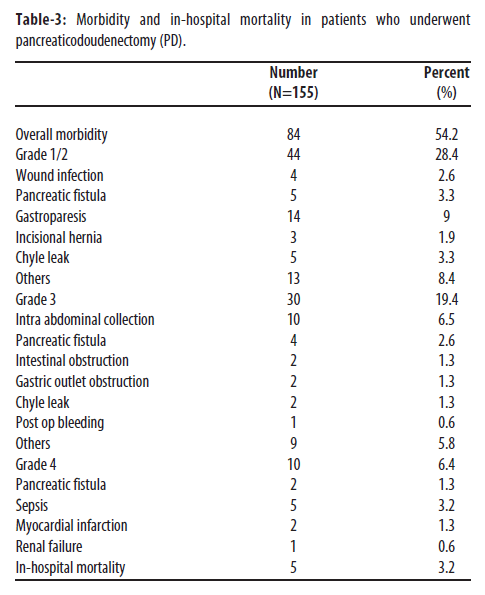 Grade B PF was seen in 5(3.2%) patients and required prolonged drainage and antibiotics. There were 6(3.8%) grade C PF, and 1(16.6%) case each required percutaneous aspiration, re-exploration with washout, redo of pancreaticojejunostomy and total pancreatectomy, while 2(33%) patients developed sepsis and multi-organ failure, with 1(16.6%) requiring re-exploration for post-operative bleeding. There was bleeding from the drain site which was controlled. In addition, 4(2.6%) re-explorations were performed; 2(1.3%) each for gastric outlet obstruction and intestinal obstruction. Further, 3(2%) patients developed small incisional hernias and were managed conservatively. In-hospital mortality was 5(3.2%); myocardial infarction (MI) 2(40%), sepsis 2(40%) and PF 1(20%). The remaining 150(96.7%) patients were discharged in good health. 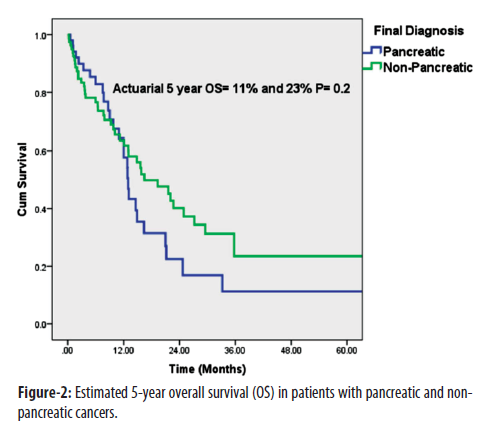 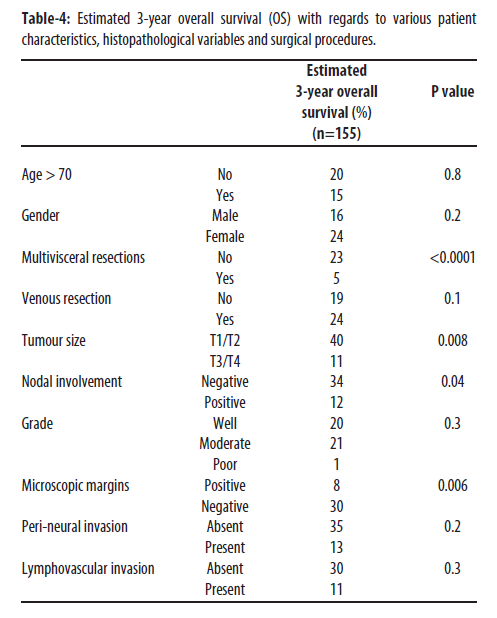 The current study is the largest single-centre experience on outcomes post-PD from Pakistan. It demonstrated acceptable long-term outcomes and provided insight into the unique epidemiology of patients undergoing PD for various pathologies in Pakistan.

A recent review showed that PD outcomes were reported in a total of 255 patients from Pakistan. A different epidemiology, lack of centralisation for complex procedures, and absence of research culture were cited as factors responsible for inadequate reporting.4 In a recent single-centre report, disease-free survival of 16±2.62 months was reported after PD. However, prognostic factors for survival were not assessed.12 Another study comprising 44 patients assessed safety of pancreaticogastrostomy instead of pancreaticojejunostomy with no post-operative pancreatic fistula (POPF), but a short-term mortality of 11.9%.13 Pal et al. reported short-term outcomes from a large cohort of PD patients over a period of 23 years (n=121).8 The post-operative mortality was 10% and annual number of PD was low (5.2 resections/year). Another study reported on 39 patients who underwent PD over 13 years (3 resections/year) with 15% post-operative mortality.14 This very well reflects upon lack of centralisation for PD where some of the best centres have had low annual numbers for PDs. Lack of follow-up remains another major problem and only short-term results have been reported.7,8 Despite the fact that vascular resections and MVRs were performed in a significant number of patients, the estimated 5-year survival was comparable to international reports. Plausible reasons include low numbers of poorly-differentiated tumours and microscopic margin-positive rate.15-17

The rate of clinically relevant POPF was impressively low in the current study which can be attributed to extensive living donor liver transplant (LDLT) experience. Prior LDLT experience has been shown to positively impact outcomes post-PD due to the attainment of a higher skill set and operative mix.5,17-19 As a result, outcomes comparable to high-volume centres worldwide (>50 pancreatic resections/year) were achieved despite moderate annual volumes for PD.20

We assessed the impact of old age (>70 years) and MVR on PD outcomes. There is limited and conflicting data on PD outcomes in older patients and those undergoing MVR.15,21-23 Outcomes post-MVR were significantly inferior in the current study. Since MVR is associated with better outcomes compared to palliation, a selective approach in patients undergoing MV-PD is warranted. We did not observe any difference in outcomes in patients undergoing venous resections for borderline tumours versus those who had standard PD. This is in agreement with previously reported literature.4,24