Methods: The cross-sectional comparative study was conducted at the University of Health Sciences, Lahore, Pakistan, from July 2016 to April 2019, and comprised patients of metabolic syndrome selected from the Sheikh Zayed Hospital, Lahore. Healthy controls were also enrolled. Fasting venous sample was taken for the determination of study parameters. The genetic variant of hypoxia-inducible factor-1 alpha was analysed by restriction fragment length polymorphism polymerase chain reaction. Data was analysed using SPSS 22.

Results: Out of 400 subjects, 200(50%) each were patients and controls. The frequency of CC genotype of hypoxia-inducible factor-1 alpha Cytosine > Thymine in patients was 166(83%) and in controls 147(73.5%); CT genotype was 34(17%) and 53(26.5%) respectively, while TT genotype was not observed. There was a significant association of the C allele and CC genotype (p=0.03) with the increased risk of metabolic syndrome (p=0.02). On comparison of study variables in the two genotypes, systolic blood pressure, anthropometric and lipid parameters were significantly higher in the wild CC genotype compared to CT in the control group (p<0.05), but there was no significant difference in the patients (p>0.05).

Metabolic syndrome (MetS), an emerging global health burden, is the clustering of clinico-biochemical derangements that considerably increase the risk of coronary artery disease (CAD) and diabetes mellitus (DM). These derangements include dyslipidaemias, hypertension (HTN), insulin resistance (IR) as well as thrombotic and pro-inflammatory states.1 The frequency of MetS is rising in an epidemic proportion both in the developing and the developed world. About one-fourth of the world population is having this metabolic disorder. In a meta-analysis from Asian Pacific area, the lowest prevalence was found in the Philippines (11.9%) and the highest (49%) in urban Pakistan, more specifically, Karachi.2-4 Another study on Pakistani population reported the prevalence of central obesity based upon waist circumference (WC) 45-65% and hypertriglyceridaemia (HTG) 25-55%, whereas 68-80% subjects had low plasma high-density lipoprotein (HDL) cholesterol and 50% were hypertensive.5 There are different MetS definitions. The most widely accepted are those of the revised National Cholesterol Education Programme Adult Treatment Panel III and the International Diabetes Federation (IDF).6 According to IDF guidelines, peri-visceral or abdominal adiposity is the core component of MetS. Due to the accumulation of excessive adipose mass in the omental or peri-visceral areas, there is regional hypoxia followed by adipose dysfunction and imbalance in the release of adipocytokines.7 The transcription factor Hypoxia-inducible factor-1 (HIF-1), a dimer of alpha (a) and beta (b) sub-units, is the key regulator for the maintenance of tissue oxygen equilibrium in response to hypoxia. In normoxic states, one of the two proline residues of HIF-1a undergoes hydroxylation followed by tagging with the von-Hippel-Landau protein, a member of ubiquitin ligase complex that mediates degradation of HIF-1a in proteasomes. In hypoxic conditions, HIF-1a moves to the nucleus and gets attached to the hypoxia response site on the deoxyribonucleic acid (DNA), resulting in up-regulation of the genes responsible for adaptation of the tissues to hypoxia. HIF-1a induces the expression of the glycolytic enzymes and glucose transporters, thus shifting cellular metabolism from oxidative mitochondrial phosphorylation to cytoplasmic glycolysis.8 Currently, HIF-1a is also reported to be involved in the regulation of energy and lipid homeostasis in various metabolic derangements, such as MetS and type 2 diabetes mellitus (T2DM). Hypoxia plays an important role in the pathophysiology of obesity, IR and ageing by the production of free oxygen radicals which increase the release of inflammatory cytokines, such as interleukin-1b (IL-1b) and tumour necrosis factor alpha (TNFa) from the immune cells. These pro-inflammatory cytokines stabilise HIF-1a by inhibiting the enzyme prolyl-hydroxylase; conversely increased HIF-1a expression attenuates inflammation by down-regulating the receptors for the inflammation-provoking cytokines.9

HIF-1a, rs11549465 [1772 Cytosine (C) > Thymine (T)] is a non-synonymous genetic variation;  the mutant genotype TT results in the replacement of proline with serine in HIF-1a protein with a dramatic increase in its transcriptional activity in comparison with the common variant CC.10 According to a study on Caucasian population, the minor allele T of HIF-1a, rs11549465 has been reported to have a protective role against DM, and the increased frequency of this allele was found to be present in the controls compared to the cases.10 There is no previous study, to our knowledge, from Pakistan reporting the association of HIF-1a single nucleotide polymorphism (SNP) with MetS or related traits, such as central obesity, HTN and dyslipidemias. Molecular interaction between the genome and environment are considered important in the initiation and progression of the pathogenesis of IR and its various complications.11 The current  study was planned to find the association of SNP of HIF-1a, rs11549465 (1772C>T) with MetS, and to compare MetS-related anthropometric and biochemical variables in different genotypes of HIF-1a.

The cross-sectional comparative study was conducted at the University of Health Sciences (UHS), Lahore, Pakistan, from July 2016 to April 2019. After approval from the institutional ethics review board, the sample size was calculated on the basis of minor allele frequency of HIF-1a in DM cases 0.07 and controls 0.13.10 while setting power at 80% and significance level 0.05. The formula used was

of hypothesis test for two-population proportions.12

The sample comprised equal number of MetS patients and healthy controls. Subjects evaluated the current study were same as those already recruited by an earlier study and clinical characteristics of the subjects have been shared already.13,14 Diagnosed cases of MetS, according to the IDF 2005 guidelines1 were selected from the Endocrinology and Diabetes Clinic of Sheikh Zayed Medical Complex, Lahore. Healthy controls matched for age and gender were selected from among the hospital staff or non-blood related attendants of out-patients. The controls were non-diabetic and non-hypertensive with no history of intake of lipid-lowering, anti-diabetic and anti-hypertensive medications.

After taking informed consent, data was collected using a questionnaire related to disease history, demographics, clinical and biochemical parameters. All MetS patients were centrally obese with WC >90cm in males and 80cm in females, and all of them had any two of the following four features; blood pressure (BP) >130/85; fasting plasma glucose (FPG) >100mg/dl; serum HDL <40mg/dl in men and 50mg/dl in females; and serum TG >150mg/dl. All those already taking anti-hypertensive or lipid-lowering agents were considered dyslipidaemic or hypertensive irrespective of their present status. In order to take FPG sample, fasting status was defined as no caloric intake for 8-10 hours.15

Major MetS-related traits evaluated included BP, WC, FPG, fasting insulin, IR, serum HDL, TG and cholesterol. Other associated anthropometric obesity variables, such as body mass index (BMI), waist-to-hip ratio (WHR), triceps skin fold thickness (TSFT) and mid-arm circumference (MAC), were also evaluated. Body weight was taken on a standard hospital scale bare-footed with minimal clothing. Height was measured by wall-mounted stadiometer. WC was measured by non-stretchable tape midway between the iliac crest and lower border of the last rib at the end of expiration. BMI was calculated by dividing the weight in kg by height in square meters. MAC was recorded with the non-stretchable tape between the acromion and olecranon process at the posterior aspect of the arm. TSFT was taken with the Harpenden caliper between acromion and olecranon process at the posterior aspect of the arm.13 A fasting venous sample of 8ml was taken, and the serum was separated to check the biochemical parameters. Serum insulin was measured by enzyme-linked immunosorbent assay (ELISA) with the respective kit ((Amgenix International Inc. San Jose, California, USA, for insulin). Serum TG, cholesterol, HDL and glucose were measured by colorimetric method (Randox Laboratories Ltd., Crumlin, Co. Antrium, BT29QY, United Kingdom). IR was calculated by homeostatic model assessment for insulin resistance (HOMA-IR) using the following equation; HOMA-IR = fasting glucose (mmol/L) x fasting insulin (µ IU/ml) / 22.5.16

Genotypic and allelic frequencies were calculated and Hardy-Weinberg equilibrium was determined. Genotype frequencies of two groups were compared using chi-square test, and odds ratio (OR) was calculated. Logistic regression was applied to see the association of genotypes with T2DM after controlling for age and gender. 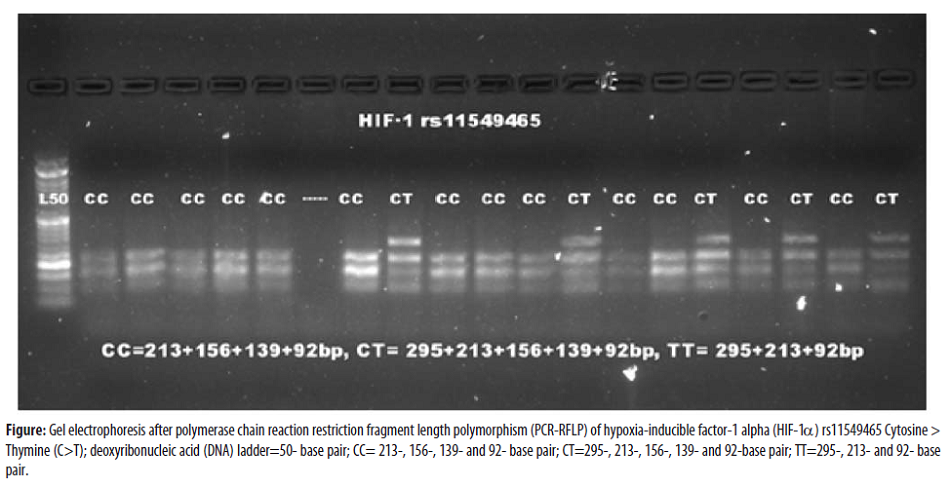 Among the MetS patients, 170 (85%) were diabetic, 170(85%) were hypertensive and 186(93%) were dyslipidaemic. Anthropometric, glycaemic and biochemical parameters were significantly higher in cases than controls (p<0.05).

The present study evaluated the association of SNP of HIF-1a rs11549465 (1772C>T) with MetS and its various recognised features. The minor allele frequency (MAF) T in the study population was 0.085 in the cases and 0.130 in the controls. On comparison with the 1000 Genomes database, it was found to be proportionate to the reported MAF of South Asians, such as; Punjabi Pakistani population (0.120), Bengalis in Bangladesh (0.093), Gujrati Indians (0.097) and Sri Lankan Tamils in the United Kingdom (0.098).19 Reported MAF from Africans was 0.033, East Asians 0.046, Americans 0.086 and Europeans 0.100, with the highest recorded MAF being 0.187 from Toscani Italy.19 In the current study the minor genotype TT of HIF-1a was not detected. However, frequency of the heterozygous CT genotype was significantly higher in controls than the cases and the wild allele C was found to be associated with increased MetS risk. The minor allele T had a protective role against MetS.  Protective role of this polymorphism has also been reported against type 1 and 2 diabetes in Caucasians in Hungary.10 In a Chinese sample, T allele of HIF-1a was found to be protective against diabetic nephropathy.20 The C>T variation of HIF-1a was also found to be associated with T2DM in Japanese.21 A study conducted on Americans with type 1 DM (T1DM), 1772C>T polymorphism of HIF-1a was found to have a protective role in male patients of diabetic nephropathy.22

In the current study, MetS-related traits, such as SBP, WC, TSFT, MAC and serum TG were significantly less in the CT variant of HIF-1a (1772 C>T) compared to the CC in controls, but there was no difference in the cases. The findings in the controls were in concordance with the observations of a recent meta-analysis.23 The non-synonymous 1772 C>T mutation results in replacement of proline (582) with serine in HIF-1a protein, and has been observed to make HIF-1a more resistant to the repressive effect of hyperglycaemia in renal medulla of diabetic mice.22 Another experimental study on mice revealed that the susceptibility of HIF-1a deleted mice to environmentally triggered T1DM increased significantly.24 The protective role of this SNP was also observed in the development of diabetic retinopathy in T1DM patients from Sweden.25 In our study the discrepancy in the cases might be because of the alteration in metabolic homeostasis in MetS, and also because most patients were on lipid- and glucose-lowering therapy which might interfere with normal tissue responses to inflammation.26 Another study from India on T2DM with and without diabetic foot ulcers reported higher frequency of mutant T allele in cases (63%) compared to the controls (50%). Moreover, decreased HIF-1a gene expression was observed in T2DM with foot ulcers compared to those without foot ulcers and the controls.27

The subject of the "HIF-mediated" regulation of lipid metabolism has been under review recently, and the outcome of previous studies based upon HIF-associated network, whether detrimental or beneficial in metabolic diseases, is still to be determined.9,28 One of the limitations of the present study is that the messenger ribonucleic acid (RNA) and HIF-1a levels were not checked.