Eradication therapy for gastric cancer in Inner Mongolia: A single-center study over 10 years

Objective: To understand the characteristics, diagnosis and treatment of gastric cancer in a specific geographical region.

Results: Of the 2,049 patients, 1619(79.01%) were males and 430(20.99%) were females. The overall mean age of the sample was 60.94±10.90 years. The incidence of gastric antrum was the highest, with 830(40.51%) cases. The proportion of gastric cancers was different in different age groups (p=0.001). Of the total, 922(45%) cases were poorly differentiated adenocarcinoma. There were significant differences in the histological types of gastric cancer in different age groups (p=0.001). There were 130(6.3%) cases of Mongolian patients, and the composition ratio of each age group was not significantly different from that of Han ethnicity (p>0.05). However, location was different with 55(42.31%) cases involving oesophago-gastric junction.

Gastric cancer is one of the most common malignant tumours of the digestive tract, with a certain degree of heterogeneity.1 It is the fifth most commonly diagnosed cancer in the world, and over a million new cases of gastric cancer are diagnosed each year.2 According to 2019 data, gastric cancer is the third leading cause of cancer deaths worldwide, following lung and colorectal cancer in overall mortality. Characteristics of gastric cancer vary in different regions, and its occurrence is closely related to living habits and environmental factors.3

The current study was planned to analyse clinical and pathological data of gastric cancer over 10 years to understand the different characteristics between Han and Mongolian patients.

The retrospective study was conducted at the Affiliated Hospital of Inner Mongolia Medical University, China, and comprised clinical and pathological data of patients with gastric cancer treated from 2007 to 2017. The hospital is the largest clinical diagnosis and treatment centre in western Inner Mongolia with a gastric cancer database established in 2007.

Data included related to all cases that were confirmed pathologically by gastroscopy, and had early or advanced gastric cancer having undergone six months of chemotherapy. After the diagnosis was confirmed, surgery was performed, and clinicopathological data was completed. Data excluded related to cases of distant metastasis, preoperative neoadjuvant chemotherapy, incomplete data, repeated examinations, unclear diagnosis, and other gastric malignancies. Stratified analysis was done according to the patients' ethnicity, gender, age, tumour location, differentiation degree, Bormann classification,5 tumour-nodes-metastases (TNM) staging6 and pathological type. Follow-up, wherever necessary and possible, was conducted by telephoning patients in person or asking their families, or through in-patient and out-patient re-examination. Pathological diagnosis and histological classification was done according to the World Health Organisation (WHO) classification, categorising gastric cancer into adenocarcinoma, papillary adenocarcinoma, tubular adenocarcinoma, mucinous adenocarcinoma, signet ring cell carcinoma and other types. Degree of cell differentiation was used to divide them into high, medium and poorly differentiated ones.

Overall, gastric antrum was the location in 830(40.51%) cases, body of the stomach 501(24.45%), oesophago-gastric junction 623(30.41%), total gastrectomy 55(2.68%), and stomach stump 40(1.95%). The proportion of gastric cancer locations in different age groups was significantly different (p=0.001). The ratio of esophagogastric junction cancer increased with age (p=0.001). The difference between gastric body cancer and gastric antrum cancer was significant (Figure-1). 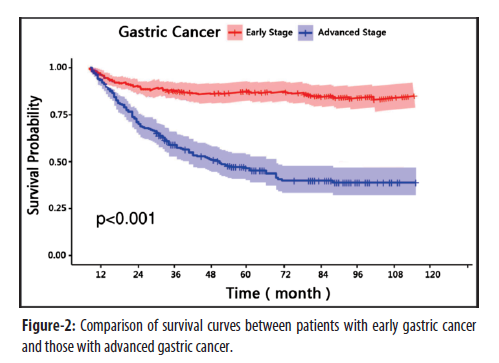 The western region of Inner Mongolia is an area with high incidence of gastric cancer in China. Different regions in China have different incidence rates of gastric cancer, but the average incidence age of gastric cancer has been 55.70-64.89 years, and the current study showed results similar to the national data.7-9 The largest number of patients were aged 61-75 years, and this may be because it takes a long time for the malignant change to happen and carcinogen cells to form tumours, and because of the elderlies' declining ability to get the mutations removed owing to impairment in their immune surveillance function.10 However, in recent years, the incidence of gastric cancer has presented a younger trend year by year. It is reported that11 in the last 40 years, the incidence rate of gastric cancer among young patients aged 19-35 has increased from 1.7% to 3.3%. Studies in Jiangsu, Henan, Hunan, Beijing, Guangdong and other regions in China have shown that the male-female ratio of gastric cancer patients is about 1.84-3.04:1, which is close to the WHO's ratio of 2.32-1 for the incidence of gastric cancer in men and women worldwide.12 However, the proportion of male patients in this study was slightly higher than that in the above regions at 3.77:1. The results of this study were more similar to those in Xinjiang and Shanxi where the male-female ratios were 3.36:1 and 3.86:1 respectively.13,14 By comparing the lifestyle habits and regional characteristics, it is believed that the high proportion of male patients may be related to higher rate of smoking and drinking in the region. Eating too fast and too hot, greater life pressure in social roles, and physiological differences between men and women are also contributing factors in men being more likely to suffer from gastric cancer than women.15,16

The histopathological types of the cases in this study were mostly low-differentiated adenocarcinoma, which is consistent with earlier results.8 Gastric cancer tissue classification among young patients was poorer. The possible reasons for the young patients may be because of certain genetic susceptibility, as its incidence is related to the mutation of calcium mucins CDH1 gene encoding epithelial type embryo.13

The current study has certain limitations. The time span of the study was short. Besides, the sample size of Mongolian patients was small, and the long-term survival of patients was not included, which needs to be supplemented by further research. It is necessary to conduct long-term multicenter randomised controlled studies with larger sample sizes.

21.    Talley NJ, Hunt RH. What role does Helicobacter pylori play in dyspepsia and Nonulcer Dyspepsia? Arguments for and Against H. Pylori being associated With Dyspeptic Symptoms. Gastroenterology. 1997; 113:S67-77.

24.    Cao ZZ. Relationship between the feature of endoscopy and pathology and the age of patients with progressive gastric cancer. Hainan Med J. 2009; 20:12-32.

29.    Rehemutula A, Shaoyimu P, Yusupu A. Retrospective analysis of the clinical characteristics of the gastric cancer in the old middle aged patients in XinJiang. Modern Prev Med. 2010.