Effects of proprioception training programme on balance among patients with diabetic neuropathy: A quasi-experimental trial

Objective: To determine the effects of proprioception training in improving balance in patients with diabetic neuropathy.

Methods: The quasi-experimental study was conducted at Safi Hospital, Faisalabad, Pakistan, from August to December 2019, and comprised diabetic neuropathy patients of both genders aged 60-83 years. They were divided into two groups of cases and controls, with the former getting. proprioception training twice a week for eight weeks along with diabetes awareness lectures once a week, while the former group only received awareness lectures. Static and dynamic balance were assessed using one leg standing test with eyes open and closed, Berg balance scale and timed-up and go test. Data was collected at baseline and post-intervention. Data was analysed using SPSS 23.

Conclusion: Proprioception training exercises were found to be effective in improving balance among patients with diabetic neuropathy.

Diabetes is a major concern worldwide due to its variable presentation and multiple symptoms. The prevalence of diabetes mellitus (DM has been found to be 2.8% and it is expected to go up to 4.4% by 2030.1 Among the long-term effects associated with DM, there is peripheral neuropathy that can lead to amputations through development of ulceration.2 In patients who have been diabetic for more than 20 years, neuropathy is prevalent in more than 50% patients.3 At any time of their life around 10-50% of the diabetics present with symptoms of polyneuropathy.4 Peripheral neuropathy is used for a general enfeebling and progressive condition which attacks the peripheral nerves that are an important constituent of peripheral nervous system responsible for balance maintenance.5 Peripheral neuropathy accompanied with diabetes often falls in the category of symmetrical sensorimotor neuropathy that involves distal body parts and is progressive in nature.6 Incidence of neuropathy increases as the time course of the disease increases, ranging from 20.8% when the disease has lasted <5 years to 36.8% when the disease has lasted >10 years.6 The characteristic manifestation of diabetic neuropathy is a "glove and stocking pattern".7 The prevalence of peripheral neuropathy due to any causative factor among adults aged >55 years is 2.4%.8 The involvement of large diameter fibres leads to proprioceptive deficits in diabetic patients.9 When the proprioceptors are affected by the disease process, the basic mechanism of balance becomes impaired, manifested through delayed postural and righting reflexes.10 These delays ultimately result in balance impairment among the diabetics. Moreover, balance deficits lead to increased fall risk in the elderly.11

The role of different exercise regimes in the diabetic population has been assessed in various studies in the context of improving glycaemic control or decreasing other risk factors, but only a few studies have been conducted on defining the role of proprioceptors training for improvising the balance among the diabetics.12 A few studies have been carried out for the improvisation of the balance system among this population using different regimes and combinations, such as targeting proprioceptors,13 using strengthening exercises, incorporating stretching as well,14 balance alone15 or in combination with aerobics16 but still there is a need to establish a specific treatment protocol using simple exercises challenging the proprioceptors in comparison to the use of electronic devices. The current study was planned to determine the effects of proprioception training on improving the balance in patients with diabetic neuropathy, and to find an association between the balance system and proprioceptors.

The quasi-experimental single-blinded study was conducted at the Department of Physical Therapy, Safi Hospital, Faisalabad, Pakistan, from August to December 2019. After approval from the ethics review committee of Riphah International University, Islamabad, the sample size was calculated on the basis of A-priori calculation using G-Power 3.117 at 80% power 95% confidence interval.

The sample was raised using consecutive sampling technique. Those included were male and female patients of type 2 diabetes and distal symmetrical polyneuropathy (DSPN) with the help of the Michigan Neuropathy Screening Instrument (MNSI).18 For the confirmation of diagnosis, nerve conduction velocity were checked for any variation in latency and amplitude of sural, peroneal and tibial nerves of the lower limb. A velocity of 39m/s was taken as the cut-off value.  Those included had no contraindication for engaging in physical activities, such as severe osteoarthritis (OA), uncontrolled diabetes, systolic blood pressure (SBP) >200mmHg or diastolic BP (DBP) >110mmHg, any acute illness or orthostatic hypotension. Patients with inability to walk independently, lower limb muscles in grade 3 on manual muscle testing, rheumatoid arthritis (RA), fibromyalgia, congenital or acquired malformation, vestibular system pathologies, intellectual disabilities or having psychiatric disorders were excluded. Patients were enrolled for exercise group A and control group B separately, and were not randomised. Baseline characteristics of the groups were matched. Static and dynamic balance was assessed using one leg standing (OLS) test with eyes open and closed, Berg balance scale (BBS) and timed-up-and-go test (TUGT). Literature has shown that these simple and easy-to-conduct tests lead to a comprehensive assessment of the balance system.19 Data was collected before and after the intervention.

Proprioception training programme (PTP) was implemented in group A and educational lecture on diabetes was used for group B. PTP was based on earlier studies,13,15 and was carried out for eight weeks, with two 60-minute sessions per week. It started with 10 minutes of warm-up activities when the subjects were advised to do light manual stretches and to step up and down on foam to get their body warmed up to have improve muscular flexibility. This was followed by 30 minutes of proprioceptive exercises targeting lower extremities. Proprioceptive exercises were divided into three components. The first component comprised standing on foam with eyes open and eyes closed and passing any object from one subject to the other for 10 minutes. the second component consisted of activity that was performed in groups of two. Throwing and catching a ball was performed while standing on foam for additional 10 minutes. The third component, throwing and catching a ball, was performed on trampoline to further challenge the balance system. After each set of 10-minute exercise, the subjects were given two-minute resting periods. In the end, 10 minutes were given for cooling down in which deep breathing exercises and static back extensor stretching exercises were performed to avoid fatigue or sudden hypoglycaemic attack, and to bring the heart rate back to the normal resting level.

The educational lectures on diabetes were delivered once a week for 40 minutes over eight weeks by a specialist diabetologist. The lectures comprised the types of the disease, consequences, complications, importance of foot care and the role of exercise in disease management. The control group B was only exposed to the awareness lectures.

At baseline, there were no significant difference between the groups with respect to OLS, BBS and TUG values (p>0.05) (Table-2). 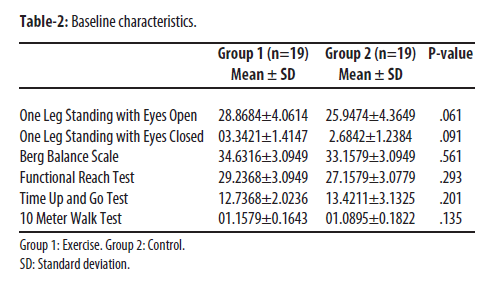 Significant improvement was observed post-intervention for BBS and TUGT in the exercise group (p<0.05), while the control group showed no significant results (p>0.05) (Table-4).

DM is a progressive, chronic, systemic disorder with high increase in prevalence across the globe which is anticipated to increase year by year. According to the World Health Organisation (WHO), more than 347 million people around the globe are diabetic and these numbers are expected to double or triple by 2030.20 Peripheral neuropathy is among the most prevalent complication, accompanied by balance deficits and increased risk of fall among patients with diabetic sensorimotor neuropathy.21 The disrupted link between the proprioceptors of the lower extremity and the nervous system leads in turn to postural instability, thus making the patient susceptible to increased fall risk.22

An important finding of the current study was improvement in the static balance depicted by increased score OLS with eyes open as the patient's ability to stand increased by 28% after proprioceptive training. A study reported improved static balance in the strength training group compared to the balance training group in only 6.3% patients. The finding showed that proprioceptive training exercises were beneficial in improving the static balance of the elderly.23 In the current study, significant improvement was found on all four tests in the exercise group.

In the present study, the exercise group showed 33% improvement in balance following proprioception training regime which was clinically significant.  A study showed similar results.24 The exercise programmes that mainly target the balance system are more beneficial in improving balance than those consisting of strengthening or stretching exercises.25 Significant improvement was demonstrated by reduced time taken by the patient in the exercise group on TUGT, depicting improved functional mobility in the present study. These findings are clinically significant as literature has revealed that compromised functional mobility of the geriatric population increases dependency by three to five times, and that a fundamental role is performed by good balance of the person to make one independent.26

The current study has limitations on sample size, which was small, even if it was sufficient to determine significance. Randomised clinical trials should be conducted along with large sample size and long-term follow-up.

Balance exercises were found to be an effective measure to improve dynamic balance in the elderly with diabetic neuropathy.