Frequency of limb salvage after infra-inguinal bypass for chronic limb-threatening ischaemia in diabetics: A retrospective study

A study was conducted to assess the number of limbs salvaged among diabetic patients with chronic limb-threatening ischaemia after infra-inguinal bypass surgeries at a low- to middle-income country (LMIC) hospital.

It was a retrospective chart review of diabetic patients who underwent infra-inguinal bypass for lower leg revascularisation for chronic limb-threatening ischaemia at the Section of Vascular Surgery, Aga Khan University Hospital, Karachi (Pakistan) from January 2008 till April 2019.

Diabetic patients with chronic limb-threatening ischaemia had a salvage rate of 90.5%(29/32) after infra-inguinal bypass surgery in our set up which is comparable to those described in the literature.

Clinical and epidemiologic studies have found diabetes mellitus to be an important risk factor for peripheral vascular disease.1 It is estimated that up to 25% of diabetics develop a foot ulcer during their lifetime, with rates of amputation 15 to 30 times higher than in non-diabetic patients. This higher risk is due to a combination of severe peripheral vascular diseases, neuropathy and infection in diabetic patients.2 It is very important to correct any vascular insufficiency in these patients before offering any minor or major amputation, as the wounds will not heal and the patient may need even higher amputations.

Many reports have shown that diabetics are at higher risk of revascularisation failures, limb loss, morbidity and mortality.3,4 On the other hand, many studies have reported excellent outcomes after infra-inguinal revascularisation for critical limb ischaemia.5,6

Infra-inguinal bypass is considered the 'gold-standard' for salvaging limbs in patients with chronic limb threatening ischaemia, as it is more durable as compared to endovascular interventions. Abu Dabrh et al conducted a systemic review and meta-analysis examining the effects of bypass surgery and endovascular interventions in patients with critical limb ischaemia. Bypass surgery and endovascular approaches did not have any significant difference on mortality and major amputations. They also found that better primary and assisted primary patency are more likely with bypass.7 However, the quality of evidence was low. It is also estimated that 25% to 30 % of the patients who undergo bypass do so after failure of previous interventions.8,9

Vascular surgery is relatively a new specialty in Pakistan with very few trained vascular surgeons. Patients also present late due to 'ineffective' referral system and due to the 'misconception' among the medical community that vascular reconstructions make any difference in salvaging limbs in these patients. There is limited data in loco-regional literature to disprove these concepts. We hypothesise that lower leg bypass in diabetics is as effective in salvaging limbs in our set up as in the developed world. The objective of the study was to assess the number of limbs salvaged with chronic limb-threatening ischaemia after infra-inguinal bypass surgery in diabetic patients in a low-to-middle income country (LMIC) hospital.

A retrospective chart review was undertaken of diabetic patients with chronic limb-threatening ischaemia who underwent infra-inguinal bypass surgery at the Section of Vascular Surgery, Department of Surgery, Aga Khan University Hospital, Karachi (Pakistan) from January 2008 till April 2019. 'Infra-inguinal bypass surgery' is defined as any major arterial reconstruction using a bypass conduit, either autogenous or prosthetic that originates at or below the inguinal ligament. Cases of 32 patients who met the inclusion criteria were reviewed, while patients who had undergone supra-inguinal revascularisation (aortoiliac/aorto femoral/fem-fem crossover bypasses), i.e. bypass graft arising above the inguinal ligament, were excluded from this study.

Only those patients who had extensive lesions, which are not amenable to percutaneous therapy, or who had failed endovascular therapy were considered for 'infra-inguinal bypass'. Trans-Atlantic Inter-Society Consensus Document Classification (TASC) type C and D lesions are considered extensive lesions.10 Usually, a combined decision is made by a team of operating surgeons, interventional radiologist and anaesthesiologist. The great saphenous vein (GSV) was our preferred conduit for these patients and pre-operative venous mapping was routinely done. If GSV was absent, unsuitable, or of insufficient length, ipsilateral short saphenous vein, contralateral great and small saphenous veins, and upper extremity veins were scanned and selected. We preferred the veins which were soft, compressible and of at least 3mm in diameter. In situations where limited veins were available, composite or prosthetic grafts were used. Most of the patients had conventional angiogram for visualising the potential target sites for the bypass. Whenever the common femoral artery was used as the site of origin of bypass, significant occlusive disease involving the origins of superficial femoral artery and deep femoral artery was assessed and if needed treated with femoral endarterectomy. Intra-operative graft patency was assessed by palpating distal pulse or by hand-held Doppler examination.

"Limb Salvage" was defined as preservation of enough of the foot to allow ambulation of the patient without the need for limb prosthesis, and included feet requiring toe, ray, or trans-metatarsal amputations or partial or complete calcaneus resections.11 Limb salvage was considered successful if major amputation did not occur within one year.

Bleeding was defined when the patient required two or more packs of blood transfusion or re-exploration for controlling haemostasis.

Wound infection was labelled if it was documented by the primary surgeon or in any patient where wound required re-opening or where there was a need of therapeutic antibiotics.

Perioperative mortality was death within 30 days of the index operation.

After discharge, the patients were followed at regular intervals. Initially they were assessed at one week and then every three months during the first year and later every six months. Follow-up was more frequent in patients with open wounds and after repeat surgical procedures.

After getting exemption from the ethical review committee, the patients were identified using the International Classification of Disease (ICD) coding. The data related to demographic, comorbidities, indications for intervention, inflow site, outflow site, conduit used, perioperative morbidity if any and operative mortality were collected using a pre-structured questionnaire.

SPSS version 22 was used to analyse the data. Continuous variables were presented as mean ± standard deviation or as median with interquartile range based on the normality of the data.

Categorical variables were presented as frequencies and percentages.

The relationship of the independent variables (such as demographic, comorbidities, indications for intervention, etc.) with the outcome (limb salvage and perioperative morbidity and mortality) were assessed by independent t-test/ Mann Whitney test (quantitative variables) and Chi-square/Fisher exact test (qualitative variable), where appropriate. A p value of < 0.05 was considered significant. 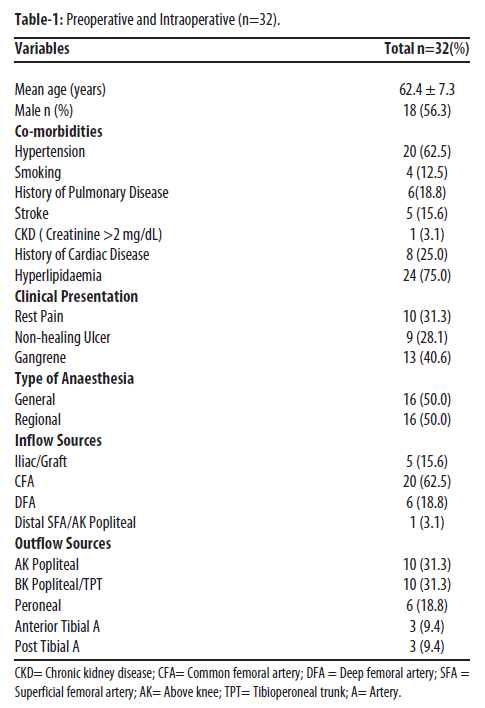 An equal number of patients had procedures under general or regional anaesthesia. The most common inflow site was common femoral artery 20 (62.5%), while the most frequent outflow sites were above and below the knee popliteal arteries — 10 (31.25%) at each site. Only 20 (62.5%) patients had adequate veins for reconstruction as autologous graft (Table-2). 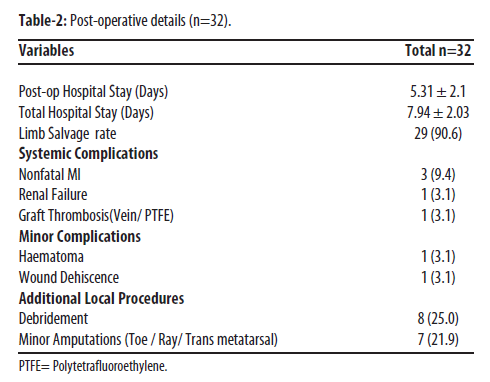 The limb salvage rate was 90.6% (29/32). There was no perioperative mortality. Three (9.4%) patients had nonfatal MI, 1 (3.12%) patient had arrhythmia and 1 (3.12%) had graft thrombosis. In all the patients, rest pain settled and the wound healed within three months of the index operation.

This is a case series of diabetic patients with chronic limb-threatening ischaemia undergoing infra-inguinal bypass procedures from a low- to middle-income country (LMIC) where 70 percent of the patients presented with tissue loss. There was acceptable perioperative morbidity and no 30-day mortality, while the limb salvage rate was 90.6% (29/32) which is within the range reported from the large series of the developed world.

The management of gangrene or ulcers in diabetic patients is more difficult than in non-diabetic patients. Diabetics are at greater risk of developing extensive and severe atherosclerosis. All patients with ulcers, gangrene or pain in the foot attributable to PAD should be considered for urgent care and should be referred promptly to a vascular specialist centre with expertise in treating these patients with multidisciplinary team approach. Conservative treatment for PAD in these patients has little role as more than 50% of the patients have major amputations without adequate revascularisation. The aim of revascularisation is provision of inline flow and this can be achieved both by endovascular and open interventions. Endovascular intervention is recommended for relatively short lesions (TASC A and B) but can be, and have been, attempted in extensive lesions (TASC C and D), especially surgically high risk patients. Patients with failed endovascular therapy and/or with extensive lesions can be managed by surgical bypass if they have ideally lower surgical risk and have suitable veins.

Heavy calcifications, infra-popliteal vessel involvement, long and multilevel lesions, frequently associated foot infection and associated medical comorbidity render diabetics at much higher risk of major amputation.12,13 Bypass surgery remains a more durable revascularisation option in relatively fit patients with expected life expectancy of > 2 years.13 Recent studies have shown excellent results with bypass surgery in diabetics, both in the short and long term.15-18 Limb salvage of patients with DM and peripheral vascular disease has been reported to be 85% at one year and 50% at five years.19 Twenty two (68.7%) of our patients presented with tissue loss similar to other studies.20 The limb salvage rate in our study is comparable to those reported in literature.13,17

The mean age in our study was 62.4 ±7.3 years and comparable with other studies. In the current study 56% of the subjects were men which is relatively lower than in other studies.

The most commonly involved segment was femoropopliteal as 20 patients had outflow at the popliteal artery (supra geniculate/infrapopliteal). These findings are consistent with the findings of Santos et al, who evaluated angiographic findings of 161 patients with chronic limb-threatening ischaemia. They did not find any difference between the disease pattern of diabetic and non-diabetic patients with critical limb ischaemia. The most commonly involved segment in that group was also femoropopliteal.21

Limitations of our study are that it was a retrospective study, from a single centre with missing data, temporality cannot be established and the findings cannot be generalised. There were limited number of patients. A prospective, well designed, multicentre study with larger number of patients can better refine these results.

Diabetic patients with chronic limb-threatening ischaemia had a salvage rate of 90.5% after infra-inguinal bypass surgery. This was achieved with acceptable peri-operative morbidity and is comparable with those reported from the developed world.

Disclaimer: None to disclose.

Funding Disclosure: Nothing to disclose.

5.      Hertzer NR, Bena JF, Karafa MT. A personal experience with the influence of diabetes and other factors on the outcomes of infrainguinal bypass grafts for occlusive disease. J  Vasc Surg. 2007; 46:271-9.