Methods: The cross-sectional descriptive study was conducted at the Radiology Department of Jinnah Postgraduate Medical Centre, Karachi, from November 2018 to April 2019, and comprised adult females who were divided into four equal ethnic groups. Frontal sinus X-ray radiography was done using the Water's view. Width, height and area of the right and left frontal sinuses were measured. The radiographs were saved in photograph format and measurements were done using RadiAnt DICOM software. Measurements of height, width and area were noted. Data was analysed using SPSS 23.

Every person in a society is known to others by some specific identity. The identification is important for various social and legal reasons. The challenge of identification of the unknown bodies becomes enormous once there are catastrophes as the bodies' configuration becomes damaged and devastated.1

There are three commonly used methods for the identification of unknown victims; soft tissue imaging, analysis of deoxyribonucleic acid (DNA), and the radiography of bony structures. The soft tissue imaging technique of finger printing employs the use of distinctive anatomical patterns in the fingers.1,2 The DNA interpretation of the sample can be achieved by the help of the soft as well as hard tissues. There are prerequisites for carrying out DNA analysis. The quality of the tissue has to be of certain type which does not affect the process of polymerase chain reaction (PCR). Disasters that result in high temperatures cause the chemical composition of the DNA to be changed and make the method inappropriate and unauthentic.3 Mass explosions and catastrophes often result in soft tissue loss. As a consequence, the soft tissue imaging and DNA analysis method become unsuitable. In circumstances of calamities that result in decomposition and even putrefaction of the bodies, the only possible option left is the use of radiography. Compared to other procedures, radiography is considered to be simple and cost-effective.4

The proof of identity is dependent on certain essential factors. Firstly, the structure should be of unique anatomical framework. Secondly, the structure should have the ability to remain constant and should not change over a period of time. Various softwares are available for record-keeping of personal details. Antemortem record-keeping serves as a key stone in identification of individuals with authenticity.5,6 The features available in postmortems are required to be comparable to antemortem data. Many methods can match the postmortem frontal sinus radiographs with that of the antemortem images. These include matching, superimposition and digital analysis methods.5,7,8

In Pakistan, disasters are on the rise. A report by the Global Terrorism Data (GTD) and Pakistan Emergency Database (EM-DAT) has mentioned that from 2003 to 2017, there were 45 natural and 289 human-oriented tragic incidents.11 Another report said the number of incidents involving tragic violence and mass explosions were on the rise from 2011 to 2015.12

The cross-sectional descriptive study was conducted at the Jinnah Postgraduate Medical Centre (JPMC), Karachi, from November 2018 to April 2019. After approval from the institutional ethics review committee (ERC) as well from the ERC of Bahria University Medical and Dental College, Karachi, the sample size was estimated using OpenEpi version 3 calculator.13 The sample size was based on population prevalence 50%, margin of error 5% and confidence interval (CI) 95%. The sample was raised using convenience sampling technique from among females aged 20-50 years who had no paranasal sinus disease. This particular age range was selected because frontal sinus is developed completely till the age of 20 and age-related changes occur after age 50.14 Those aged outside the specific age range were excluded and so were pregnant women and those having paranasal diseases or paranasal sinus surgeries. After taking informed consent from each participant, the sample was divided into Sindhi, Pathan, Punjabi and Urdu-speaking ethnic groups.

Demographic data of the research subjects was noted in a proforma. X-ray radiography (STEPHNEX machine) was used to measure dimensions of the frontal air sinuses. The view used was Water's view, also known as the occipito-mental view. Each subject was asked to stand erect while facing the detector (Figure-1). 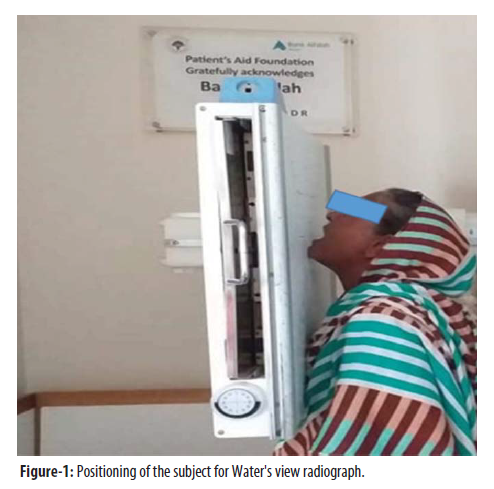 The chin was raised so that the mento-mandibular line became perpendicular to the receptor. The X-ray beam was placed horizontal at a point that was one inch above the region of the external occipital protuberance. X-ray beam was placed perpendicular to the radiographic plate. The X-ray beam was at an angle of 45 degrees to the orbito-meatal line. Each radiograph measured 10×12cm in size. The distance was 36cm from the source to film using an exposure of 125KVP at 630mA. The radiographs were saved in high-resolution Joint Photographic Experts Group (JPEG) file and were measured by the help of RadiAnt DICOM Viewer software. The measurements were done in accordance with the guidelines set in literature.8 Height, width and area were noted in the proforma. Each proforma was assigned a code number.  The linear measurements of the width and height were expressed in cm. The area unit used was cm2. 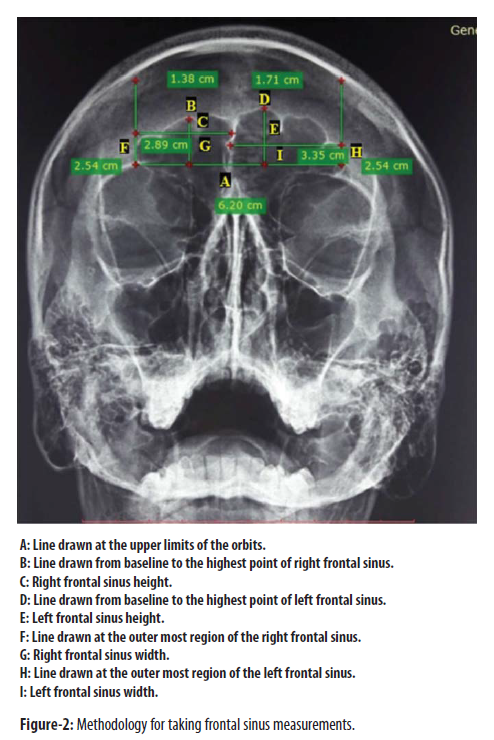 Data was analysed using SPSS 23. Distribution of data was checked using histogram and it was found to be normally distributed. Continuous data was represented as mean ± standard deviation. One-way analysis of variance (ANOVA_ was used to compare the parameters among the ethnic groups. P<0.05 was considered significant, and p<0.001 it was regarded as highly significant.

There were 108 females; 27(25%) in each of the four groups. The overall mean age was 35.14±8.68 years. Highly significant variability was found in terms of width, height and area in both right and left frontal air sinuses (p<0.001). In all measurements, the highest mean readings were recorded for the Pathan group and the lowest in the Sindhi group (Table). 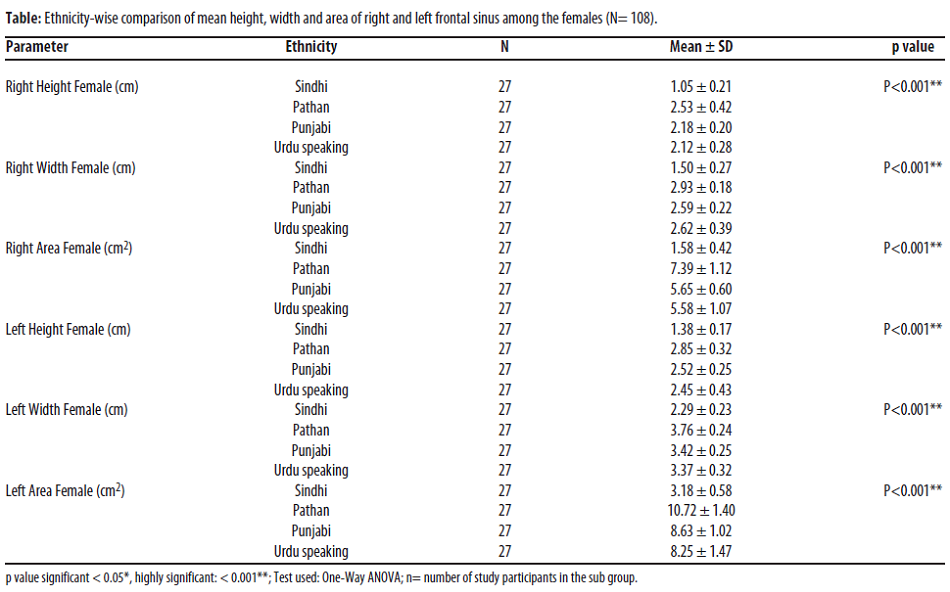 The present study observed that there existed variability in terms of dimensions of the frontal air sinuses among different ethnic group members living in Karachi. The highest dimensions were observed for Pathan subjects, followed by Punjabis, Urdu-speaking and Sindhi groups. Analogous variations were reported in studies conducted in different ethnic groups living in India.18,19 Unique anatomical features were also observed in relation to the frontal sinus height in studies conducted in Turkey.20,21 The variability of frontal air sinuses dimensions can be linked to the fact that every person's developmental anatomy is different. The quantity of diploe in between the two layers of the compact bone is variable. The amount of diploe represents bone mass that remains after absorption of bone. Since the reabsorption rate is inconstant, all the individuals develop certain characteristic features of frontal sinuses that are unique and distinguishing.9

In the current study, variability in terms of right frontal sinus width was noted among the participants. When the mean left frontal widths were compared, exclusive features that were characteristic for each individual were noted. On both sides, the highest values were calculated for Pathan group and the lowest ones for Sindhi group. Variances in terms of mean width was also observed in studies conducted in India.14,19 A study in India reported the association of metopism with the modification of structural anatomy of frontal sinuses. In all such persons, it was found that metopism hinders the developmental growth and expansion of the frontal air sinuses. As a result, the individuals develop asymmetrical frontal sinuses leading to unique frontal sinus anatomy.22 The distinction in anatomical features of widths in the present study could be linked to the variable pattern of pneumatisation in every individual. The creation of characteristic and unique air-filled spaces within the frontal bone is associated with differences in the size which is specific to each person.23

In the present study, dimensional variability in terms of the frontal air sinus area was also noted. Differences were also noted on the left side among the ethnic groups. On both left and right sides, the greatest values were recorded for Pathan group, followed by Punjabi, Urdu-speaking and Sindhi groups. Variances in terms of mean area were also observed in studies conducted in India.10,18 A study documented that the variable anatomical details could be due to the presence or absence of metopic sutures in the skull. It was mentioned that persons in whom metopic sutures persist after the normal age of closure are associated with small frontal sinuses and in those in which it is closed at the normal age of closure, the size of the frontal sinuses becomes bigger.24 There are many factors which contribute to the development and growth of the frontal air sinuses. A study in Thailand observed the effect of factors that influence the development of paranasal sinuses in identical and non-identical twins, and reported that there can be genetic influence on the expansion, extension and the overall development of the frontal sinuses. Besides, the variation in the right and left frontal air sinuses among the individuals could also be due to the presence and existence of inconstant environmental factors.25

The current study has limitations, as convenience sampling was used instead of probability sampling. Besides, it was conducted at a single centre in Karachi, and therefore, the results cannot be generalised.

There is a need to continue studying the phenomenon at multiple centres in order to include all the other ethnicities and to document the variations on a larger scale.

The frontal air sinus anatomy can be easily figured by observing Water's view radiographs. This radiographic view is commonly prescribed by doctors to rule out paranasal sinuses pathology. In our setup, there is no software available to save the radiographs of patients coming to the hospitals. If we develop a specialised system that can save Water's view radiographic records of the patients, it can later serve as an aid in the identification of charred and the severely-mutilated bodies after comparing the antemortem radiographs with postmortem radiographs.

Despite the limitations, the findings can be used for future studies in Pakistan. The current study, to our knowledge, is the first of its type in the country. This can be very helpful in the fields of forensic sciences and anthropology. The cost-effective procedure which was used to measure the dimensions of frontal air sinuses can be employed nationwide in determining the uniqueness of frontal sinuses.

Disclaimer: The text is based on an MPhil (Anatomy) thesis.