Method: The randomised controlled trial was conducted at the Women Institute of Rehabilitation Sciences, Abbottabad, Pakistan, from July to December 2019, and comprised subjects aged 18-30 years having active trigger points in rhomboid muscle. The subjects were randomised into experimental group A and control group B. The eperimental group received thoracic manipulation along with conventional physical therapy, while the control group only received conventional physical therapy. The intervention lasted 2 sessions per week for 3 weeks. Pre- and post-intervention assessment was done with numeric pain rating scale, algometry, inclinometer and the neck disability index. Data was analysed using SPSS 20.

Clinical Trial Number: This trial was registered at www.ClinicalTrails.gov with registry number NCT04179214.

Myofascial trigger points (TrPs) are one of the major causes of interscapular pain. TrPs are defined as hyperirritable regions associated with a taut band of a skeletal muscle that are painful on stimulation, like direct contraction, compression or stretching, of the affected muscle, producing referred pain distant to the region of trigger point.1 Poor posture causes dysfunctional tone of musculature around the cervico-thoracic region, including rhomboid major and minor amongst many others. Abnormal postural variations lead to stress on muscles and articulating surfaces, like cervical nerves 4-5 (C4-C5) and thoracic nerves 4-5 (T4-T5), resulting in muscular imbalance, pain and restricted range of motion (ROM).2

Myofascial pain occurs due to many factors, including poor posture, altered biomechanics of body, lack of exercise, psychosocial factors and acute or repetitive trauma.3 Likewise, joint dysfunctions are also contributory to the development of myofascial TrP (MTrP).4 When TrPs develop in the rhomboid muscles, pain is felt along the medial border of scapula.5 There may be snapping, grinding or crunching sounds when the scapula is moving.5 Correcting joint dysfunctions in the thoracic spine can have positive effect on TrPs in rhomboid muscles.4 There are various effective manual therapy interventions, one of them being spinal thrust manipulation.6 Thrust manipulation is low-amplitude and high-velocity procedure directed at a target joint characterised by a single, short-duration thrust. The thrust may result into cavitations or some audible sound.7 Although there is still no known mechanism underlying the pain-modulatory effects of spinal manipulation. However, recent studies have suggested that neurophysiologic mechanism is mainly responsible for the observed pain-modulatory effects of spinal manipulation, mediated by spinal, peripheral and supraspinal structures.8 According to studies, by applying spinal manipulation, various neurochemical responses occur in the central and peripheral nervous system. These changes include muscle-reflexogenic responses, somatosensory processing, central motor excitability, neuroplastic brain changes, motor neuron activity, sympathetic activity, central sensitisation and Hoffmann's reflex (H-reflex) responses.8

There is abundance of literature for upper trapezius TrP management. So, based on both, literature suggests that about 45.5% myofascial TrPs are found in rhomboid muscles in patients with upper back pain, and  clinical observations.9

The randomised controlled trail (RCT) was registered at www.clinicaltrials.gov. with registry number NCT04179214 conducted from July to December 2019 at the Women Institute of Rehabilitation Sciences, Abbottabad, Pakistan, and comprised subjects aged 18-30 years having active TrPs in rhomboid muscle who were enrolled using non-probability purposive sampling technique.10 After approval from the institutional ethics review board and the research ethics committee of Riphah International University, Islamabad, the sample size was calculated using OpenEpi version 3 with 95% confidence interval (CI), power 80%, ratio of groups 1, and mean difference 1.99 of variable numeric pain rating scale (NPRS) score.11 Those included were individuals with forward head posture, cranio-vertebral angle (CVA) < 48°, having interscapular chronic or subacute pain due to active TrPs in rhomboid muscle and segmental hypomobility in upper thoracic region. Those with any contraindication to manipulation, open wounds or trauma to the area that needed <2 months prior treatment, neurological compromise, mild scapular pain due to degenerative process or osteoporosis were excluded.

After taking written informed consent, the subjects were randomised using coin flipping to experimental group A or control group B. Sealed envelopes were made mentioning the group of each participant. The blinded participants then individually received the envelope containing their name and the group.

To screen for hypomobility of spinal segments, springing test (kappa=0.71) was applied.12 Myofascial diagnostic scale (MDS) was used to confirm the presence of TrPs.13 Out of six TrPs, the one with more intense pain in the rhomboid muscles was identified and marked with ink pen in sitting position.4 Forward head posture was measured using protractor tool through CVA. Pain was measured through NRPS (r=0.96).14 Thoracic ROM, flexion and extension was assessed by inclinometer. Digital pressure Algometre is a valid and reliable tool for measuring sensitivity of MTrP. It is a hand-held electronic device used to measure the least pressure needed to produce pain, i.e., pain pressure threshold (PPT).15 The score of Neck disability index (NDI) English version (intra-class correlation coefficient 0.88) was calculated to measure functional disability.16

In group A, the therapist provided screw manipulation along with manual pressure release (MPR) and general exercises (GEx). In screw manipulation technique, the vertebral transverse processes were forced from posterior to anterior direction. The direction of the manipulation was identified by applying springing test to the adjacent spinous process to determine the painful and stiff segment. The hand placement was like one pisiform on the right facet of the above, and the other pisiform on the left facet of the below vertebrae.17 The tissues were then preloaded, and slack was taken up. The thrust applied directly toward the patient once the patient completely exhaled.17 The control group B was provided with only MPR and GEx. In MPR, the pressure was applied with the thumb over the identified TrP in the rhomboid. The pressure was non-painful, applied at slow rate, and was maintained until release of tissue barrier. Further pressure was increased to reach a new barrier. The same procedure was repeated until decreased tension or tenderness of TrPs.18 GEx, like stretching of pectoral muscles, levator scapula, upper trapezius and strengthening of rotator cuff muscle and rhomboids, were administered in 3 sets, with 10 reps 3 days per week for 3 weeks.19 Assessments were taken at baseline and post-intervention. Data was analysed using SPSS 20. Based on Shapiro Wilk normality test, parametric and non-parametric tests were applied. Mann Whitney U test was applied for comparison between the groups for pain, thoracic flexion and PPT score, while Independent t test was applied for thoracic extension and NDI at pre- and post-intervention. Wilcoxon signed rank test was applied for intra-group analysis in the control group for pain, thoracic flexion range and thoracic extension. In the experimental group, Wilcoxon signed rank test was applied for pain, thoracic extension, PPT and NDI. Paired t test was applied for intra-group analysis for NDI and PPT in the control group and for thoracic flexion in the experimental group. P<0.05 was considered significant. 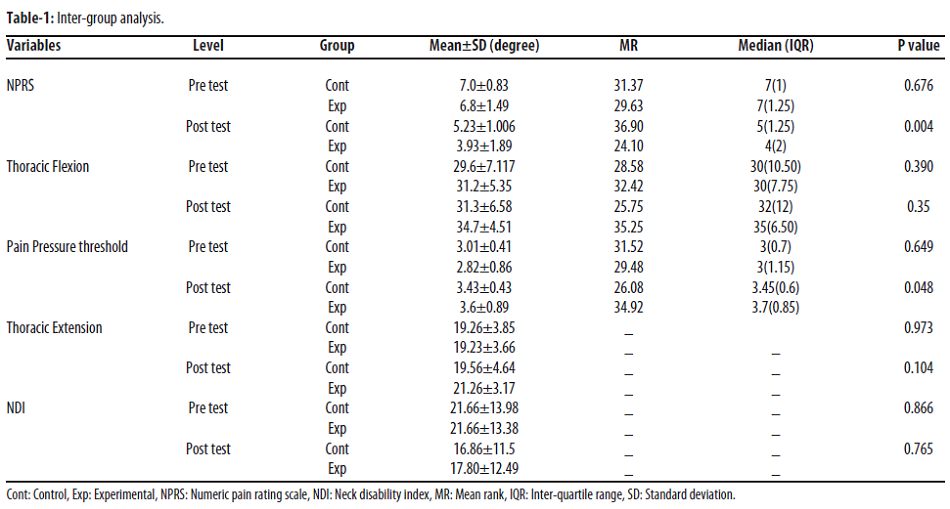 Further analysis showed there was significant change (p<0.05) from baseline values in all variables except NDI (p>0.05) (Table-2). 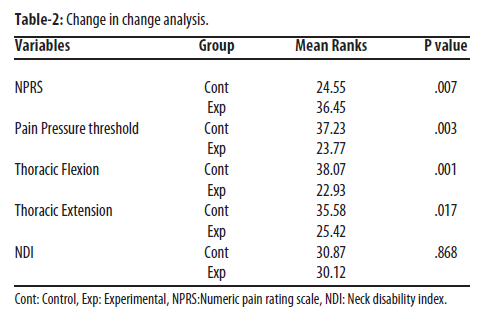 Although both the groups showed significant improvement, the experimental group had better results in the current study.

Interscapular pain reduction by thoracic manipulation ™ in the present study was in close agreement with earlier results.13 Likewise, an overall improvement of 83.6% on visual analogue scale for interscapular pain was reported by another study after chiropractic spinal manipulative therapy, but it targetted infraspinatus along with rhomboids.4 Another study strengthened the evidence of cervical manipulation and TM as effective techniques for cervicobrachial pain management.20 The current study showed significant increase in terms of PPT (p<0.05) by the application of TM. These results were supported by earlier findings.13 PPT of rhomboids, measured by digital pressure algometer in another study, also significantly improved.4 The current study's PPT findings are comparable to another study where rapid increase in PPT level of TrPs in masseter and temporalis muscle was noted by applying atlanto-occipital thrust manipulation along with  increase in active mouth opening.21

In terms of limitations, the current study was single-blind as single-centre, and only one most active TrP of rhomboid muscle was treated. Further studies targeting infraspinatus muscle and on other regions of spine should be conducted to strengthen quality evidence of the effect of manipulation on associated trigger points. Also, more objective measurements, like electromyography (EMG) readings providing muscle activity information by stimulating mechanoreceptors, shall be added in future.

Upper thoracic spine manipulation was found to be more effective in treating interscapular pain and pain pressure sensitivity of MTrPs in the rhomboid muscle.

Disclaimer: The text is based on an MS thesis.

8.      Gyer G, Michael J, Inklebarger J, Tedla JS. Spinal manipulation therapy: Is it all about the brain? A current review of the neurophysiological effects of manipulation. J Integr Med. 2019; 17:328-37.

13.    Segeel M. The effect of chiropractic adjustive therapy and dry needle therapy in the treatment of inter-scapular pain due to active rhomboid minor and major trigger points: Doctoral dissertation, Johannesburg: University of Johannesburg, 2008.