Autoimmune thyroid disease in children with diabetes and adolescents: A single center study from south Punjab

Objective: To evaluate the prevalence of autoimmune thyroid disease in children with diabetes.

Methods: The descriptive cross-sectional study was conducted from January to December 2019 at the Children Hospital and the Institute of Child Health, Multan, Pakistan, and comprised paediatric type 1 diabetes mellitus patients of both genders. Blood samples were obtained for detailed testing of thyroid functions tests. Data was analysed using SPSS 20.

Conclusion: The prevalence of autoimmune thyroid disease among children and adolescents with type 1 diabetes mellitus was 21%, with hypothyroidism being more prevalent compared to hyperthyroidism.

The prevalence of thyroid disease in children with diabetes and adolescents varies from 10% to 24%.3,4 The appearance of thyroid peroxidase antibody (TPO-Ab) and thyroglobulin antibody (TG-Ab) in T1DM precedes thyroid dysfunction. Both these antibodies can be used as a diagnostic marker for autoimmune thyroid disease (AITD). Screening for anti-thyroid antibodies in T1DM may help in the early detection of autoimmune thyroid disorders. There is no consensus on screening for AITD in patients with T1DM.5 It is also known that AITD increase with the advancement of age.6

The current study was planned to evaluate the prevalence of AITD in TIDM children and adolescents.

The descriptive cross-sectional study was conducted from January to December 2019 at the Children Hospital and the Institute of Child Health, Multan, Pakistan. After approval from the institutional ethics review committee, the sample size was calculated on the basis of 17% prevalence of thyroid antibodies,6 using the formula for single proportion with 95% confidence level and 6% margin of error. The sample was raised using consecutive sampling technique from among children and adolescents aged 2-15 years of either gender with T1DM. Those already on thyroid medication and with any acute febrile illness were excluded, and so were those with other autoimmune diseases or secondary diabetes mellitus.

After taking informed consent, detailed history of each patient was taken, including date of visit, name, age, gender, age at which T1DM was diagnosed and its duration. Symptoms suggestive of hypothyroidism, like coarse facies, lethargy, cold intolerance, swelling in front of neck, constipation, pubertal delay, and of hyperthyroidism, like palpitations, emotional liability, heat intolerance, weight-loss, exopthalmos etc., were specifically noted. 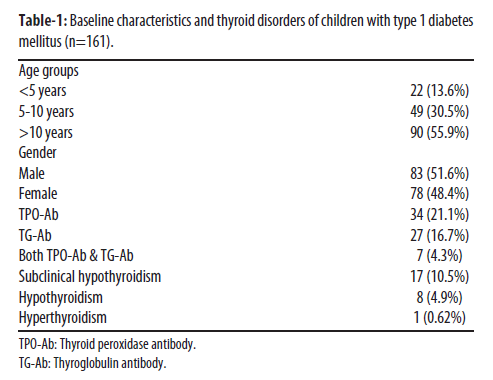 Duration of diabetes was associated with AITD. TPO-Ab and TG-Ab were seen more in subjects with diabetes duration <5 years compared to those with >5 years (Table-3). 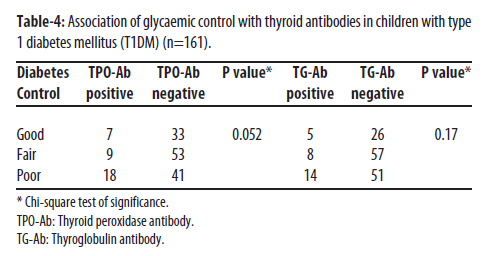 To the best of our knowledge, this is the first study looking into prevalence of autoimmune thyroid disease in diabetic children and adolescents in Pakistan's southern Punjab region. The level of positivity of TPO-Ab, Tg-Ab and of the two antibodies together shown in the current study are consistent with earlier studies.10-13 It is not known whether these antibodies are directly responsible for the pathogenesis of thyroid disease or are the result of destruction mediated by T-cell infiltration in the thyroid. However, a study14 observed that patients with an increase in TSH and auto antibodies progressed more frequently to thyroid disease.

One or more thyroid antibodies was positive in majority of diabetic patients, which was similar to other studies.15,16 Thyroid antibodies are strongly associated with future risk of thyroid disease.17 TSH level was high in 15.4% of patients and all were positive for thyroid auto antibodies. A study18 reported clinical hypothyroidism in 2.8% T1DM children, while the current data showed it in 4.9%. The presence of subclinical hypothyroidism varies 3-11%19 in literature. In the current study, it was on the higher side at 10.5%. The prevalence of hyperthyroidism reported in literature varies from 0.5% to 6%,20 while in the current study it was 0.6%.

Autoimmune thyroid disease is also associated with age and duration of diabetes. It was more common in adolescent age group 10-15 years and <5 years' duration of diabetes, which is in line with literature.21 Glycaemic control also affects the prevalence of AITD.22

One of the limitations of the current study is that thyroid antibodies were performed once with no interval levels. Children with negative thyroid antibodies may develop these over a period of time. Annual antibodies level in children with T1DM would reflect better prevalence of autoimmune thyroid disease. Being a cross-sectional research, the study also lacks information on thyroid autoimmunity before and between the diagnosis of T1DM, leading to failure in establishing the causal association.

There was a high prevalence of thyroid abnormalities in the current sample from southern Punjab. Hypothyroidism was more prevalent in children compared to hyperthyroidism. Thyroid function tests and thyroid antibodies in all children and adolescents with T1DM should be checked regularly.