Method: The prospective longitudinal study was conducted from May 2016 to October 2017 in Bhakkar city of Punjab, Pakistan, and comprised schoolchildren aged 12 years. The caries progression rate was measured using the Modified Beck's method or adjusted caries increment. The response rate at baseline and at each follow-up was compared. Bonferroni correction was used to compare baseline mean caries increment with caries increment at 6, 12 and 18 months. Data was analysed using SPSS 17 and Stata 14.

Results: Of the 226 subjects enrolled, 183(81%) were present at the last follow-up. However, only 147(65%) subjects were available for all the four measurements. Significantly high caries increment among cavitated lesions was observed at all the three follow-ups compared to the baseline (p=0.0001).

Pakistan is a developing country where oral health care (LHC) services are more focussed on treatment, and it is unable to treat the rapidly spreading dental disorders, such as caries.1 A pathfinder survey conducted in 21 districts of Pakistan reported that the prevalence of dental decay in 12-year-old children was 50% with a low mean Decayed, Missing and Filled Teeth (DMFT) score of 1.38.1,2 Recent studies conducted on isolated populations also reported low mean DMFT score among Pakistani 12-year-old children. A cross-sectional study conducted in public school children of Lahore reported a mean DMFT score of 1.97±2.91 among boys and 1.53±2.63 among females.3 Similarly, another cross-sectional study conducted on 11-12-year-old public and private school children of Bhakakr reported a mean DMFT score of 2.69±1.7.4

Existing literature has shown a relationship between mean DMFT scores and caries progression. In the case of low mean DMFT score, the rates of progression are slower, while they are more rapid in a population with high DMFT scores.5 The rate of caries progression through the enamel into dentine plays a vital role in determining the frequency of dental recall.5 Limited studies are available providing data regarding caries increment in 12-year-old children residing in South Asia. A longitudinal study in south-east China among 3-4-year-old preschool children assessed the incidence of dental caries until the children reached aged 5-6 years. At first follow-up, the caries increment was 1.1±1.7 and on second follow-up it was 0.7±1.1. The caries increment was measured only among cavitated lesions.6

In Pakistan, cross-sectional studies reporting dental caries prevalence in school children are available, but there is a need for longitudinal data which provides reasonable estimates of dental caries increment.9 The current study was planned to fill the gap by determining the caries increment rate in children to establish appropriate dental recall interval.

The prospective longitudinal study was conducted from May 2016 to October 2017 in Bhakkar city of Punjab, Pakistan. Treatment planning of cavitated and non-cavitated lesions in the study subjects was based on the International Caries Classification and Management System tooth-preserving operative principles (ICCMS-TPOP).10

After approval by the medical ethics committee of the Faculty of Dentistry, University Malaya, Kuala Lumpur, Malaysia, the sample size was calculated based on the effect size mentioned in literature.11 The formula used for the estimation was n = (Za/2 (1.96) + Zb (0.84) / ES (0.20)2.12 The sample was enhanced to account for 15% attrition.

Of the 200 schools in Bhakkar, 7 schools with the highest student enrolment were conveniently selected. List 11-12-year-old students was obtained from each school and all of them were invidted to participate. Those included were students of both public- and private-sector schools aged 12 years who were able to understand basic instructions. Children aged below or above 12 years, those with acquired physical disabilities and those receiving orthodontic treatment were excluded.

The permission to conduct the study in public-sector schools was obtained from the district education officer, while for private-sector schools, permission was sought from the respective administration. Children were selected after obtaining signed parental consent.

During the examinations, children identified with cavitated carious lesions or in need of any urgent care were referred to the nearest district headquarter (DHQ) hospital, while non-cavitated lesions were treated by way of improving oral hygiene and behaviour modification.

After baseline examination three follow-up visits were conducted with an interval of 6 months each. The intraoral examinations were carried out within the school premises.

Caries measurements were carried out using the Modified International Caries Detection and Assessment System (ICDAS) index and the World Health Organisation (WHO) methods.13 The modified ICDAS index can measure progression of carious lesions. In Modified ICDAS, for non-cavitated lesions, codes 1 and 2 were merged and named as code A, as it was not possible to dry tooth surfaces with compressed air at the study site.14 Codes 3-6 indicated cavitated carious lesions.

A single examiner underwent training and calibration procedures for ICDAS II14 index for which the calibration process was carried out over two days with a time interval of one week on 62 mounted teeth, which have been coded by the Malaysian ICDAS taskforce group. Teeth were recorded as follows: 0 = sound; 1 = first visual change in enamel seen after drying; 2 = distinct visual change in enamel; 3 = localised enamel breakdown; 4 = underlying dark shadow from dentine; 5 = a distinct cavity with visible dentine; 6 = an extensive distinct cavity with visible dentin.14 Acceptable levels of inter-examiner (0.69) and intra-examiner (0.82) kappa scores were achieved during the calibration for ICDAS II.15

Caries increment among cavitated lesions was measured using Modified Beck's method or Adjusted Caries Increment (ADJCI).16 The unit of observation used was tooth surface, and a score was given based on their transition. Score 0 was assigned to the transitions associated with missing teeth due to caries to prevent over-estimation of increment. Three transitions were used to measure caries increment progression, regression and non-regression.

The count of surfaces with progression, regression and no change were inserted into the formula to calculate ADJCI value at the child level thus:16

ADJCI= Progression × no progression nor regression

Regression + no progression nor regression 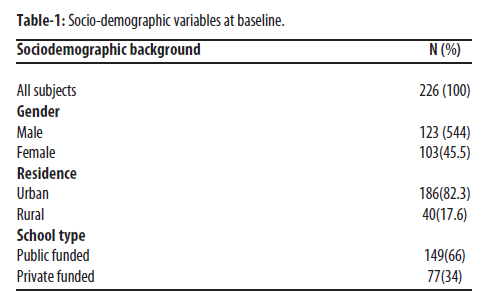 However, only 147(65%) subjects were available for all the four measurements (Table-3). 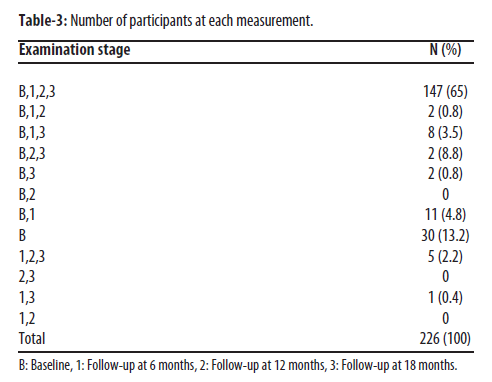 In our study, as the mean DMFT score increased, the percentage of children with caries also increased. The increase in the prevalence of caries indicates the increase in the risk of caries development.11 In our study, the mean caries increment rate in the cavitated lesion was low at all follow-ups. Evidence also suggests that caries progression rates are lower in a population with low mean DMFT scores and vice versa.11

In the current study, when the caries increment rate was calculated by combining non-cavitated and cavitated lesions, significantly higher caries increment was observed at all follow-ups. This indicates that inclusion of non-cavitated lesions increases the caries experience and the caries increment as well. The WHO methods underestimate caries by recording only dentinal lesions and exclude early caries which later progresses into lesions requiring restorative treatment. In Pakistan, where available resources are limited, the best approach is to record early caries that can be treated by applying fluoride, glass ionomer cement and fissure sealants to reduce the need of restorative treatment.8

The only study providing caries increment by merging non-cavitated and cavitated lesions was conducted in 2011.16 However, the comparison with that study was not possible because its assessments were carried out only on primary dentition.

Despite several actions taken to ensure the participants' presence on the examination day, the dropout rate was high in the current study at about 35%. For health researchers, it is suggested that if a proportion of missing data is more than 5%, the appropriate approach is to employ multiple imputations.19 This was done in the current study.

The strength of the current study is that the rate of caries progression was measured using adjusted caries increment rate, which can adjust biologically plausible and non-biologically plausible reversals.16 Another strength is that it accurately depicted caries progression rate because the caries increment was evaluated by merging non-cavitated and cavitated lesions.

Future studies should categorise individuals according to caries risk categories.

Caries increment in cavitated carious lesions was low, while high increment was observed when non-cavitated lesions were merged with cavitated ones.