Objectives: To study the relationship between dysfunctional schema modes and post-traumatic stress disorder among trauma survivors.

Trauma is a stressful, upsetting event that restrains personal skills and abilities to cope, which may cause helplessness and hopelessness in individuals. These physical injuries may also fetch emotional and psychological disorders, like post-traumatic stress disorder (PTSD), anxiety and depression.

Schema is a subjective concept comprising emotions, memories, beliefs and broad pattern of cognitions that provide a guideline to behaviour. It develops in early childhood and matures over time. Personal traits and cultures may also play important roles in schema development and activation.1 A maladaptive schema consists of multiple modes, such as the child mode and the maladaptive punitive parental mode. Similarly, those in adaptive modes are children who are happy and adults who are healthy.1 The concept of schema modes is related to core beliefs that direct our cognitive-emotional and behavioural perception. Biased negative beliefs about the world make us more vulnerable to depression. In the same way, over- and under-developed beliefs may also cause depression and anxiety.2 In this regard, it is important to study any correlation between the core beliefs of patients and brain and orthopaedic injury.

Maladaptive schemas are associated with a variety of psychopathology generally in individuals with history of interpersonal trauma. Such psychological disorders include depression and anxiety,3 self-harm behaviour,4 eating disorder,5 social phobia,6 attachment and personality disorder.7,8 Moreover, the relationship between early maladaptive schema (EMS) and PTSD has been established in both men and women health workers having history of trauma, with four maladaptive schemas, including dependency, defectiveness, enmeshment and failure, significantly predicting PTSD.9

In addition, PTSD is a mental health condition that may develop in some individuals after experiencing life-threatening events, such as accidents, assaults, and natural or man-made disasters.10 According to the Diagnostic Statistical Manual version 5 (DSM-5), PTSD is characterised by a variety of behaviours, such as intrusive symptoms, negative cognition, avoidance and hyper-arousal. Intrusive symptoms include flashbacks and repetitive memories, instances of negative cognition involve blaming oneself, and not being able to concentrate. Similarly, avoidance symptoms include the suppression of distressing thoughts, whereas with hyper-arousal individuals might become aggressive and engage in destructive behaviours.10 Clinicians can diagnose PTSD when all of these symptoms occur for more than one month post-trauma. In the same way, if symptoms persist for more than three months, the condition is considered chronic PTSD. If symptoms do not appear until six months post-trauma, the patient is diagnosed as having a delayed onset of PTSD.10 PTSD can lead to additional behavioural disabilities, including social problems, intimacy problems, educational issues, and work-related issues, and functional disabilities, including problems with memory, concentration and decision-making.11

The risk of psychiatric symptoms like those of PTSD are remarkably associated with instances of orthopaedic trauma and traumatic brain injuries (TBIs). These may restrain the rehabilitation process related to physical as well as socio-emotional health of an individual.12,13 The change in maladaptive schema modes is a PTSD consequence. Therefore, dysfunctional schema and related problems in PTSD have recently gained importance in behavioural research.14,15 It has been observed that EMSs eventually manifest as a constellation of personality traits. A study showed that the occurrence of maladaptive schemas were higher in people with PTSD symptoms than those having other mental illnesses.14 Another study found EMS among veterans in Australia and New Zealand who suffered from PTSD, and the same was the case among French prison officers.14,16

Pakistan is a developing country with a high number of trauma survivors than in the developed countries owing to continual exposure to terrorism and violence in the last few decades. The current study was planned to study the relationship between dysfunctional schema modes and PTSD among trauma survivors in the Pakistani context.

The cross-sectional study was conducted at the Pakistan Institute of Medical Sciences (PIMS), Islamabad, Pakistan, from March to August 2019. After approval from the institutional ethics review committee, the sample size was calculated while assuming 0.3 prevalence of PTSD among trauma survivors with a precision of 0.04 and confidence level 95% by using the formula n=z2 P(1-P)/d2.17 The sample was rasied using purposive sampling technique.

Demographic data as well as injury types were noted.

A short Urdu version of the Schema Mode Inventory (SMI) consisting of 124 items was used to assess maladaptive and adaptive schema modes.18 It had a six-point rating scale, and is used for both educational and clinical purposes, having a good discriminatory value, convergent validity and internal consistency for all sub-scales with Cronbach's alpha ranging from 0.76 to 0.96.

Also used was the Clinician Administered Post-Traumatic Stress Disorder Scale version 5 (CAPS-5) which has 30 items: 20 for PTSD symptoms, 2 for the onset of symptoms, 3 to measure social and occupational distress, 3 for global improvement and validity, and 2 items are for dissociative subtypes. It has a five-point 0-4 rating to assess the severity of all items. CAPS-5 is available in past week, past month, and worst month versions,19 and takes about 45-60 minutes to complete. Some items on CAPS-5 are related to trauma and determine whether PTSD symptoms are attributed to the existing trauma.

Psychometric assessment showed that both the Urdu version of SMI and CAPS-5 had internal consistency with alpha reliability >0.7 in the current study. Skewness and kurtosis values for both the scales indicated that data was normally distributed. Potential range of the scores showed that there were no outliers in the data.

Data was analysed using SPSS 23. Mean and standard deviations (SDs) were calculated for continuous variables. A t-test was used for different study variables. Analysis of variance (ANOVA) and simple linear regression were used for evaluating associations between maladaptive schema modes and PTSD. P<0.05 was considered significant. 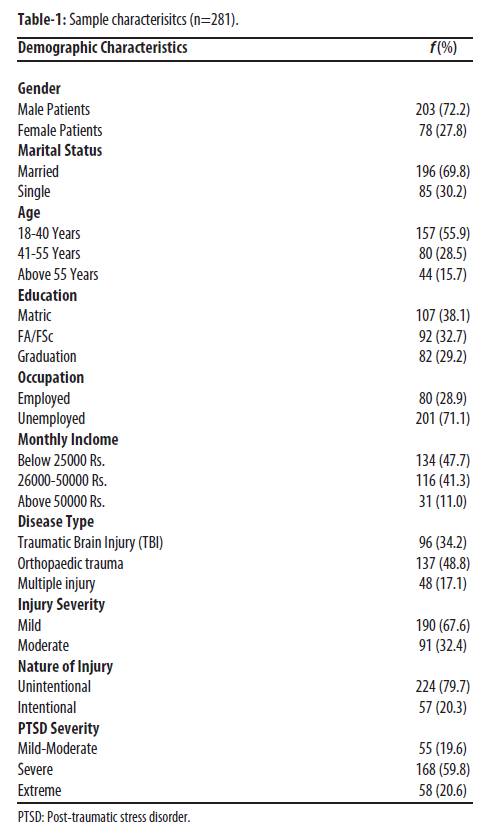 Differences in PTSD symptoms, maladaptive schema modes and adaptive schemas were statistically non-significant for other variables like disease nature, education and occupation (Tables-3, 4).

In terms of limitations, the current study was conducted at a single tertiary care hospital, and the results may not be generalisable to other parts of Pakistan. Additionally, various demographic informations of the sample may have also affected the results. Besides, the schema inventory is used only with relation to clinical samples, and the findings should not generalised to non-clinical populations.

Future studies should assess the moderating role of disease severity and gender on the association between maladaptive schema modes and PTSD symptoms among trauma survivors.