Objective: To determine the correlation of cardiorespiratory fitness with screen time and physical activity in healthy adolescents.

Method: The analytical cross-sectional study was conducted at the Foundation University, Islamabad, Pakistan, from February to July 2019, and comprised healthy adolescents aged 11-17 years of both genders who were enrolled from various schools of Rawalpindi and Islamabad. Cardiorespiratory fitness was evaluated through YMCA 3 min Step test, physical activity levels were evaluated using physical activity questionnaire for adolescents, and screen time was evaluated using Healthy Lifestyle in Europe by Nutrition in Adolescence screen time questionnaire. Data was analysed using SPSS 21.

In the 21st century, physical inactivity has been acknowledged as one of the major public health problems, chiefly due to the emergence of sedentary lifestyle in children and adults.1,2 Approximately 2 million deaths worldwide were documented annually because of physical inactivity, according to the World Health Organisation (WHO).3 In developing countries, overweight/obesity is an emerging epidemic, as the individuals are opting for more sedentary lifestyles with increased screen time (ST) and altered dietary habits which also contribute to a decrease in their physical activity (PA) levels. Also, low PA levels play an active role in excessive weight-gain in adults.1

Childhood and adolescence are critical stages of life when vivid changes in psychological and physiological functions take place. It is also a stage of establishing various behavioural patterns and personal lifestyle choices, including the choice to be physically active or otherwise.4 There is both a direct and an indirect positive effect of youth PA on adult health, and from adolescence to adulthood, which proposes that we need to encourage PA early in life.5 Many studies favour the fact that there is an improvement in muscular fitness, cardiorespiratory fitness (CRF), body composition, metabolic health biomarkers and bone health among adolescents engaging regularly in adequate PA.6

Physical fitness is a combination of several physiological characteristics which can be improved through enhancing PA levels.7 There are five key elements of physical fitness; body composition, CRF, flexibility, muscular strength and muscle endurance.8 Among these, the component most significantly linked to disadvantageous health risks is CRF, or aerobic power, as checked by maximal and submaximal exercise testing. Maximal oxygen (O2) consumption (VO2max), which can be achieved while doing a graded submaximal-to-maximal exercise-to-voluntary-fatigue has been established as the single best marker of CRF by the WHO.9 In addition to other physiological parameters, post-exercise heart rate (HR) is known to be a strong predictor of CRF. Reference system for mean post-exercise HR following a 3-minute step test is usually done to estimate CRF via field-based test.10

Another crucial factor affecting CRF is sedentary behaviour. Using screen devices and the total time spent watching television, playing computer games and video games on personal computers (PCs) and mobile phones come under the category of sedentary behaviours in adolescents.11 Time spent in screen-based sedentary behaviour for non-school-related purposes, television, videos, digital versatile discs (DVDs), video games and computers has deleterious effect on multiple components of adolescent health.12 Researchers have found a considerable increase in daily ST in every subgroup by age and the probability of having ST >2 hours/day.13 Individuals not involved in moderate to vigorous PA (MVPA) indulge in sedentary lifestyle and, hence, have a higher incidence of being obese.14

As per literature about the association of PA and mental health in children and adolescents, mental health and body growth in adolescents is negatively affected by sedentary lifestyle, physical inactivity and increased ST.15

The current study was planned to determine the correlation of CRF with PA and ST in healthy adolescents.

The analytical cross-sectional study was conducted at the Foundation University (FU), Islamabad, Pakistan, from February to July 2019. After approval from the institutional ethics review board, the sample size was determined using Raosoft while keeping margin of error 5% and confidence interval (CI) 95%.16 The sample was raised using non-probability convenience sampling technique from among students at various schools of Rawalpindi and Islamabad after permission was taken from respective administrations. Those included were healthy adolescents aged 11-17 years of both genders who were able to communicate effectively and follow instructions. Those with any type of apparent musculoskeletal or neurological deformity, any congenital deformity and those not willing to participate were excluded.

A special consent form was designed explaining the purpose of conducting this research project. For participation in the study, permission was taken from the parents/ guardian of the students via a consent form sent through the school authorities. The data gathered for this study was accessible only to the primary investigating team, thus ensuring confidentiality and anonymity for all participants. Data was collected related to demographics. Body weight (kg) and height (m2) of each participant was recorded using weighing machine (Certeza GS-810) and a simple inch tape. For the measurement of weight, the subjects stood barefoot on a standard digital weighing scale. For the measurement of height, the subjects were made to stand against the wall without shoes in anatomical position. It was made sure that the occiput, buttocks and heels were touching the wall before recording the height by the measuring tape. It was measured in inches, and was later converted into meters. On the basis of this data, body mass index (BMI) was calculated for each participant using the standard procedure of weight (kg) / height (m2).

CRF data was obtained using the YMCA (Young Men's Christian Association) 3-min step test (YMCA 3MST)10 which requires stepping on and off on a customised bench at a set speed for 3 minutes continuously without any pause. A customised bench step of height 12 inches was utilised. A metronome was set on 96 beats per minute (4 clicks = one step cycle). Participants' HR was noted before and immediately after the termination of the test. The stepping rate was 24 steps/min. Those who stopped within 3 minutes were evaluated and asked about the reason for stopping, like dyspnoea, fatigue etc. At the end of the 3 minutes, VO2max was calculated using the standard equations for males 111.33- 0.42 H; and for females 65.81- 0.1847 H, where H = HR (in beats/minute) after test completion.

ST data was collected using the Healthy Lifestyle in Europe by Nutrition in Adolescence (HELENA) ST-based sedentary behaviour questionnaire. The resulting score was noyed in terms of minutes or hours per week. PA levels were assessed using the validated Physical Activity Questionnaire for Adolescents (PAQ-A),16 which was also pilot-tested as a self-administered tool.

Data was analysed using SPSS 21. Quantitative variables were expressed as mean and standard deviation (SD). Qualitative variables were expressed as frequencies and percentages. Normality test was applied on the outcome variables. Data was normally distributed for VO2max as per Kolmogorov-Smirnov test p>0.05 value, while it was non-normally distributed for PA and ST (p<0.05). Linearity testing was done to find linear relationship between variables (p>0.05). As per the results of normality and linearity testing, Spearman's rank correlation test was applied for determining correlation between outcome variables. Test of choice was parametric independent samples t test for gender-based differences in VO2max, and non-parametric Mann-Whitney U test for PA and ST. 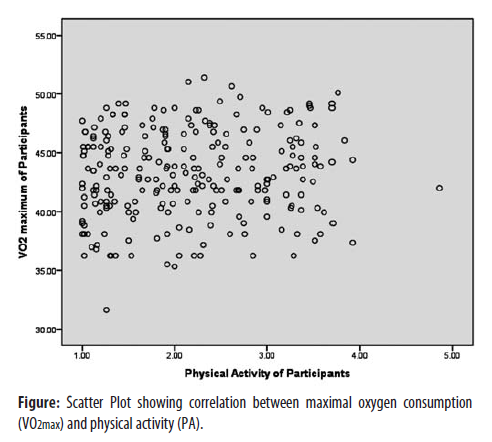 The findings revealed no significant correlation between CRF and PA, which is in agreement with an earlier study.17 High PA may have a positive effect in terms of increasing CRF.18 PA should be of at least moderate intensity to achieve substantial health-related benefits, and activities of vigorous intensity are recognised for providing better benefits.19 The findings of the current study validated these findings.

The current study also observed the relationship between CRF and ST, and the results depicted weak non-significant correlation, which is in line with literature.20 In contrast, a study found that subjects with high St had poor CRF.21 It has been shown in literature that if a person gets a minimum of 60 minutes of MVPA, CRF is not affected by ST.22 As per the relevant guidelines, PA of 40-45 minutes/day, limiting time spent on watching television by 60 minutes/day, and increasing VO2max reflects and maintains an individual's physical fitness level.23 The current study's findings about ST categories are consistent with an earlier study.24 The time spent on watching television by a typical teenager is 104 hours and 24 minutes/month, and the time spent on online media and video games is 11 hours and 32 minutes/month.25

Regarding gender-based differences, the current findings indicated comparatively low PA in females compared to males. This is similar to earlier results.26-28 According to a WHO report in 2015, 81% adolescents had insufficient PA, with girls being more physically inactive than boys.29

The current study also compared ST of males and females, and found that the females tended to be higher screen-users which is consistent with literature.30 This could be due to the fact that girls are more prone to spending a lot of time on social media sites than boys, and the gap increases throughout adolescence.31

The current study has limitations as it was conducted on a rather small sample using subjective measurement tools and field-based tests due to lack of availability of cardiopulmonary exercise testing (CPET) equipment to measure VO2max. Future studies should further explore the subject with larger sample utilising objective measures of PA and CRF.

Disclaimer: The text is based on a bachelors' thesis.