Conclusion: The prevalence of Factor V Leiden / prothrombin gene mutation in women with recurrent pregnancy loss was found to be very low.

In a normal pregnancy, there is altered haemostasis and a predilection for hypercoagulability. Elevated clotting factors, including fibrinogen, VII, VIII, X, and von Willebrand factor, decreased natural anticoagulants, like protein S, and increased fibrinolytic inhibitors with subsequent activated protein C resistance (APCR) are key contributors to this hypercoagulable state.1 Compared to non-pregnant females, the risk of thrombosis is 4-6 times higher in pregnant females.2 It has been observed that venous thromboembolism (VTE) is a complication in 1.72 pregnancies per 1000 births, with a mortality of 1.1 in 100,000 births.3 Approximately half of these women have underlying thrombophilia.4 Inherited thrombophilia is a genetic predisposition towards thrombosis due to the deficiency of one or more natural anticoagulants, like anti-thrombin III, protein S and/or C, or secondary to prothrombin gene mutation (PGM) or Factor V Leiden (FVL) mutations. FVL is a missense point mutation in the Factor V gene G1691A that results in abnormal Factor V protein resistant to inactivation by protein C, leading to unregulated coagulation. PGM is a precursor to thrombin that plays a key role in coagulation. Point mutation in the 3’-untranslated region of PGM gene G20210A also increases the possibility of thrombosis. While VTE risk is increased to 0.5-3.1% in a pregnant woman who happens to be an FVL heterozygote, it increases further to 2.2-14% if she is homozygous for FVL.5 Similarly, thrombotic risk during pregnancy is 0.4-2.6% in a PGM heterozygote, but increases to 2-4% with PGM homozygosity.5

The frequency of FVL and PGM in women with recurrent pregnancy loss (RPL) in Asian countries have been studied extensively (Table-1).

While a low prevalence of 1.0% for PGM11 and 1.3% for FVL12 has been reported in healthy individuals in northern Pakistan, this sixth most populous country does not have a national registry database for thromboembolic diseases. Results were variable with two studies reporting higher frequencies of 12% and 19% of APCR13,14 and another reporting a lower frequency of 5.4% for  FVL mutation15 in women with foetal losses. No study has ever reported PGM in women with RPL. The current study was planned to investigate the association of RPL with FVL and PGM mutations in the local setting.

The prospective study was conducted at the Aga Khan University Hospital (AKUH), Karachi, from January 1 to December 31, 2016.

After approval from the institutional ethics review committee, the sample size was calculated at 95% confidence interval (CI) and 80% power with an FVL incidence of 5.4% in women with RPL in Pakistan.15 RPL was defined as two or more foetal losses in first or second trimester or both, while APO included preeclampsia,16 placental abruption,17 FGR18 and stillbirth18 besides RPL. Patients with RPL in the cases group with or without APO were recruited from the obstetric clinics dealing with high-risk pregnancies. Women with normal pregnancy in the control group were enrolled when they visited laboratory for oral glucose tolerance test (OGTT). All women were enrolled after taking written informed consent. Those included were pregnant women aged >40 years with no apparent aetiology. Those with pelvic/anatomical pathology, endocrine dysfunction, hypertension, diabetes, autoimmune diseases, chromosomal disorders and liver dysfunction were excluded. A cut-off at 40 years was kept as the incidence of RPL increases to 50% after this maternal age.19

For deoxyribonucleic acid (DNA) extraction and polymerase chain reaction (PCR) studies for mutational analysis, 5ml sodium ethylene di-amine tetra acetate peripheral blood samples were collected from each participant and it was refrigerated till further analysis.18 DNA was isolated using Wizard® Genomic DNA Purification kit (Promega USA Cat No: A1125) and Restriction fragment length polymorphism (RFLP)-PCR was performed using previously established protocols with restriction enzymes MnlI and HindIII for FVL20 and PGM21 respectively. According to the size of bands, the subjects were classified as wild (345bp), heterozygote (345,322,23bp) or homozygote (322,23bp) for PGM, and wild (37,82,104bp), heterozygous (37,82,104,141bp) and homozygous (82,141bp) for an FVL mutation.

Data was analysed using SPSS 19, and normality of data was checked through Shapiro Wilk's test. Gene counting was done by dividing each type of allele with the total number of alleles in the sample. Probable allelic frequency of FVL and PGM was computed through Hardy Weinberg equilibrium using chi-square test.

Thrombophilia screening was routinely advised to all patients with APOs, but results were available for 57(66.2%) subjects, as 29(33.7%) patients refused testing because of cost-related issues. Protein S deficiency was seen in 2(2.3%) cases, while lupus anticoagulant, APCR and Pro Global C clotting assay were not identified in any case. There were 14(24.5%), 28(49%) and 5(8.8%) patients who were aCL-positive respectively for both immunoglobulin-G (IgG) / IgM, IgM-only and IgG-only (Table-2).

RFLP-PCR of FVL G1691A with Mnl1 gene showed 2(2.3%) patients having no livebirths and more than two first-trimester losses as heterozygotes for FVL mutation (Figure-1). 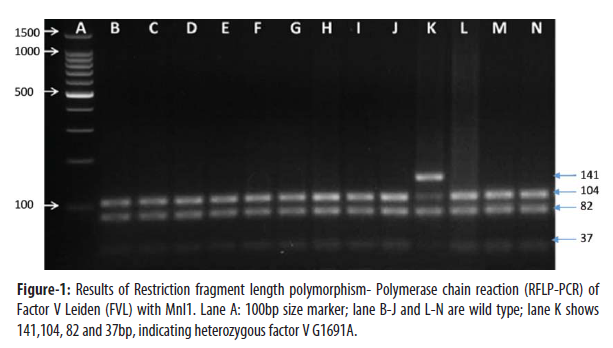 In parallel to FVL, no patient was homozygous for PGM mutation (Figure-2). 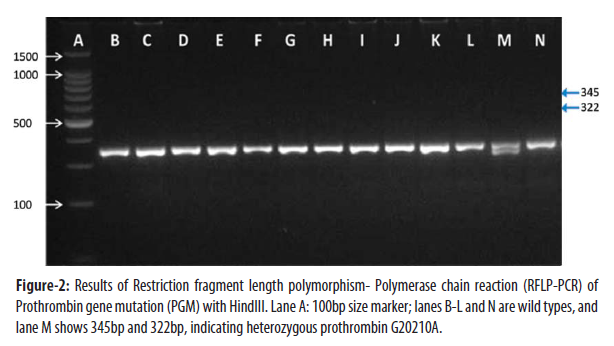 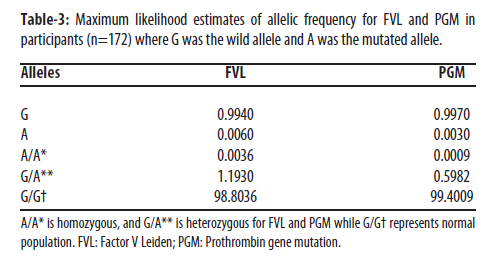 This patient was a 35-year-old woman with no livebirth and had recurrent first-trimester pregnancy losses. Her inherited thrombophilia screening was negative, but showed aCL positivity.

A significant finding of the current study was the presence of aCL antibodies in 82% of the tested patients. This may be the underlying reason for recurrent foetal losses for majority of patients though there was no personal or family history of VTE.

Thrombophilia may result in foetal losses either due to thrombosis of placental vessels with placental insufficiency22 or because of  invasion of maternal vessels  by syncytiotrophoblast causing micro-thrombi at implantation site.23 However, this hypothesis was challenged because RPL was not significantly high in women who had VTE.24 This raised the possibility of thrombophilia as a contributory rather than the sole factor in RPL genesis. Association of FVL and PGM was particularly reported with late pregnancy complications, like preeclampsia, second-trimester losses, intra-uterine growth restriction (IUGR) and placental abruption.24 However, these conclusions were driven by small and weak retrospective data and the included studies were designed primarily to assess VTE risk rather than APO. To avoid bias of retrospective studies, Rodger et al. in 2010 analysed data from 7 prospective studies comprising more than 16,000 women, and observed a small but absolute risk of pregnancy losses with FVL.25 The same study reported a pooled odds ratio (OR) estimate of 1.13 and wide 95% confidence intervals (CIs) of 0.64-2.01) for foetal losses due to PGM, including only 4 studies with an insufficient sample size of 9225.25 An updated meta-analysis by the same investigator found a similar small risk for foetal losses with FVL, but not with PGM.26 However, these studies were ethnically-biased because 77% of the included women were white Caucasians. FVL and PGM demonstrate an uneven geographical distribution and are more common in Europe than in Asia.27,28 Reports from Asian countries are more variable and are limited by small sample sizes, heterogeneous populations and in the definition of RPL to derive any meaningful data. Indeed, the cost-benefit analysis did not favour FVL/PGM testing in women with RPL in a report from India.29 Moreover, there are no benefits of anticoagulating women with inherited thrombophilia for preventing RPL, as observed in a recent meta-analysis.30

The current study is the first local study to determine the association of FVL/PGM with RPL, and may serve as a database for future work for larger studies in the country. The study's limitations are the small sample size, being single-centre and having incomplete thrombophilia workup. Large systematic studies are recommended in the local setting to better understand the role of these mutations in pregnancy losses.

There was no association between FVL/PGM mutations and RPL in Pakistani women. Thrombophilia workup for FVL/PGM is expensive and its need in a developing country should be rationalised.

Acknowledgements: In addition to all the study participants, we are grateful to Ms Amna Nasir, who assisted in molecular analysis, to data-collectors, specially Mr Muhammad Hasan, Ms Fizza Farooqi and Ms Uzma Shahid, and to Mr Ahmed Raheem for statistical analysis.

Disclaimer: The text is based on a project requirement of residency in FCPS Haematology. It was presented as a poster at the International Society of Thrombosis and Haemostasis, held in 2014 in the United States where it received the Young Investigator award.