Methods: The descriptive cross-sectional study was conducted at the Department of Paediatric Cardiology, Institute of Cardiology, Multan, Pakistan, from February 2011 to September 2019, and comprised patients with moderate to large secundum atrial septal defect without severe pulmonary hypertension. All procedures were performed under general anaesthesia and trans-oesophageal echo guidance. Success and safety of procedure were evaluated. Data was analysed using SPSS 16.

Results: Of the 75 patients, 26(34.6%) were males and 49(65.3%) were females. The overall mean age was 25±1.53 years (range: 4 -54 years). Mean defect was 20.38±0.58mm (range: 9-32mm). Large defects >25mm were 17(22.7%). Significant pulmonary stenosis was observed in 3(4%) patients and valvuloplasty was performed. Device size was selected on the basis of trans-oesophageal echo measurement +4-5mm. Balloon sizing was performed in only 3(4%) patients. Amplatzer septal occluder was used in 60(80%) patients. Balloon-assisted technique was used in 9(12%) patients. All the procedures were successful except 2(2.7%) where device was embolised and retrieved by surgery. Transient arrhythmias were observed in 6(8%) patients and small pericardial effusion in 1(1.3%) patient who was managed conservatively. There was no procedure-related mortality.

Conclusion: Transcatheter closure of moderate to large secundum atrial septal defect in children and adults was found to be a safe procedure.

Atrial septal defect (ASD) accounts for 8-10% of congenital heart defects (CHDs).1,2 ASD secundum is about 75% among ASDs and is only amenable to device closure. In Pakistan, ASD prevalence among CHDs varies from 9.3%3 to 12%.4 In childhood it is usually asymptomatic, as the murmur is soft and can be easily missed. Also, cardiac diagnosis facilities are lacking and patients report late when they become symptomatic. Age of diagnosis varies from childhood to adults. Device closure of ASD secundum was tried in 1976 and 19835,6 and its use became widespread after the introduction of Amplatzer septal occluder in 1995. Now it has become a standard procedure for closure of ASD secundum with adequate margins.4 Trans-oesophageal echo (TOE) is the gold standard for defect size and device selection. Intra-Cardiac Echo (ICE) is also being used now during the procedure without using general anaesthesia.7 Results of device closure are comparable with surgical closure, with limited hospital stay and no complications related to thoracotomy or bypass.8

The descriptive cross-sectional study was conducted at the Department of Paediatric Cardiology, Institute of Cardiology, Multan, Pakistan, from February 2011 to September 2019. The institute is the only cardiac centre in southern Punjab providing interventional cardiac services to children and adults with CHDs. The study was approved by the ethics review committee of Chaudhry Pervaiz Elahi Institute of Cardiology, Multan. Of all the patients diagnosed with secundum ASDs during the study period, central defects with adequate >5mm surrounding margins, except aortic margin and dilated right ventricle (RV), were selected. Those with small defects with no RV dilatation, and large defects with severe pulmonary hypertension (HTN) were excluded. Since the availability of costly devices at the institute Is a critical factor, transcatheter closure of secundum ASDs could be performed in a fraction of the patients, and only they were shortlisted for the current study after taking informed consent from each of them. ASD diagnosis was based on history, examination and transthoracic echo (TE). Suitability for device closure was assessed by TOE. Complex ASDs were defined as having >2 margin deficiencies, multiple ASDs, defects with malaligned, floppy or aneurysmal septum.9 The patients were admitted to the hospital one day before the procedure. Laboratory investigations included complete blood count (CBC), serum electrolytes, urea, creatinine, prothrombin time (PT), activated partial thrombin time (APTT), Hepatitis B, C screening and blood group. Chest X-ray, electrocardiogram (ECG) and fresh echo were performed. All patients were examined for anaesthesia fitness and blood was arranged. Standard procedure for closure of ASD was followed.1,2 All procedures were performed under general anaesthesia. TOE was performed to assess exact size and margins. Device was selected on the basis of 2-dimensional (2D) TOE size by adding 4-5mm. Balloon sizing was performed only if there was any doubt about ASD size. The femoral vein was accessed and heparin 100u/kg was given. Multipurpose catheter was placed in the right upper pulmonary vein and 0.35 extra-stiff exchange wire was anchored in it. Appropriate ASD delivery system was selected, prepared and taken to the right upper pulmonary vein (RUPV). Left atrial (LA) disc was opened partially in RUPV, then slowly waist and right atrium (RA) disc were released. Position of device was checked through TOE. By gentle pull, the LA disc was allowed to fall on inter-atrial septum. If the position on TOE was satisfactory, gentle push and pull was performed to check stability of the device. Procedure was performed in 30 degrees lateral anterior oblique (LAO) projection. Sheath was removed and haemostasis was achieved. Patients were observed for 24 hours in angiography ward for arrhythmia and bleeding. Aspirin 150mg was started a day before the procedure. A day post-surgery, TE was performed and the patient was then discharged. The procedure was considered successful if the residual shunt was <2mm or when there was no shunt at all. The procedure was considered safe if there were no major adverse events, like death, device embolisation, arrhythmia needing pacemaker, stroke, and pericardial effusion (PE) needing intervention.

Data was analysed using SPSS 16. Frequencies and percentages were calculated for categorical variables, while mean ± standard deviation (SD) was calculated for numerical variables. Fisher exact test was used to study the relationship of complications with age, gender, weight and severity of lesion. P<0.05 was considered significant. 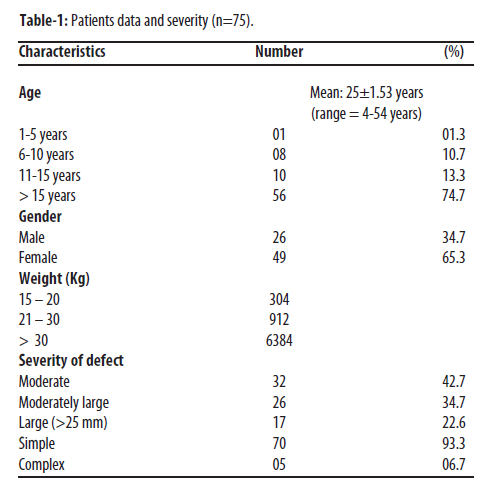 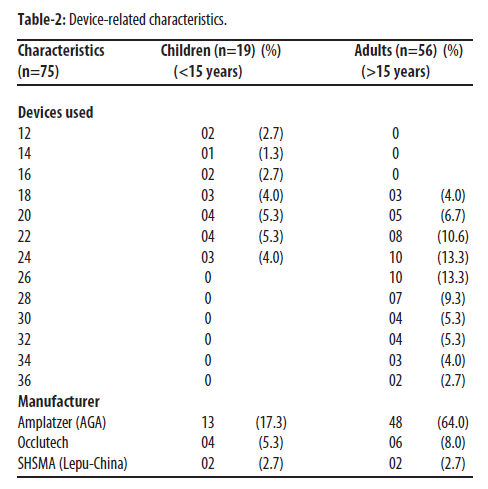 The procedure was uneventful in most patients with small insignificant residual leak of <2mm on colour flow in 8(10.6). These leaks disappeared within 24 hours. All the procedures were successful except 2(2.7%) where device was embolised. Transient arrhythmias were observed in 6(8%) patients and small pericardial effusion was noted in 1(1.3%) patient who was managed conservatively. There was no procedure-related mortality (Table-3).

Large defect size was significantly associated with immediate complications (p<0.05). Arrhythmia requiring medications were observed in 6 patients (8%). Of the 2(2.6%) patients with embolised devices, 1(50%) was a boy aged 10 with 20mm defect. Multiple attempts were made to stabilise the device across the defect, but the device unscrewed accidently. IVC margin, which was previously considered adequate, was found deficient in this patient. The second patient (50%) was aged 15 and had a defect size of 27mm. The device used was 32mm. The device was placed with balloon-assisted technique, but immediately after release, it was embolised in the pulmonary artery. Both the embolised devices were retrieved by surgery with simultaneous ASD closure. PE within 24 hours was observed in a woman aged 45 who had a large ASD with floppy margins. Balloon sizing was performed with 34mm compliant balloon in this patient and the device was placed with balloon assistance. PE got resolved within a month on medical treatment. The mean procedure time was 55±18.6 min (range: 45-120min) and mean fluoroscopy time was 11±08.2 min (range: 4-30 min).

ASD device closure has largely replaced surgical closure in suitable patients.2 This procedure is safe and as successful as surgical closure but with shorter hospital stay, less psychological stress and without complications of thoracotomy or bypass.10 The procedure is widely accepted worldwide after the introduction of umbrella-like Amplatzer device. Initial human studies were performed from 1995 to 1997.11,12 Amplatzer septal occluder has unique characteristics. It is a self expandable, self-centred device which can be readjusted and even retrieved. Larger defects can also be closed with these devices.13

The Institute of Cardiology, Multan, is the only tertiary care cardiac centre in southern Punjab catering to both children and adult cardiac patients. It started ASD device closure in February 2011 during an interventional workshop. Among the 75 patients having undergone the procedure, lesion was found in females twice as much as in males, which is in line with Pakistani and other studies.14,15 The aortic margin was found deficient in 69% patients. In a study,16 aortic margin was found deficient in 63.3% patients. Distal end of delivery sheath was usually placed in the left upper pulmonary vein (LUPV).17 It can be placed in RUPV or LA roof, depending upon the operator's choice. Balloon-assisted technique was used in 12% cases. This technique18 was also used by other operators in difficult cases. The most commonly used devices were 22-28mm which was reported earlier as well.19 Successful implantation of the device was done in 73(97.3 %) cases. Small insignificant residual leak <2mm was observed in only 8(10.8%) patients which disappeared on the following day. The success rate was comparable with national20 and international studies.21-23 Among the major events, device embolisation was found in 2.7% cases. Device embolisation in literature has ranged from 1%14 to 3%.21

In terms of limitations, the current study did not involve sample size calculation.

Percutaneous closure of moderate to large secundum ASD in children and adults was found to be a safe procedure without major immediate complications. Among the major events, device embolisation was common. Adequate IVC margin was crucial to stabilise the device. Other complications were rare, including PE and transient arrhythmias.