Identification and comparison of factors related to academic failure in medical colleges; A Bi-centre, comparative study

Objectives: To evaluate student's perceptions related to their academic failure, and to compare these perceptions with their nationality.

Methods: The non-interventional, bi-national, comparative study was conducted in medical colleges of Pakistan and Saudi Arabia from 2015 to 2017 and comprised medical students who had scored less than 50% in their professional examinations. Data was collected using a pre-designed 22-item questionnaire that was scored by the students on a 5-point scale. Data was analysed using SPSS 23.

Conclusion: Regardless of cultural and environmental differences in factors contributing towards failure in students of different countries, the risk factors were found to be common, with most students blaming external factors rather than internal ones.

Medical students, on leaving their alma mater, work as physicians and have an impact on disease outcome at local, regional, national, and global levels. This competence is measured by academic scores / performance.1 Thus, measuring the determinants of performance is vital for the improvement of educational quality of such institutions. It is known that in most of these performance examinations, held in medical and dental colleges, a few students fail. A small percentage of these tend to fail repeatedly in the same exam or in more than one exam during their undergraduate period.

Medical students complain about being overwhelmed by the volume of material they must study in a short period of time. They get distressed due to student-centred methodologies, and passive methods of instruction. Knowledge overload of the failed-in subject, poor time management, low output in written assessments, inadequate motivation to make efforts are predominant reasons of their failure.5

Research results from various parts of the world are different probably due to variations in curricula, education systems, and socio-political as well as cultural environment.6 Asian students tend to rely on teachers to provide for learning content, whereas Chinese students are known to cram.7 Language barriers are related to poor academic performance in those whose second language is English.8,9

The current study was planned to identify perceptions of Saudi Arabian and Pakistani students related to their academic failure, and to compare these perceptions based on their country of education.

The non-interventional, bi-national, comparative study was conducted in medical colleges of Pakistan and Saudi Arabia from 2015 to 2017 and comprised medical students who had scored less than 50% in their professional examinations. After obtaining approval from the Research Ethics Committee of Taif University (Approval #=40-36-0108) and Shifa College of Medicine (IRB#3442-291-2015), the sample size was calculated using OpenEpi calculator10 in the light of literature.2 The sample was raised using purposive sampling technique from among students who had failed even once in any professional exam. Those who did not furnish informed consent were excluded.

Initially, in Saudi Arabia, five students were asked about the main reasons for their failing. Their responses were noted. Based on this information and literature search, a preliminary questionnaire was developed which was pilot tested on the same five students to ascertain content relevance of the questionnaire. The tool was modified based on their feedback. The final questionnaire had 22 items and the study sample scored it on a 5-point scale. The same questionnaire was pilot-tested and used in Pakistani sample.

Data was analysed using SPSS 23. Frequencies and percentages were calculated for all the statements. Normality test showed that the data set was not normally distributed. Differences in responses with respect to country of education were analysed using nonparametric Mann Whitney U-test. P< 0.05 was taken as significant.

Of the 210 students, 115(55%) were Pakistanis and 95(45%) were Saudis. The entire Saudi sample comprised males as during the period of data-collection, it was not permissible for male researchers to enter a female campus. Among the Pakistanis, there were 50(52%) male and 65(69%) female students.  Overall, there were 134(64%) day-scholars, and the maximum number of respondents were from the second year 78(37%) (Table-1). 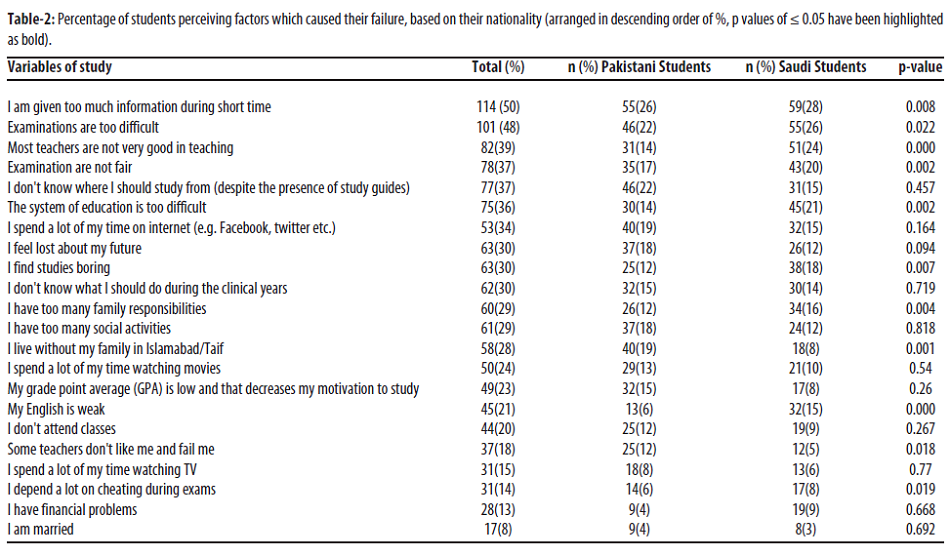 Findings showed that information overload, difficult examination, poor teaching skills, unfair examination and difficult system of education were cited as the major causes behind the failure of medical students. The three least common factors cited were marriage, financial problems, and cheating. Overall, 11 of the 22 items showed significant difference between the students of the two nationalities.

Saudi students showed two peaks of failing at extreme years of medical college; 28(29%) in second year and 41(43%) in the final year, whereas Pakistani students showed a peak at second year 50(43%) followed by gradual decline in frequency of failing 6(5%) in the final year. Two studies11,12 showed a similar distribution of problems faced by new enterants. A study13 also identified the trends shown by Saudi students where first and final year students exhibited extreme stress, confusion about learning resources, difficulty in coping with excessive information in less time and, thereby, higher rates of failing. The confusion about learning resources was present despite the presence of study guides that clearly listed references from books, journals and websites.

The current study showed that 77(37%) students were perplexed about learning resources, whereas 63(30%) found their studies boring and felt lost about their future. A study14 stated that failed students who complained of knowledge overload seemed unable to balance between their studies and extracurricular activities, lag and gradually lose interest.

Like the present findings, a study15 emphasised low competence in English comprehension as a distinct factor in students' under-performance. Moreover, the role of faculty and learning resources cannot be underestimated. The results of the current study corresponded with those of a study2 in which curriculum, educators, learning environment, family and socioeconomic factors were considered important factors in failing. A study16 explained that failed students have greater fear of negative evaluation by teachers, they dislike giving tests and they lack effective study skills. The current study demonstrated no significant relationship between poor attendance and failing (p = 0.0267).

Living away from home was another powerful factor most evident in Pakistani students 40(19%) than in Saudis 18(8%). However, this contrasted with a study17 in which no difference in scores of hostellers and day-scholars was found. This might be because Asian youth tend to stay in families for longer periods of time than their counterparts.

One study15 stated that married students tend to get higher grades. The contradictory findings in the current study can be explained by assuming that marriage increases family commitments and responsibilities, and students face financial problems, difficulties in time and stress management.

It is possible that people learning in different countries, with differences in their upbringing and environment, show diversity in their opinions and attributions towards their failure.6,7 Saudi students attributed failure towards external factors which is in accordance with a study18 stating Saudi students think that their failing is due to teachers, curriculum, and information overload.

According to Weiner's Attribution theory,19 if failure is perceived as due to insufficient efforts, this will lead to a positive academic outcome. Students who blame external factors for their under-performance will have more difficulty in succeeding.

Failing in exams is an important cause of stress amongst medical students, which can lead to serious consequences. Psychological disturbances, decreased motivation, suicidal tendencies and increased prevalence of substance abuse are common problems amongst students who are striving to pass their exams.20-22 Most factors highlighted in the current study can be dealt with by careful planning and consistent students' training. Workshops on time management and study skills, feedback and close academic support might prove to be useful.

The current study has limitations as it was conducted in one medical college of each country, and its findings cannot be generalised. Besides, several other factors, such as pre-admission calibre, aptitude, learning and teaching styles, study habits, study skills, level of parental education, indoctrination by parents, resources and facilities, were not studied. Another important limitation is that Saudi female students could not be included.

Regardless of nationality, most students who performed poor perceived their failure in nearly the same manner. The assumption of country of education playing a part in failure thus stood negated. Though there are some differences due to environment in factors contributing towards failure, many factors remained the same. Most students tend to blame external factors more than internal ones.

Disclaimer: The text is based on a Masters thesis of first author. Second author was her supervisor.