Objectives: To evaluate the translation and validation of human immunodeficiency virus stigma scale in Urdu language.

Methods: The evaluation study was conducted in Lahore, Kasur, Gujranwala and Faisalabad from January 2019 to June 2019. Forward-backward translation method was used to translate the human immunodeficiency virus stigma scale from English to Urdu. Additionally, inter-correlation among variables was assessed by using correlation to determine the psychometric properties. Exploratory factor analysis of the scale was done followed by confirmatory factor analysis for establishing a good model fit.

Results: Cronbach's alpha coefficient was 0.95. There was high correlation among the sub-components of the scale, ranging from 0.38 to 0.80 (p<0.001). Confirmatory factor analysis depicted good model fit.

Conclusion: The Urdu version of the human immunodeficiency virus stigma scale was found to be a valid and reliable tool to measure personal stigma, disclosure concern, concerns about public attitude and negative self-image.

Stigmatisation and discrimination against individuals with human immunodeficiency virus (HIV) or acquired immunodeficiency syndrome (AIDS) has been one of the defining features of the disease. Stigma can be defined as a feature or attribute that is deeply discrediting and can lead to a reduction in the social status and standing of a person or a group of people to a discounted one.1 Research has shown that these actions can lead to a reduction in the life chances of individuals suffering from this condition.2 The stigma related to HIV is prevalent globally and works negatively for those having HIV because the stigma hampers the lifestyle and medical choices of the sufferers.3

Although many tools have been developed for the screening of the internalised and covert stigma in HIV patients, only a few of them cover the overall aspects of the stigma. One of the most commonly used instruments4 is the HIV stigma scale (HSS) which has 40 items. Later, its shorter version was adapted and validated with 12 items.3 It has psychometric features similar to the extended original.4 Research suggests that many people limit their interaction with HIV patients once they get to know about the disease. According to the World health Organisation (WHO), the fear of stigmatisation often hinders HIV-infected people to get tested and treated due to which their illness gets worse at an alarming pace.

Factors included in HIV stigmatisation and discrimination are negative attitudes, prejudice and abuse not only towards the victims, but also towards their families. Studies of 35% countries reported by the Joint United Nations Programme on HIV and AIDS (UNAIDS) in 2015 indicated that almost half of the people possess discriminatory behaviour towards the families of HIV/AIDS patients. According to UNAIDS report 2017, in healthcare settings, these attributes lead to barring the individuals from accessing the good quality of healthcare services. These attitudes result in the delay in seeking treatment and diagnosis which in turn leads to the spreading of disease rapidly as well as occurrence of other health problems.5

An indigenous scale or instrument is needed to identify the anticipated HIV stigma in Pakistani population.

The current study was planned to translate and do cross-language validation of the HSS, and to establish the psychometric properties of the Urdu version.

The evaluation study was conducted in Lahore, Kasur, Gujranwala and Faisalabad from January 2019 to June 2019. The process comprised three phases and was initiated after consent to translate the scale into Urdu was taken from the author. Phase I had four stages.6,7 In stage 1, forward translation was done by three individuals with bilingual capacity. Among them 2(66.6%) were women; 2(66.6%) had Masters' degree in English with good understanding of Urdu language; and 1(33.3%) had Masters' degree in Urdu language and had expert understanding of the English language. The participants were contacted individually.

In stage 2, the equivalence between Urdu and English version was checked along with face validity, cultural context and meanings of the items using a committee of seven healthcare professionals. All items were retained on the basis of the participants' responses.

In stage 3, backward translation of the scale into English was done by three bilingual experts having done Masters in English and having expertise in their field. Of them, 2(66.6%) were men. These three experts were kept blinded to the original HSS. Further, two psychologists evaluated the translation and back-translation of HSS in the light of the original. All the items conveyed similar meanings in both the versions. This finalised the translation.

Stage 4 of the phase comprised pilot study on 30 HIV patients. Majority of the patients found it easy and understandable. In the Urdu version, the item order of the original scale was followed.

In order to select the suitable sample for the different analyses, participant-per-variable ratio, normal distribution method, and expert's opinion were kept in mind.8,9 The normal distribution method suggests n >30 is suitable for parametric test in clinical cases and experimental designs,3 while per-variable ratio is suitable for analyses having multiple variables, like regression. Therefore, Cronbach's alpha, correlation of two variables at a time, and regression of 5-10 participants per variable10 demanded a sample ranging from 30 to 250. The sample size for the pilot study was calculated in the light of literature11 according to which the minimum number for a pilot study is 10. For the same size of confirmatory factor analysis (CFA), a study12 suggested that a "typical" sample size in structural equation modelling (SEM) is about 200. Sample size for reliability analysis was calculated as per a study13 which analysed a sample size of 30 and found that Cronbach's alpha coefficients was reliable.

In phase II of the study, internal consistency and construct validity of the Urdu version was established. Cross-language validation, Cronbach's alpha reliability coefficient and item total correlation were checked.

In this phase, the sample was raised using purposive sampling technique, and homogeneity of the sample was ensured by matching demographic variables of the participants were in terms of age, gender, academic qualification, marital status, employee status and urban-rural composition. Those excluded were individuals aged <25 or >55 years, those having AIDS, and transgenders.

In phase III, analysis of a moment structures version 5 (AMOS5) was used to check the factor structure of the Urdu version.

Formal consent was obtained from the relevant department before approaching the subjects, and informed consent was taken from the participants. 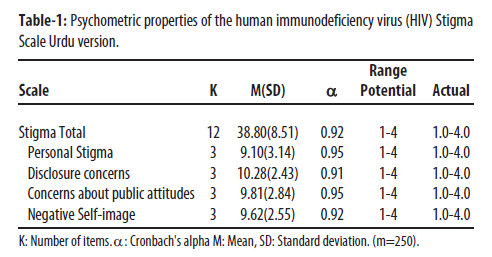 Forward, backward and original scale scores were significantly and positively correlated with each other (p<0.01) (Table-2). 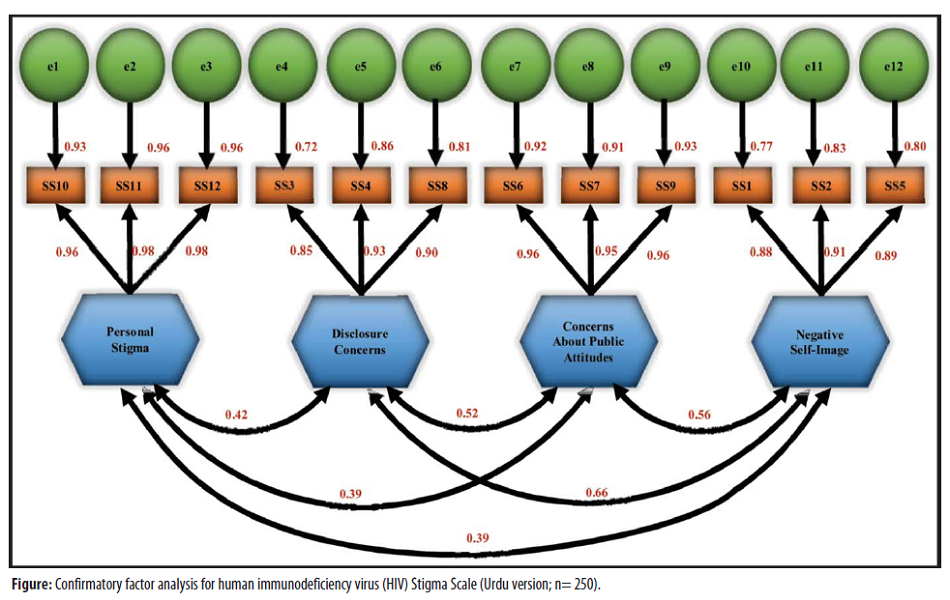 Stigma, along with other forms of social marginalisation, can influence a patient's decision to undergo testing, his/her adherence to treatment, and retention in healthcare globally.14

The current study described the process of the translation of HSS in Urdu, and HIV-positive subjects had stigmatised views about themselves which limited their interaction with the community. This finding was in line with a study.10 The translated version had comparable psychometric features with the original 40-item scale.4 The current findings are consistent with a study3 in which the original scale was translated into the Swedish language.

The current study has limitations, as the sample was limited to a single province. By including people from other provinces, it's the validity of the scale could have improved. Also, the cross-cultural validity could have improved by involving Pakistani citizens suffering from HIV residing in other countries.

The Urdu version of HSS was found to be a reliable and valid instrument when used with a large, diverse sample of people with HIV. In HIV-positive people, stigma has strong relationship with depression which may influence treatment adherence.

Disclaimer: The text is based on a Ph.D dissertation.