Objective: To compare the effectiveness of conventional teaching methodology against the role play method from the standpoint of medical students.

Method: The questionnaire-based study was conducted at Majmah University, Saudi Arabia, during the 2018-19 academic year, and comprised final year medical students. The study was conducted in two settings during the psychiatry module; first while discussing suicide and second while discussing violence. In both the settings, the students were divided in two randomised groups of cases and controls. The controls were taught with conventional methodology, while the cases were taught primarily using role play. Data was collected using a questionnaire pertaining to students' level of satisfaction regarding different aspects of the learning process. Data was analysed using SPSS 21.

Results: In the first setting, there were 53 students; 29(54.7%) controls and 24(45.3%) cases. In the second setting there were 54 students; 27(50%) cases and as many controls. In both settings, students in the control group rated conventional teaching significantly more interactive compared to the role play method (p<0.05). Clarification of doubt was more in the control group in the first setting (p<0.05).

Conclusion: Although change in curricula is the need of the time, students' feedback is essential.

The current era is that of rapid explosion of easily accessible literature and knowledge. Students need to be critical thinkers, problem-solvers and analytical in their approach. They need to learn how to integrate knowledge and skills and to achieve effective communication skills to become an effective individual as well as a team member.

The teaching process globally is undergoing experimental processes to meet these rising trends. Curricular reform in Basic Medical Education (BME) in medical schools has been a topic of consideration for quite some time now. New medical schools strive to embody innovation, while seasoned ones are seeking compliance with current principles of adult learning, the needs of society, the changing nature of healthcare and how modern students learn best.1

Behavioral sciences equips the students to deal with various difficult and complex situations during medical practice.3

Teaching evaluations have consistently listed role play (RP) as the most memorable portion of the didactic presentation.6 Studies have tried RP as a teaching tool with excellent feedback from students. Most students considered peer-role-play (PRP) as an indispensable tool to acquire effective communication skills, providing experiential learning opportunities and its feasibility of implementation, with RP sessions justifying inclusion in undergraduate medical curricula.7

Psychiatry is a discipline crucial to undergraduate medical curriculum. Knowledge of psychiatry, mental health, and behavioral sciences equips the students to deal with various difficult and complex situations during medical practice. However, all students do not have an opportunity to do internship in psychiatry. Training in psychiatry requires specific skills and attitudes, not simply memorization.

The current study was planned to evaluate the innovative approach of RP-based learning (RBL) as a vehicle for teaching psychiatry.

The questionnaire-based study was conducted at Majmaah University, Saudi Arabia, during the 2018-19 academic year, and comprised final year medical students. After approval from the institutional ethics review board, the study was conducted in two settings during the psychiatry module; first while discussing suicide and second while discussing violence. All students willing to participate and furnishing informed consent were included, while those not willing or perceiving English as a language barrier were excluded.

For both settings, the students were divided in two study and control groups using simple random technique.

While teaching suicide, control group A was taught with a hybrid methodology of interactive lecturing, debates and small group discussions (SGDs), while study group B was taught via the RP method.

While teaching violence, control group C was taught with hybrid methodology, while study group D was taught via RP.

After the respective teaching sessions, both the groups were provided with a questionnaire designed to assess the students' opinions about the content of the undergraduate curriculum.  The questionnaire pertained to questions regarding students' knowledge, skill and analytical ability of the topics taught in the module. The students were inquired about their own confidence regarding their problem-solving approach, their interest, level of satisfaction and doubts clarification after being exposed to the teaching sessions. The responses were recorded on a scale of 1-5 where 1 was 'poor', and 5 was 'very good'.

Regarding the students' perspective of level of knowledge attained during the two sessions, none of the four groups showed any statistical difference (p>0.05), and the same was the case with problem-solving abilities, familiarization with the required professional competence, development of interest, and objectives clarification of the course taught (Tables-1, 2). 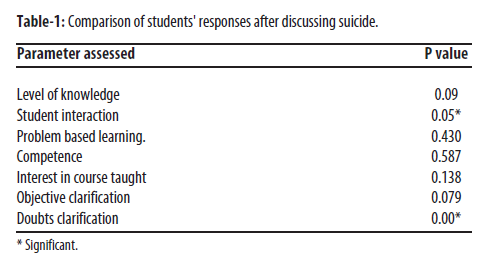 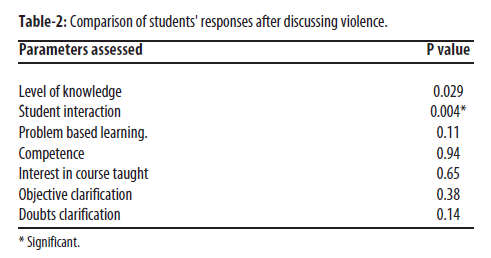 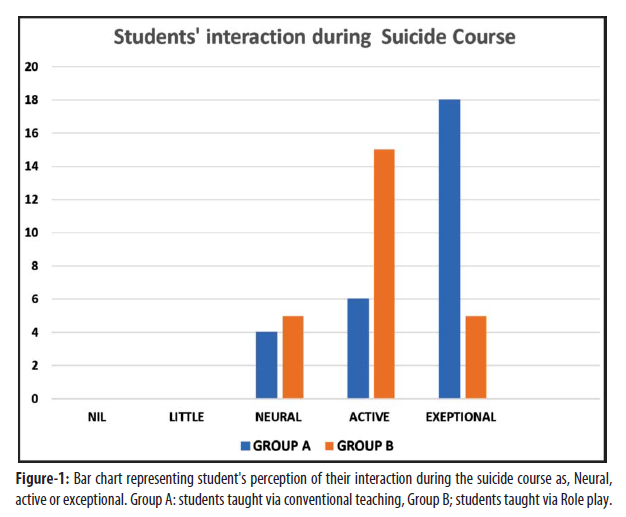 Also, clarification of doubt was more in the control group in the first session (p<0.05) (Figure-2). 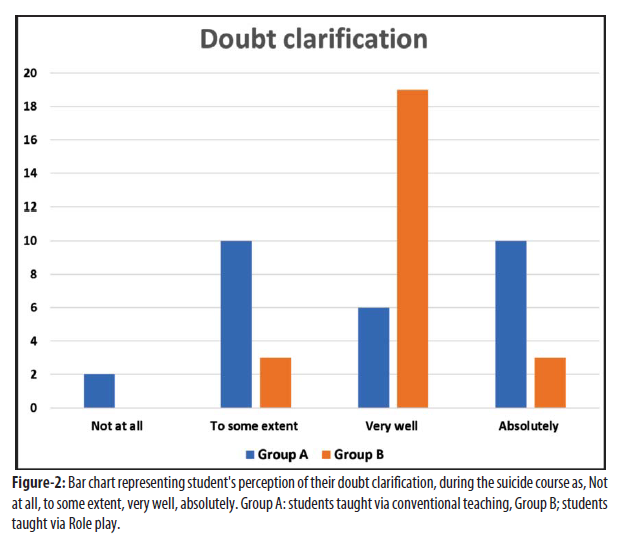 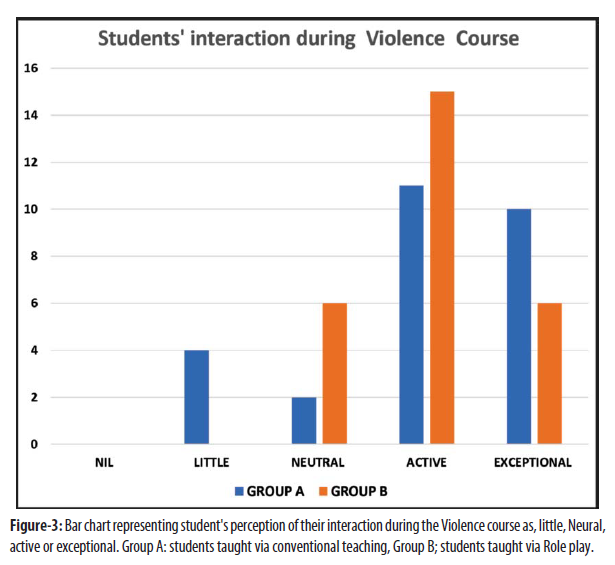 The conventional method of teaching is being revolutionized globally. With evolving medical education, there has been a noticeable decline in students' interest and, hence, attendance in terms of conventional teaching modalities.8 These methods, although time-tested, are being compared against the newly-evolving teaching strategies. The current study was designed to observe students' perception about the two teaching modalities.

Recent studies have demonstrated the effectiveness of RP in other disciplines of medical curriculum.9 Conventional system of teaching, although heavily debated in current medical education systems, did not show much statistical difference when compared to RP strategy regarding students' perception of gain from the two systems in the current study. Although not counter-verified through students' actual performance in the evaluation process, the results are consistent with literature which suggested that no new technique can be substituted for time-tested techniques of teaching and learning.10

Today, most educational systems employ advanced technology to meet the demands of students and academic faculties. Researchers believe that "if we teach today as we taught yesterday, we rob our children of the tomorrow".11 While new methodologies are incorporated in the education system, it is vital to take students' feedback and assess the outcome too. Medical educationists are taking up the task for redefining teaching strategies and at the same time taking students' opinion.12 Much emphasis is paid today on the implementation of strong student support system in order to initiate timely remedial measures in teaching, if required.13 RP gives the students an opportunity to effectively absorb the knowledge they have acquired. The participants can turn them into real-life characters useful to them in the future. Immediate feedbacks from observers and the facilitators give RP a cushion to compare their well and poorly performed parts and then improvements can be made.14 Studies in Pakistan demonstrate success and effectiveness of RP for medical students despite limited-recourse setups.15

In the current study, the students were asked about their own level of satisfaction regarding different aspects of knowledge, skill and competence after undertaking two different themes of psychiatry module; suicide and violence.

In terms of the level of knowledge acquired after the respective teaching sessions, the response of students in both themes showed no statistical difference between conventional teaching and RP. This is in contrast to a previous work in which RP was proved to be a better teaching strategy on knowledge and practice of nursing students.16 However, there are also some other studies reporting that traditional lectures resulted in significantly better learning compared to RP.17 This current study does not support any shift in teaching paradigm, as there was no significant difference in students' responses.

Similarly, other assessed parameters of learning, like students' confidence regarding problem-solving approach, familiarisation with required professional competence, interest in the material taught, and objective clarification, demonstrated no significant difference in students' perception in either of the themes taught. Group A versus B in the suicide theme, and C versus D in the violence theme, when compared statistically, depicted no significant difference. The modern concept of education, however, endorses that simulation, like RP, usually leads to improved knowledge and skills and both the students and the facilitators express high levels of satisfaction with the method.18 Despite this strengthening concept, some medical educationalists still hold the view that teaching sessions, such as RP, do not influence the learning process and student attitudes.19

The current results balance out the effectiveness of both systems, since the learners' opinion of both groups was not found to be any different either. These results highlight the contribution of facilitators in the learning process regardless of the teaching method adopted. University teachers are one of the main pillars of an institution20 and their contribution has no substitute. Marleen W et al. identified four profiles of medical academics as the 'Inspirer', the 'Role-model', the 'Practitioner' and the 'Critic'.21 It has been long established scientifically that a student-centred orientation adapted by teachers focuses on enhancing the learning of the students even when teaching content.22

Interestingly, in the current study, two parameters, namely students' perception of their interaction during the respective themes and doubt clarification, showed significant difference in the responses of the control and study groups, and the recorded shift of students' satisfaction was towards the conventional teaching methodology. Despite a dominant perception of RP as an extremely effective tool for teaching of clinical medicine,23 in the current study, students taught via conventional tools reported more interaction during the course compared to the RP group. Our findings are in line with those by a group of educationists who established in 2016 that students perceive instructor-learner and learner-content interaction to be more important to their learning compared to peer interaction.24

Regarding doubt clarification, the students facilitated through RP in the theme of suicide exhibited more satisfaction compared to the control group, and this difference was significant, while, in teaching violence, there was no such difference between the responses study and control groups. In respect of doubt clarification, it can be interpreted that since conventional teaching strategies allow students' questioning during the learning sessions, the students, therefore, had the opportunity to have their doubts clarified better during the theme.

It has been demonstrated that students' questions can help students to monitor their own learning, frame their ideas, direct their thinking in certain specific directions, and advance their understanding of scientific concepts and phenomena helping doubt clarification.25 Thus, educationists believe that in order to maximise students' learning, the facilitators need to be aware of how the students learn, and adjust their strategies accordingly to fit the students' needs26 by adopting new modalities.

The limitation of the current study is that the sample sizing was not calculated.

The findings remain inconclusive regarding a single teaching strategy preferred by the students benefitting their learning process. However, a combination of traditional and advanced methods is expected to improve learning outcomes. The role of teachers may be enhanced and focus on teachers' training may be sharpened to further improve the medical education process.

22.    Kember D. A reconceptualization of the research into university academics' conceptions of teaching. Learn Instruct. 1997; 7:255-75.