Methods: The case-control study was conducted from October 2017 to March 2018 at Quaid-i-Azam University, Islamabad, Pakistan, and comprised breast cancer patients and age-matched controls recruited from the Bahawalpur Institute of Nuclear Medicine and Oncology, and the Bahawal Victoria Hospital, Bahawalpur.  Socio-demographic data, family history of cancer, reproductive health and lifestyle factors were recorded using a structured questionnaire. Data was analysed using SPSS 21 and Stata/IC 14.1.

Results: Of the 326 women, 163(50%) each were cases and controls. The mean age for both the groups was identical at 46.04±10.62 years. Positive family history and hypertension were significantly linked to increased breast cancer risk (p<0.05), while intense physical activity, increased anthropometric measurements and breastfeeding per child in months were inversely associated with the risk (p<0.05).

Globally, 1.7 million new breast cancer cases are diagnosed each year and 33% of them die of the disease.1 Incidence rates are higher in Europe compared to Asia. The incidence rate of breast malignancy in Pakistani population is 2.5 times higher than India and Iran, accounting for 34.6% of female cancers.2,3 Approximately 10% of all breast cancers have a hereditary background, while major contributors are non-genetic risk factors.4 Various studies have reported contribution of non-genetic risk factors to breast malignancy from different populations, like Askhensi Jews, Australian, European and American populations,4,5 but there are few such reports from Pakistan,5-8 and none of them is based on the population in southern Punjab.

Given the differences in social attributes, education, lifestyle and potential exposure to risk factors, breast cancer contributors in Pakistan may differ from those already reported for other populations. Relative mortality due to breast cancer is greatest in less-developed countries,3 like Pakistan, which is attributed to detection at later stages due to lack of awareness and lack of access to early screening and treatment.11,12 Therefore, characterisation of risk factors for breast cancer in local population can lead to improvement in diagnosis especially at early stage, management and efforts to avoid preventable behaviours and exposures. The current study was planned to investigate epidemiology, clinical aspects and risk factors associated with breast cancer in Pakistan's southern Punjab region.

The case-control study was conducted from October 2017 to March 2018 at Quaid-i-Azam University (QAU), Islamabad, Pakistan, and comprised breast cancer patients and age-matched controls recruited from the Bahawalpur Institute of Nuclear Medicine and Oncology, and the Bahawal Victoria Hospital, Bahawalpur. After approval from the QAU ethics review committee, the sample size was calculated using Epitools software taking 5% margin of error, hazard ratio 2 and with power 80%.13,14

The sample was raised using non-probability consecutive sampling technique. Those included were histologically-confirmed breast cancer patients who visited the hospitals irrespective of age, family history, clinical presentation, histopathological type etc. Controls were healthy women with no history of breast or any other cancer, belonging to southern Punjab region who were individually matched to cases by age. They were recruited at the same time from among patients' attendants. Informed consent was obtained from both the cases and the controls.

Data was collected using a pre-designed questionnaire by a single investigator. The questionnaire was prepared in the light of published reports.7,8 It was translated into the local language whenever required and backward into English to ensure uniformity and accuracy of data. The structured questionnaire included information on socio-demographic, menstrual and reproductive characteristics, family history of cancer in first- and second-degree relatives and several lifestyle factors, including night-shift working, smoking etc.

Height and weight were recorded for the calculation of body mass index (BMI) which was classified according to the World Health Organisation (WHO) cut-off values for Asian countries.15 Physical activity was estimated in three subsets, including activity at work, activity of travelling, recreational activities as well as sedentary behaviour, and was recorded using the Global Physical Activity Questionnaire (GPAQ2).16 At time of recruitment, menopausal status was determined as premenopausal if women had regular menstruation over the preceding 12 months, and postmenopausal if menstruation was absent in the last 12 months. 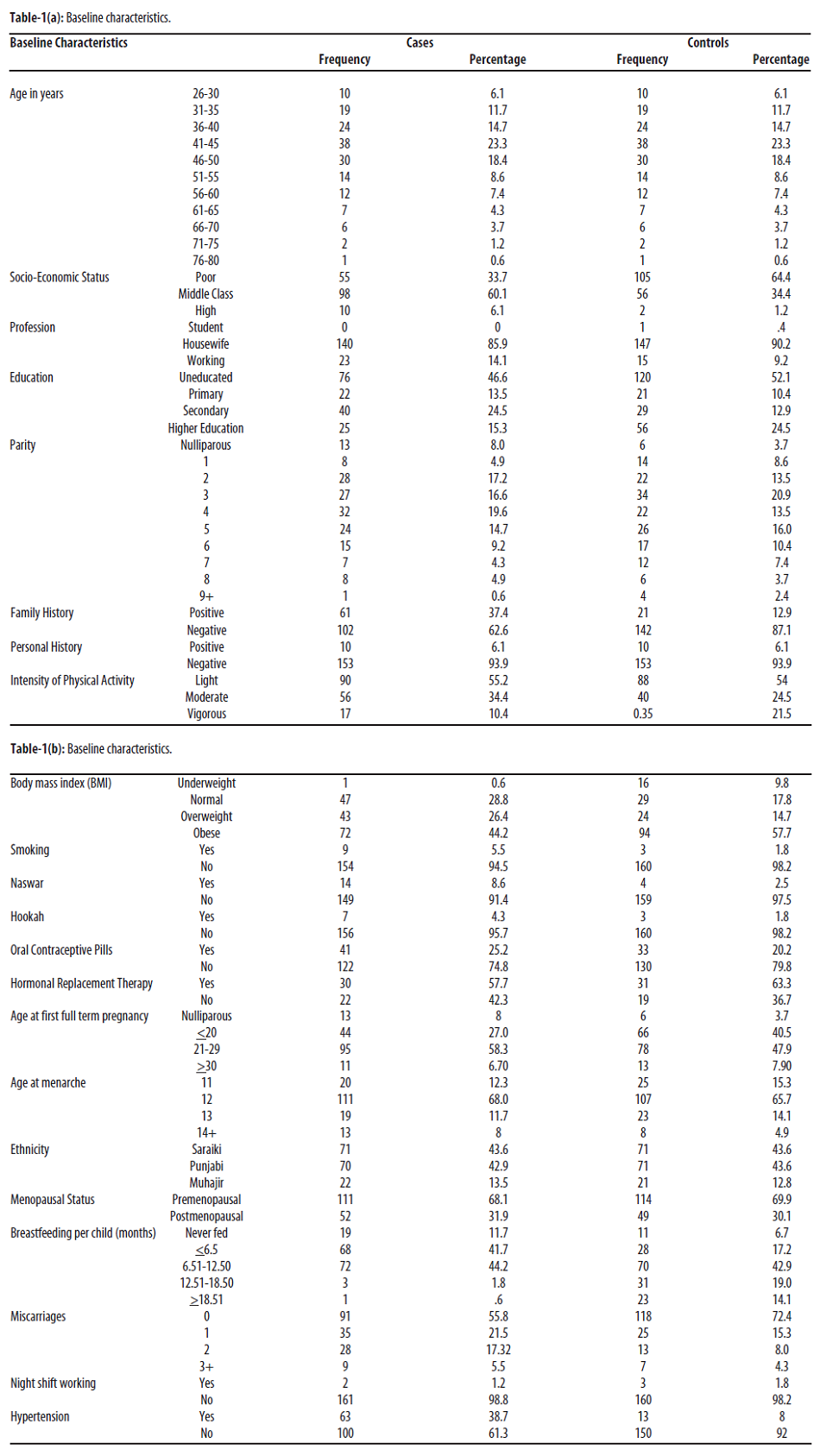 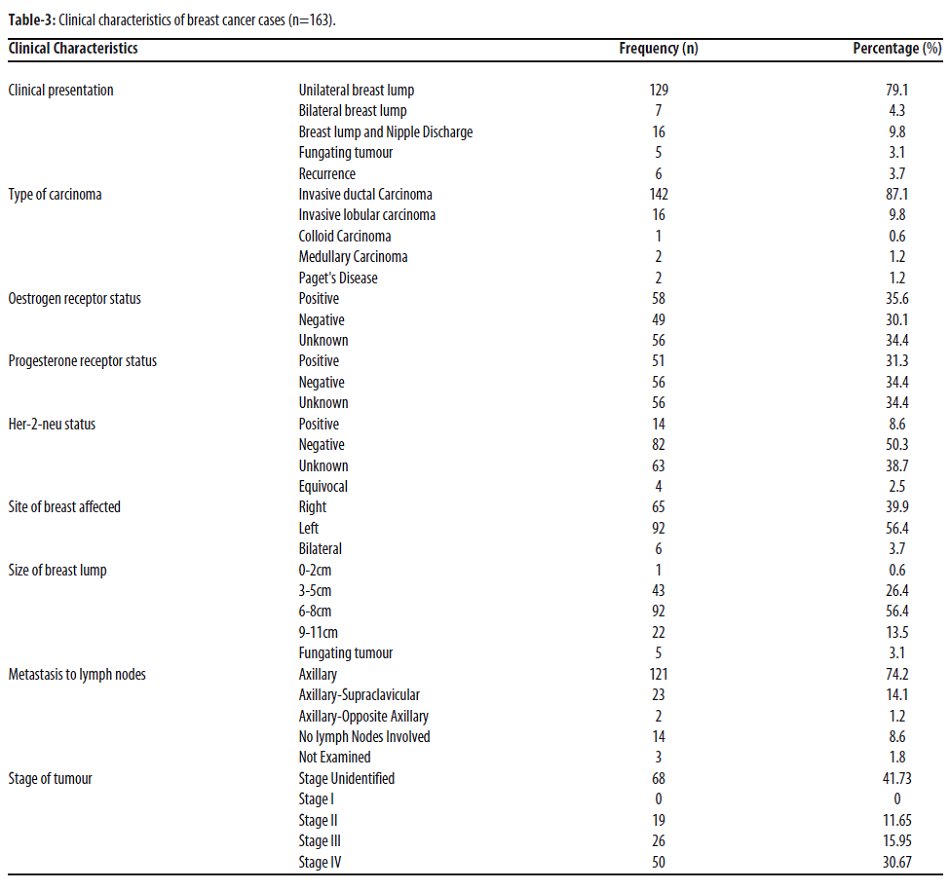 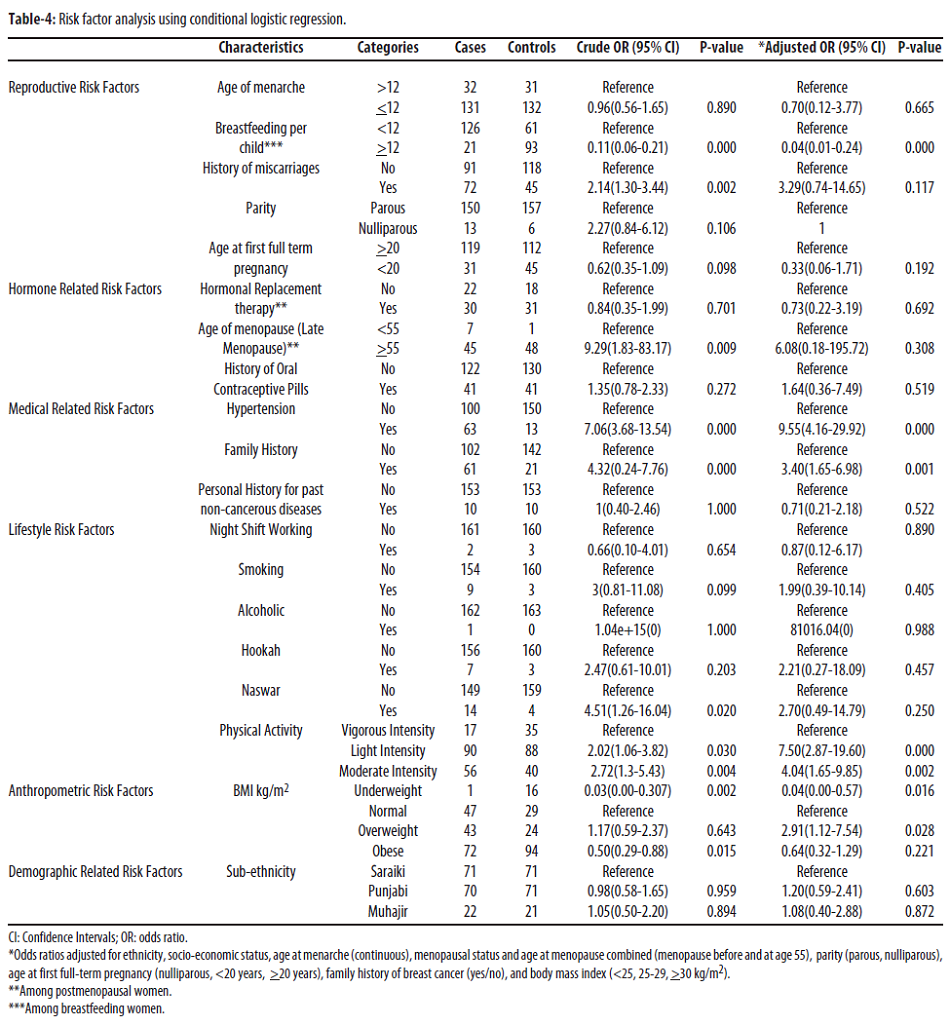 There has been a huge increase in breast cancer cases in Asia over the last few decades.17 Lack of resources for diagnosis and management of the disease has increased the mortality rate in Pakistani population as well.12 The relationship between breast cancer and various aetiological factors have been reported previously.9,10 Among the contributing factors, some preventable causes are related to the socio-cultural context and require study within different populations. None of the previous studies on potential breast cancer risk factors from Pakistan was based on southern Punjab population.6,18 However, geographical variations in incidence and mortality rates of breast cancer are reported worldwide and thus, the present study was planned to investigate epidemiology, clinical characteristics and reported potential breast cancer risk factors in women from southern Punjab through matched case-controls using conditional logistic regression.19

Several conflicting results have been reported for breast cancer and HTN,24 while our results showed that HTN was significantly associated with breast cancer. Previously, Han et al. documented that the effect of HTN varied in pre- or post-menopausal women perhaps due to the difference in hormonal exposure,24 but the current study found HTN irrespective of the menopausal status. Various mechanisms have been proposed to explain the association of breast cancer with HTN, like sharing of common patho-physiological pathway by HTN and breast cancer which may be mediated by adipose tissue.25 Furthermore, HTN is considered to be implicated in apoptotic deregulation and, hence, may increase breast cancer risk by affecting the regulation of cellular turnover,24 but no plausible explanation has been proposed.

Menopausal data of cases indicated that maximum patients had pre-menopausal status. Late menopause was found strongly associated with breast cancer in the current study. Women who attain menopause at or >55 of age are six times more likely to be diagnosed with breast cancer compared to those who attain it before that age.9 Average age of attaining menopause among Pakistani females ranges 40-49 years.6,18 Delay in menopause increases the period of exposure to steroid hormones which enhance the risk of cancer by 3%.9,10 Adipose tissue is correlated with excessive oestrogen which refers to the BMI. High BMI and delayed menopause are reported to have a positive association with breast cancer risk, but the current results did not indicate that, which may reflect a more complex relationship involving menopause, BMI and other related factors. Obesity has been inversely associated with the risk of breast cancer among pre-menopausal women.26,27 Data showed that 0.6% patients were underweight, 28.8% had normal BMI, 26.4% were overweight and 44.2% were obese. The current results support earlier findings27,28 of complicated association between breast cancer risk and obesity among pre- and post-menopausal women. In the current study, 68% cases were pre-menopausal, but lack of association could be due to increased BMI of the controls compared to the cases.

Usage of oral contraceptive pills (OCPs) is also a controversial risk factor as a number of studies have reported positive association31 while others have reported a negative association.29 Our results showed positive but non-significant association. Deviation of results may reveal population difference or unrealistic answers provided by the participants. No significant association was found between HRT and increased breast cancer risk, as the number of post-menopausal HRT-obtaining females was equal in the two groups.29

Among habits, smoking is one of the well-known risk factors for cancer development28 which was also evident in the current study, but the frequency of smokers was too small to validate the significance of this association. Similarly, using 'hookah' and 'naswar' was found to be associated, though non-significantly, with increased breast cancer risk. Verification of the findings requires detailed analysis using large sample size. Alcohol consumption was found to be the variable of least importance in the current study because of social and religious norms. Only one patient gave positive response for alcohol though it is an established risk factor for breast cancer.5,23

There was positive association of HTN and family history with increased breast cancer risk, while breastfeeding, increased BMI and intense physical activity decreased the risk in women from southern Punjab. Lifestyle and reproductive risk factors may take many years before their contribution to cancer incidence is noticed. Preventive measures and awareness campaigns are indispensable to reducing breast malignancy.

21.    Collaborative Group on Hormonal Factors in Breast C. Breast cancer and breastfeeding: collaborative reanalysis of individual data from 47 epidemiological studies in 30 countries, including 50302 women with breast cancer and 96973 women without the disease. Lancet. 2002; 360:187-95.