Beliefs and knowledge of osteoporosis amongst female graduate students in Karachi, Pakistan: A cross-sectional study

Objective: To assess the knowledge, belief and preventive measures taken regarding osteoporosis by students of different non-medical educational backgrounds.

Methods: The descriptive cross-sectional study was conducted from January to March, 2018, at one private-sector and two public-sector universities in Karachi, and comprised female participants aged >15 years from engineering, commerce, social and pure sciences background.  Osteoporosis Knowledge Assessment Tool questionnaire was self-administered to collect data which was analysed using SPSS 23.

Results: There were 400 females with a mean age of 20.55±1.66 years. The overall mean score was 46.49±12.83 and 43(10.8) subjects had a good score, 204(51%) had an average score and 150(37%) had a poor score regarding knowledge about osteoporosis.  Also, 186(47%) subjects identified previous studies as their source about osteoporosis, 103(26%) gained knowledge by health professionals and 62(16%) did it through electronic media. The knowledge on risk factors, protective factors and perceived susceptibility were significant (p<0.05) when compared by type of study and age.

Conclusion: The knowledge of the disease was found to be insufficient, indicating need for generating awareness regarding osteoporosis.

Osteoporosis is a systemic disorder of the skeletal system manifested by a decrease in bone mass and an increased risk of fracture.1 It affects both genders, but women are more prone towards osteoporosis, especially after menopause.2 However, osteoporosis can be prevented if the person attains peak bone mass while the bones are growing, maintaining it during adulthood and avoiding the loss in old age.1 Risk factors that can cause primary and secondary osteoporosis include age, family history, menopause, old age, deficiency of vitamin D, sedentary lifestyle, low body metabolic index (BMI) and paralysis.3

Pakistan holds 5th position across the world for people with osteoporosis.4 It is estimated that about 9.9 million people have osteoporosis, of which 7.2 million are women. By 2020, it is expected that this will rise to 11.3 million and 12.9 million by 2050.5 According to a survey, 72% Pakistanis lead a sedentary lifestyle, and 83% of women in Pakistan have a vitamin-D deficiency.5

Young women in Asia compared to the West are more prone to osteoporosis, and, by 2050, around half of osteoporosis cases will occur in Asia.6 Osteoporosis knowledge is one of the contributors to osteoporosis-preventative behaviour.7 A study among women aged >25 years in the United States showed limited knowledge regarding osteoporosis.8 Similarly, Asian women living in Australia had limited knowledge regarding osteoporosis with low calcium (<800mg/day) intake.9 According to a 2011 study, the average consumption of calcium among Pakistani population was <50% of the daily requirement.10 Although one study conducted in Pakistan reported that women do know about osteoporosis, they failed to convert this knowledge into practice for prevention.11 Therefore, it is essential to know about the current status of knowledge, beliefs and practices regarding osteoporosis among young women from different educational background so that effective future preventative strategies can be developed. The current study was planned to assess the knowledge, belief and preventive measures taken by students of different non-medical educational background in an urban setting.

The descriptive cross-sectional study was conducted from January to March, 2018, at one private-sector and two public-sector universities in Karachi, and comprised female students. After approval from the ethics review committee of Hamdard College of Medicine and Dentistry, Karachi, the sample size was calculated based on the approximate prevalence of 50% osteoporosis information at 95% confidence interval (CI) with 0.05 bound error using Raosoft® calculator.12 However, the sample was expanded by 5% for more precise results.

Those included were female students aged >15 years pursuing undergraduate studies in life sciences zoology and botany, engineering, commerce and arts.  Those aged <15 years, studying medicine-related professions, not able to communicate properly, did not wish to participate, or had participated in any activity or programme related to osteoporosis during the preceding six months were excluded. After taking consent from the participants, the pretested self-administered osteoporosis knowledge assessment tool (OKAT) questionnaire13 was used to assess knowledge and beliefs of the subjects towards osteoporosis. The questionnaire included 20 questions to determine various aspects of knowledge about osteoporosis.  It included possible risk factors, preventive strategies, identification of disease and treatment availability.  Each item had 'true' 'false' and 'don't know' options.  Each correct response was scored 1, while incorrect and don't know were both scored as 0. The total score out of 20 was multiplied by 5 in order to generate a total out of 100. The criteria was set as follows: < 20: very poor, 20-40: Poor, 41-60: Average, 61-85: Good, 86 or more: Very good. Socio-demographic information, such as age, mother tongue, history of previous fractures and family history of osteoporosis, was also collected.

Data was analysed using SPSS 23. Descriptive data was reported as frequencies and percentages.  Cross tabulations were performed between the type of studies and age of the participant, and Chi-square test was used for analysis of categorical variables where appropriate. Fisher's exact test was used when the expected value was less than 5.  P<0.05 was considered statistically significant. 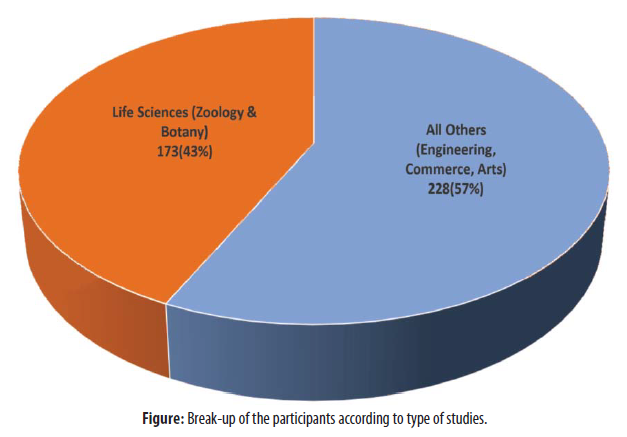 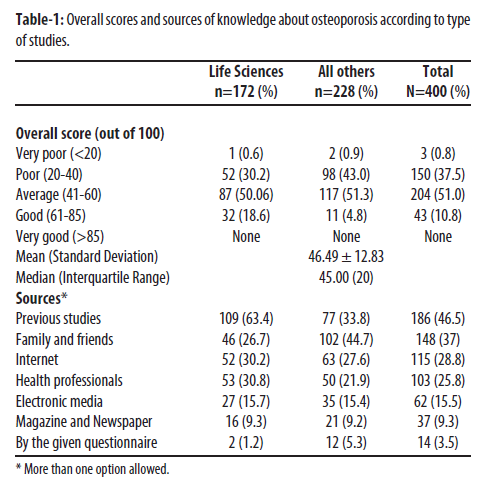 Also, 186(47%) subjects identified previous studies as their source about osteoporosis, 103(26%) gained knowledge through health professionals and 62(16%) did it through electronic media. The knowledge on risk factors, protective factors and perceived susceptibility were significant (p<0.05) when compared by type of studies and age (Table-2). 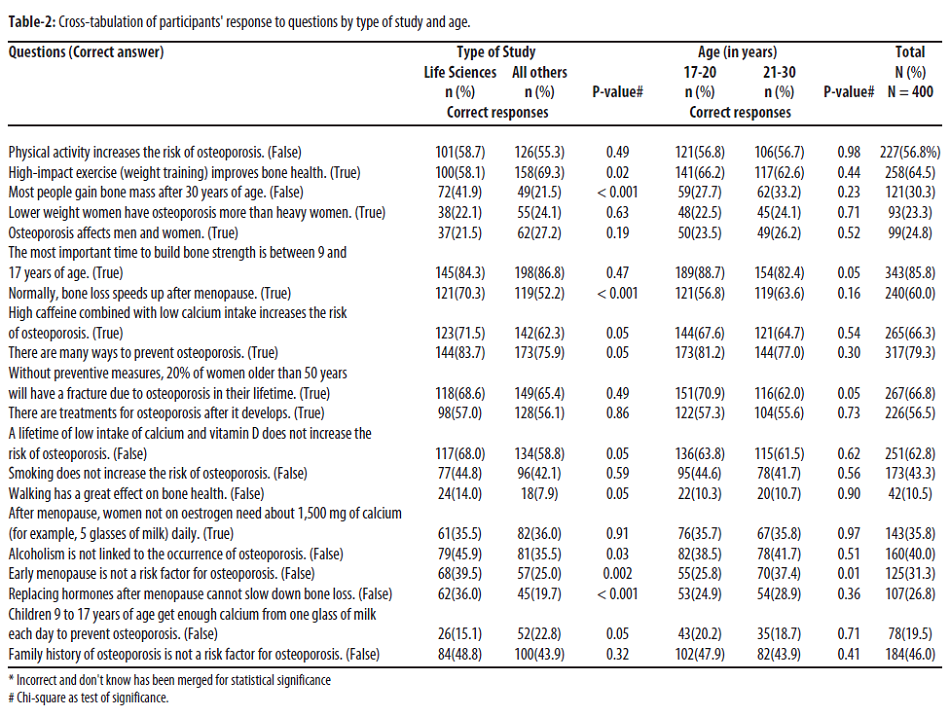 Life Sciences students were found to be significantly better than students from other faculties (p<0.001).  A higher number of correct answers were found in 12 of 20 questions among participants aged 17-20 years than the older age group, but only two questions were statistically significant (p<0.05) when compared for age.

The current study revealed limited knowledge of osteoporosis among non-medical students, and only 43(10.8%) of the total participants obtained a good score (65-85) on the knowledge questionnaire. Similar results were registered among previous studies done in Pakistan11 and Sri Lanka.14 Surprisingly, both studies indicated that medical students had less knowledge of osteoporosis than non-medical students. Another survey comprising women in Quetta revealed a further decrease in the average knowledge scores of 13.01±2.9.15 This could be attributed to regional differences in awareness relative to the different programmes of study. It is therefore important to emphasise the risk factors of osteoporosis for a better prevention of disease.16

The current study reported lack of awareness regarding tobacco as a risk factor for osteoporosis.  This is similar to an earlier study,10 but one study11 reported seriously low awareness in this regard. It reflects that Pakistani women, regardless of their academic background, have little knowledge of this particular aspect.

According to the present research, family and friends were the second most important source of information. Other studies have shown the same facts.7,16 The current study revealed that healthcare professionals were the fourth major source of knowledge about osteoporosis, which means that they did not have a key role to play and did not have an impact on the understanding of osteoporosis. It may be due to the fact that, among nurses and other health professionals, they themselves are not well educated about the disease, as stated earlier.15

Only 68(39.5%) Life Sciences students and 57(25%) students from other faculties reported early menopause as a risk factor for osteoporosis.  A similar result has been reported in another Pakistani study.15 Women are expected to be well versed in this dimension at least. However, a greater awareness of modifiable risk factors was found in this study compared with non-modifiable risk factors, which was a finding similar to another study.17

It is alarming to note that the vast majority of students were unable to identify osteoporosis as a health threat to women, but similar results have been reported from Syria and Malaysia.2,3

Although the majority of participants in this research were aware of the benefits of calcium intake and exercise in the prevention of osteoporosis, this benefit was poorly interpreted in children's calcium intake. Similar results have been reported earlier.2

Students with non-medical background lacked awareness and knowledge of osteoporosis and its preventive practices.  The role of electronic media, internet and health education amongst Pakistani women is minimal.  Intervention projects to improve awareness among young people to avoid osteoporosis should be planned. This long-term strategy may help to reduce the increasing incidence of osteoporosis in Pakistan.

Need of the hour: Finding alternatives to a centralized Emergency Medical Services (EMS) system in Pakistan

Community-wide mask-wearing: A realistic approach amidst the second wave of Covid-19 in Pakistan

Rolling out COVID-19 vaccine: Half the battle won