Methods: The retrospective study was conducted at the Aga Khan University Hospital, Karachi, and comprised data of patients who underwent either pharmacological or exercise stress myocardial perfusion scan and had a normal scan with ischaemic electrocardiogram changes between January 2013 and December 2014. All cardiac events, including angina, myocardial infarction, heart failure, coronary revascularisation and cardiac death, as well as non-cardiac deaths were noted.  Data was analysed using STATA 14.2.

Results: Of the 2770 patients whose data was initially checked, 296(10.6%) developed ischaemic electrocardiogram changes during the stress test but had normal myocardial perfusion scan. Of them, 181(61%) patients were male, and the overall mean age was 62±15 years. Follow-up data was available for 280(94.5%) of these patients, with a mean follow-up of 48±7 months. Of these patients, 8(2.8%) died, and 1(0.3%) of them died due to inferior wall myocardial infarction. Myocardial infarction was found in 2(0.7%) patients, and 1(0.3%) patient was hospitalised with heart failure. Also, 12(4.3%) patients underwent revascularization for stable angina, 9(3.2%) underwent percutaneous transluminal coronary angioplasty, and 3(1.07%) needed coronary artery bypass grafting.

Conclusion: Ischaemic electrocardiographic changes during stress testing in patients with normal myocardial perfusion scan were not associated with adverse outcomes, and the risk of cardiovascular events was relatively low for an intermediate follow-up period.

Ischaemic heart disease is one of the leading causes of death in Pakistan.1

The risk of death and myocardial infarction (MI) is approximately 1% in both United States and Pakistan in patients with normal MPI.2,3 Several studies have shown that in single-photon emission computed tomography (SPECT) MPI with exercise stress testing, ECG changes alone have no significant effect on diagnostis and prognosis.4-8 Years ago, studies suggested that ECG changes during vasodilator infusion with normal MPI predict increased risk of future cardiac events.9,10 However, subsequent studies demonstrated contradictory results.11,12 Previous studies proposed that electrocardiogram (ECG) changes with normal MPI revealed poor prognosis in the MPI with a dobutamine stress test.13,14

The retrospective study was conducted at the Aga Khan University Hospital (AKUH), Karachi, and comprised patient data from January 2013 to December 2014. Data was retrieved after getting approval from the institutional ethics review committee. Data collected related to patients who underwent either pharmacological or exercise stress MPI at AKUH during the specified period. Data of only those patients were included who developed Ischaemic ECG changes during the stress, but had normal MPI. Ischaemic ECG changes were defined as horizontal or down-sloping ST-segment depression of >1mm at 60ms after the J point, or up-sloping ST depression of >1.5mm at 80ms after the J point.15 Patients with baseline ECG changes and abnormal scans were excluded.

The sample size was calculated to achieve 80% power at 5% level of significance with a non-response rate of 10%.

As a general protocol, all patients had been kept nil-per-oral (NPO) for 6 hours before stress MPI and had been asked to withhold anti-anginal medications, like nitrates, beta-blockers and calcium channel blockers, as well as caffeine-containing food and drugs 24 hours before testing. The ECG and vital signs were monitored before and during the test.

All patients had then undergone a symptom-limited exercise tolerance test (ETT) using the Bruce protocol.16 At peak exercise, with at least 85% age-predicted heart rate or upon the development of symptoms, Tc-99m tetrofosmin was given, and the patient was made to continue exercising for one minute post-injection.

Dipyridamole was administered at a standard infusion rate of 0.56mg/kg intravenously (IV) over 4 minutes. The radiotracer was injected 4 minutes after the completion of dipyridamole infusion.

Dobutamine was infused at standard protocol with incrementally starting at a dose of 5-10mcg/kg/min, which was increased at 3-minute intervals to 20, 30 and 40mcg/kg/min. Radiotracer was injected at peak heart rate with dobutamine infusion continuing for 1 minute following tracer injection.

Image acquisition and processing were performed within the guidelines of the American Society of Nuclear Cardiology.17 All patients underwent a 1-day study protocol, one image taken at rest, and one image taken after 15-30 minutes of exercise and pharmacological stress.

Follow up was performed by reviewing hospital medical records and patients whose records were not available were also contacted via telephone to get information about their medical status and occurrence of any cardiac event till date.

For inferential analysis, two groups of patients, exercise and pharmacological, were compared for all their characteristics using chi-square test for qualitative variables with >5 cell frequency, Fisher's exact for qualitative variables with <5 cell frequency, and z-test for proportions was used to compute the difference. P<0.05 was considered significant. 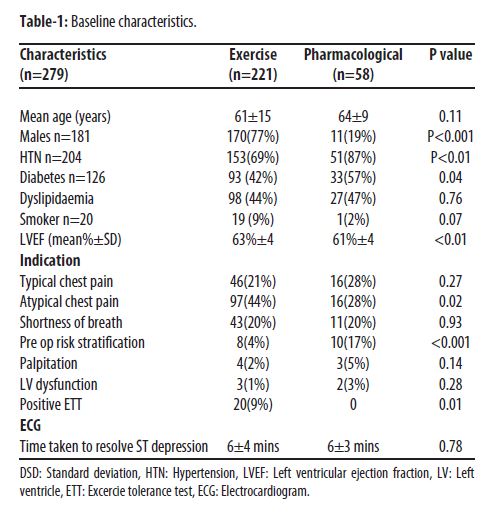 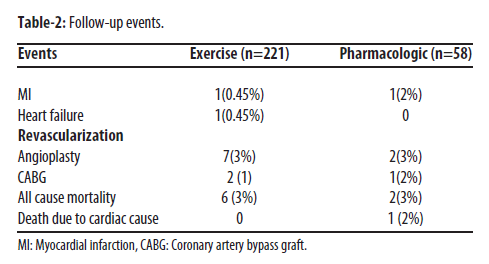 One (0.3%) patient who had heart failure was later found to have non-ischaemic valvular heart disease on echocardiography. Further, 11(3.9%) patients underwent coronary revascularisation, 8(2.8%) had coronary angioplasty and 3(1.07%) had coronary artery bypass grafting (CABG). The incidence of all-cause mortality was 8(2.8%); 2(25%) each related to sepsis and cancer, and 1(12.5%) each related to inferior ST-elevation MI (STEMI), ischaemic stroke, acute renal failure and road traffic accident (RTA) not related to any cardiac cause.

To the best of our knowledge, this is the first study from Pakistan exploring the prognostic value of ischaemic ECG changes during both pharmacological and exercise stress test with normal MPI. The study demonstrated that the combination of ischaemic ECG changes during stress and normal MPI was not common. However, it was more common than reported in literature.9-11 In our study, most patients with ECG changes during stress and normal MPI were men. This is also different from previous studies in which ischaemic changes were more common among women.9,10,12 This difference could be because of the fact that fewer women are referred for stress MPI in Pakistan due to cultural factors. By looking at the number of patients who had hypertension (73%) and diabetes mellitus (45%) in this study, it can be said that this was mainly an intermediate-risk population.

During the follow-up, the number of patients who developed MI, HF or cardiovascular death was low, and, similarly, the incidence of cardiovascular mortality was very low. It indicates that the ischaemic ECG changes had low prognostic value in the presence of standard MPI, with either exercise or pharmacological stress test. Previous studies showed conflicting results in these patients.8-11 During a pharmacological stress test, the ST-segment depression is thought to represent myocardial ischaemic secondary to coronary steal. In the setting of normal perfusion images, this can only occur if there is a perfectly balanced decrease in perfusion in the coronary arteries. This mechanism is called balanced ischaemia. Balanced ischaemia might have been the reason behind normal images despite ischaemic ECG changes during stress. However, by showing a low incidence of cardiac events, the current study did not favour the concept of balanced ischaemia in these patients on intermediate follow-up.

In terms of limitations, the present study was a single-centre retrospective cohort, and its findings cannot be generalised.  Multi-centre studies with larger sample size are recommended.

Ischaemic ECG changes during pharmacological or exercise stress with normal MPS did not add prognostic data to perfusion images.